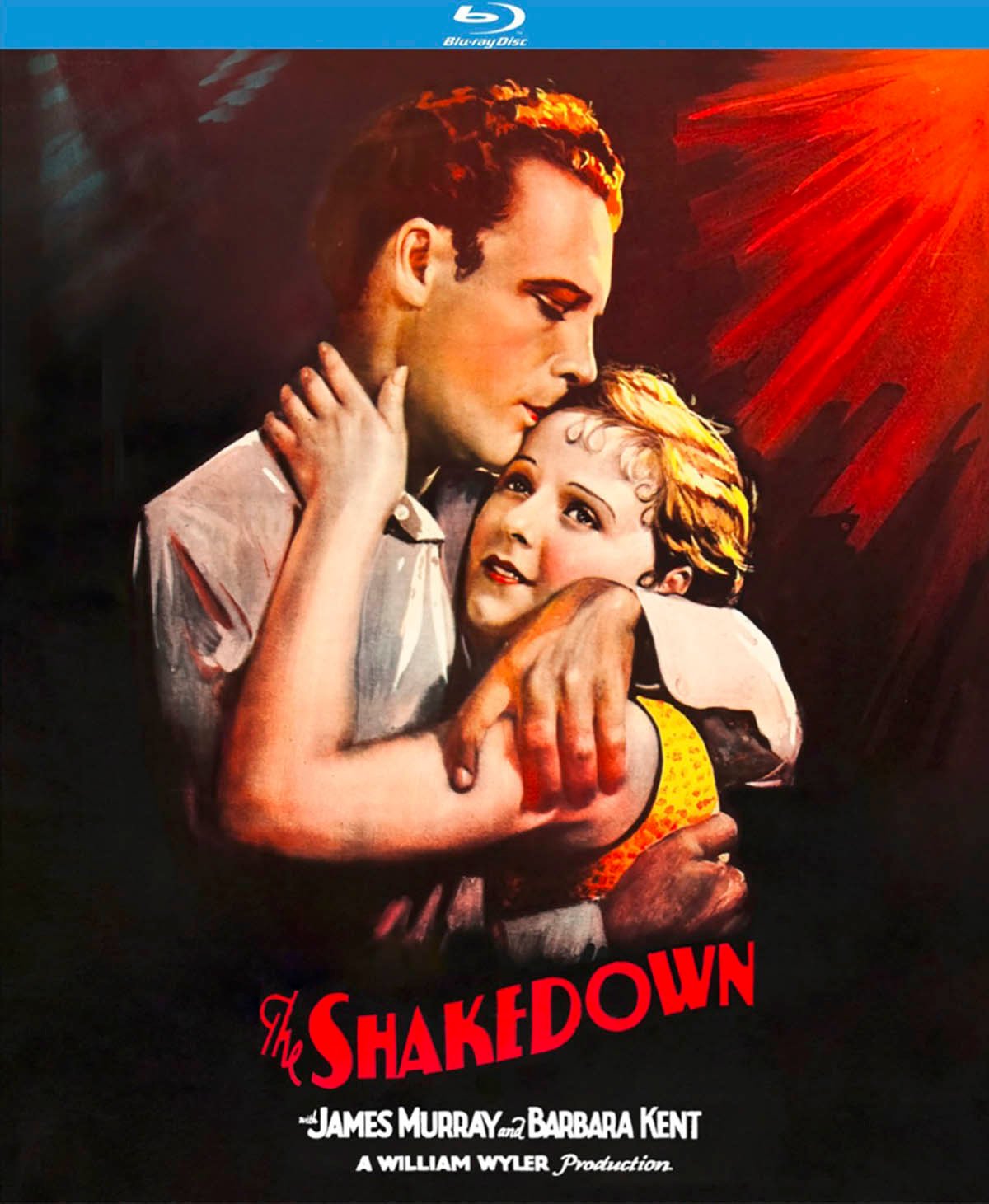 William Wyler’s 1929 silent film The Shakedown is a boxing drama that staves off the saccharine sentimentality of a tried-and-true redemption story with its ribald sense of humor and hard look at its working-class milieu. The action opens in a smoky pool hall, where pretty boy Dave Roberts (James Murray) convinces patrons that he can’t be punched before storming out the door to save a damsel in distress from a brawny meathead boxer, Battling Roff (George Kotsonaros). We soon learn, though, that Dave isn’t much of a hero and all that commotion was part of a scam cooked up by Roff and his manager (Wheeler Oakman) to sucker locals into betting their drinking money on Dave, who’s been paid off to take a dive in the second round of an upcoming match with Roff.

It’s a classic con that these men have been executing in small towns across America’s heartland, and Dave’s all-American looks and swagger make him the perfect hustler to keep their operation going. His willingness, however, to continue playing the fall guy is tested as he grows increasingly attached to the latchkey kid, Clem (Jack Hanlon), who he saves from a passing train. It’s a baldly manipulative ploy straight out of a cheap melodrama that the filmmakers punch up by giving Clem a resilience and abrasiveness that keeps the audience’s pity and sorrow at bay. He’s sympathetic, sure, but he’s also a petty thief with quite the hot temper, as Dave’s “trainer,” Dugan (Harry Gribbon), who often finds himself the victim of the boy’s slingshot or angry parade of silly faces, can attest to.

Clem is something of a more youthful, slightly less corrupted version of Dave, as underlined in a scene where Clem reveals that he used loaded dice to swindle locals out of a few bucks. In a cut to a close-up of Dave, Wyler highlights the conflicted nature of his protagonist’s reaction, finding him simultaneously horrified and proud that the boy is already so streetwise at such a young age. This pairing of a surrogate father and son has all the makings of a hokey subplot, but Wyler diminishes the mawkish nature of their bonding by clarifying that Dave is using the boy, as well as a local woman, Marjorie (Barbara Kent), who’s taken a liking to him, as a way to garner more support, and as such more bets, for his next match with Roff.

The narrative’s trajectory is every bit as predictable as the results of Roff and Dave’s fights, but Wyler makes Dave’s redemptive journey as tough as it is thrilling, with an extended and invigoratingly brutal boxing match that sees Dave atone for his sins by staying in the ring and surviving the pugilistic fury of the enraged Roff. Employing an impressive range of visual tactics, such as whip pans, rapid cutting, and superimpositions, Wyler gives Dave’s transformation from fraud to champ a striking dynamism. At just 65 minutes, The Shakedown moves as swiftly as a well-trained boxer, and while the director would certainly go on to make better films, this early silent effort displays a keen understanding of the medium and the ability to wring genuine emotion and excitement out of wholly mediocre material.

For this Blu-ray release of The Shakedown, Kino Lorber has sourced Universal’s recent 4K restoration of the film from a 35mm duplicate negative. There are stretches, particularly during much of the first reel, where scratches and debris are evident, and one can only assume that, given that the film was lost for nearly 70 years, the damage to the negative was too severe to be completely removed digitally. Still, even these rougher patches look gorgeous, boasting an impressive contrast ratio, with strong black levels and an abundance of grain that retains the soft, textured look of celluloid. Image clarity is also very good, as there are no signs of motion-blurring during the constant, rapid movements during the film’s boxing matches. The disc contains only the silent version of the film (the sound version is still lost), so the only audio is Michael Gatt’s electronic score, which sounds great.

On his commentary track, film critic Nick Pinkerton covers a lot of ground in 65 minutes, touching on the careers of all of the film’s major players, Universal’s challenging transition to sound, and William Wyler’s transition from short westerns to feature filmmaking. Most interesting is his discussion of the many tropes and traditions that inform the film, from, most obviously, the boxing picture, to the American grifter and the pairing of a latchkey kid with a rough-edged father figure. Kino has also included a booklet with an essay by writer Nora “The Nitrate Diva” Fiore in which she details the ways in which Wyler injects life into a fairly familiar story, through both his actors’ performances and his camerawork.

William Wyler’s flawed yet fascinating The Shakedown offers a look at a future Hollywood master in the nascent stage of his career.