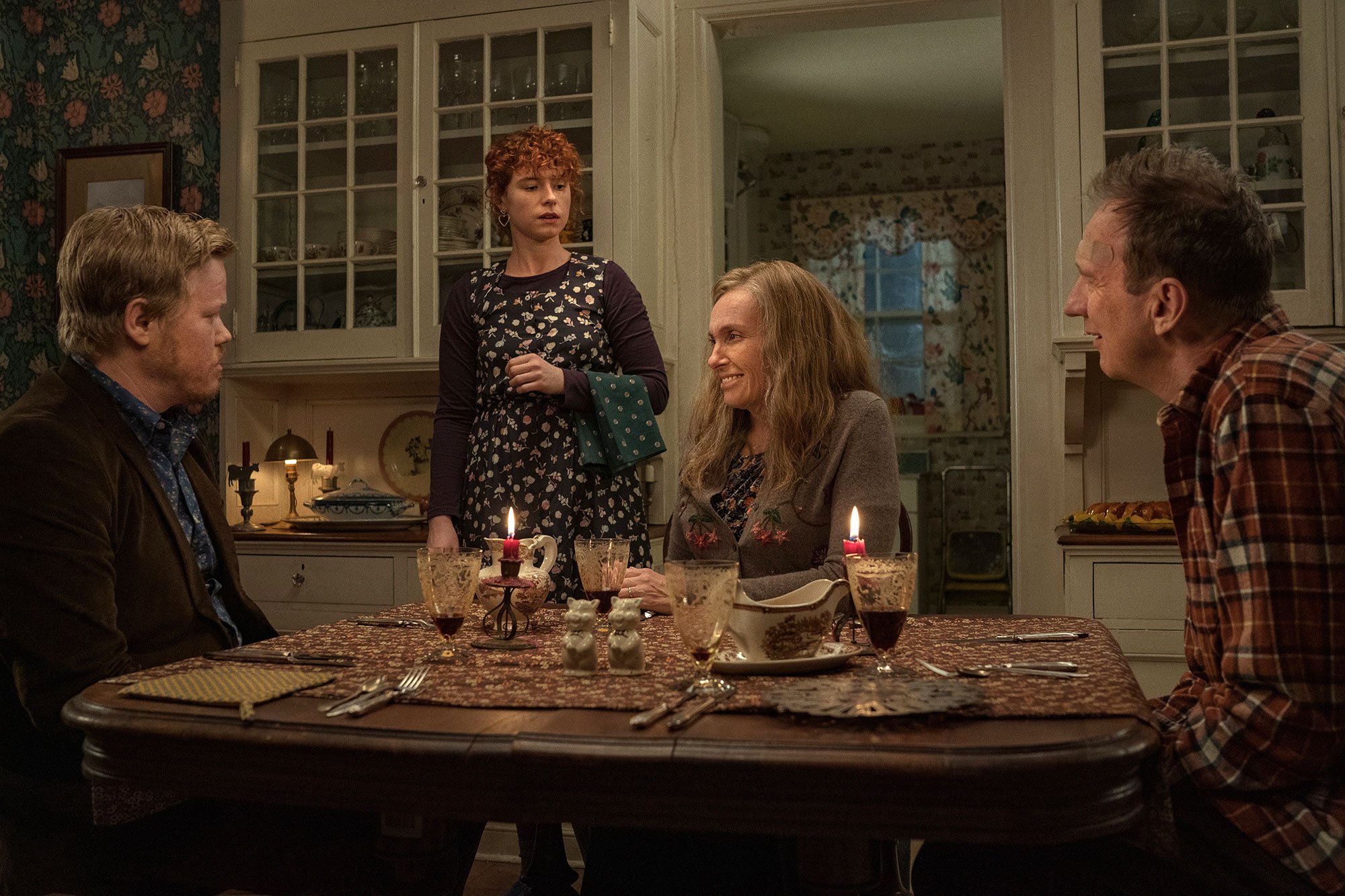 Charlie Kaufman’s I’m Thinking of Ending Things is relentlessly dour and controlled right out of the gate. Over a montage of spare, lonely, fussy images—ugly wallpaper, an empty yard, a wintry town—an unnamed young woman (Jessie Buckley) announces in voiceover that she’s thinking of “ending things.” Given the morose aesthetic, and Kaufman’s ongoing determination to surf ever-rising tides of hopelessness with every project, we’re purposefully led to believe that the woman is contemplating suicide. Instead, she’s thinking of leaving her melancholy boyfriend, Jake (Jesse Plemons), with whom she’s traveling to have dinner with his parents, Mother (Toni Collette) and Father (David Thewlis), in rural Oklahoma. Instead of breaking up when they should, they have a reality-shattering road trip from hell.

The notion of a road trip as a springboard for a lonely intellectual’s existential crisis brings to mind Ingmar Bergman’s Wild Strawberries, and there’s quite a bit of David Lynch here too, especially as past, present, and future narrative strands merge to suggest that we are watching a character’s recollection of events, perhaps during a death rattle. Bergman and Lynch are sensualists though, and despite their reputation as purveyors of challenging cinema, they’re often wickedly funny. Sensuality and humor weren’t always alien to Kaufman, as evinced by his scripts for Being John Malkovich, Adaptation, and Eternal Sunshine of the Spotless Mind. But they were directed by Spike Jonze and Michel Gondry, respectively, who laced Kaufman’s virtuosic acidity with a sense of propulsion and playfulness—a giddiness of formal invention. By contrast, Synecdoche, New York, Anomalisa, and I’m Thinking of Ending Things, as well as his recent, sometimes uproarious novel Antkind, are pure, undiluted Kaufman.

As a writer-director, Kaufman distrusts conventional engagement. He wants his audience to feel the passing of time as experienced by narcissists who belatedly realize how much life they’ve allowed to get away from them, as well as the profound disconnection suffered by those trapped in their own heads—an idea that Being John Malkovich virtually literalized. Synecdoche, New York and I’m Thinking of Ending Things have the most in common in this respect, as they’re both punishingly prolonged films in which years sometimes appear to pass by in seconds—a startling trick of editing that perhaps intentionally grows old. It appears that Kaufman wants his films to wear his audience down, empathetically placing them in the emotional realms of his protagonists. Anomalisa is sharper, clearer, and more succinct because Kaufman had a high-concept formal gambit to latch onto—the characters are played by puppets—perhaps freeing him of having to grind his theme into the pavement.

I’m Thinking of Ending Things certainly traps us. The film’s first big sequence is the road trip to Jake’s parents’ house, in which he and the young woman wield their erudition against one another while a snow storm threatens to strand them. As in Antkind, the dialogue here is dense with literate references, which somehow manage to function as pretentious parodies of pretension. William Wordsworth is evoked, as are Benito Mussolini’s trains, and there’s a riff on suicidal insects that connects to one of Kaufman’s governing concepts: that ideas, especially asinine Hollywood clichés, are capable of fighting to live on in the manner of most animals, in this case taking root in our brains. This notion is reasonable—many of our most insidiously bad myths about relationships are reinforced by Hollywood romances—but in a film this scrambled and willfully devoid of pleasure it also feels self-congratulatory. This sequence lasts nearly 20 minutes, and as Jake and the young woman talk on and on, you may want to desperately get out of this car—an impression that Kaufman exacerbates through jagged editing and tense, mysteriously unmotivated camera angles.

Though the young woman’s profession and interests change every other scene or so—she’s alternately a poet, a physicist, and a painter—one constant is her interest in films, and her riff on cinematic formulas is challenged by a second narrative featuring an elderly, heavy, and, of course, sad high school janitor (Guy Boyd). In the most moving scene in I’m Thinking of Ending Things, the janitor has his lunch at work alone and watches the climax of a corny Hollywood movie in which a young server professes his love to a co-worker in the restaurant in one of those grand speeches that never happen in real life. As purposefully ludicrous as the parody is, Kaufman’s too talented not to sell it anyway; it’s authentically poignant, especially in the context of the bleak narrative housing it, representing a moment of escape for the janitor. The young woman’s distrust of formulas, though legitimate, also comes to seem like the callow indulgence of a young, smug, comfortable academic.

The characterization of the young woman may prove divisive, rendering I’m Thinking of Ending Things an uncomfortable date movie. She’s more talented and verbose than Jake, and, as their time together grows more surreal and bleak, she lords those talents over him with increasing ruthlessness. In the second half of the film, on the interminable trip back from his parents’ house, Jake says that he likes John Cassavetes’s A Woman Under the Influence, which the young woman essentially characterizes as a fake-feminist work of masochism, claiming that Gena Rowlands gives an exhausting tour de force, and that “nothing she does is memorable because she does so much.” (That’s a criticism more apropos to I’m Thinking of Ending Things than Cassavetes’s film.) The young woman is elegant and devastating, as she should be considering that she’s passing of Pauline Kael’s words as her own, obliterating any sense that Jake may still have of being her equal. It’s a scene of emotional violence, cloaked in academic pretension, in which the young woman unofficially yet truly ends things.

The film is told from the young woman’s perspective, but it’s really about Jake, who’s yet another symbol of Kaufman’s fear of mediocrity—a fear that’s confirmed by the seemingly endless, overcompensating cultural Easter eggs that pop up here and in Antkind. These references, including a brief shot of Kael’s For Keeps, are subtler than they initially appear to be, as Kaufman gradually reveals both Jake and the young woman to be ongoing slaves to what they admire. The Kael speech is far from the only unacknowledged recitation here, which indicates the unoriginality of the characters and Kaufman as their creator. In case we don’t get it, this Oscar Wilde quote is evoked to help us out: “Most people are other people. Their thoughts are someone else’s opinions, their lives a mimicry, their passions a quotation.”

But really, only Jake is the slave. Without putting too fine a point on it, the version of “the young woman” that we see is filtered through Jake’s recollections from an undefined future, her very namelessness suggesting his remoteness from her. Most of these memories center on Jake’s failure to defend himself intellectually and emotionally, to the young woman and to his broadly ghoulish Mother and Father, who, in the film’s middle section, obliterate his initial façade as a thoughtful academic in the making. As in Lynch’s Mulholland Drive, the horror-movie tropes of I’m Thinking of Ending Things—irrational editing, collapses in time and spatial placement, emphases on a “forbidden place” that reveals all (in this case a basement)—suggest fissures in a psyche. Even the film’s second-to-last image, of a deeply ironic, probably nonexistent celebration, echoes a shot near the end of Mulholland Drive.

The film has a weird, ghostly, even beautiful pull, but it functions mostly on theoretical terms because Kaufman has thought it to death, lingering only on his characters’ miseries and disappointments. If Kaufman had the generosity, for instance, to show what Jake and the young woman might have once seen in one another, allowing for the sort of spark that animated the couple in Eternal Sunshine of the Spotless Mind, this film might’ve been extraordinary—more like a tragedy in the key of Mulholland Drive and less like a dissertation. But Kaufman is content to remain a pain junkie, ruing the fakeness of everything.