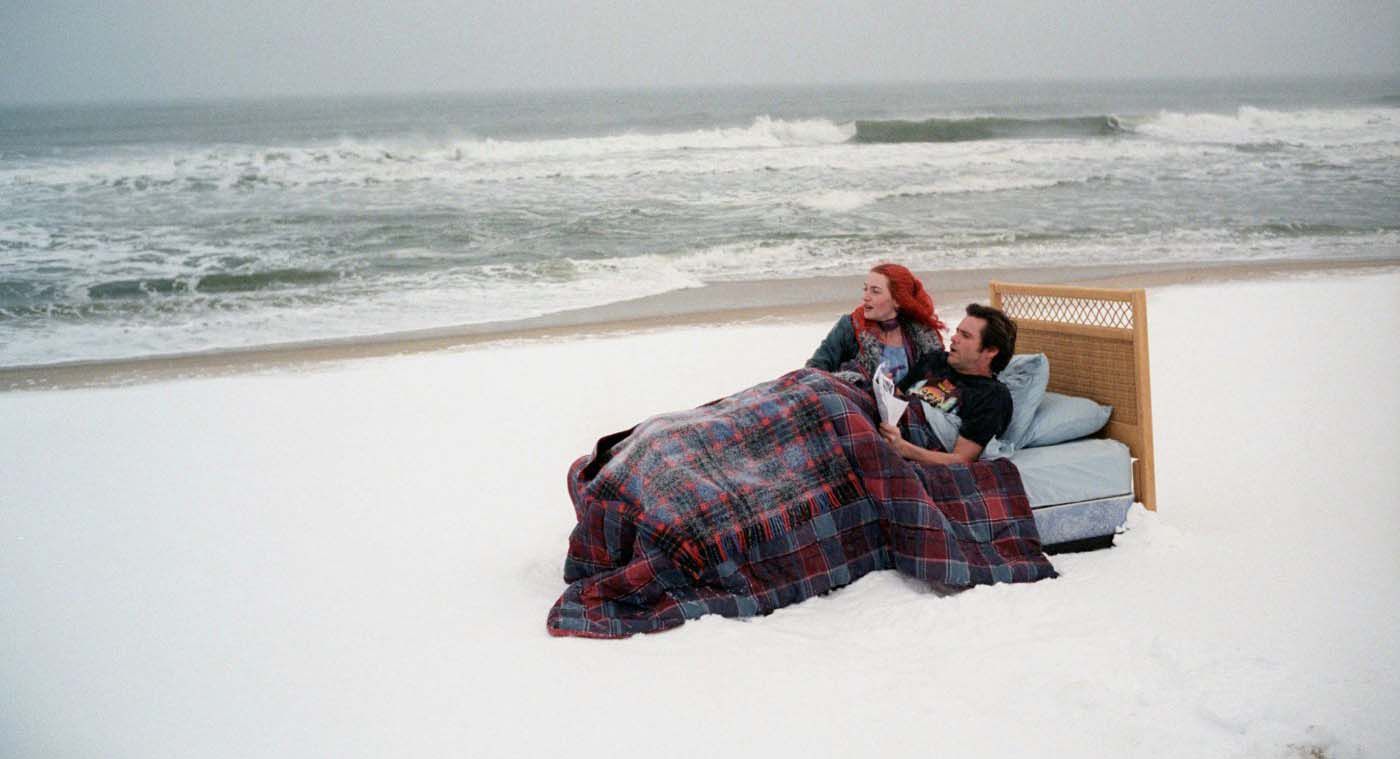 Brilliant music video director Michel Gondry (Björk’s weapon of choice) hits his stride on his second feature, Eternal Sunshine of the Spotless Mind. Human Nature, his first attempt at narrative long-form, was a series of beautiful illusions that never really cohered. Unlike his mentor Spike Jonze, Gondry seemed uncomfortable dealing with actors, garnering colorful but one-dimensional performances from Patricia Arquette and Tim Robbins. Brush all those memories aside, though, because the very hallucinogenic quality of his videos perfectly melds with the director’s seemingly fleeting attention span in Eternal Sunshine, where his faults as a storyteller are directly tied to the film’s strengths.

Working from a Charlie Kaufman script, Eternal Sunshine is less meta than Being John Malkovich and Adaptation. but more reality-bending than your average Philip K. Dick sci-fi procedural. Introverted nice guy Joel (Jim Carrey) hears of an experimental procedure to erase troubling memories, and dives right in when his impulsive girlfriend Clementine (Kate Winslet) washes her brain entirely clean of their love-shattered relationship. As kindly Dr. Mierzwiak (Tom Wilkinson, whose bedside manner and medical detachment is both comforting and dark) and his geek-chic trio of assistants (Kirsten Dunst, Mark Ruffalo and Elijah Wood) put Joel through erasure, the bottom falls out of Eternal Sunshine.

Washed-out realism gives way to vivid splashes of surrealism, and the labyrinth of Joel’s mind becomes an awe-inspiring collage of mad visions. Carrey and Winslet run through self-obliterating landscapes, are jump-cut from various Bergman-style evocations of a deteriorating relationship, and find themselves in apartments crossed with seascapes, larger-than-life Alice in Wonderland kitchens, Escher-like bending walls and Francis Bacon mutations. Joel’s memories go backward in time from the last gasp of their love to their initial spark, but there are sideways detours along the way that take him to infancy and memories of his first childhood humiliation. James Joyce might have applauded this Phil Dick-caustic/Gnostic rendition of his Nighttown from Ulysses, with Clementine as Joel’s face-changing Penelope/Molly Bloom.

Gondry is astute and clever, a technical maestro with the flourish of a choreographer. It helps that he’s working from Kaufman’s most humane script to date. Adaptation.’s touching scenes between Meryl Streep and Chris Cooper got lost in the meta-gobbledygook. But the Carrey/Winslet doomed romance is Eternal Sunshine’s narrative backbone, even as Kaufman errs on the side of the clinical and aloof. He can’t help writing clever, which is fine, but that often leaves characters stranded like chess pieces. That said, there’s a depth and multilayered believability to the refreshingly low-key Carrey (playing the role for drama, not slapstick) and the high-energy Winslet (in a performance as wild as her character’s ever switching hair-dyes).

As the highs and lows of Joel and Clementine’s relationship blip across the screen, sometimes jumping across timelines from the beginning to the end of their relationship in mid-scene, Kaufman tosses in nimble subplots involving the doctor and his crew. Duplicitous and lovestruck Patrick (a decidedly un-Frodo Wood) has stolen Joel’s memories and is attempting to use them to get into Clementine’s pants, and a bizarre unrequited love triangle forms between Stan (Ruffalo), Mary (Dunst) and the doctor played by Wilkinson. Perversions of memory inevitably follow, and Eternal Sunshine begins to contemplate how many of its characters have had bad memories scrubbed clean—how many times, and whether that destroys essential parts of who they are.

Eternal Sunshine is a comedy that has the bracing fright of an identity-crisis horror film. The initial 15 minutes, showing Joel and Clementine meeting for the “first” time and having an attraction they can’t put their finger on, isn’t played cute. They’re both so fried from off-screen memory wipes that they’ve lost most aspects of their personality. It’s an initial note of sweetness and despair as the lost souls attempt to reconnect, and it says something that Gondry and Kaufman don’t rush headlong into their subsequent fantasia. What’s more to the point is their great premise eventually runs out of steam, and like many a Philip K. Dick novel they have a hell of a time wrapping things up at the climax. Eternal Sunshine is too muddled to be a masterpiece, and Gondry still needs to find some kind of consistency even within a kaleidoscopic world like this. But his naked cinematic ambition goes a long way here.

Joel attempts to fight the erasure in his own mind, and Eternal Sunshine admits early on that it’s a fight he cannot win. That he keeps on fighting anyway is the crux of Eternal Sunshine, and a breakthrough for Kaufman—writing about the human condition more than questioning our lives as self-made fictions. The fantasies of Eternal Sunshine are more “real” than anything Kaufman’s written before, because they define who we think we are. Joel rediscovers his love for Clementine through fantasy, which is to say through his clouded memories of her. Such things are precious, and Gondry revels in that world in all its fleeting, flickering, ever-mutating joys.