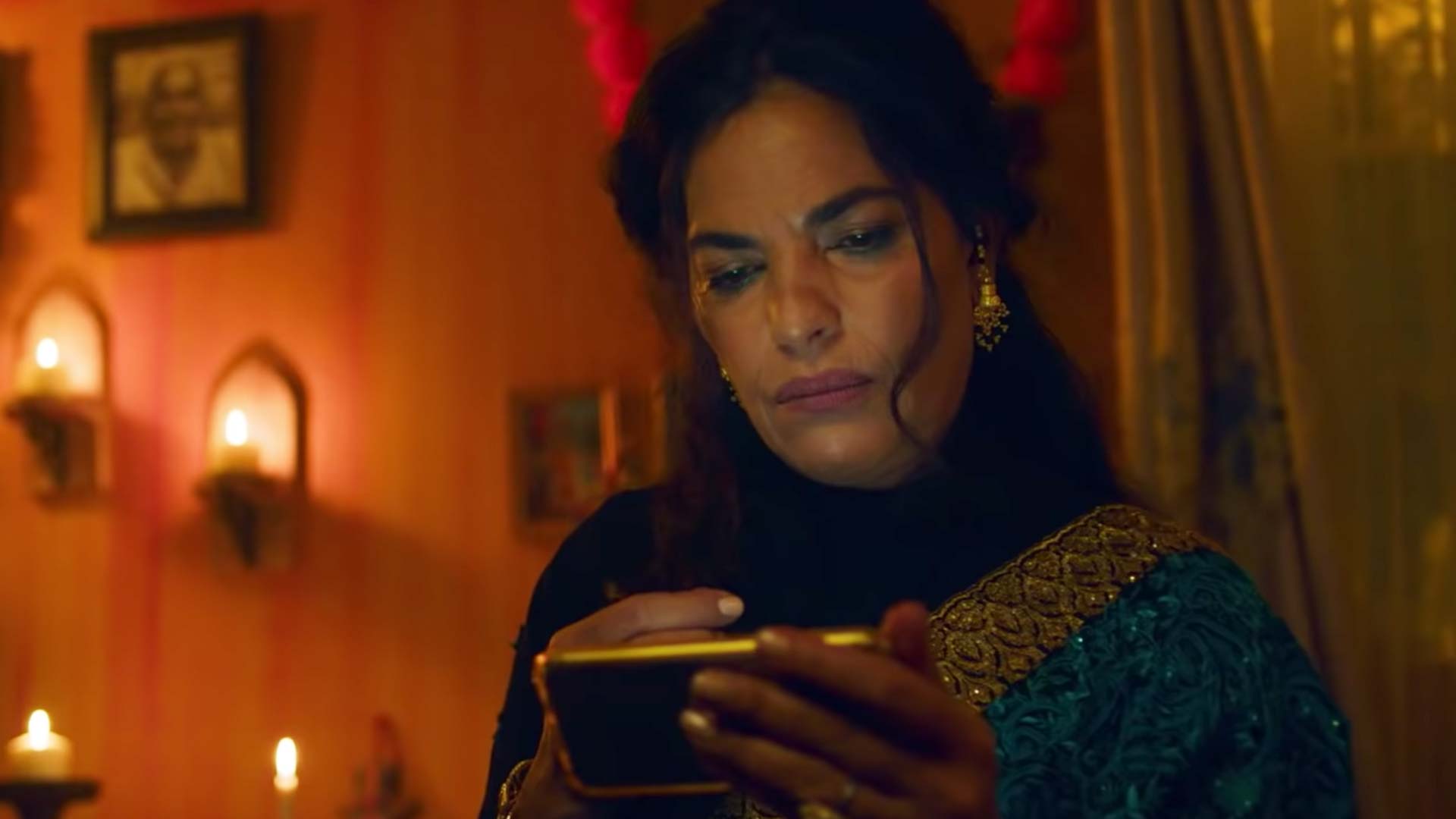 Like another recent Blumhouse release, Veena Sud’s The Lie, Elan and Rajeev Dassani’s Evil Eye appears to prize characterization over lurid gimmickry, as well as suggests a more prestigious gloss on the production company’s brand. Both films set up their central narratives with noteworthy efficiency, only to settle into repetitive holding patterns, as they emulate the pace of domestic dramas while offering scant details about the relationships that are meant to hold our attention. These are thrillers with neither thrills nor much other texture in their place, suggesting first acts that have been stretched out to feature length. In their static determination to seem “serious,” The Lie and Evil Eye will have you missing that spark that drives even bottom-of-the-barrel Blumhouse productions.

In theory, Evil Eye promisingly examines two common divides between parents and children: religious conviction and choice of lovers. Usha (Sarita Choudhury) is an Indian woman who lives in New Delhi with her husband, Krishnan (Bernard White), and who constantly worries about her daughter, Pallavi (Sunita Mani), who lives in America and is adopting Western values, such as staying single through her 20s and disregarding the superstitions of her mother. In the film’s most intriguing formal gambit, much of the narrative is composed of alternating phone calls between Usha and Pallavi, which are fraught with Usha’s endless demands for her daughter to get married. Mother gets her wish when Pallavi meets Sandeep (Omar Maskati), a rich and handsome tech developer who indulges Usha’s protectiveness and is willing to commit to marriage almost immediately. Yet Usha is once again unsatisfied, as she becomes convinced that Sandeep is the reincarnation of a man who once abused her.

These phone calls have an anguished intensity, especially as performed by Choudhury and Mani, who poignantly suggest connectiveness despite appearing in only a handful of minutes on screen together. But the film’s high concept—a parent’s nightmare of how one’s mistakes might be revisited upon a child—is undeveloped. We learn nothing about Pallavi’s relationship with Sandeep, and no guessing game is encouraged pertaining to the young man’s identity. Despite his status and appearance, Sandeep is a charmless cipher, and so the ultimate revelation has no kick of perversity; we don’t feel the betrayal that women feel when a man they love hurts them. And Pallavi isn’t any more compelling. We learn that she’s an aspiring writer who’s empowered by Sandeep’s money to quit her job and resume work on a book, yet that’s all we get on that front. A potentially wicked irony—that Pallavi is drifting into the sort of patriarchal culture that she’s long resisted, which she finds she actually likes—is ignored.

Evil Eye has no set pieces, jokes, or surprises. It asks the viewer to wait for the majority of its running time for Usha to grow hysterical enough to intervene in America on Pallavi’s behalf, which yields a brief, perfunctory confrontation that’s unworthy of approximately 70 minutes’ worth of buildup. The film reminds us that Hollywood has generally forgotten how to mount erotic thrillers, which tap into subterranean feelings of sexual boredom and accompanying paranoia. Adrian Lyne’s Fatal Attraction is considered a sexist relic of the AIDS era, not without good reason, but it was also propulsive, stylish, nasty, and perceptive in pushing taboo buttons. By contrast, Evil Eye is a feast of timidly undeveloped raw material.

Review: Nocturne’s Insights Are Potent, but It Lacks for Searing Imagery

Shithouse Review: A Warm, Funny Side-Eye at Nostalgia That Never Was