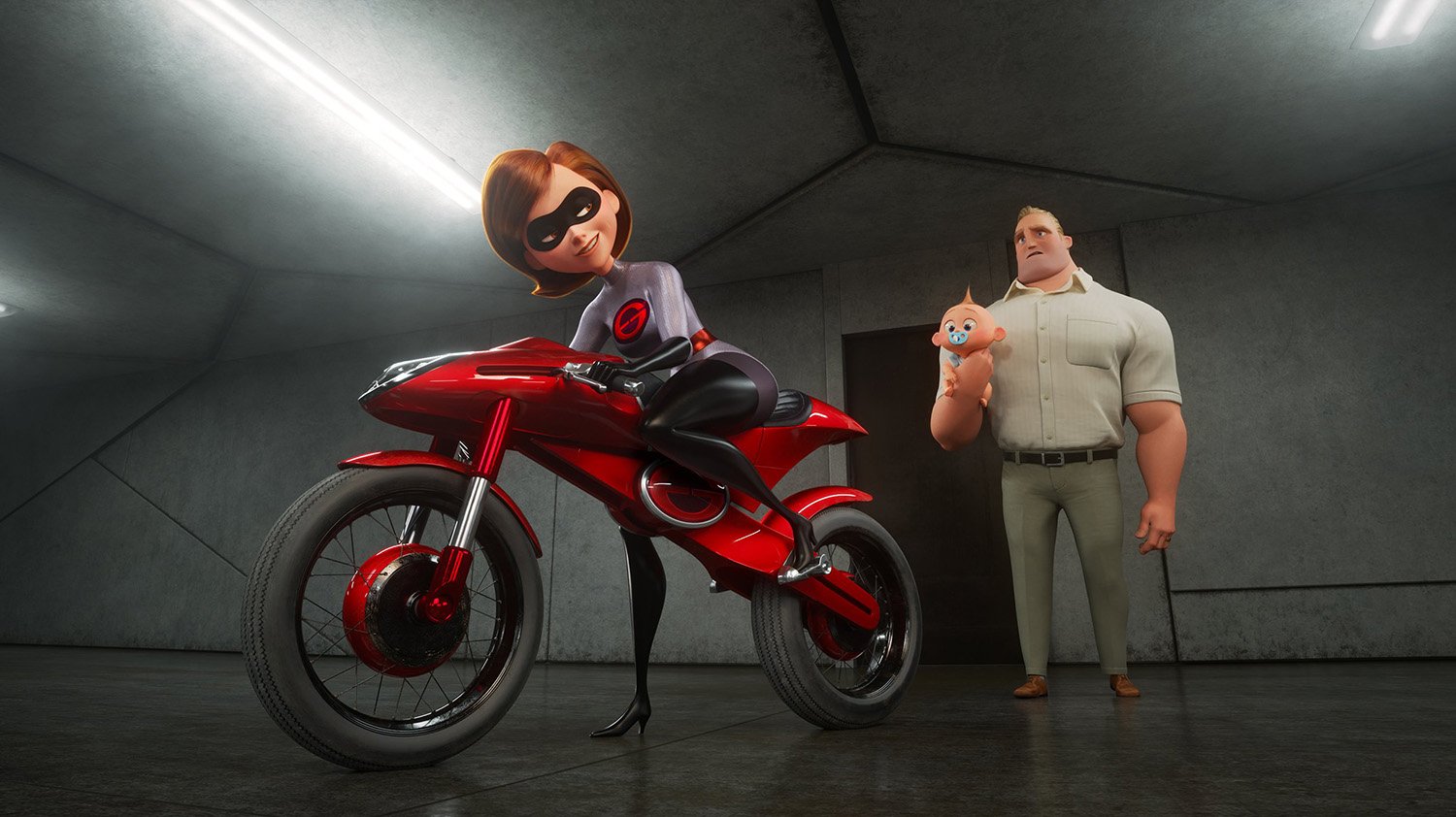 It’s been some 14 years since the release of writer-director Brad Bird’s The Incredibles, and during that time superhero movies have become the heavy-lifters at the worldwide box office. After a ceaseless stream of assembly-line products marketed as vast interconnected “universes,” Pixar’s original film looks almost subversive—a one-off revisionist take on the genre that’s as concerned with the mundane drama of suburban family life as it is with the grandiose world-saving action typical of the superhero movie. Of course, in this age of franchises, sequels, and “pre-awareness,” it was only a matter of time before Pixar went back to the well. And in many ways, The Incredibles was a prime candidate for sequelization: Bird’s film is, after all, essentially an origin story about a group of superheroes who learn to work as a team.

Incredibles 2 immediately sees the Parr family springing into action, facing off against the Underminer (John Ratzenberger), a mole-like super villain who bursts out of a city street in a giant pneumatic drill. Though this opening action sequence picks up exactly where the end of The Incredibles left off, one can easily sense the influence of the intervening decade-plus of Marvel movies in the sequel’s Avengers-style team fights—everyone here has a role and gets a moment to shine in the spotlight—and in the chaotic urban mayhem that’s so characteristic of the Marvel Cinematic Universe.

It’s not long, though, before Incredibles 2 settles into the same laidback rhythm that characterized the original film. After making an expensive mess of things in downtown Metroville, the Parr clan is forced into hiding in a cheap motel, until Helen (Holly Hunter), Bob (Craig T. Nelson), and family friend Lucius (Samuel L. Jackson) are approached by corporate tycoon Winston Deavor (Bob Odenkirk) and his whip-smart inventor sister, Evelyn (Catherine Keener), for a PR mission to revive public support for superheroes and overturn the ban on their activities. The Deavor siblings move the Parrs into swanky new digs, a space-age riff on Frank Lloyd Wrigh’s famous Fallingwater house with precarious high-tech accoutrements—including remote-controlled floors that slide away to reveal pools of water—that could have been pulled out of the garishly chic house from Jacques Tati’s Mon Oncle.

Winston and Evelyn choose Helen, a.k.a. Elastigirl, to serve as the public face of their new project, which forces her to leave her family behind in order to fight crime in the Manhattan-like city of New Urbrem. There she finds herself taking on the Screenslaver (Bill Wise), a mysterious baddie with the power to commandeer technology and hypnotize people to do his bidding. After the Screenslaver causes the city’s new monorail system to malfunction, Elastigirl single-handedly averts disaster in a pulse-pounding sequence whose lithe, springy fluidity easily outclasses the similar train-based action set piece from Ron Howard’s Solo: A Star Wars Story. Meanwhile, Bob is stuck at home looking after the kids, struggling to help Dash (Huck Milner) with his math homework, cheer up Violet (Sarah Vowell) after she’s rejected by a boy, Tony (Michael Bird), and keep up with Jack-Jack’s destructive new powers.

Bob’s resentment at being forced into domesticity forms the dramatic spine of the film. If The Incredibles was essentially a superhero riff on male mid-life crisis, the sequel primarily concerns male anxiety about women taking over traditionally masculine roles. The film also touches heavily on the uncertainty that many women feel about pursuing their dreams at the expense of spending time with their families. These are weighty topics to pursue in an animated action-comedy, and Bird, with a light tone and deft touch, manages to give them their due. This is a fleeter, funnier film than the original, and Bird gets considerable comedic mileage out of Jack-Jack’s wild capriciousness, as evidenced by Incredibles 2’s single most hilarious sequence, in which the Parr family’s youngest uses his multifarious abilities—fire, lasers, multiplying, turning into a gremlin—to battle a feral raccoon just for the hell of it.

Because superhero movies are still male-dominated, it’s refreshing to see a film such as this place a female hero at the center of all its skirmishes. Besides, Elastigirl’s powers are simply more fun to watch in action than everyone else’s; indeed, the animators have a field day with the way she molds herself into various shapes throughout the film. Unfortunately, pulling Helen away from her family makes Incredibles 2’s plotting seem slightly mechanical. As it ping-pongs between displays of Elastigirl’s derring-do and the rest of her family’s domestic worries, the film becomes almost sitcom-like in the way its broken up into clear A and B storylines. It also doesn’t help that the story’s villain is so half-baked, as from the moment the Screenslaver shows up, it’s painfully obvious who’s pulling his strings.

Everything in Incredibles 2 is inexorably driven toward a big final blowout. That sequence is suitably grand and eye-popping, but haven’t we seen all of this before? The Incredibles felt like a genuine novelty way back in 2004. And as Incredibles 2 follows so closely in its predecessor’s footsteps, and in a time when a new take on the superhero genre—from the too-big-too-fail franchises of Marvel and DC to small-scale twists on the formula like Chronicle and Super—arrives in theaters almost weekly, it’s hard not to be disappointed that Bird’s latest is, in the end, just another superhero movie.