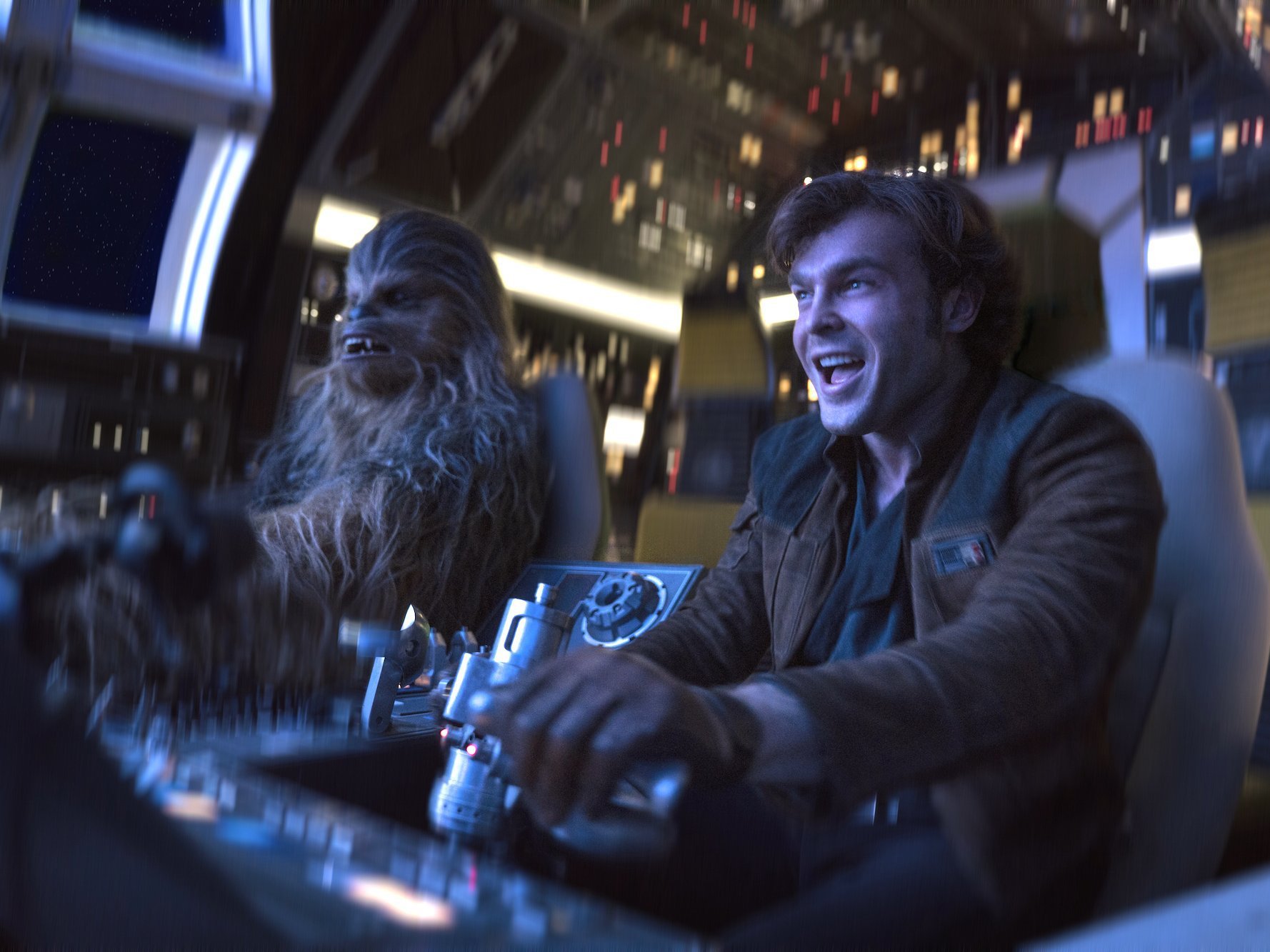 Ron Howard’s Solo: A Star Wars Story lives up to its namesake’s high-risk, higher-reward reputation. Given the unceremonious mid-shoot departure of the original directors—Phil Lord and Chris Miller, whose claims to fame include, lest we forget, a 100-minute toy commercial and a reboot of a beloved 1980s television series—one could hardly be blamed for wondering if Disney’s strategy of releasing at least one Star Wars film per year until the formula was no longer profitable had been accelerated into premature overdrive. After all, the current era’s Disney/Marvel/Lucasfilm/DC studio blockbusters bear less resemblance each summer to actual narratives and more to product demos made of nothing but digital trade-show razzle dazzle.

A malformed fiasco at the level of 2015’s Fantastic Four would at least be more challenging to the viewer than seeing the same film’s corpse successfully re-embalmed every six to 12 months. The imprint of Star Wars on everyday American life now feels so despotic that it’s too much to ask a film like Solo to be moving or thrilling as a piece of cinema. Given the suffocating strictures of fan expectations and the imperial template, the only question is whether it successfully avoids embarrassing the brand—whether, indeed, it works.

For a boardroom executive, there may be no less threatening a pinch hitter in Hollywood than Howard, under whose guidance Solo succeeds well enough at fulfilling this minimum obligation. Lawrence and Jonathan Kasdan’s script adds a few creative doodles to the margins of a beyond-stale template, itself an obvious rip-off of the inciting spectacles of early-20th-century cinema: the war picture, the cowboy shoot-’em-up, the lurid exotica. Solo introduces canonical characters as improbably younger selves, making for a surreal remake-as-prequel: Han Solo (Alden Ehrenreich) and Lando Calrissian (Donald Glover) perform not just as established action figures, but as sly riffs on Harrison Ford and Billy Dee Williams’s performances in The Empire Strikes Back. (Mel Brooks’s Spaceballs could never have guessed the prescience in its kiss-off joke about “Spaceballs II: The Search for More Money.”)

Having escaped his home-planet of Corellia, but not without being separated from his childhood sweetheart, Qi’Ra (Emilia Clarke), Solo begins a long apprenticeship under Tobias Beckett (Woody Harrelson), a petty thief disguised as an imperial officer. Beckett’s crew of rip-off artists includes a wisecracking alien, Rio (voiced by Jon Favreau), and Val (Thandie Newton), Beckett’s sometimes girlfriend. In this transient, filthy new life, Solo’s sole mission is to earn enough to buy his own ship, so he can return to Corellia and find Qi’Ra, but they’re reunited within Solo’s first act, as Beckett and Solo begin doing work for a very unsavory organization Crimson Dawn, lorded over by a space-alcoholinated mercenary named Dryden Vos (Paul Bettany).

Since Han Solo always represented the sneering, cynical flipside to the Skywalker clan’s gee-whiz journey of Jedi self-discovery, spiritual breakdown, and forgiveness, much of Solo concerns its namesake figuring out how to tell actual good guys from the bad ones. This theme is driven home in the film’s worst passages of dialogue, most of them between Solo and Qi’Ra, who ominously assures him she’s not the same girl he once knew. Eventually their association with Vos leads Solo to discover an oppressed desert community, Howard’s film picking up the thread of belabored wokeness that marked The Last Jedi’s most frantic fumbles in the name of political urgency.

The more you remember from the original movies, the more ingenious this maneuver is: spinning the sow’s ear of Lucas’s casually racist outer-space evocations into a silk purse of 21st-century populism, complete with shout-outs to anticolonial freedom struggles and against arms trafficking. Representation indeed leaves an impact, but boycotting Disney would leave a bigger one. It’s hard to say what really results from these corporate winks at global inequality, but they will doubtlessly date the new Star Wars films more conspicuously than any hairdo or hemline from Lucas’s original trilogy.

Solo’s rapport with Lando, whose younger self is revealed as something of a robo-sexual, is the most winning through line of Howard and the Kasdans’ approach. It doesn’t merely make obvious the comfort-food imperative of keeping this mythology alive—which is to say, profitable—but also proves it can still find ways to be legitimately satisfying. It’s not enough to hide the obvious ideological problem of willfully retreating to childhood in the face of real-world problems, nor the consolidated efforts of an unwieldy and arch-conservative private company to make said retreat into a national pastime; Solo’s best moments are almost entertaining enough to make you forget about all that. Otherwise, it feels like what it appears to be: another quarter-billion-dollar installment in the world’s longest and most expensive screensaver. There’s no doubt the abundant computer graphics were already mid-render when the original filmmakers were fired, and so the human components come off as interchangeable as they probably were.

Review: The House That Jack Built