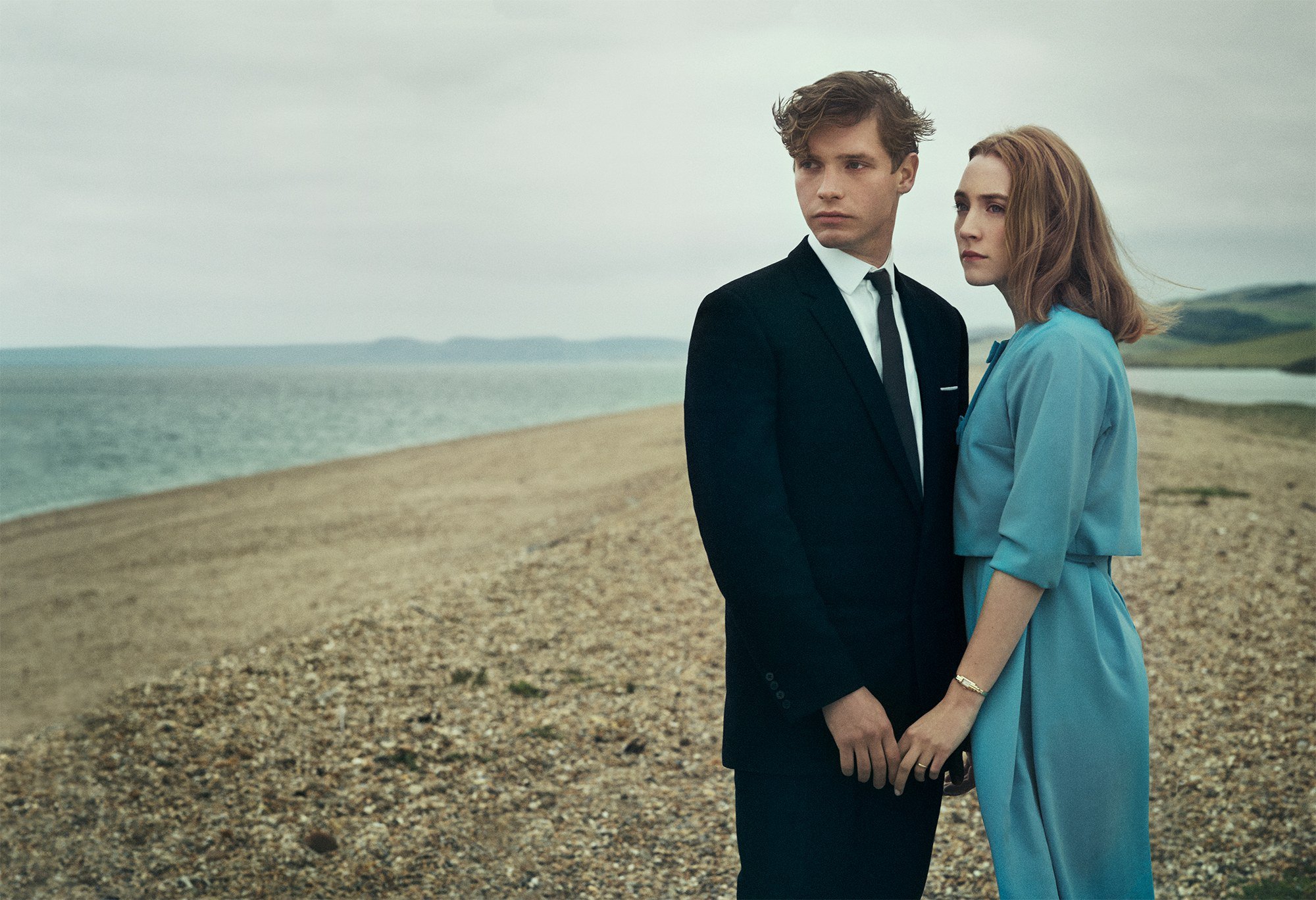 Dominic Cooke’s On Chesil Beach upsets the expectations of a traditional romance by opening on a wedding day. Florence Ponting (Saoirse Ronan) and Edward Mayhew (Billy Howle) are on their honeymoon, and so we know from the outset that they’ve crossed what many romances define as the finish line. With this mechanism of suspense (misleadingly) discarded, viewers are forced to grapple with the emotional, physical, and cultural logistics that Florence and Edward must navigate as a couple. The film is primarily set in Britain in 1962, on the cusp of the Western world’s sexual revolution, and Florence and Edward are shown to be inhabitants of a repressive and puritanical class system, virgins with little access to sexual discourse. Florence is even seen reading one of those hideous old sex manuals, which discusses coitus in terms better suited for describing the dissection of a frog.

On Chesil Beach pivots on Florence and Edward’s attempt to have sex on their wedding night, as they stay at a poignantly odd and stiff hotel on the beach. Having dinner for the first time as wife and husband in their rented room, as the staff sniggers at them behind their back, Florence and Edward suggest children attempting to learn the rules of an adult world. They are unerringly, heartbreakingly polite with one another. Florence wants to skip their overcooked beef and have wine on the beach, while Edward wishes to remain in the room, longing of course for what should theoretically follow this meal. Each is frozen by expectations, personal desire, and the desperation to please the other. By the end of the film, this argument doesn’t seem so minor. Modern audiences won’t feel that this couple has a prayer, as we’re accustomed to handling relationships in the reverse order, working out sexual kinks immediately and then inspecting our lovers for emotional compatibility.

Adapted from a 2007 novel by Ian McEwan, who wrote the screenplay, On Chesil Beach abounds in unexpected details that allow Florence and Edward to gradually come to life, and the audience’s growing respect for the protagonists mirrors their escalating, mutual infatuation. We see flashbacks as Florence and Edward are inspired to reflect by their fumbling in the hotel bed, which Cooke refreshingly doesn’t play for distancing comedy, mining instead the terrifying vulnerability that such moments actually unearth.

The couple is revealed to represent an odd union that’s traditional to romances. Florence is from a prosperous and educated family, while Edward is a less affluent country boy who’s tormented by the aloofness and mental instability of his mother, Marjorie (Anne-Marie Duff). Florence is a control freak, an aspiring classical musician, while Edward is dreamier, though armed with a curious mind that’s engulfed with science journals and wildlife birds. The film’s imaginative daring springs from its willingness to render repression sexy, even if it will prove to be the seed of this couple’s dissolution. Florence and Edward are beguilingly earnest and straightforward with one another, whether Florence is teaching Edward the meaning of octaves, allowing him to experience her rapture with music, or Edward is evincing mock frustration with Florence for failing to tell various bird species apart.

An awareness sets in that Florence and Edward have been making love throughout the entire film, only not in the corporeal terms that we prize to the point of maniacal obsession. They see one another, their insecurities and dreams harmonizing in a kind of emotional symphony that Ronan and Howle play with a rapturous sense of rapport. Florence proves to be adept with Marjorie, giving her a postcard print of Paolo Uccello’s The Hunt in the Forest and inspiring the woman to paint a reproduction of her own. Watching Florence and Marjorie together, Edward flees to the kitchen and weeps. It’s impossible to get to the bottom of such a casually moving moment, in which adoration and shame comingle. Edward is too close to Marjorie—too wracked by his awareness of his mother’s diminishment to reach her. Parallel to this realization, one sees Florence’s magnificent singularity.

By the time that On Chesil Beach circles back to Florence and Edward’s first attempt to have sex, they’re no longer signifiers of various British class systems, but hauntingly full-blooded creations. We also come to suspect that a trap has been set, which reflects McEwan’s occupation with guilt and the fragility of communication and personal identity. Florence offers Edward a test, and his all-too-understandable failure to rise to the occasion mirrors his inability to reach Marjorie as Florence does. Love is a transcendent acceptance that requires a sacrifice of pride—it’s often humiliating work. We say such things to ourselves often without thought or feeling, while looking for love as an affirmation of our individual insecurities. Edward loves Florence and Marjorie, but is to an extent limited by his perception of what they respectively can’t give him. Rejection and acceptance can be insidiously indistinguishable siblings, particularly when vision is muddied by pain. In our defensive fealty to convention, what do we squander?

Interview: McCaul Lombardi on the Hustle of Acting and Sollers Point