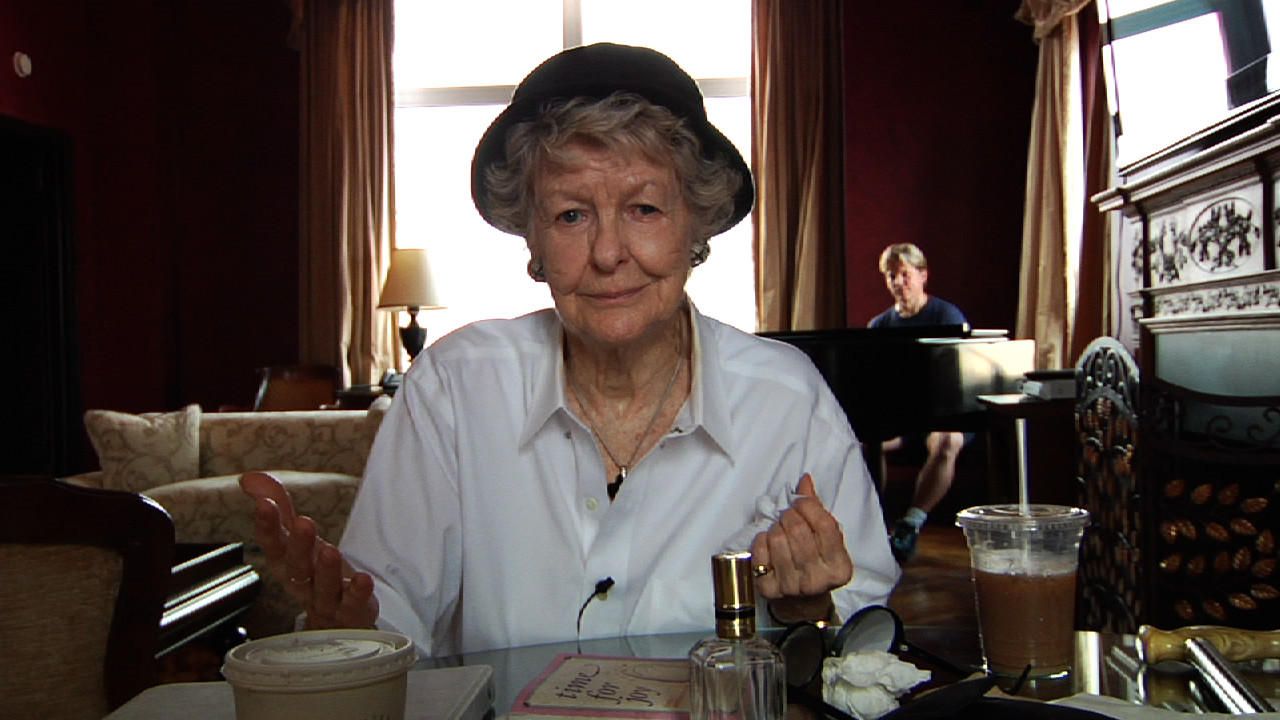 “I wish I could fucking drive! Then I’d really be a menace.” Those are among the first words we hear Elaine Stritch deliver in Elaine Stritch: Shoot Me, and while it’s become something of a cliché, especially in many modern comedies, to wring easy laughs out of the spectacle of an elderly figure swearing, this is Elaine Stritch we’re talking about here: the stage and screen legend who’s built a long and distinguished career partly out of giving off the aura of not taking bullshit from anyone. One doesn’t even have to see her perform live to get that sense; just listen to, say, her definitive recorded interpretation of the “Ladies Who Lunch” number in the 1970 cast recording of Stephen Sondheim’s Company, and one can immediately hear her no-nonsense personality in just about every note she sings.

But there’s more to Stritch than just attitude, especially now that she’s 87 and dealing with all the usual hazards of old age, such as disease and imminent death. Chiemi Karasawa’s documentary is remarkable for its candor, but it’s a brutal honesty that Stritch herself gladly offers, to the point that she’s willing to berate a cameraman for hanging back and not following her outside her living quarters at the Carlyle Hotel while going about her morning routine. Even in life—or, at least, life as captured by Karasawa’s camera—Stritch is willing to bare herself emotionally, lay everything on the line for the sake of getting at greater truths.

It’s for that reason that, as eye-opening as Shoot Me is as a portrait of this particular artist, it also ultimately adds up to something richer than simply a tribute. This isn’t a simple “raging against the dying of the light” movie the way, say, Martin Scorsese’s Shine a Light was for the Rolling Stones. Even as Stritch continues to stay active in the performing arts and maintain her steely irascibility, she openly confesses her own fears and regrets to the camera, to the point where, when we see her get frustrated at her inability to remember certain lyrics during rehearsal, or reminisce wistfully about her late husband and how she never found the same kind of love with anyone since, Karasawa’s film has the power to inspire in its audience a similar sense of reflection on one’s own past, present, and future.

Still, of course, the project was surely conceived as an affectionate tribute to this singular performer, and to that end, there are the expected testimonials of praise for her artistry from fellow actors and directors (including, most poignantly, the late James Gandolfini, who admits that, if she had been younger when he met her, he would probably have had a short but torrid love affair with her). Though some of these talking heads offer valuable insights into the way Stritch works (theater directors like George C. Wolfe and Harold Prince offering the most telling anecdotes), in the end, with Stritch giving so much of herself on screen, these moments seem almost unnecessary, a sop to documentary conventions. All one needs, really, is to hear her uproarious tale involving John F. Kennedy and an abortive romantic tryst, and her between-the-lines wistful acceptance of an opportunity possibly dashed, to fully understand the tough yet vulnerable human being behind the uncompromising artist and brassy personality. To borrow the title of that famous Sondheim song she sings on the soundtrack in the opening moments of the film, she’s still here, and, warts and all, won’t be going away anytime soon, not if she can help it.