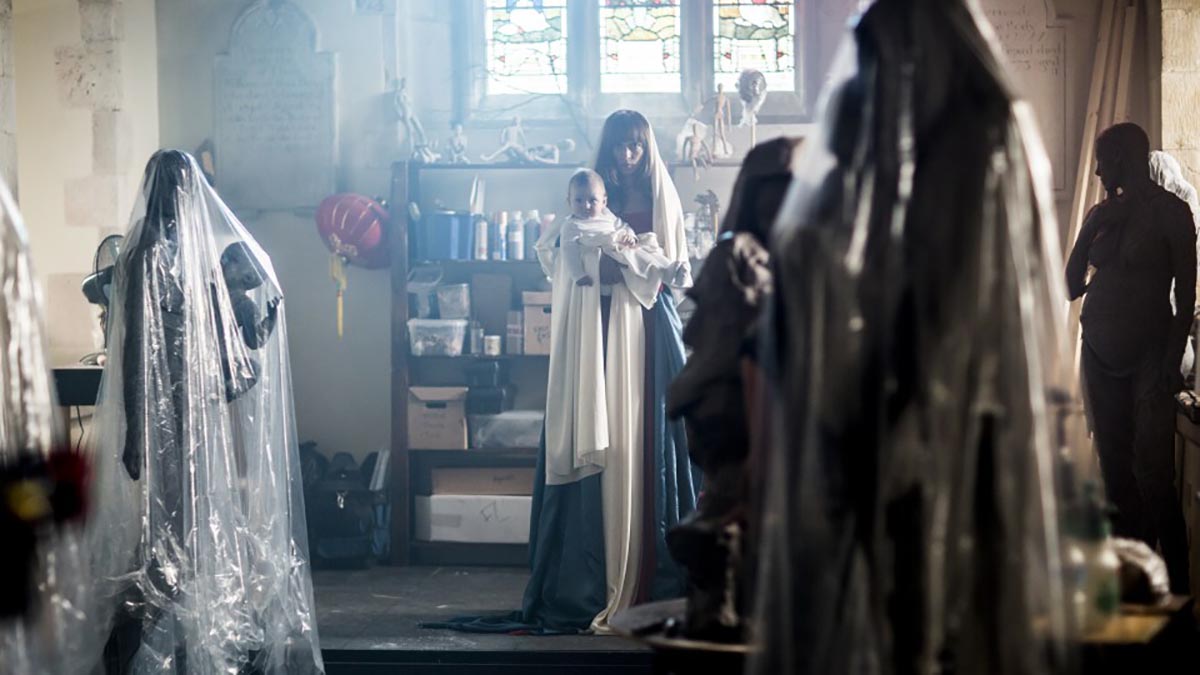 The two plots that drive Don’t Knock Twice ought to weave through each other like tendrils of smoke; instead, they knock off of one another like billiard balls. In one, a recovering addict, Jess (Katee Sackhoff), tries to win back the custody and trust of her teenage daughter, Chloe (Lucy Boynton), whom she gave up nine years ago. In the other, Chloe tries to outrun an urban legend akin to the Candyman, a dead woman whom she and a friend awaken by twice using the heavy knocker still hanging on the door of the woman’s crumbling, abandoned frame house, incongruously standing alone amid intersecting freeways—once to raise her from her bed, twice to raise her from the dead. As the title warns, you’re not supposed to do that.

These storylines—a drama of reconciliation and a tale of demon-stalking—are adequate on their own but fail to inform or intensify each other in any theme-deepening or character-developing ways. Which is to say that this Welsh ghost story adds up to less than the sum of its parts. In the end, the film’s silly moral, one supposes, is that there’s no greater proof of a mother’s love than her saving her child from a malevolent supernatural force.

To convey this, the filmmakers set a relentlessly sour mood. A near-constant electric drone buzzes on the soundtrack, and Adam Frisch’s cinematography is perpetually underlit, even in late morning. Jess lives in a massive but drearily undecorated house with her husband, Ben (Richard Mylan), and the charmless couple strain for wit. When Jess, a sculptor, invites Chloe to join her in her studio, Ben says, “Maybe she doesn’t want to be an artist. Some people have real jobs, you know.” To which Jess responds, “What, like being a banker?” “Ha, okay, you got me there,” Ben replies, almost half-smiling. “We are a bunch of shits.” It’s the sort of banter only a laugh track could love.

The film’s evil spirits terrorize their quarry using familiar genre tropes: a row of fluorescent lights that shut off one at a time, a kitchen sink that gushes blood, and a whole lot of menacing shadows in mirrors. (The filmmakers also borrow some imagery and folklore from Jennifer Kent’s The Babadook.) It’s all as tiresome as Don’t Knock Twice’s familiar ghost-story structure: escalating scares at night and escalating backstory by day, the latter often provided by one of Jess’s patrons, Tira (Pooneh Hajimohammadi), who’s in touch with her spiritual side (or something) and offers vague warnings about dark forces, spiritual ownership, and protective necklaces.

Don’t Knock Twice reaches its climax by the one-hour mark, only to continue for another half hour. This, though, isn’t an attempt to get the film to feature length. In the homestretch, the filmmakers surprisingly let loose and get a little wacky, opening up new storylines by merging the story’s mythology with a special-victims cold case. There are several over-the-top twists, including one soon reversed, each more enjoyable than anything that came before just for the displays of verve and attempts at fresh ideas. One character even gets suckered while wearing a T-shirt printed with the word “SUCKER.” I might have felt she was me, if it hadn’t been for all that sudden fun.