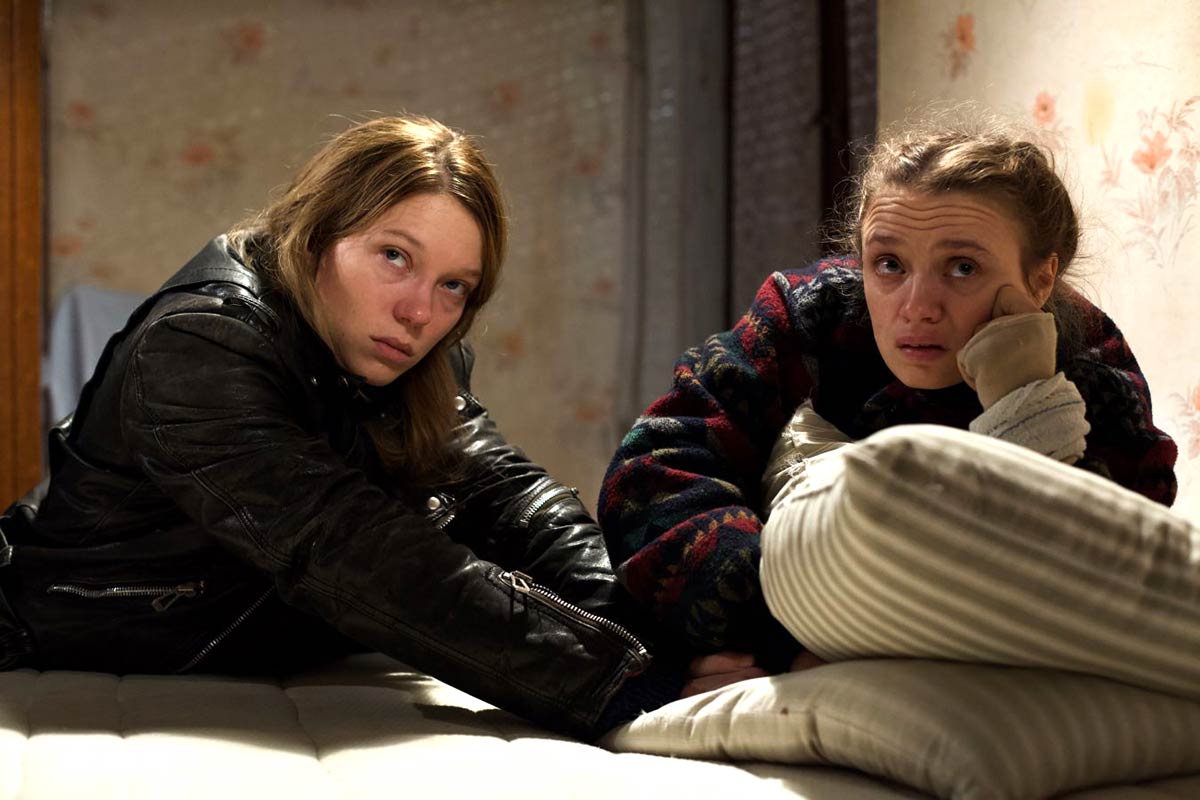 Surprisingly, many of the selections at this year’s Cannes Film Festival were genre films, or, at least, exhibited notable genre-adjacent elements. By and large, audiences recognized the influence of genre on these works in the moment, as in a UFO randomly popping into frame during Kleber Mendonça Filho and Juliano Dornelles’s Bacurau, or the eyes of a group of women rolling back in their heads during Mati Diop’s Atlantics.

Sometimes, though, a film turned out to be exactly as advertised, and that’s for the worse in the case of Oh Mercy!, Arnaud Desplechin’s follow-up to his prismatic, semi-autobiographical Ismael’s Ghosts. Set in the director’s hometown of Roubaix, this modest film about the work of maintaining order in a community stars Days of Glory actor Roschdy Zem as a level-headed police chief in charge of overseeing a number of investigations. Captain Daoud largely farms out his duties to a phalanx of hot-headed underlings, but he takes a determined interest in one case involving the murder of an old woman, possibly at the hands of her two neighbors, Claude (Léa Seydoux) and her girlfriend, Marie (Sara Forestier).

This case paves the way for the film’s most impressive sequence: two parallel interrogations depicting the methods used to meticulously weaken Claude and Marie’s resistance to being interrogated and draw out the truth. Otherwise, there isn’t much depth to this scenario to capture the viewer’s attention. At the margins of the plot, Desplechin’s attentiveness to local color is noticeable, which at least imparts a sense that he knows this community quite well and understands how social dynamics play out within it. But it isn’t too long into its running time that Oh Mercy!, in its generally abiding faith in the effectiveness and general well-meaning of police work, comes off as undiscerning in its pro-cop stance.

Still, Oh Mercy! somehow manages to seem a lot more empathetic and realistic than Les Misérables, Ladj Ly’s police drama set in the Parisian commune of Montfermeil. Ly’s feature directorial debut pretentiously co-opts the cultural cache of its Victor Hugo-penned namesake as a means of bolstering its activist political message. A brief and promising montage opens the film, and depicts jubilant Parisians of all races in a state of revelry. (This is actually documentary footage from the aftermath of France’s 2018 World Cup victory, so not exactly the June Rebellion that closes Hugo’s opus.) From this point forward, Ly largely relies on gritty faux-doc aesthetics redolent of The Wire to maneuver through a narrative that splits its time between police on the job and embedding itself with the people they’re meant to serve.

Nonetheless, the focus remains largely on Stéphane (Damien Bonnard), the newest recruit of the dubiously named Anti-Crime Squad that’s tasked with patrolling Montfermeil’s crime-ridden Les Bosquets social estate, and the way the soft-spoken man’s conscience is tested on his first day as he rides alongside two corrupt cops (Alexis Manenti and Djibril Zonga). Ly seems to give the cops too much latitude, or at least he muddles his condemnation of their behavior by lumping it in with a broader message about an untamable chaos in the suburbs of Paris. The film’s explosive finale, which sees the oppressed city kids rise up and start a war with law enforcement, could be interpreted as a call for revolution, but it could just as easily be read as a fortification of the idea that The Streets Aren’t Safe, and a film like this shouldn’t make the conflation of progressive and conservative politics that easy.

Les Misérables does, at the very least, lay bare the reality of an everyday form of violence and prejudice and makes some kind of attempt at responding to it, which is more than Jean-Pierre and Luc Dardenne bother to do with Young Ahmed. In the film, the eponymous Ahmed (Idir Ben Addi) puts distance between himself and his family, deciding that his Arabic teacher is a heretic before, finally, turning to violence. The Dardennes’ signature observational cinema, one that’s shaped by lightly applied genre conventions and subjected to chain reactions of dramatic incident, comes to feel exploitative in this context, as Young Ahmed demonstrates little interest in understanding the psychology or pathology of the troubled youth at its center, or even in grasping the sociocultural conditions that affect him.

As is their wont, the Dardennes start their film in medias res, which proves to be their first big mistake: Ahmed has already been radicalized, and so from here on out we observe his actions in a kind of vacuum. The film, then, becomes just an exercise in redundancy for the Dardennes, hitting as it does the same narrative beats of sin and redemption that all their character studies do, albeit with a different cultural face. This isn’t a well written or conceived narrative either, especially in its contrived and manipulative finale. But what makes the film outright offensive is its flippancy toward the Muslim faith. At one point, we get a match cut between Ahmed being kissed by a non-Muslim girl and the young man vigorously washing out his mouth—a moment that elicited much laughter at the film’s gala premiere.

In the past, the veracity and realism of the Dardennes’ aesthetic mode has made for convincing portraits of life on the margins, but here there’s an uncomfortable friction between the way their technique engenders a feeling of truthfulness and the calculated and methodical depiction of Ahmed’s actions. The only party that benefits here are the Dardennes, who’ve brazenly attached themselves to a subject that grants their film an unearned political weight.

One film at Cannes this year that got its genre inflections, its social commentary, and its understanding of race generally right was the steely and quixotic Atlantics, Mati Diop’s first feature-length fiction film. Atlantics derives some of the broader strokes of its narrative from a short of the same name that Diop directed a decade ago, about Senegalese youths discussing the possibility of crossing the Atlantic toward Europe. The feature version of Atlantics is set in Dakar and follows Ada (Mame Bineta Sane), a 17-year-old who’s in love with a boy named Souleimane (Ibrahim Traore) but who’s been arranged by her parents to marry a wealthy older business man. After this ostensible love triangle ends in tragedy, Diop’s film briefly morphs into something of a procedural, as a young detective (Amadou Mbow) is called on to investigate a mysterious act of arson committed on Ada’s wedding day.

It’s the way that Atlantics pivots into the realm of the supernatural, and even flirts with the horror genre, that makes it so unique. The blend of folklore spiritualism and commitment to social realism, paired with an ethereal visual sense that emphasizes the spectral experience of the subaltern, can be imprecise in terms of its political implications, but Atlantics nonetheless evokes the palpable feelings of its characters’ displacement through its shift into ghost-movie terrain. Even Diop’s balance between a more visually poetic register and a devotion to maintaining her narrative’s momentum seems less like a compromise than a reflection of this filmmaker’s confidence in her own ability to tell complicated and unusual stories in the guise of familiar narrative form. In fact, that’s a good way to frame a lot of Cannes’ competition films this year: Many are genre-adjacent, but it’s those from filmmakers that display a sense of confidence in their approach that have tended to leave the best impression.

Review: Parasite Satirically Feeds on the Ills That Divide a Society