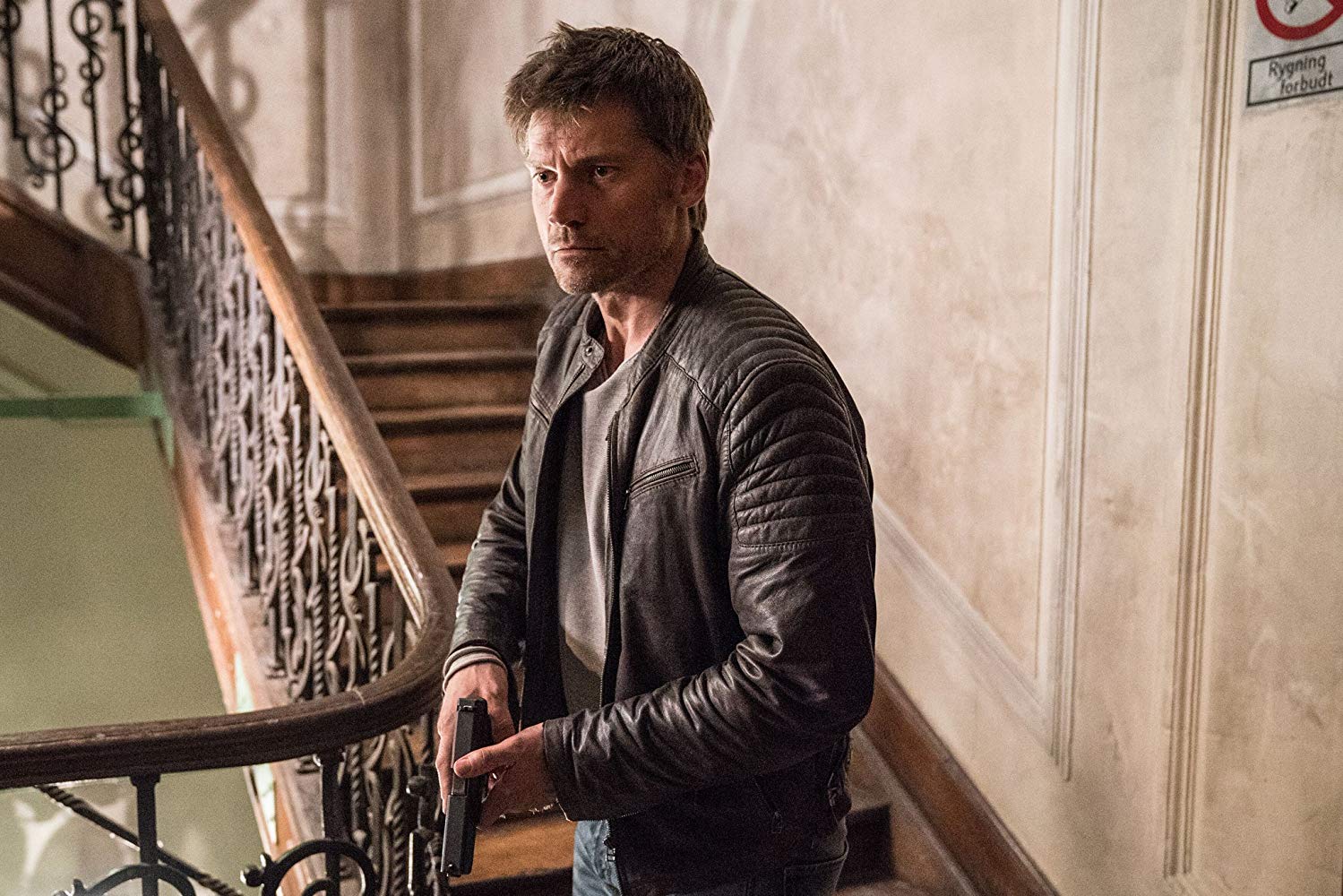 Early in Brian De Palma’s Domino, Christian (Nikolaj Coster-Waldau) wakes at daybreak and tries to roll out of the arms of his lover. The camera peers down at the detective and ever so slowly zooms in on his bed. Soon it becomes apparent that the camera isn’t even interested in the happy couple, but the gun set off to the side. Here as much as ever, De Palma has fun flexing his formal acumen, building a foundation of suspense with the camera and its subject, portending how Christian, once he manages to get his clothes on, will forget to pack heat, setting into motion a, yes, domino-like chain of mishaps.

De Palma would appear to be on familiar terrain with Domino, what with its deliriously extended set pieces, morally ambivalent characters, and smattering of references to his beloved Hitchcock (specifically to Vertigo and To Catch a Thief), with some self-reflexive commentary on the moving image thrown in for good measure. But De Palma has voiced his disfavor with the making of the film, whose production at one point was in danger of being closed down because of funding problems. So, while Domino superficially feels of a piece with what we’ve come to expect from the master filmmaker, it leaves one with the sense, as we’re wheeled from one set piece to the next, that so much texture that could have been extended to the characters’ interrelationships was probably never allowed to come to fruition.

Domino’s at-times confounding narrative hinges on the pursuit of Imran (Eriq Enouaney), an Egyptian vigilante seeking revenge on the ISIS members who killed his father. Christian and his partner, Lars (Søren Malling), apprehend him, but owing in no small part to Christian’s forgotten weapon, Imran escapes, mortally wounding Lars in the process. Christian gives chase, now with revenge on his mind, and soon we learn that the C.I.A., represented by the snarly and cynical Agent Martin (Guy Pearce), is using Imran’s personal vendetta against ISIS: If the Americans can’t detain and kill terror suspects on foreign soil, Agent Martin will happily exploit the personal grievances of a lone vigilante to do it for them. Christian, meanwhile, is tasked by his Copenhagen superiors to find Imran, and is joined by Alex (Carice van Houten), another detective who happens to have been Lars’s clandestine lover.

A story with the complex interplay between the intimately personal and the globally political comes across as a playful provocation worthy of the director of Hi, Mom! and Blow Out, but Domino is an auteurist-as-journeyman high-wire act that feels weirdly free-associative, as if its ligaments were all in the wrong place. In a formally impressive split-screen sequence, we glimpse a suicide bomber’s head-cam point of view on the right, and on the left news footage of a film festival’s red-carpet event where the bomber is lurking about. Presented as a live video being watched in real time on a laptop by the terrorist plotters, the sequence climaxes as a spectacle of glamor and gore, pointing to our own culpability as voyeurs in a culture of violence. Yet the story and characters surrounding this brutal moment are so devoid of richness and energy that the set piece, which suggests a directorial gesture occurring in a vacuum, doesn’t pull off the perversely incendiary effect that De Palma no doubt intended.

In the abstract, Coster-Waldau’s Christian has the ingredients of other De Palma heroes, as he’s attractive, charismatic, and, of course, way in over his head, but that’s about all that can be accurately said about him based on what’s on screen. The film’s strongest performer is Ebouaney, as we get flashes of his powerful screen presence here and there, as when the C.I.A. makes Imran watch as agents threaten to show his adolescent son the violence of which his father is capable. But the reverberations of Imran’s agony and determination feel muted in the end, making it seem as if he only exists to move the plot forward.

Like the film’s split-screen sequence, the scene where Imran watches his son on a surveillance camera underlies how De Palma no doubt wanted to make a film that considers the similarities between manufactured genre narratives and the true-life videos that proliferate on YouTube, and how our steady consumption of both is working to increasingly blur the line between fiction and nonfiction. But Domino goes through its motions too quickly for its imagery to convey the irrepressible force of provocation. And as a result, it’s more than a little easy to peg Martin as a double for De Palma, a cynic using a foreign country and actors to accomplish his ends, only to see the zealous motives of such accomplices—in De Palma’s case the film’s Danish producers—fuck him over, forcing him to go home while rolling his eyes.