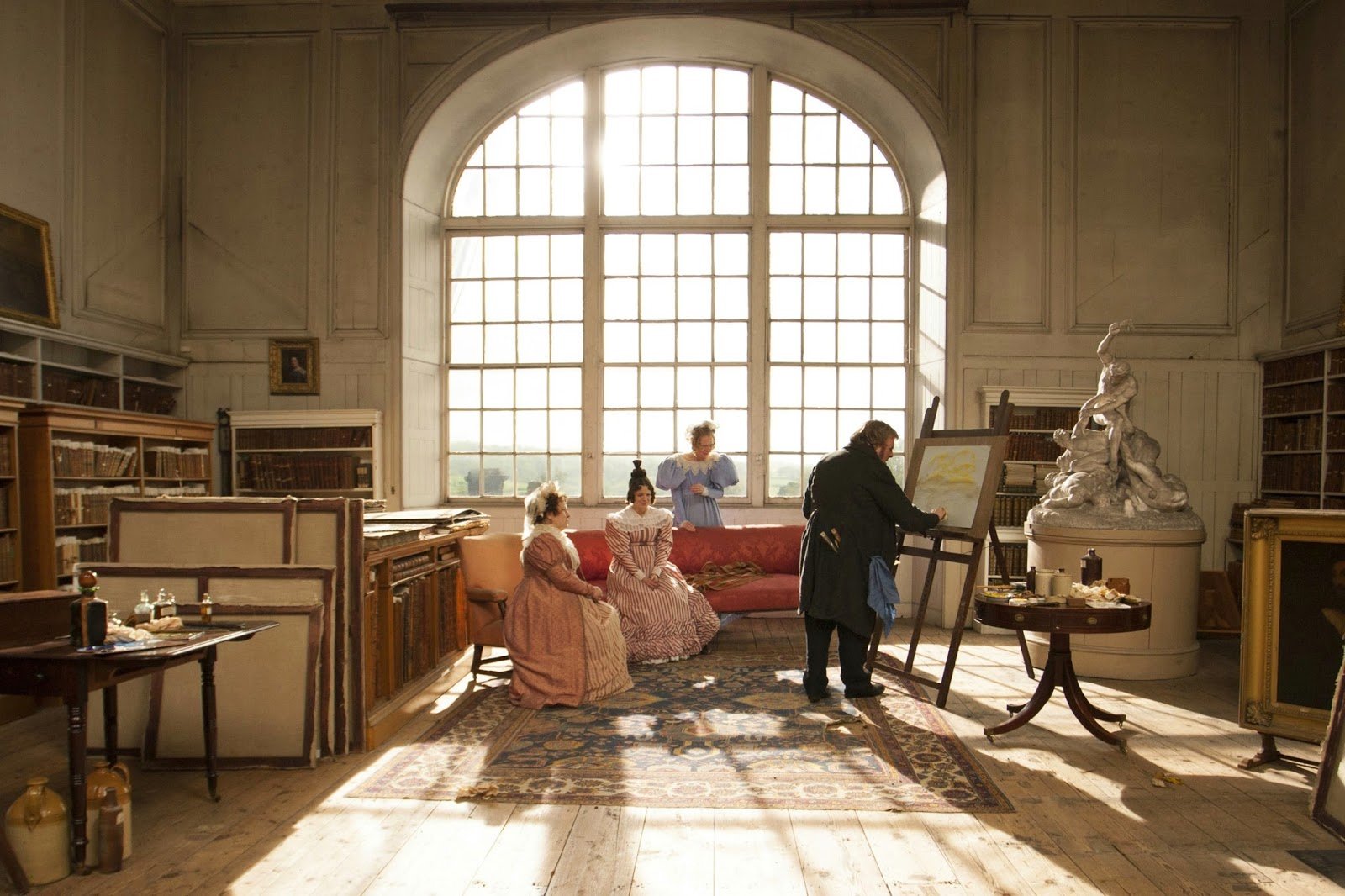 Mike Leigh’s sprawling J.M.W. Turner biopic opens with a marvelous extended-take long shot: A windmill’s silhouette churns its blades against the rays of the rising sun as two Flemish maids enter the frame carrying buckets of water on their shoulders, the camera tracking with them along the muddy banks of a canal before settling finally on a distant figure in top hat, Mr. Turner (Timothy Spall), fervidly sketching the scene in a portfolio. In one masterfully conceived shot, Leigh evocatively situates us within the milieu of a Turner canvas, while almost subliminally shading in one of the film’s foremost themes: the once celebrated painter’s progressive sidelining by the tumultuous forces of 19th-century history as well as the fickle tide of public opinion.

Mr. Turner suggests itself as a more morose companion piece to Topsy-Turvy, Leigh’s raucous and outsized treatment of Gilbert and Sullivan’s music-hall demimonde. Which isn’t to say that the film is an entirely humorless undertaking. Quite to the contrary, Leigh indulges his penchant for splenetic, even churlish comedy. When Turner isn’t flummoxing his listeners with floridly baroque circumlocutions, his characteristic grunt speaks even more eloquently as a wicked deflation of social hypocrisy and cant. Mr. Turner hits the traditional biopic beats more routinely than the latter, but at least it refuses to truck with that most irksome generic sawhorse, the emotionally tidy rise-and-fall arc, by a simple expedient: opening at the height of its subject’s popularity, and then dwelling with Leigh’s characteristically misanthropic relish on the artist’s latter-day sufferings and setbacks.

Turner’s combative familial relations with the mother of his children (whom he never openly acknowledged) may be played for acerbic laughs, but his almost bestial sexual relations with long-suffering housemaid Hannah (Dorothy Atkinson), whose slavish devotion is doomed to remain forever unrequited, furnish the film with its affective core. Whatever slings and arrows Turner may suffer throughout the film, Hannah’s always there to pick up the pieces of his colossal indifference to propriety (and, on occasion, simple human decency), and so the film fittingly returns to her for its anguished coda.

Turner’s elderly father fleshes out the other end of the emotional spectrum, showcasing Turner’s filial devotion. When Turner comes back from the Continent at the start of the film, the two men embrace enthusiastically, coming together like two aging but amiable tortoises. After Queen Victoria rejects one of his son’s paintings, he opines, “It was too good for her!” And there’s a strangely endearing moment of shared laughter when the old man chastises his “Billy” for speaking ill of his dead (and possibly mentally deranged) mother, then proceeds to dismiss her memory with an acidic aside: “Bitch.”

Not content with mere portraiture, Leigh crowds his canvas with a dense array of period-specific subject matter from experiments in natural philosophy (the magnetic effects of light and color) to infighting among the ranks of the National Academy. Immersion in the social milieu is impressive: The street scenes look like they were taken straight out of Hogarth, and there’s a hilarious sequence set amid the painting-packed walls of the Academy’s contentious summer exhibition that visually recreates a famous engraving by caricaturist Thomas Rowlandson.

Leigh also explores Turner’s determination to keep up with the onslaught of technological advances, especially those twin talismans of the era: the railroad and the daguerreotype. Just as steam power put paid to the sailing vessels of Nelson’s army that had been celebrated in many a Turner canvas, the camera’s seemingly objective ensnarement of natural phenomena puts entire schools of naturalistic painting in jeopardy. Turner’s efforts to keep abreast with the times result in a work the queen denigrates as “dirty yellow mess,” after which Turner becomes something of a laughingstock, subject to ridicule on the street and even in the theater. But Leigh isn’t so much interested in artist as martyr as he is in the artist as self-contained multitude, containing all the foibles and paradoxes of his age. Mr. Turner, as it titles suggests, is a portrait of the artist as everyman.