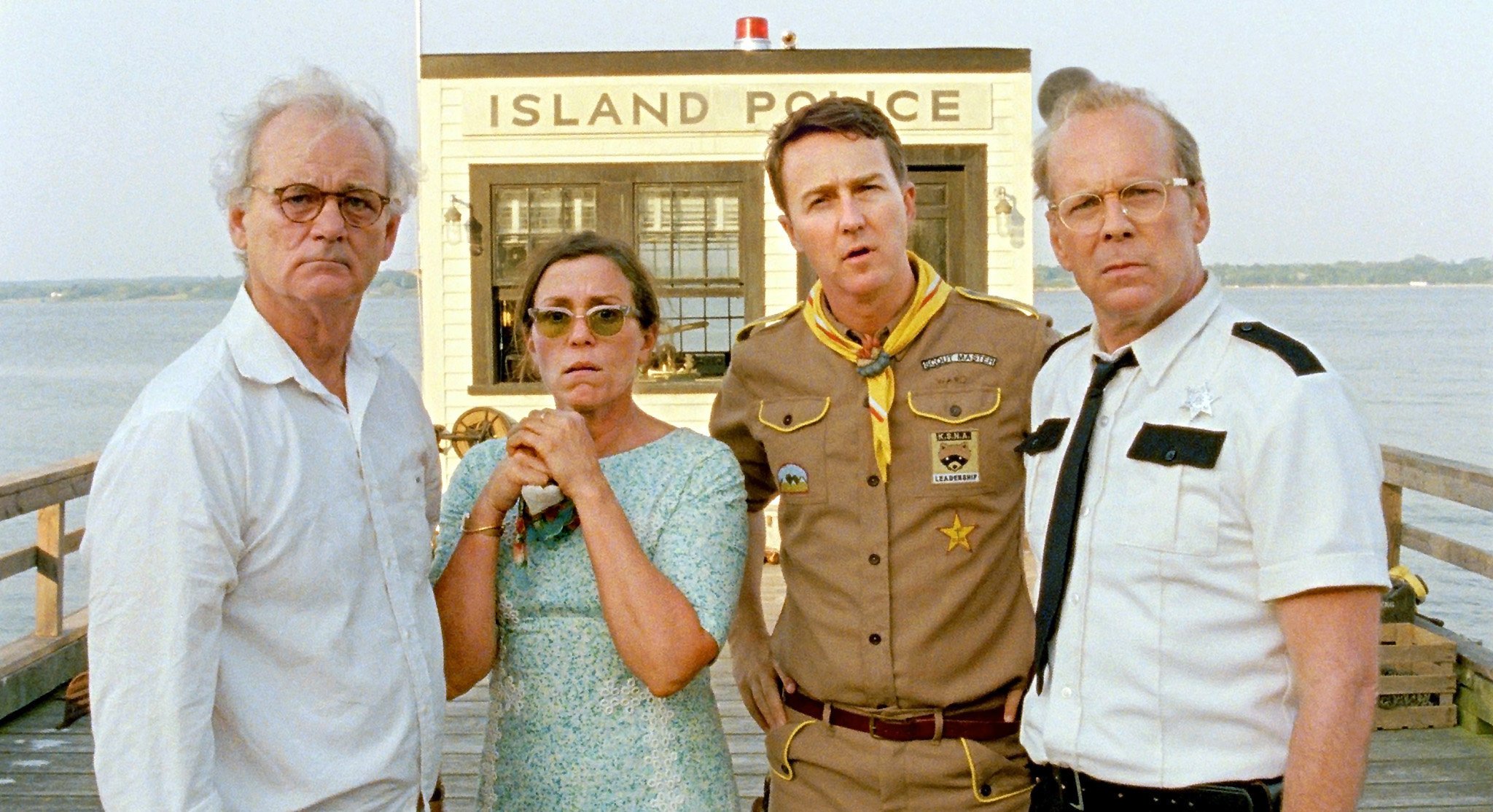 The opening scenes of Moonrise Kingdom are vintage Wes Anderson. A series of pans and lateral tracks explores the Bishop household in studied tableaux, each isolated member of the family captured in their native habitat, while on a 45rpm record a disembodied voice guides listeners through the works of Benjamin Britten. Likewise, there’s a narrator (Bob Balaban) to guide us through Anderson’s film, in just one of many recursively referential—and, at times, painfully self-aware—touches. Examples could be further multiplied, but let’s stick with the Britten: Not only does his music recur in the epilogue that effectively bookends the film, but Britten’s opera Noye’s Fludde, itself based on a medieval mystery play (see the Chinese puzzle box pattern emerge?), serves as an objective correlative for the acts of God or nature that dominate the second half. As the recorded voice intones late in the film, “Britten has taken the orchestra apart and now puts it back together again.” Much the same could be said for Anderson’s direction and script work with co-writer Roman Coppola.

Moonrise Kingdom is therefore an unabashed continuation and, what’s more, intensification of the rigorous aesthetic preoccupations and occasionally precious thematic concerns that have long marked Anderson’s films. Since, time and again, adolescent precocity has been his narrative meat and potatoes, he can be given a certain amount of latitude for such indulgences as his obsession with handwritten notes and other kinds of communiqués. Another mainstay, exacting period detail (let alone the sheer density of compositional elements), is certainly never less than faultless. The film’s visual and sonic textures are often mesmerizing: Hitting a Kubrickian note with the precision of his shot compositions and motivated camerawork, Robert Yeoman’s cinematography isn’t afraid to come off the dolly and go handheld for woodland chase scenes. Framing and expressionist light-and-shadow play bring poignancy to a bedtime (separate beds, naturally) tête-à-tête between Walt Bishop (Anderson axiom Bill Murray) and his megaphone-happy wife Laura (Frances McDormand).

Set in 1965 on New Penzance Island and its environs, with (as quasi-bibilical backdrop) a natural catastrophe on the horizon that our helpful narrator clues us into only minutes into the film, Moonrise Kingdom is, at bottom, a preteen love story centered on fugitive Khaki Scout Sam Shakusky (Jared Gilman) and fantasy-novel enthusiast Suzy Bishop (Kara Hayward). The two meet cute in flashback when Sam goes commando behind the scenes at a local production of Britten’s aforementioned opera. Like one of Suzy’s beloved novels, often read aloud to increase the film’s textural density, the story is bicameral: Its first half chronicles the lovers on the run and the motley crew of adults sworn to track them down, among them local police captain Sharp (Bruce Willis in Breakfast of Champions flyaway-hair mode). Anderson commendably pulls few punches handling the sensual and sexual nature of adolescent onset, craftily using the insertion of a fishhook earring into a hitherto untouched earlobe to suggest so much more. These scenes possess a freewheeling earnest not dissimilar to the ‘60s period-contemporary filmmakers of the French New Wave. (Consider this a tween Pierrot le Fou.)

Captured and returned to alleged status quo at the end of the first half, the second details various rescue operations, emotional as well as literal, on the part of the chastened, hence wiser, adults. Faces new to Anderson films (Willis, Tilda Swinton, Harvey Keitel, Edward Norton) as well as familiar ones (Jason Schwartzman has an amusing cameo as scout camp chaplain) are always a pleasure to behold, even while mood and morale darken, and the promised flood descends on the region. Registering the key change, Anderson employs Hank Williams songs like “Kaw-Liga” and “Cold, Cold Heart” throughout the film’s midsection, evocative lovelorn laments as well as thematic cues. When the waters finally do sweep away the Fort Lebanon Scout camp, the inundation immediately brings to mind the conclusion of the Coen brothers’ O Brother, Where Art Thou?, another programmatic, problematic, yet affectionate, homage to times past and passed.