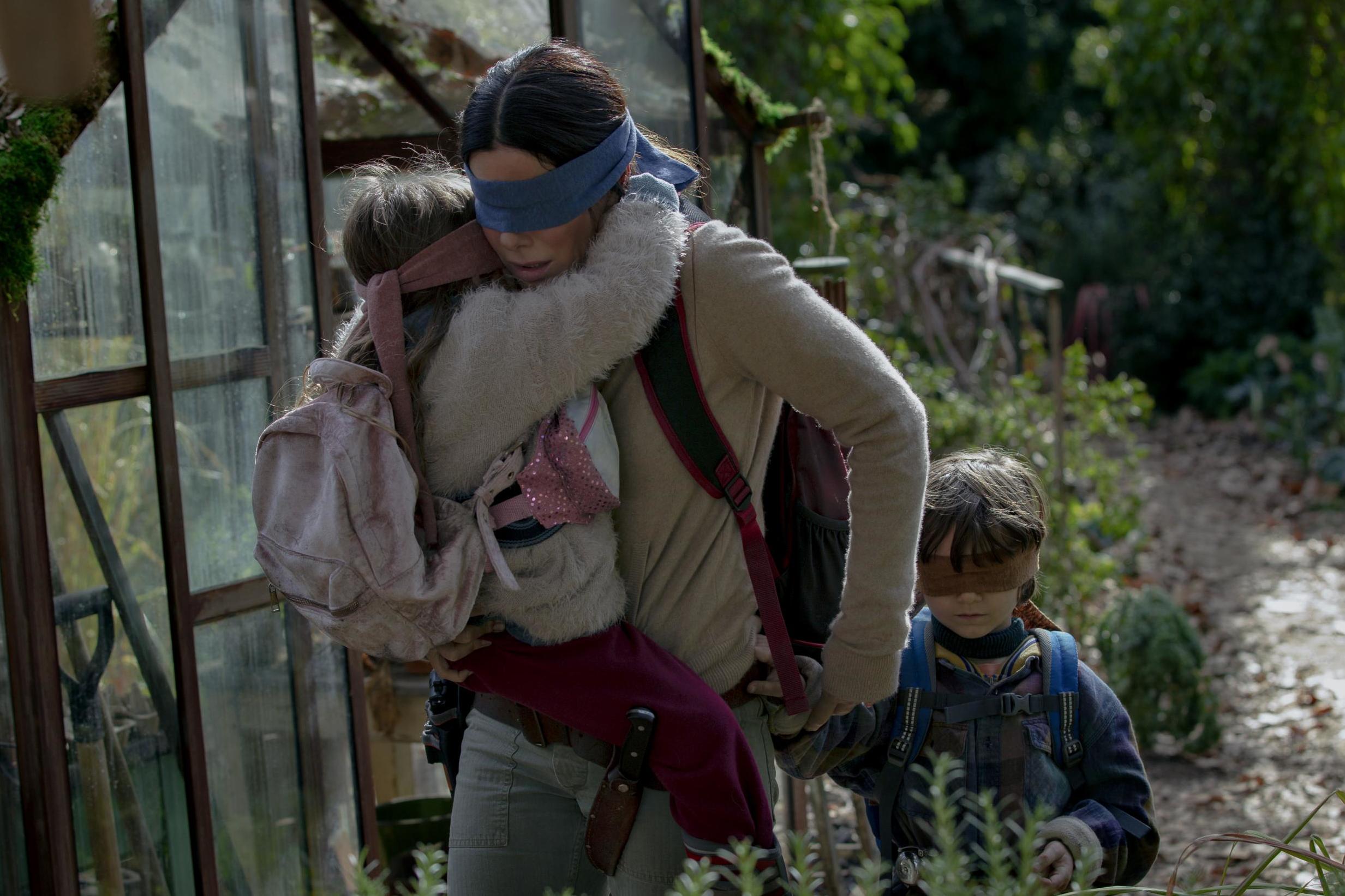 Needing to avoid psychotic zombies isn’t the only danger faced by the harried survivors of an unspecified pandemic at the start of director Susanne Bier’s adaptation of Josh Malerman’s novel Bird Box. The hard-as-nails Malorie (Sandra Bullock) and her two five-year-old wards must also manage navigating a postapocalyptic wilderness while wearing blindfolds. Oh, and they’re in a boat on a fast-running mountain river with rapids approaching. Also, they’re threatened by invisible monsters who can only be spotted when nearby birds start chirping and who cause instant suicidal tendencies in those who look their way. Things aren’t looking good for the trio.

Eric Heisserer’s screenplay bifurcates this narrative, cutting back to a calmer past to show the catastrophe’s start and immediate aftermath and effectively preventing the film from being a straight-shot survival story. Heisserer also builds in a last-act reveal that—like in his script for Denis Villeneuve’s Arrival—means to surprise more in terms of character than plot. When we first see Malorie, she’s scaring the bejesus out of the kids in her care, named only Girl (Vivien Lyra Blair) and Boy (Julian Edwards). “I will hurt you,” Malorie threatens them about taking their blindfolds off. “If you look, you will die.”

Having established that the stakes are high and Malorie is a stone meanie, Bird Box flips back to just before things went to hell. In a few short, sharp strokes, we go from pregnant Malorie visiting her OB-GYN and sparring kiddingly with her sister, Jessica (Sarah Paulson), to seeing a woman smash her head through a window for no apparent reason. Soon the streets are filled with people violently butchering themselves. The culprit is impossible to see—just a whispering in the wind and a scattering of leaves. The resulting scenario is like an imagination-starved redo of M. Night Shyamalan’s The Happening crossbred with a more malevolent strain of zombie-flick DNA.

When Bird Box shifts to locked-house mode, though, it becomes more interesting. Holed up inside a luxurious house with all the shades drawn, the film’s compilation of stock characters start going after each other. It’s a familiar scenario, but the assembled cast plays to type with a fervor that Bier channels with increasingly taut precision. They range from the amusingly dyspeptic (John Malkovich, gnawing at his lines like a terrier might with a slice of beef jerky) to the suspicious outsider with a secret (a fey and sinister Tom Hollander), disposable pretty people (Rosa Salazar and Machine Gun Kelly), chubby fanboy comic relief (Lil Rel Howery), and sturdy squared-jawed war-vet hero (Trevante Rhodes, doing a lot with very little).

Initially, the half of the story showing Malorie’s blindfolded river-rafting journey—a Hail Mary after picking up a scratchy voice on the radio promising safe refuge for her and the two children—looks like nothing more than a transparent reminder that the house sanctuary in the flashback narrative won’t last. But eventually it points to a more noxious thread in the story: namely, that Malorie’s solitary-minded refusal to fully own her maternal instincts could be the difference between life and death.

Many sections of Bird Box don’t hold up to a second’s scrutiny; the conceit’s silliness and convenient scare tactics make Shyamalan’s take on infectious-suicide horror seem downright subtle by comparison. But the highly versatile Bier, who has shown that she can volley with ease from glossy Italian romance (Love Is All You Need) to gritty issue drama (In a Better World) to slick globe-trotting espionage (The Night Manager), turns the film’s narrative screws with fierce and unnerving skill. She also gets the best out of a high-throttle cast, especially Rhodes and Bullock, who come close to selling the desperation of people trying to decide whether, after the end of the world, merely surviving can be enough. Bird Box doesn’t answer that question. But, for a little while at least, it makes the audience care about the answer.