It can be satisfying to see stereotypically melodramatic tropes fulfilled on screen, but when a film becomes the trope so entirely that one can guess the ending and the various subplots within the first few minutes, the effect is dispiriting. Such is the case with Susanne Bier’s Love Is All You Need, a comedy of wish-fulfillment that follows a perky and upbeat hairdresser, Ida (Trine Dyrholm), who’s just completed chemotherapy treatment for breast cancer. After finding out that her husband, Leif (Kim Bodnia), has been cheating on her while she was ill, Ida heads to her daughter’s wedding in Italy, meeting cute with the groom’s father, Philip (Pierce Brosnan), en route. It so happens that Philip, a wealthy businessman with an embittered solo existence, lost his wife several years ago and has been unable to connect with anyone since. It doesn’t take a clairvoyant to see what’s coming.

What makes Love Is All You Need a head-scratcher isn’t just its plodding predictability, but how at ease it seems to be with its own conventionality. Bier and co-writer Anders Thomas Jensen give their characters short character arcs, if any at all, and they fail to infuse the story with any real and resonant twists; moments of change or catharsis are nil. Ida remains the same throughout: Candide-ian, with a goofy smile and a good attitude. So does Philip, who, despite warming to Ida, remains prickly to everyone else. Brosnan is in characteristically fine form, but as Philip’s behavior is relatively mild to begin with, the character has a fairly easy glide to the finish line. And the rest of the characters are merely trimmings, put in place to grease the tracks to the unification of the two principals (and to get the heck out of the way when the unification is nearing completion).

At times, it seems as if Bier set out to create some kind of absurdist comedy, but lost her nerve somewhere along the way. The visual aesthetic often hints at quirkiness or at least the tropes of Wes Anderson, what with the over-saturated color palette (such as the crisply shot citrus orchards and collages of Amalfi’s architecture) and humorous two-shots of Dyrholm and Brosnan. While Dyrholm certainly plays up Ida’s eccentricities whenever possible, and sometimes to winning effect, this strategy is half-baked, as the predictability that’s inherent to the narrative through line effectively obliterates any attempts for the film to veer into a more absurdist realm.

But if the tone seems muddled, the underpinnings of the film are classically Bier-ian. Divorce, adultery, cancer, and fleeting allusions to war/developing nations (Ida’s son is in the military) have all been addressed in the director’s recent films, and here it feels as if she’s tried to slide all of her pet issues into a standard-issue rom-com format in order to make her work palatable outside the art house (and the Academy), and to appeal to the wider cadre of moviegoers attracted by the prospect of a romantic union involving Pierce Brosnan. Unfortunately, what she ends up with is a mixed bag of aesthetics and stereotypical plotlines, instead of anything approaching humor or romance.

Blu-ray Review: Thomas Vinterberg’s The Celebration on the Criterion Collection 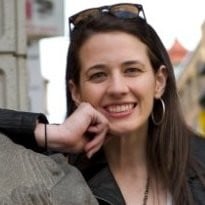 Caroline McKenzie is currently a creative director with the series marketing team at Amazon Studios. Her writing has also appeared in Reverse Shot.