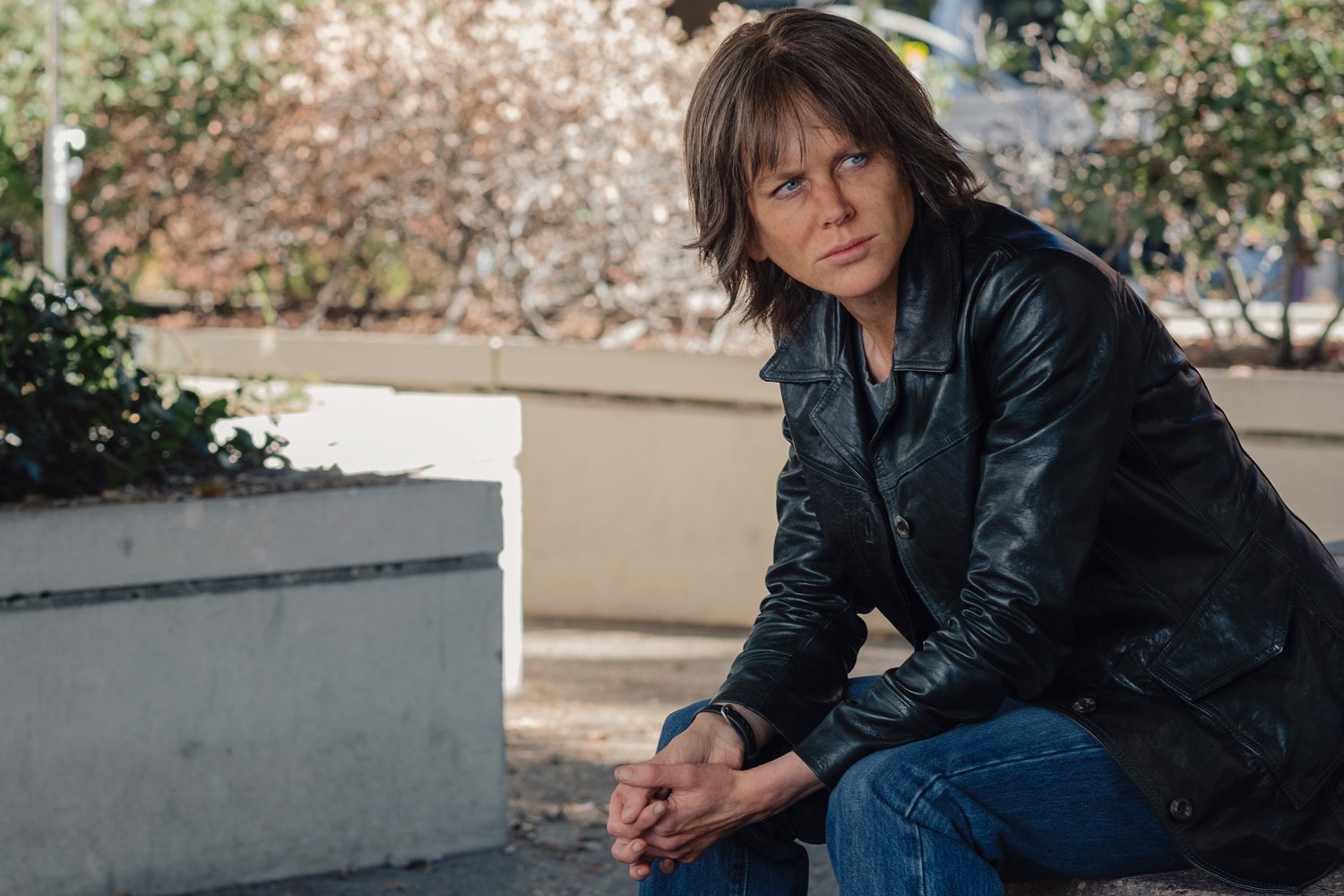 When Nicole Kidman won the Oscar for her ostentatious turn as Virginia Woolf in The Hours, she only had to don a prosthetic nose. The very next year, Charlize Theron went Kidman one better, playing serial killer Aileen Wuornos under several layers of deglamorizing makeup, winning her own golden statuette, and inspiring Slant reviewer Jeremiah Kipp to quip in his very negative review of Monster that she resembled a “sun-baked wooly mammoth.” It took a while, but Kidman now appears to be returning Theron’s volley in the torturously self-serious crime thriller Destroyer.

As L.A.P.D. detective Erin Bell, Kidman starts out “sun-baked,” though it might be more pertinent to say that she’s luxuriating in the flames of a personal hell. The first shot is an extreme closeup of Erin’s glassy blue eyes, barely adjusting to the blazing California sun. Her skin is freckled and pasty, her dark brown hair dried out. She’s in a car under a freeway, the traffic roaring by overhead—a perfect complement to Erin’s splitting headache. She walks to a nearby reservoir, her every fatigued step that of someone for whom benders are a way of being. Two fellow officers, who treat Erin disdainfully, are standing over an unidentified body riddled with bullets. A dye-stained $100 bill is one of the only clues. Erin toys with the cops through her hungover haze, saying she may know who did the deed but refusing to reveal more.

Answers will be doled out over Destroyer’s next two hours, and in ways that flatter Kidman’s shamelessly coarse and bedraggled star turn. Erin isn’t a character so much as a vehicle for debasement. She’s a bad cop, in all senses of the term, as well as a terrible parent to her teenage daughter, Shelby (Jade Pettyjohn), whose own rebelliousness stems from Erin’s various traumas and her inebriate’s way of dealing with them. The ruined Erin of the present shares screen time, via a parallel story set many years before, with a pluckier, fresher-faced Erin, who, at the start of her law enforcement career, infiltrated a gang of bank robbers with her partner, mentor, and eventual lover, Chris (Sebastian Stan). So, we get two Kidmans for the price of one: the alabaster beauty ready to take on the world and the sallow wreck with a near-completely shattered moral compass.

Neither is especially compelling or credible. Kidman either turns up the faux-innocence, distractingly attempting to seem much younger than her years, or she leans full-bore into the degradation, as in a scene in which the older Erin elicits information from a sickly crook (James Jordan) by jerking him off. “Spit on it. Spit on it,” he moans as she tugs away. The way she nonchalantly leans over to hock up a parched loogie is so sordid it may drive you to celibacy.

The rest of the cast is at sea in this grim morass, never mind in the face of Kidman’s dramaturgical contortions. So they either vanish into the woodwork or amuse themselves. How else to explain the smugly macho posturing of Bradley Whitford and Toby Kebbell, both playing criminals, though of slightly differing privileged-male stripes, who misogynistically dress Erin down?

The primary goal seems to be to remake one of Michael Mann’s voguish thrillers from a feminist perspective: Heat but with a strong-willed, if still wrongheaded, woman, plus two bank robberies gone wrong. And the contradiction inherent to a noirish tale of this sort is that all the bad behavior should be somewhat pleasurable to watch.

Yet director Karyn Kusama and screenwriters Phil Hay and Matt Manfredi treat the material sternly and humorlessly, as if there’s some great moral lesson to be imparted from Erin’s inexhaustible blotto jerkiness. The pretension extends to the tiniest detail: Look, for example, at how Kusama photographs, in chiaroscuro and slow-mo, a group of skateboarders who bookend the film as if they have some revelatory metaphorical import. Yet the longer Destroyer goes on, the more it becomes apparent that there’s barely enough substance here to support an Aesop’s fable, let alone a Los Angeles crime epic.