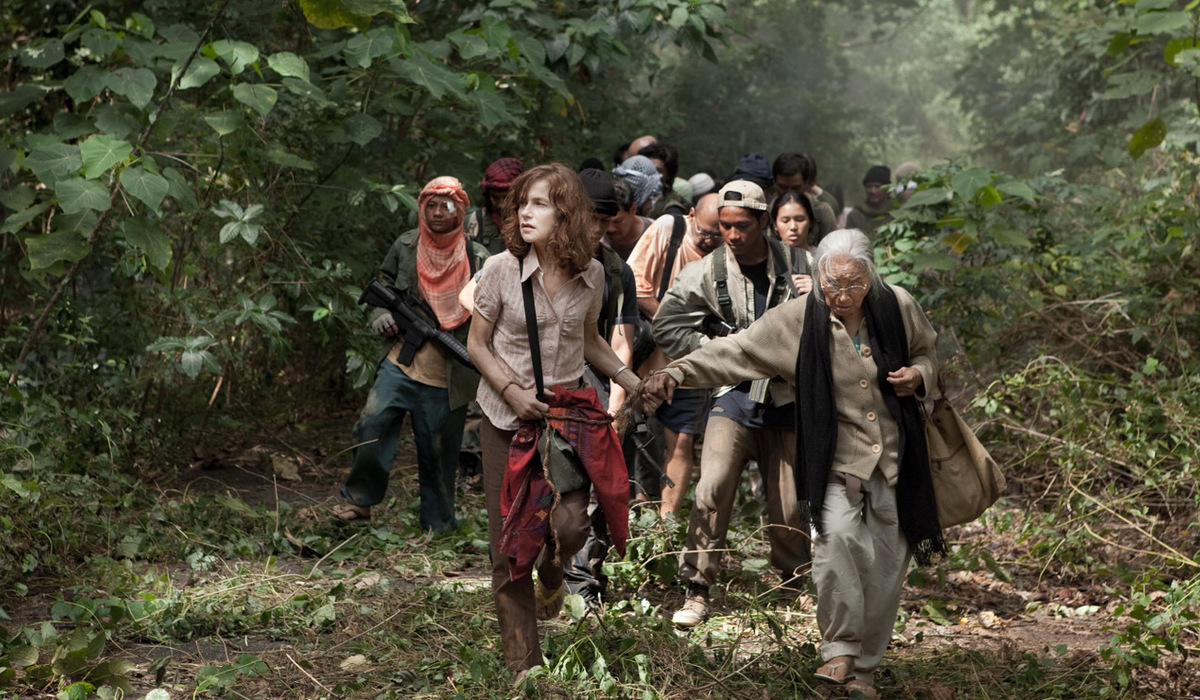 Berlinale, the most smoothly run of all major festivals, is a pleasure for the Anglophone. Everybody speaks English and most of the non-English-language films have English subtitles rather than German. However, this Anglo-centricism seems to be creeping into several films here, among those from the Philippines, China and Switzerland, which suffer from the misguided idea that they would attract a wider audience, especially an American one.

English is the lingua franca of Brillante Mendoza’s Captive, which seems to have been directed by his younger brother, Mediocre Mendoza. Based on a true story of the kidnapping of a group of tourists and Christian missionaries by a group of armed men belonging to a militant Islamist group, it fails the first principal of a disaster movie: identification with the victims. Except for Isabelle Huppert, as one of the missionaries, they’re an anonymous lot. Only toward the end of a long two hours, during which we are subjected to what can be called “wobblyscope”—jerky handheld camerawork intending to give the story the immediacy of a documentary, relieved only a few times by a crane shot or two—is there a feeble attempt to get Huppert to relate to one of her captors, a 15-year-old soldier. Mendoza seems to think that it’s enough to present the hardships the victims suffered in the Philippine jungle at the hands of Islamist fanatics without any overarching viewpoint.

Far worse was Zhang Yimou’s latest disaster—after his crass remake of the Coen brothers’ Blood Simple, called A Woman, a Gun and a Noodle Shop, shown in Berlin two years ago. One of the most expensive of Chinese films, Flowers of War, set during the Japanese invasion of Nanking in 1937, is a waste of money and 140 minutes of one’s time. There are a lot of spectacular explosions and guns firing, sexy prostitutes seeking refuge in a Roman Catholic church and pretty adolescent girls at the missionary school where Christian Bale, as a drunken American renegade, has taken on the guise of a priest to protect the women and children. This allows much of the stilted dialogue and some speechifying to be in English.

Ursula Maier’s Sister benefits greatly from the single setting of a luxury ski resort in Switzerland, and the performance by 14-year-old Kacey Mottet Klein, already seen in Maier’s superior first feature, Home. He plays a boy who steals what he can at the resort—mostly expensive skiing equipment—to support his jobless, sluttish sister. The original title, L’Enfant d’en Haut (“the child from on high”), is more descriptive than Sister. Although quite intriguing for much of the way, it begins to become less so after an unconvincing character revelation, and the boy’s stealing becomes repetitious. There’s also the introduction of a British kitchen worker (Martin Compston of Ken Loach’s Sweet Sixteen), mainly to get in some English dialogue—albeit in a broad Scottish accent. No matter how unfair comparisons are, I couldn’t help but be reminded of what the Dardenne brothers would have made of the same plot and characters. The main message of the film is “if you go skiing don’t leave your gear lying around.”

“I’d like to be able to speak English,” says the Southern-accented Billy Bob Thornton, playing a rather simple ex-pilot, to a young English woman whose accent excites him sexually. Thornton’s fourth feature, Jayne Mansfield’s Car, is a reasonably enjoyable, competently made family drama set in a small town in Alabama in 1969, while the Vietnam War is raging. The war is a divisive element, creating tension between the generations, especially between the head of the family (the splendid Robert Duvall, who more and more resembles an iguana) and his peacenik, pot-smoking son (a bearded, long-haired Kevin Bacon). The main thrust of the plot is the bringing together of the Alabama family and an English one for a funeral, a device that provides an initially amusing culture clash that hovers on caricature. It also hovers most of the time on the right side of sentimentality, though it moves on the wrong side as the narrative threads are gathered toward the end. Nevertheless, there are some delightful sequences (excluding the one where Billy Bob masturbates while the aforementioned English girl recites “The Charge of the Light Brigade” in the nude), especially when the two wonderful old heads, John Hurt and Duvall, get together. The titular car, by the way, the one in which the star was killed, is up for sale to the macabre pleasure of Duvall, who likes to visit the scenes of auto accidents.

An exception, in a competition that’s yet to catch fire, is Meteora, by the South American-based Greek director Spiros Stathoulopoulos. Magically photographed around an Orthodox monastery perched up in the mountains of central Greece, it manages brilliantly to combine documentary, fiction, and animation in its depiction of an Abelard and Heloise-like love affair between a monk and a nun (played by the incredibly attractive Theo Alexander and Tamila Koulieva). The film’s exploration of the sacred and the profane on a number of levels made it something special, and it made me hope for another revelation in the second half of the competition.

Review: The Secret World of Arrietty