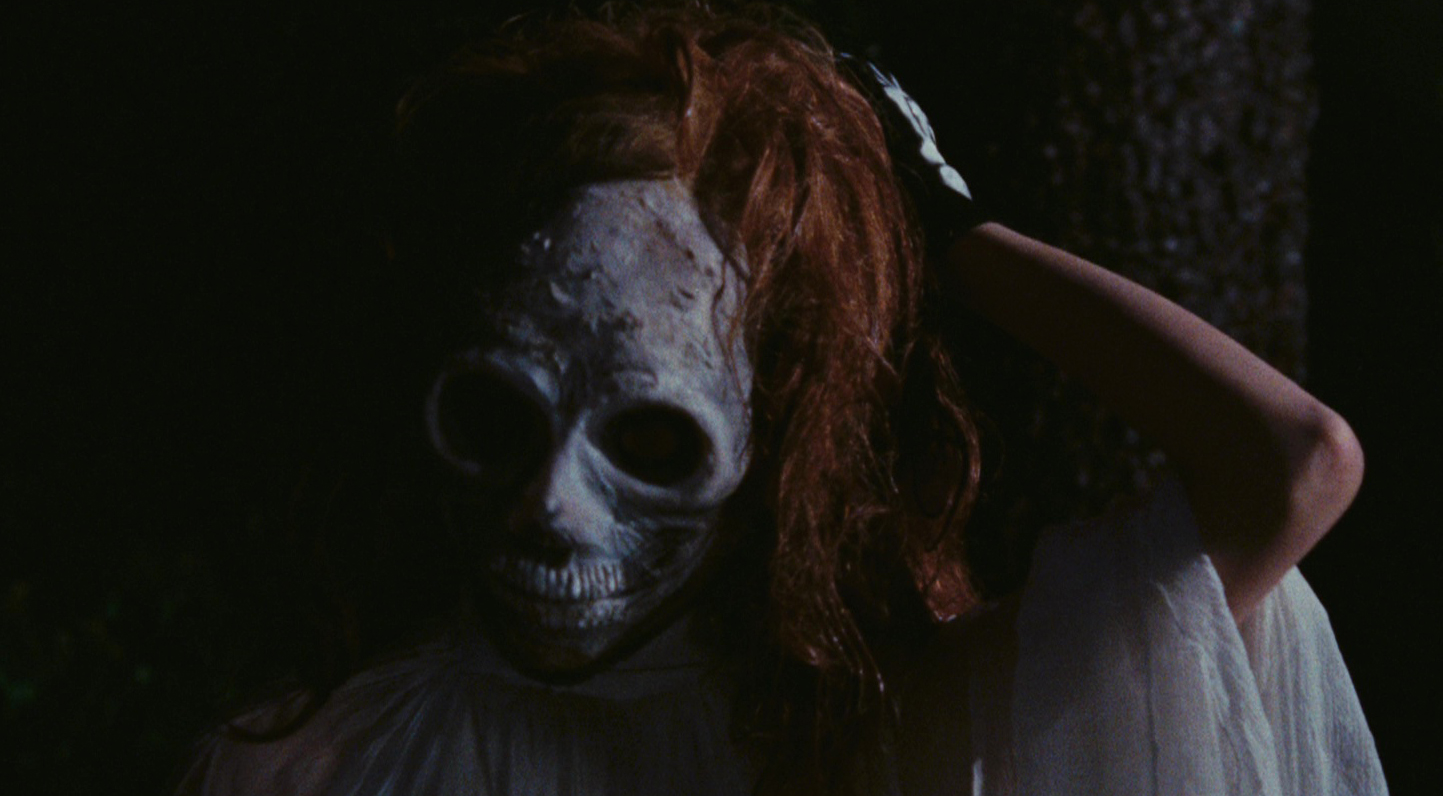 Throughout the 1960s and into the mid-1970s, two very different kinds of films dominated the Italian horror genre, each accompanied by their own distinctive iconographies. The gothic style is frequently associated with the remote past, cobweb-strewn castles, and ancestral curses, while giallo films emphasize the perils of modernity, and usually feature a masked and black-gloved killer picking off unsuspecting, albeit not always entirely undeserving, victims. As a rule, these modes were kept far apart. Still, one can point to a few illustrative exceptions, like Mario Bava’s unfairly maligned Baron Blood.

Then there are a matched pair of films from writer-director Emilio P. Miraglia, an elusive figure about whom little biographical information is available. Miraglia turned out only six films over the course of his attenuated career, working mostly in the crime thriller or poliziotteschi genre, but his two horror titles make for wildly entertaining—if, at times, somewhat unfocused—case studies in the fusion of gothic and giallo styles. Judging by the outside work of his screenwriting collaborators, Miraglia seems to have been the one inclined to bring the gothic chills, and it’s interesting to see how each film tips the scales in favor of one mode or the other.

From its first scenes, The Night Evelyn Came Out of the Grave basks in its gloomy gothic ambiance, as Lord Alan Cunningham (Anthony Steffen) brings a buxom, redheaded pickup (Maria Teresa Tofano) back to his dilapidated ancestral manse. Alan leads the increasingly nonplussed Polly through long-unused rooms encrusted in layers of dust, until, in the film’s first ironic kicker, he pushes open a door to reveal a clean, bright, fashionably furnished bedroom. But even this modernist space isn’t entirely free of gothic trappings: An eerie portrait of Alan’s deceased wife, Evelyn, presides over one corner, in the first of the film’s several references to Hitchcock’s Rebecca. Alan hasn’t brought Polly here just to try on the dead woman’s haute couture; he leads her into a well-appointed torture chamber to engage in some sadomasochistic foreplay before stabbing her to death.

For its first half, the film portrays Alan as a deranged killer bent on wreaking vengeance on a succession of red-haired women for the visions of his wife’s infidelity that continue to torment him. But even in these early stages, there are signs that all is not what it seems. On a tip from helpful cousin George Harriman (Enzo Terascio), Alan visits the Krazy Kat club to view the performance of russet-locked Susie (Erika Blanc), whose well-received routine has her rising derrière-first from a coffin. Miraglia makes a subtle in-joke here by invoking the Krazy Kat comic strip and its author, George Herriman, thereby clueing us in to the fact that Susie’s little number bears a playfully perverse resemblance to the title’s promise of corporeal resurrection.

The Night Evelyn Came Out of the Grave abruptly switches gears with Alan’s subsequent out-of-leftfield marriage proposal to strawberry blonde Gladys (Marina Malfatti) after knowing her all of two hours. Now the film begins to position Alan as the hapless victim of a cynical gaslight attempt, with spectral sightings and forays into the Cunningham family crypt imbuing the middle section with high gothic atmosphere, before revealing the full details of the plot against Alan in a scene that could’ve been lifted straight from an Ann Radcliffe novel. The film’s final act sees a sudden shift in venue to an ultrachic villa outfitted with prismatic metal blinds, stark white furnishings, and oversized Pop Art paintings. In these final reels, the film hews mostly closely to the giallo style, with a series of byzantine double- and triple-crosses that leave the villa strewn with bloodstained corpses.

The Red Queen Kills Seven Times also features an uncanny portrait and a character named Evelyn who may have returned from the dead. But the resemblance more or less ends there: The film spends most of its time in modern-dress settings, with much of the action centering around the Munich fashion house owned by the Wildenbrück family. A series of murders among their employees seems somehow connected to a family legend about fractious siblings—illustrated in the aforementioned portrait—that’s been obligingly laid out for us by patriarch Tobias (Rudolf Schündler) in the film’s prologue: One sister, known as the Red Queen, returns from beyond the grave to seek revenge by killing six strangers before finally taking her sister’s life.

Grandpa Tobias spins his yarn for two young girls—one fair, one dark—in fitting fairy-tale fashion. Except, in the film’s present tense, we’re introduced to two blondes: Kitty (Barbara Bouchet) and Franziska (Malfatti again). What ever happened to dark-haired Evelyn remains the film’s central mystery, and where the third sister came from is anybody’s guess. The Red Queen Kills Seven Times soon settles into an archetypal giallo groove, complete with nondescript police inspector (Marino Masé) and an abundance of red-herring characters—including one played by a young Sybil Danning—who get bumped off with startling regularity. Descriptions of the assailant, naturally enough, tally with that of the missing Wildenbrück sister.

Miraglia’s films don’t seem particularly susceptible to the downright illogicality of the surreal, preferring instead the moment of hesitation between the supernatural and the rationally explicable that defines “the fantastic” according to late literary critic Tzvetan Todorov. And yet, smack in the middle of The Red Queen Kills Seven Times, Miraglia lets loose with one spectacular dream sequence that yields an indelible image: The red-caped killer sprints down a long, brightly lit hallway in what appears to be an empty office building, wildly gesticulating with her bloody implement, only to run up against Kitty asleep in her bed, nestled against the head of a stairwell.

The Red Queen Kills Seven Times’s conclusion inverts that of the previous film by being set among the dank gothic cellars of the Wildenbrück’s chateau: Kitty finds herself trapped in an underground vault slowly filling with water—as well as lots of water-logged rats. This cliffhanger-y finale seems to take its cues from a Louis Feuillade serial, or one of those German Krimi films based on the works of Edgar Wallace. Whatever the inspiration, it’s an expertly staged sequence, and resolves the narrative in a generically satisfying, albeit entirely conventional, sort of way. Then again, Miraglia’s films never aspire to cut against the generic grain in the subversive manner of a Dario Argento. But apart from their many superficial pleasures, they nevertheless provide an ideal illustration of how canny filmmakers can mix-and-match genre elements to produce something new and entirely idiosyncratic.

Emilio P. Miraglia’s The Night Evelyn Came Out of the Grave and The Red Queen Kills Seven Times are now available on Blu-ray and DVD from Arrow Video.