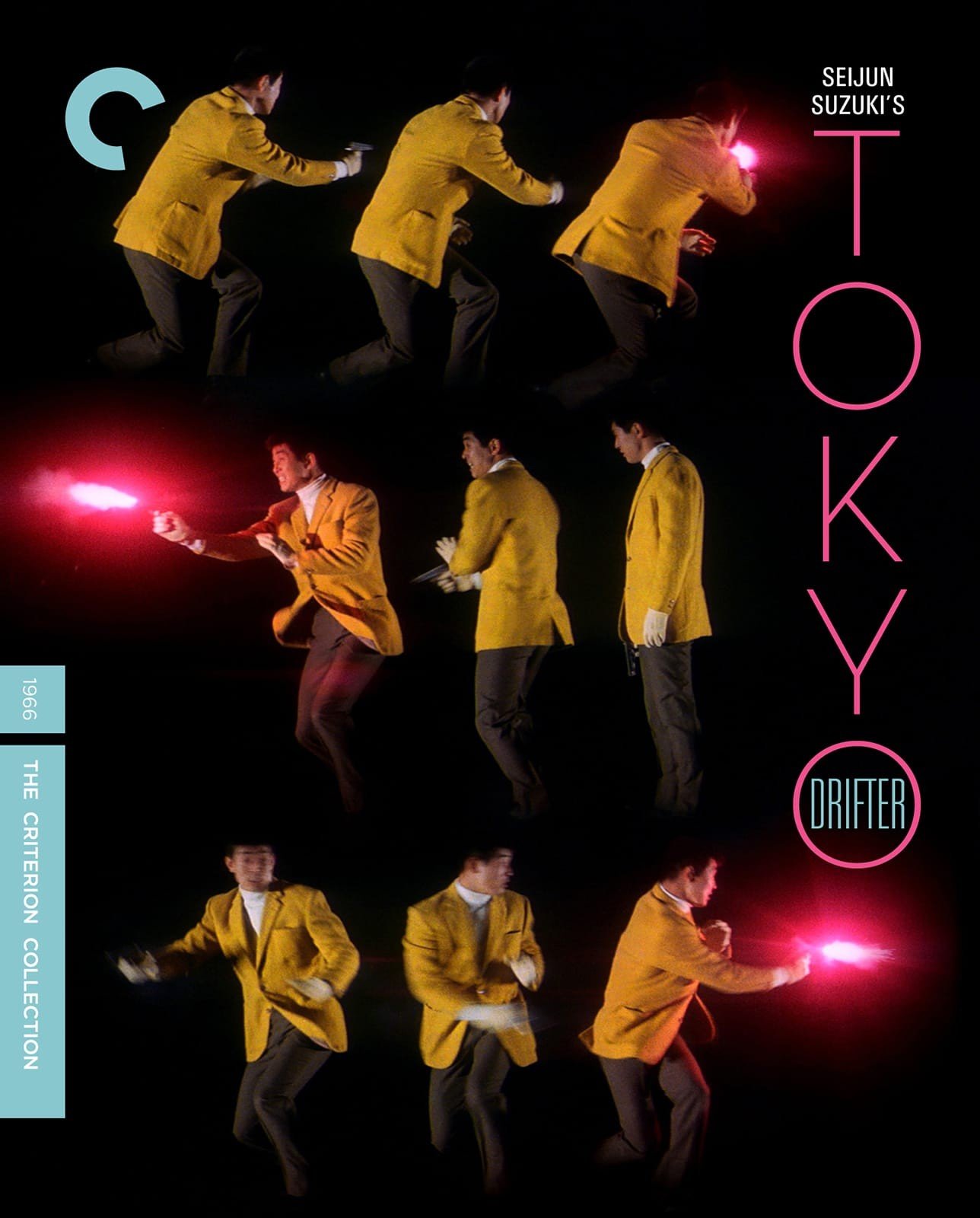 Over the course of his career at the Nikkatsu studio, brazen B-movie maverick Seijun Suzuki perfected the art of subversion from within, eradicating any vestige of predictability from his freewheeling forays into genre experimentalism. With Tokyo Drifter, studio heads handed the director a pedestrian yakuza film, yet another ode to the honor code espousing unthinking loyalty to one’s superiors (and including multiple musical numbers, no less), with the express intention of turning its baby-faced lead actor, Tetsuya Watari, into an overnight sensation. It didn’t hurt the film’s box-office prospects that its faux-forlorn title song, as performed by Watari, was already in the can.

Given these typically stringent dictates, Suzuki seems to have decided to turn the entire project on its ear: ruthlessly eliminating whatever connective tissue the dandelion-slight narrative might once have possessed, breaking its action sequences down into virtually unrelated one-offs, disorienting and deconstructive studies in acausality. Revealing a flair for homegrown surrealism, Suzuki brings the defamiliarization effects of “dream work,” condensation and displacement, to bear on Tokyo Drifter, yielding the most termite-like among his works (to invoke Manny Farber’s term), a film that leaves “no sign that the artist has any object in mind other than eating away the immediate boundaries of his art, and turning these boundaries into conditions of the next achievement.” Branded to Kill, Suzuki’s final film for Nikkatsu, after which the studio promptly fired him, attempts to escape the prison house of genre entirely, morphing into a fever-dream series of nightmare tableaux, but Tokyo Drifter seems satisfied to beat its head against the walls of its solitary-confinement cell.

In the washed-out monochrome opening sequence, Tetsu “the Phoenix” (Watari) withstands his first temptation, taking a beat-down in a railroad yard rather than “explode,” as one of the rival gang members believes he will, in order to prove his fealty to former yakuza boss Kurata (Ryuji Kita). When the pummeling’s over, Tetsu picks himself up from the rubble-strewn ground, coming across a shattered plastic toy gun; its shiny red pieces signal Tokyo Drifter’s abrupt shift into neon-bright color photography. Mob boss Kurata has gone legit, deactivated his gang, and sworn its former members against acts of retributive violence. The nonviolence routine doesn’t last very long, though, when rival gang boss Otsuka (Hideaki Esumi), whose presence in early scenes is metonymically signified by glimpses of his dark glasses and flashes of his bright crimson suit, tricks Kurata out of his prize piece of real estate. Kidnappings, car chases, and pitfalls occur almost off-handedly, the plot barreling along like a runaway locomotive, its narrative couplings de-articulated and threatening to derail the film entirely.

The first act ends in a shootout between gang bosses staged like experimental Kabuki theater; Suzuki shifts the background from nominal naturalist to two-color expressionist, swaths of white and red (perhaps an ironic evocation of the Japanese flag?) fill the windows’ negative spaces; as one character falls down dead, the camera ascends to an omniscient God’s-eye view, and the décor completely alters again, this time begging comparison to a Jackson Pollock action painting. Entirely unmotivated by plot exigencies or character psychology, similarly baroque flourishes establish Suzuki’s WTF approach to action scenes throughout Tokyo Drifter.

In keeping with its vagabond nature, the entirety of Tokyo Drifter amounts to less than the sum of its charmingly discrete parts, whether a supernumerary montage following the progress of a crushed car, or a snowbound gunfight that emulates John Ford’s Stagecoach. (A saloon brawl late in the film emphasizes this indebtedness to the western genre.) Across the board, redolent imagery trumps all except mood; a world-weary disillusionment creeps into the film’s final act when Tetsu learns that his beloved boss Kurata has betrayed him and forged an alliance with rival Otsuka.

The film ends with yet another climactic gunfight that takes place against a black-and-red-drenched backdrop that easily could have been ripped straight from “Girl Hunt,” Vincente Minnelli’s noir-baiting The Band Wagon number; it’s a scene that wallows in self-parody, as Tetsu guns down everyone in the room, in increasingly improbable and ultimately ridiculous fashion, except Kurata and Tetsu’s chanteuse gal, Chiharu (Chieko Matsubara), who dutifully throws herself upon Tetsu’s embrace. But the bittersweet drifter lifestyle has its hooks in Tetsu, and he defaults to Existential Loner mode, telling Chiharu there’s no room for a woman in his worldview.

Replacing a studio-nixed final shot that had a lovelorn Tetsu crooning his “Tokyo Drifter” number at a rising green moon (an outsized WTF finale, if ever there was one), Tokyo Drifter now concludes with a white suited Tetsu, posed atop an all-white staircase, belting away at a montage of neon signs drawn from both the red-light district and the go-go Ginza shopping quarter. Commerce reigns over Tokyo. With no less certitude than JLG, who manifested Masculin Féminin the same year, Seijun Suzuki, keyed into the tenor of his times, realized we’re all the children of Marx and Coca-Cola, the bastard offspring of global capitalism.

Another impressive Blu-ray upgrade from Criterion’s extensive back catalogue, all the more so given the original DVD’s non-anamorphic transfer and lack of supplementary features. The 2.35:1 widescreen image on the Blu-ray is nothing short of luscious: the pop-art colors, densely saturated and vibrant as a DayGlo dream, threaten to burst right out of the frame; even the overexposed black-and-white stock used for the opening scene startles with the amount of clarity and brightness it manages to convey. The Japanese mono audio track is more than adequate to its limited needs, letting Hajime Kaburagi’s jazzy score hit its syncopated beats with verve.

Two interviews with Seijun Suzuki provide the bulk of the extra features. The first, filmed earlier this year, stitches together talking-head footage of a frail-looking Suzuki, tethered to an oxygen tank but still plucky after all these years when it comes to discussing his films, and assistant director Masami Kuzuu, along with archival and on-set photos; the other was conducted in 1997 as part of a retrospective of Suzuki’s films at the Nuart Theater in L.A. Both cover noticeably similar material, the former focusing entirely on Tokyo Drifter, while the latter contains Suzuki’s far-flung thoughts on the art of directing and the state of contemporary Japanese cinema. Suzuki amusingly describes how star Tatsuya Watari had a tendency to freeze up and forget his lines, until prompted by an AD armed with a broomstick. There’s also an HD-enhanced theatrical trailer, as well as a booklet containing an insightful essay written by Howard Hampton.

Wander along with Tokyo Drifter’s pop-art hijinx, presented in eye-popping 1080p by the Criterion Collection.

Review: Detective Dee and the Mystery of the Phantom Flame on Vivendi Blu-ray