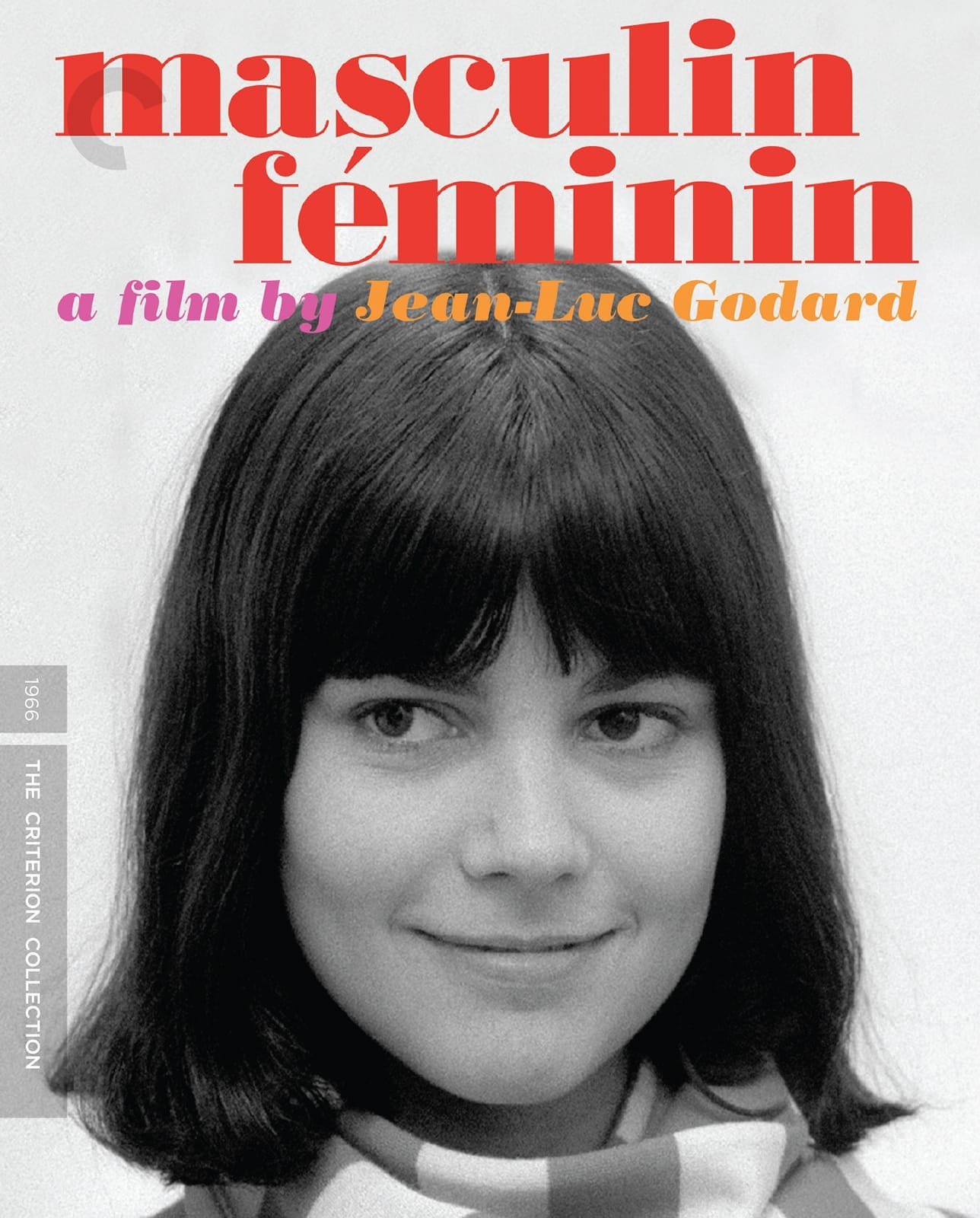 The title of Jean-Luc Godard’s Masculin Féminin saw many incarnations after the film’s release in France in 1966. Once there was a comma between Masculin and Féminin, which many wanted to drop so as to allow the empty space to serve as a literalization of the gender divide. Maybe some thought the comma was a symbol of second-class citizenship; indeed, women do not follow men in Godard’s film, but rather they’re inextricably bound to them. Hence Masculin-Féminin, which put the Masculin and Féminin on a more even keel (spin the title around 180 degrees and the woman comes first—now upside down but first nonetheless). Then there was Masculin/Féminin, not because men sit on top of women, but because masculinity is more easily divisible than femininity, or so Godard would have us believe.

Masculin Féminin was somewhat of a turning point for Godard, allowing the Novelle Vague auteur to address for the first time the current political climate of the world in one of his films. In many ways, this is the perfect Godard film—complex but accessible, critical but sympathetic—and in many ways anticipates 1967’s Weekend. The film is a provocative and deliriously funny examination of sexual politics in Paris during the height of the Vietnam War, and its genius is the way Godard seamlessly encodes his complex philosophy of the world into a deceptively simple love story between an ex-army recruit, Paul (Jean-Pierre Léaud), and a would-be pop singer, the beautiful Madeleine (Chantal Goya). This is first-class “Freudemocracy,” a term Godard coined to describe the sexual-political potential of film.

Not only does Paul’s battle with Madeleine represent a war between the sexes, it’s also a clash between disparate philosophical and moral beliefs. Godard claimed never to have read Karl Marx, but he coined the word “Cinemarx” to describe a Marxist form of cinema that Masculin Féminin truly, madly, deeply espouses. Call the film “The Cinemarx Manifesto.” Paul is anti-bourgeois and resents America’s involvement in Vietnam, but his gripes aren’t anti-American per se. Godard considers pop culture a dangerous American export and he questions the political apathy of images and music that don’t incite people to revolution (this is the impetus of his provocative but off-putting Rolling Stones documentary Sympathy for the Devil).

“A philosopher is a man who pits his awareness against opinion. To be aware is to be open to the world.” How sad, then, that Paul’s posters (provocations encouraging the politically unwashed to votez) are ignored, unseen even, by Godard’s “children of Marx and Coca-Cola” (a quote that remains, almost perversely, the filmmaker’s most enduring contribution to our collective pop-cultural vernacular). Popular culture essentially creates a party line between Paul and Madeleine and Godard’s use of montage and off-screen space suggests this separation. In Masculin Féminin, men and women spar. But so do the film’s images, slipping and sliding against each other as if Godard were shuffling a paradoxical set of cards, and every image has the urgency of a vote cast into a ballot box that can no longer be retrieved.

It’s telling that so many have tried to weaponize the syntax and space between Masculin and Féminin in the title of Godard’s film. The battle of the sexes wages on and we’re still trying to figure out how to navigate the interzone. A man is a man and a woman is a woman and Masculin Féminin is what it is: a philosophical theory in the shape of an elaborate algebraic equation—15 contrapuntal vignettes (ludicrous and gross political and sexual confrontations) separated by signs (Godard’s signature intertitles) that add, divide, multiply, or subtract the meaning of individual or collective vignettes—that stresses the everlasting, unexplainable complexity (the joy and frustration) of the war between man and woman.

Masculin Féminin is very much the Cinemarxist embodiment of Marx and Friedrich Engels’s Communist Manifesto. Both are morally, politically, and philosophically inquisitive, and as long as the proletariat fights the bourgeois and men fight women, people will continue to return to them. But unlike Marx and Engels, or Paul for that matter, a more self-aware Godard seems to understand that pop culture, like wage labor and capital, isn’t going away. Which is why Godard doesn’t ask for the eradication of pop culture. Instead, he champions a marriage between image and action, both personal and political. If American pop culture is the devil, Godard not only has sympathy for it, he also tries to navigate and empower it.

Even though Godard likens Madeleine to a consumer product (she and Paul talk to each other as if they were recording and cutting their conversation inside a studio), she’s less a slave to the pop culture that’s shaped her consciousness than Paul is to his communist principles. Godard understands that music—not to mention the threat of a “clothes rod” abortion—implies Madeleine’s freedom of expression, but this is an implication that Paul fails to gauge. Is it possible, then, that Godard recognizes a little bit of himself in Paul, a man whose politically active proletariat spirit gets in the way of his having fun?

In the film, Godard poses a theory that “masculin” can be divided into two words: “masque” (mask) and “cul” (ass). Because Paul is a sexual being, he naturally chases after Madeleine’s ass and, in effect, makes an ass of himself. As for the “masque” in the word, one could argue that this is the arterial political and moral motive masked by the sex drive (call this untapped or unseen potential). Paul and his equally arrogant friend seem to claim dominance over the female sex because “feminin” can’t be divided into. Oh, but it can; they just haven’t figured out a way to do so. Naturally, of course, the last shot of the film acts as a female-empowering solution to Godard’s philosophical algorithm of the sexual politic. FIN.

Sourced from a 4K restoration by Argos Films, the Criterion Collection’s Blu-ray represents a startling upgrade in terms of image over the old DVD from 2005. Where their earlier release suffered from soft detail, visible scratches and debris, and numerous transfer issues in accurately reflecting the blacks and whites of the cinematography, this new disc absolutely sparkles. Faces and backgrounds reveal pin-sharp definition throughout, while the exterior, Paris-shot sequences no longer appear washed out. The audio, though limited by the flatness of the source soundtrack, is free of any noticeable flaws, maximizing the separation of elements. Most improved over the previous DVD is the clarity in the direct sound recording of street bustle, which no longer drowns the presentation in crackle and hiss.

In a bubbly 1966 interview, actor Chantal Goya talks about working with Jean-Luc Godard, owning her own shop one day, and how boys seem to like Masculin Féminin more than girls. Almost 40 years later, Criterion visited the much older and wiser Goya, who recalls meeting Godard for the first time, the censorship that greeted the film, the praise she received for her performance, and her failed career in cinema. Cinematographer Willy Kurant talks lovingly about how he convinced Godard to use special Kodak stock and how the tests he did with Jean-Pierre Léaud can be seen in the film, and Jean-Pierre Gorin discusses his collaborator’s countless influences (Roberto Rossellini’s Journey to Italy among them) and the impact of the film. Also included here is a lengthy video discussion between French film scholars Freddy Buache and Dominique Paini, Swedish television footage of Godard directing the “film within the film” scene (supposedly a parody of Ingmar Bergman’s The Silence), the film’s original trailer, and its 2005 re-release trailer. A booklet included with the disc features an essay by film critic Adrian Martin and a reprint of a report from the set by French journalist Philippe Labro.

Though it lacks any new bonus features, Criterion’s upgraded transfer of one of Jean-Luc Godard’s less-celebrated ’60s gems is a massive improvement over its standard-def forbearer, meaning Masculin Féminin is ripe for renewed appreciation.