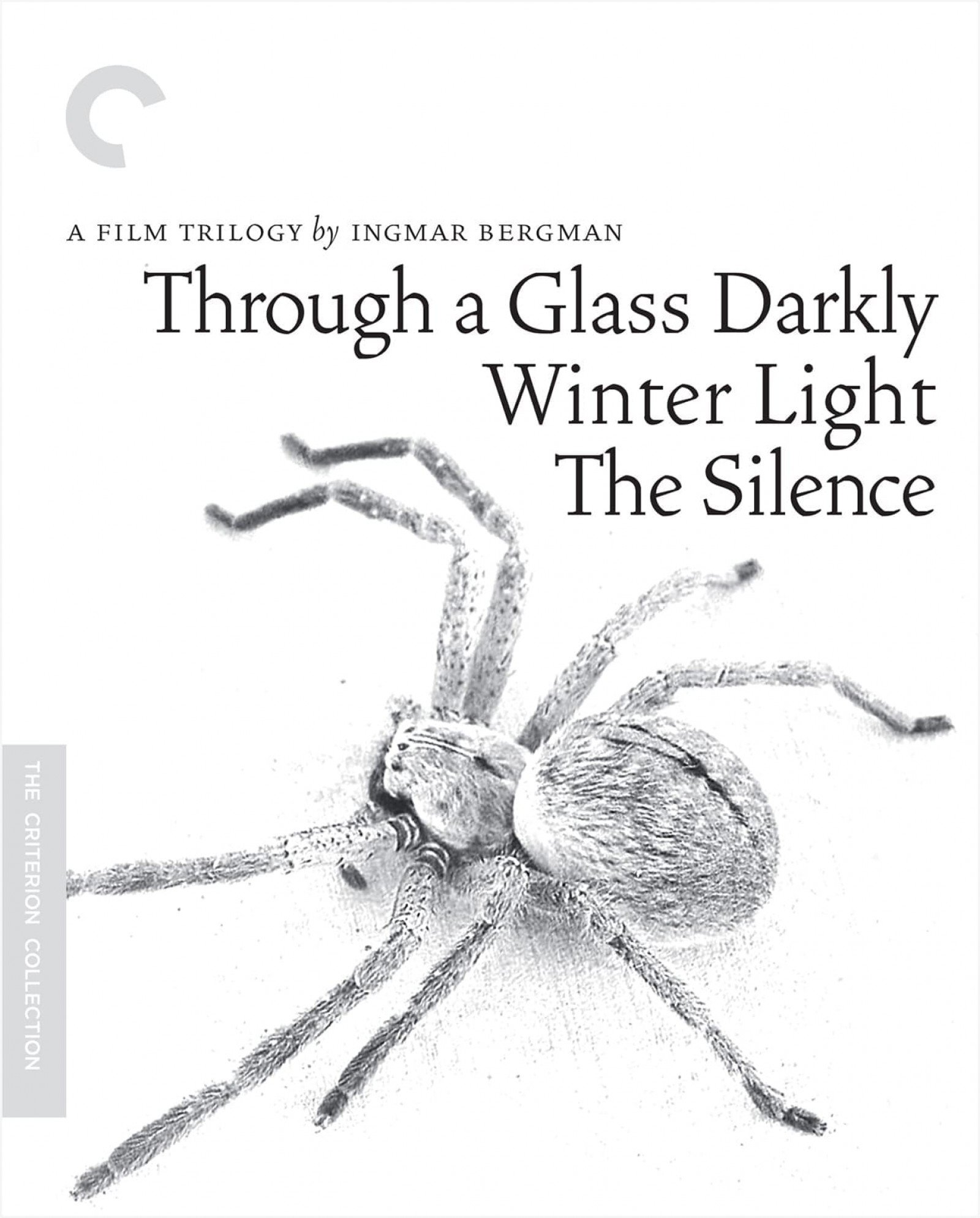 The subject of Ingmar Bergman’s self-designated Trilogy of Faith is nominally the absence of God in everyday life—a classical theological conundrum, perhaps, but it’s one that Bergman’s films suggest is made more acute by the distinctly modern threats of nuclear apocalypse, world war, and general social anomie. But the uniting theme of this trilogy may as well be the impossibility of intimate heterosexual relationships, as in each of these films the bonds that tie men and women together snap under pressure, or are already irreparably shattered.

In the first film, 1961’s Through a Glass Darkly, Harriet Andersson gives a harrowing performance as Karin, a young woman whose mental health is in decline. At her family vacation home in northern Sweden with her father, David (Gunnar Björnstrand), her teenaged brother, Minus (Lars Passgård), and her husband, Martin (Max von Sydow), Karin hears voices coming through the crack-ridden walls of a neglected attic room. In nearly silent, expressionistic sequence, Bergman evokes her simultaneous anguish and ecstasy as she experiences a kind of perverse rapture in the empty room. The film never visualizes Karin’s hallucinations, but it suggests their intensity by stylizing the room as a space of starkly contrasting lights and darks, the haunting glow coming from a single window seemingly not affecting the utter blackness of the splintered walls.

Meanwhile, the men in Karin’s life prove unable to humanely cope with her condition. She confesses to Minus her horrifying, sexually tinged fantasies of God visiting her in the form of a spider, and the sexually confused Minus becomes infatuated with her. David, a novelist, keeps his distance in part because of the guilt he feels for exploiting Karin’s illness, using it as the basis for a (highly eroticized) character in the book he’s writing. Karin discovers that even her bookish, outwardly sensitive husband has been keeping the true scope of her diagnosis from her, maintaining a diary in which he clinically logs the progress of her disease. Bergman’s bleak look at domestic life is shot through with suppressed and displaced sexual desire, a deconstruction of the family unit whose Freudian overtones are accentuated by the way the betrayal of the father is tantamount to the discovery of a malicious, sexually threatening god.

Bergman moved from Freud to Sartre, from anguished expressionism to dire asceticism, with 1963’s Winter Light, in which a doubt-plagued Lutheran minister, Tomas (Björnstrand), finds himself unable to offer solace to Jonas Persson (von Sydow), a member of his dwindling congregation for whom global nuclear proliferation has inspired intense existential panic. Persson commits suicide later the same afternoon, and Tomas must grapple not only with his own encroaching lack of faith, but not having provided the man with effective counsel. The image of a spider-as-God recurs—it’s now Persson’s image of a silent, creeping, and indifferent omnipotence that Tomas finds he must reconcile himself to.

Also in Winter Light, though, the dissolution of the bond between man and God manifests itself in a disturbance of the relations between men and women. Tomas’s crisis of faith is rooted in the death of his wife some years ago, since which time he’s been ardently cared for by his childhood friend, Märta (Ingrid Thulin). Märta is a local teacher who attends Tomas’s services despite her professed atheism, and whose unconditional love represents to Tomas a dual threat: Accepting it would mean not only moving past his wife’s death, but finally accepting that love is possible in the absence of God.

Winter Light captures the powerlessness of religion in a world overseen by an uncaring, de-anthropomorphized god, with Bergman’s lingering shots of listless churchgoers and a bored organist, lit by the pale sun of a brief winter’s afternoon, almost tending toward comedy of the absurd. Though the film isn’t without a sense of humor, it’s difficult to call it a comedy, particularly given its sober portrayal of utter helplessness, as well as the climactic confrontation between Märta and Tomas, in which Tomas hurls invective at the caring schoolteacher—not despite her abiding love for him, but because of it. Winter Light proves to be the strongest of these three classic films: Märta and Tomas are the trilogy’s most fully realized characters, much more than ciphers for a theological dialectic, and the film’s pared-down style puts the keenly felt performances by Björnstrand and Thulin at the center.

Bergman, of course, deserves much credit as a director of actors. The Silence, with its loose, meandering story, depends on commanding performances from Thulin and Gunnel Lindblom as Ester and Anna, a pair of sisters lodging in a hotel in an unnamed, presumably Eastern European country on the eve of war. In a classic modernist alienation device, Bergman doesn’t bother with a reason that the two sisters should be visiting the country; nor does he translate the smatterings of foreign dialogue we hear from natives throughout the film. True to the title, characters in the film are largely silent or unintelligible, and the hotel, seen through the eyes of Anna’s young son, Johan (Jörgen Lindström), takes on qualities of a magical labyrinth.

There’s little direct conversation about God or religion in The Silence, but contextualized with the two previous films, it’s easy to see the film continuing the dissolution of the world and family that began in Through a Glass Darkly. A totally absent God leads to a splintered narrative, and a splintered family: Johan’s father is pointedly absent from the film, and a conflict between the sickly Ester and the beautiful Anne, based in sexual jealously and envy over Johan’s affections, leads to a schism between the sisters. In the stylistic evolution from the first film to the third, we can also see the Bergman who would direct 1966’s arthouse classic Persona emerging. The Silence isn’t only more avowedly modernist than the previous films in its intentional obscurity and penchant for the bizarre and alienating, but it also brings Bergman’s interest in women’s interior lives to the fore, for better and for worse.

Nevertheless, The Silence is a landmark in early-‘60s European cinema, clearly in conversation with the innovations in the representation of time, space, and cognition being undertaken around the same time by filmmakers such as Alain Renais, Agnés Varda, and Michelangelo Antonioni. Bergman’s three films constitute a liminal trilogy, bridging not only two epochal worldviews, but also two styles of European filmmaking, arriving at a freer experimentation with narrative form. It’s logical, though, that the most compelling of these films remains Winter Light—the one whose story and style positions it just on the precipice of this dual transition—as it captures best the perpetual crisis that modernity has made of the present.

The transfers are derived from new 2K scans of each film, which exhibit marked improvements upon earlier home-video releases. These improvements are most readily apparent in Winter Light, whose use of bright, diffused light was washed out on the 2003 DVD. Here, the detail captured by Sven Nykvist’s cinematography is easier to appreciate, giving the anomalous shots of wooden crosses and altars in the austere Lutheran cathedral more inherent visual interest, without sacrificing the bleakness connoted by the uniformly lit space. The other two films make more use of high-contrast lighting, reproduced on the Blu-rays with stable blacks and an utter lack of visual artifacts. The sound for each film is based on remastered versions of the original 35mm soundtracks. The most striking aspect of the films that the remastered soundtracks bring to bear is, appropriately, their silence. Bergman’s sparing use of music, his methodical deployment of environmental sounds, and his emphasis on direct, piercing dialogue is more apparent on these tracks, which are free of hisses or pops.

Criterion’s re-release of this 2003 box set includes an entire fourth film: Vilgot Sjöman’s Ingmar Bergman Makes a Movie, a documentary for Swedish television about the making of Winter Light. The film’s extended interviews with Bergman and Sven Nykvist, and in particular the pair’s discussion of their meticulous studies of how afternoon light is diffused in the space of a cathedral, add dimensions to second viewings of Winter Light.

The set compensates for its lack of commentary tracks with two introductions for each film: one by film scholar Peter Cowie, and another by Bergman himself, recorded at his home on the island of Fårö island in 2003. Cowie’s detailed introductions are particularly adept at providing biographical background to Bergman’s musings on religion. Bergman’s are comparatively brief, but there’s an inherent interest in watching the now-deceased octogenarian lounging in his private theater, discussing decades-old masterpieces. Also on the discs are archival interviews with Björnstrand, Andersson, and Nykvist, new to this edition of the trilogy. In all, the extras on the Blu-ray discs present a much more robust offering than on the 2003 release.

The booklet features an insightful analysis of the films as a “philosophical reduction” of religious certainty by film scholar Catherine Wheatley, as well as “God Said Nothing,” a brief excerpt from Bergman’s autobiography. While these new pieces are welcome, oddly missing are the three essays, by Cowie, Leo Braudy, and Peter Mathews, included on the 2003 release.

Bergman’s Trilogy of Faith, a watershed moment of transition both in the filmmaker’s career and in world cinema, gets faithful treatment from the Criterion Collection.

Blu-ray Review: Marco Bellocchio’s Fists in the Pocket on the Criterion Collection