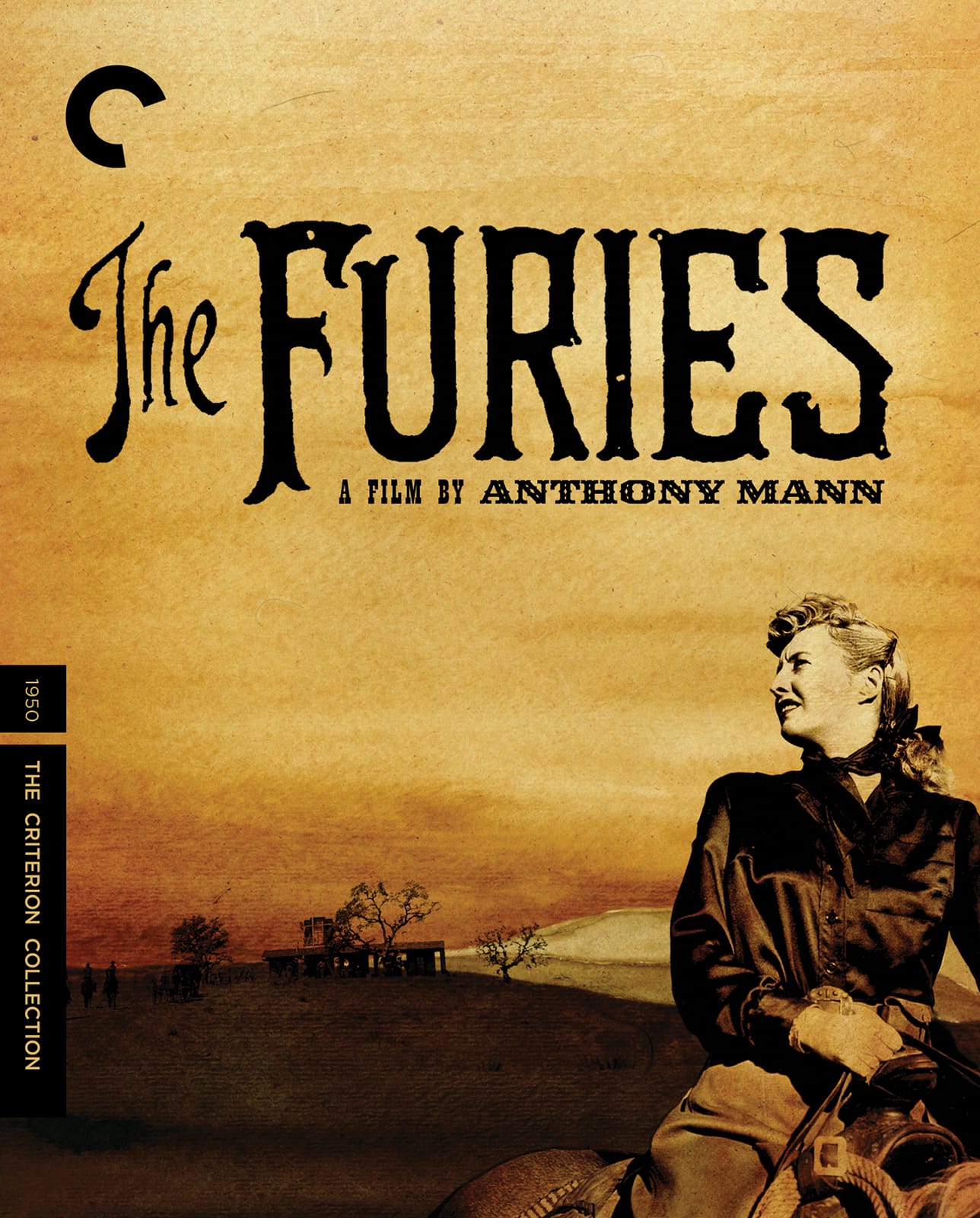 The title of Anthony Mann’s 1950 western The Furies, set in 1870s New Mexico Territory, contains multitudes. It’s the name of the sprawling ranch owned by T.C. Jeffords (Walter Huston), who’s united hundreds of acres of the territory through swindling and killing. More suggestively, the title is an unstated allusion to the female deities of vengeance in Greek myth, and one that underscores T.C.’s myopic vanity, as he clearly sees the ranch’s name as a celebration of his waning virility and power. Most pointedly, the title portends the wrath that T.C. will provoke from his daughter, Vance (Barbara Stanwyck), who’s taken the trouble to understand the social and financial mechanics that drive their ranch, while T.C. struts around drunk on his vaingloriousness. But above all, those primordial, Faulkner-evoking words—“the furies”—encapsulate the waves of unmooring emotions coursing through this extraordinary film.

Today, it’s fashionable to use cultural barometers to measure the worth of a film in terms of representation. In many cases, representation has become simply a box to be checked off. By contrast, Mann’s film casually takes women’s power as a given from the first frames. As in many a Shakespeare tragedy (especially King Lear) or work of English gothic literature—two forms that clearly inspired The Furies—the men do the showy work while the women subtly control the kingdom, manipulating the men by placating their egos.

T.C. is an aging hustler—played by Huston in full-tilt peacock mode—now consciously playing the role of the American baron, while Vance runs the ranch’s books, commands the staff, and maintains alliances with the town and “the squatters,” or the people who have ancestral claims to T.C.’s land. Other men in The Furies, especially Vance’s emasculated brother, Clay (John Bromfeld), are similarly distracted. Tellingly, Vance’s most formidable rival is more practiced than she in the art of leading a man by the nose, Flo Burnett (Judith Anderson), a pretentious grand dame who aims to become T.C.’s next wife.

The Furies, though, is most certainly not a dry sermon on gender dynamics. In the vein of other daring ’50s-era noirs and melodramas, the film is a lyrical work eaten up with psychosexual sickness. Vance is first seen dressed as her mother in the dead woman’s long-preserved bedroom, which suggests a chamber in a wax museum. When T.C. returns to the Furies from a trip, Vance descends the elaborate stairwell bisecting their house (a design element that suggests a psychological split) in the dress and greets him as one might a lover.

Mann slyly stages the sequence as a romantic reunion, as T.C. and Vance exchange glances that reflect their passions and narcissism; what this father and daughter pair love most about the other is the shared sense of similarity. This coiled eroticism is exorcized with a kiss on the lips, though the tension is regenerated by body language and dialogue that cunningly mingles sex and business. It clearly turns Vance on to watch T.C. blackmail a banker for instance, and he’s stating the obvious when he says he’s ruined her for other men.

These are only a few strands among the film’s tapestry of neurotic entanglements, which convincingly suggest that America’s formation was at its heart driven by repressed lust. Mating in The Furies, as in life, is influenced by status, which in turn is generated by the amassing of wealth and land. T.C.’s inability to “tame” Vance is mentioned often, and rhymed and physicalized with images of men riding across the land and wrestling livestock down to the ground. One of the squatters, Juan Herrera (Gilbert Roland), is a decent man who loves Vance, a woman who’s also loved him for years but who might not quite truly respect him; he may deserve the land, but he doesn’t have the means or even the temperament to take it.

More suitable for the queen of the Furies is Rip Darrow (Wendell Corey), a gambler, entrepreneur, and enemy of T.C.’s who breaks Vance in as one might an unruly horse by roughing her up and dunking her head in a bowel of water. This sequence, unimaginable in a contemporary film, is shocking less for the violence than for its matter-of-fact admission that—political correctness be damned—some women like this kind of treatment. Rip wants a piece of the Furies and, unlike Juan, is willing to fight T.C. on his own dirty terms to get it.

Subversively, The Furies compels us to root for Rip, an architect of the grossly unequal America of the present, rather than the dully virtuous Juan, who’s a symbol of the original victims of American white supremacy. The important difference between them is less about morality and entitlement than charisma. The Furies is in touch with something that’s perhaps uniquely American: people’s ferocious need to do and have whatever they want, and regardless of the consequences and what others think. Such a guiding impulse is embodied by, say, the hysterical resistance to masks in our pandemic era, which is over-corrected by the protests of the woke-era puritans who’re intent on sanitizing every unseemly human urge.

Unlike Mann’s other revenge westerns, The Furies suggests less a single-minded straight line than a poisoned thorn bush growing in on itself, with shifting loyalties and mercenary impulses cutting characters off from one another, driving them to a frenzy that Mann and cinematographer Victor Milner evoke through beautiful gothic imagery, especially the shadowy vistas that are redolent of the haunted landscapes of Orson Welles’s Macbeth. The harshest sting comes at the film’s end, in a perverse conclusion that can be misread as a sentimental restoration of status quo. T.C. and Vance may reunite, but Juan and Flo are brutally, poignantly forgotten. Because The Furies, a truly American fable, is concerned with the survival of the most inventive, the best armed, and the most shameless.

The clarity of this transfer’s image emphasizes the film’s visual sophistication and sense of experimentation. The Furies opens with fairly conventional, if accomplished, black-and-white lighting that’s gradually subsumed by darkness; in other words, the film subtly becomes expressionist, with compositions cloaked in supernatural shadows that underscore the considerable psychological turmoil driving the narrative. The blacks and whites are all quite sturdy, and D.P. Victor Millner’s gorgeous and foreboding deep-focus compositions are pristine. Facial and clothing details are also ecstatically vivid, most notably in a wedding sequence during which social statuses are demarcated by wardrobe. Equally robust is the LPCM mono track, which abounds in powerful diegetic sounds and knows when to pull back and provide Franz Waxman’s score with the space to operatically soar.

An audio commentary from 2008 featuring Jim Kitses remains an exemplary one-stop shop on The Furies, with the historian discussing at length the elaborate visual metaphors, foreshadowing, and symbolism that drive the film, such as a pivotal act of violence that’s telegraphed in an early scene. Also superb is a new interview with critic Imogen Sara Smith, who analyzes both The Furies and its place in Anthony Mann’s filmography as one of the three westerns he made in 1950 while transitioning out of noirs. (Smith also speaks at length about the writers that helped create The Furies, including novelist Niven Busch and screenwriter Charles Schnee.) In another interview from 2008, Mann’s daughter, Nina Mann, offers a perceptive critique of the filmmaker’s work with actors that’s complemented by touching biographical information. Rounding out this sturdy yet largely un-updated package is a rare yet skippable 1931 interview with Walter Huston, an archive interview with Mann from 1967, an essay by the singular Robin Wood, and the entirety of Niven Busch’s source novel.

Criterion’s Blu-ray presentation of this daring and seminal “Freudian western” is exceptional in its own right, though not markedly different from the 2008 DVD on the extras front.