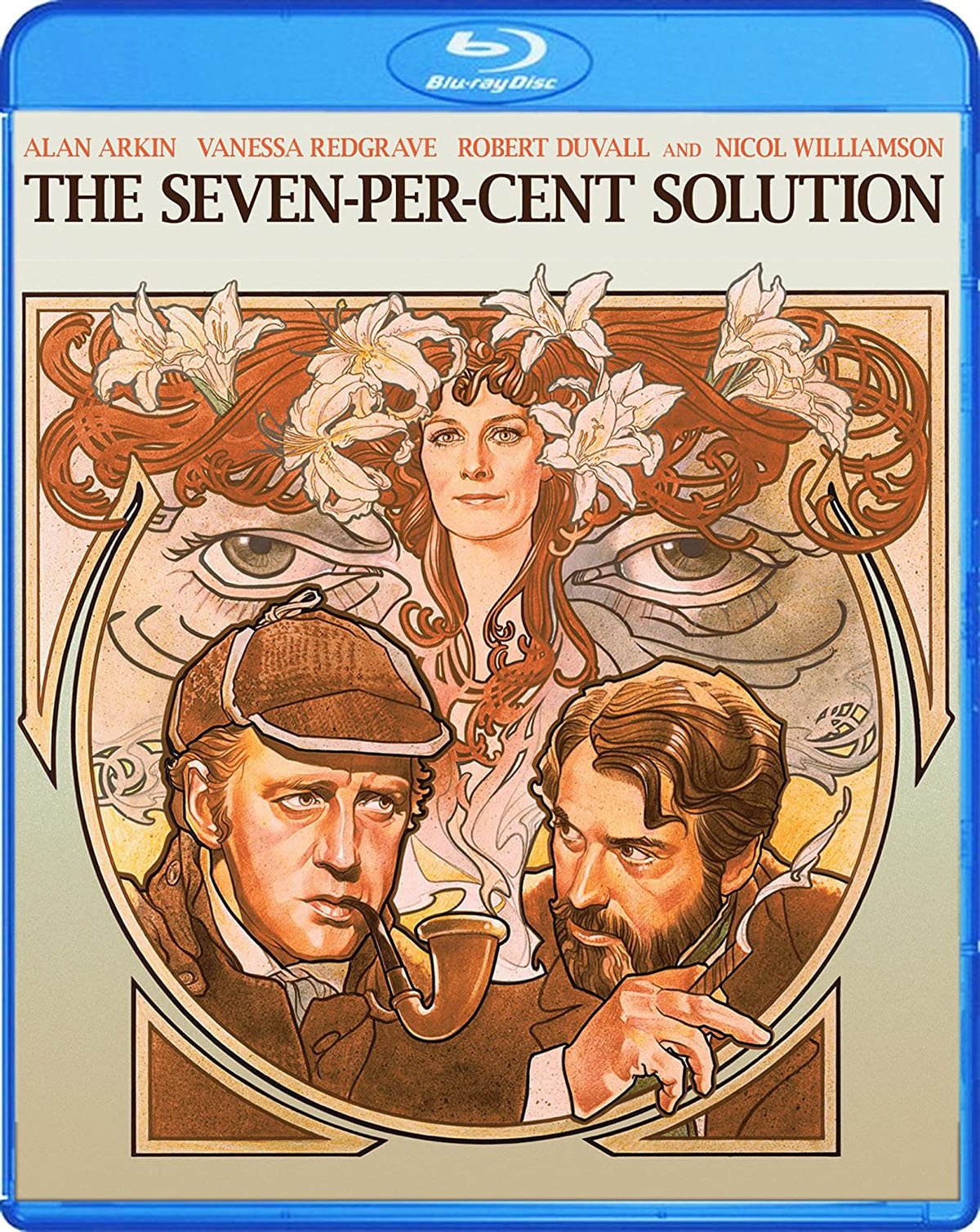 According to Guinness, Sherlock Holmes is the most-portrayed character on film, boasting a filmography that stretches from 1899 to Guy Ritchie’s recent block-blustery manhandling of the material. Given the era’s revisionist ethos, the 1970s was an especially rich period for reimagining the world’s most famous consulting detective. Aside from a slew of outright parodies and profanations (The Adventures of Sherlock Holmes’ Smarter Brother), there were a handful of films that intelligently and irreverently subverted the sleuth’s legacy: Billy Wilder’s The Private Life of Sherlock Holmes flirted with taboo by suggesting a homoerotic bond between Holmes and Dr. Watson, before pitting the pair against German spies and even the Loch Ness monster. They Might Be Giants featured George C. Scott as a delusional patient trying to persuade Manhattan psychiatrist Dr. Mildred Watson (Joanne Woodward) that he’s a modern-day Holmes. The Seven-Per-Cent Solution effectively splits the difference between these films by putting the “high” back into “high concept.” Adapting his own bestseller, screenwriter Nicholas Meyer has Dr. Watson (starchy Robert Duvall), fearful for the health and sanity of cocaine-dependent Holmes (twitchy Nicol Williamson), send Holmes on a wild goose chase that winds up in Vienna, where he can kick his habit with the assistance of Sigmund Freud (sturdy Alan Arkin).

The acting talent assembled here is one of the film’s great strengths, especially once it becomes apparent that the characters have been portrayed neatly against type. Lesser performers easily could have scotched the film’s oscillations in tone between drama and comedy, plunging the proceedings into irrecoverable bathos. Nicol Williamson seems to have specialized in roles that can best be described as eccentric (his Merlin in John Boorman’s Excalibur). Here he perfectly captures Holmes’s supercilious arrogance as well as the paroxysms of his drug-fueled paranoia. Duvall’s priggish Watson is about as far from bumbling Nigel Bruce as you can get. On the other hand, Arkin’s intense Freud eventually lets his hair down, indulging in some rather outlandish swashbuckling later in the film. Lastly, Laurence Olivier’s cringing Moriarty is anything but the “Napoleon of crime” Holmes’s febrile condition makes him out to be.

The Seven-Per-Cent Solution captures the pangs of Holmes’s drug addiction in ways that seem fresh and interesting, even if they occasionally recall the expressionist mindscape of John Huston’s little-seen Freud. Wide-angle lenses and other visual distortions, used to visualize the hallucinatory progression of Holmes’s detox, conjure up a dream state that fractures space and time; rooms become impossibly immense, and ceilings threaten to lower and crush him. (Incidentally, this sequence anticipates a similar scene in Danny Boyle’s Trainspotting.) What’s more, The Seven-Per-Cent Solution displays an unexpected formal similarity to Mario Bava’s Hatchet for the Honeymoon, as both films repeatedly flash back to the protagonist’s childhood. The imagery is even nearly identical: Each time the boy ascends a staircase a little farther, he comes that much closer to the sexual violence that traumatized him and thereby molded his mental development. The Seven-Per-Cent Solution is obviously more explicit in its association of this violence with the Freudian concept of the primal scene.

At least in its early stretches, the film comprises a psychoanalytic case history, intent on exploring Holmes’s inner turmoil, before devolving into an action-oriented pastiche, and what just might be one of his more irregular cases: the kidnapping of Lola Devereaux (Vanessa Redgrave) by bellicose Baron von Leinsdorf (Jeremy Kemp), who has already run afoul of Freud over his brazen anti-Semitism. The trail leads Holmes, Watson, and Freud to a bordello where the Madame (Regine) sings a Stephen Sondheim tune. Later, von Leinsdorf’s lackey, Lowenstein (Joel Gray), lures the trio into Vienna’s famous Spanish Riding School, where they’re trapped and nearly trampled underfoot by a brace of Lipizzaner stallions, prompting Freud to declaim the film’s funniest line: “These are the most intelligent horses in the world, and they have been trained to kill!”

You could easily argue that the protracted (not to mention underwhelming) train chase that fills most of the film’s second half exists only to provide requisite thrills. Then again, since most of the action consists of tearing down boxcars to further fuel the chase, the scene might be seen to supply slyly subversive commentary, deconstructing the action down to its barest bones in order to emphasize its ultimate disposability. Either way, the sequence ends perfunctorily, even abruptly, without even a coda that might resolve the action by showing the trio reunited with the kidnapped woman. Despite these structural caveats, The Seven-Per-Cent Solution is a rousing enough entertainment, even if the film’s most intriguing parts outweigh the rather ungainly whole.

Previously available only on a cropped full-frame DVD dating from the prehistoric days of the format (and, more recently, MOD from the Universal vault), The Seven-Per-Cent Solution makes its high-definition debut on Shout! Factory’s Blu-ray. All things considered, the 1080p/AVC-encoded transfer looks decent enough, though there are some minor issues with artifacts, and from time to time swathes of color fluctuate ever so slightly. Otherwise, clarity and detail are vastly improved, and grain levels are healthy. The lossless Master Audio stereo track does an excellent job opening up the film in the noisier, rowdier scenes, even though overall the dynamic range is relatively limited. Dialogue is always audible and easily discernible.

The sole extra is a reasonably interesting 20-minute interview with screenwriter Nicholas Meyer, who discusses the origins of the idea (his psychiatrist father looked for clues that might explain his patients’ unhappiness), the ways he tweaked the script in order to keep the story fresh for those who had read the book, and how he often argued in favor of paring back the script’s wordiness, which isn’t necessarily what you’d expect from a writer. When it came to casting, Meyer wanted Peter O’Toole, but director Herbert Ross had had trouble working with him on an earlier film, so they eventually settled on Williamson, who was better known at the time for his theatrical work. Meyer talks up the advantages of the other actors, and crushes on getting to work with Laurence Olivier.

The game’s afoot with The Seven-Per-Cent Solution, a more-than-game Sherlock Holmes pastiche, which makes its high-definition debut on Blu-ray sporting a solid transfer and accompanied by a spanking-new interview with writer Nicholas Meyer.