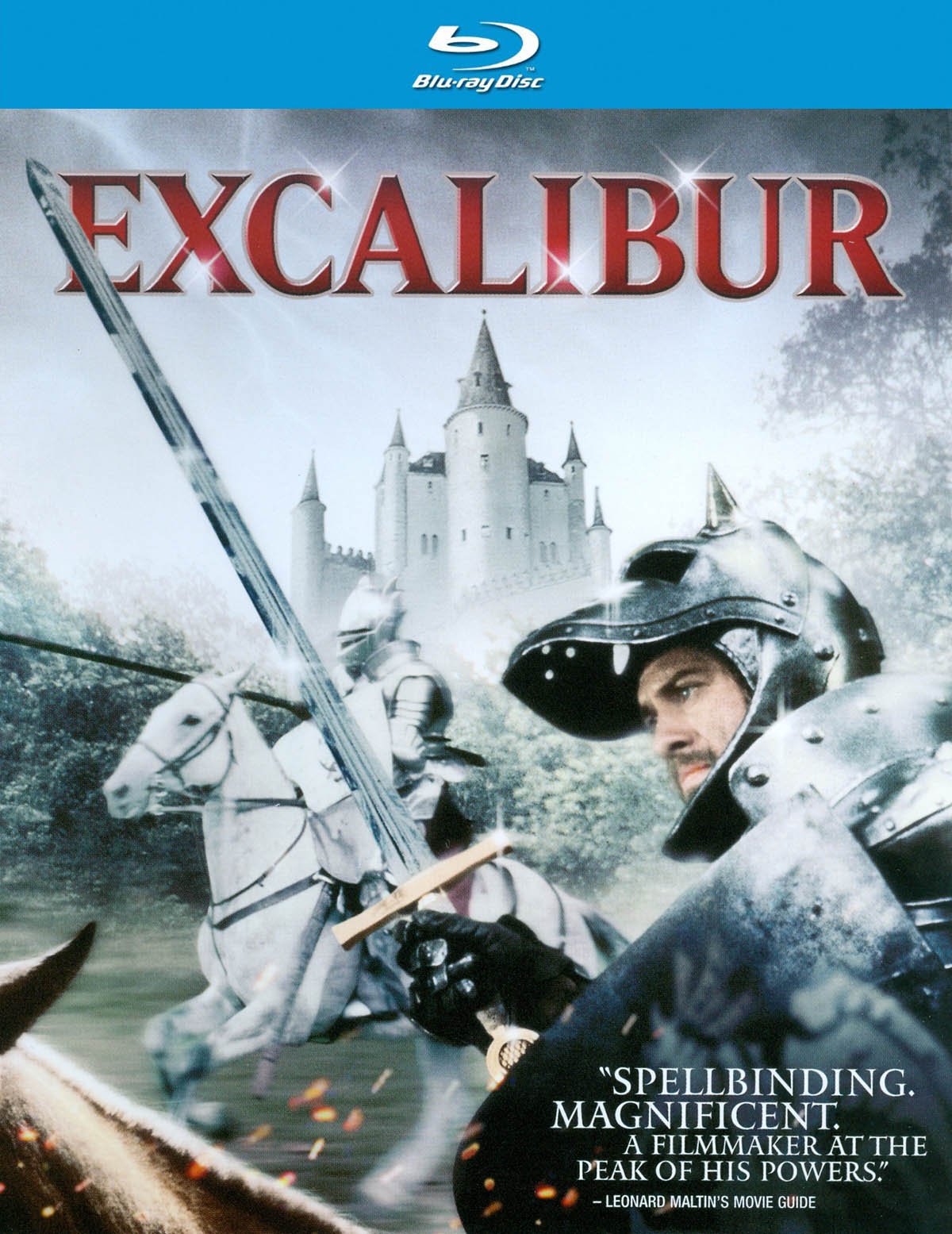 Like his masterful cinematic head-trip Zardoz, John Boorman’s Excalibur plays by its own set of rules. The epic medieval tale reimagines Sir Thomas Malory’s Le Morte d’Arthur as a glistening collection of ornate iconography, deconstructing familiar characters and references to create a fantastical hyper-realized version of medieval folklore. The rise of King Arthur (Nigel Terry), the meddling of Merlin the Magician (Nicol Wiliamson), and the dark influence of Morgana the Witch (Helen Mirren) are not just plot points, but powerful swoons of emotional transition churning a half-remembered version of history. The one constant in Boorman’s nightmarish renaissance fair is the sword Excalibur, a dual reflector of man’s endless potential and crippling ego. The weapon’s double-edged prowess becomes Excalibur’s thematic sledgehammer, a trigger for ideological and social shifts seeped in stylized melodrama.

While Zardoz anchors its lunacy to a breakneck forward momentum, Excalibur languishes in the moment of individual conflicts. From the very beginning, when King Uther (Gabriel Byrne) uses Merlin’s magical “dragon’s breath” to hide in plain sight and impregnate Queen Igrayne (Katrine Boorman), it’s clear Boorman is interested in mood over narrative coherence. Dialogue spouts in short but heavy bursts, coming across as almost instinctual instead of rationally thought out. When Arthur, the offspring of Uther and Igrayne, fulfills his destiny and pulls the sword from the stone, his quick ascent from bug-eyed squire to all-powerful king is logically ludicrous. Yet Boorman doesn’t include a shred of irony in the process, and we take each similar twist of fate at face value because of the tonal consistency.

From here, Excalibur progresses like a dream, with Arthur’s regal prominence, Lancelot (Nicholas Clay) and Guenevere’s (Cherie Lunghi) betrayal, and the quest for the Holy Grail organically unfolding like the passing of seasons. The different elements of nature become a recurring bridge between man’s strengths and weaknesses. When Uther beds Igrayne early in the film, a wall of fire surrounds their contorting bodies. Later, a naked Lancelot and Guenevere embrace in the moss-covered woods, the glint of green reflecting off the landscape almost consuming the lovers in wide angle. Tricked by Morgana during the film’s heavy-handed third act, Merlin becomes encased in ice, only to escape when he morphs into a dream figure that cannot be contained by nature. Finally, the proximity and pervasiveness of water throughout Excalibur cements Boorman’s fascination with the Earth. Throughput the film, the sword is thrust back into the hands of The Lady of the Lake in luminous slow motion close-ups, exuding the fluid purity Arthur consistently wishes to achieve.

Yet nature’s will (and God’s) cannot stop these iconic characters from rendering their fated betrayals, murders, and deceits, and Boorman’s textured façades show the results of these ill-fated acts. Splattered blood on silver armor, caked mud on faces, and suddenly severed limbs all play into the immediacy of the film’s blunt-force-trauma imagery. In this sense, the dialogue is almost superfluous to the story, and the power of individual moments comes from the visceral impact of color layering on to densely intricate mise-en-scène. It’s as if the grimiest and most lavish interpretations of the Dark Ages uncomfortably overlap, leaving the audience with only a surface of competing aesthetics.

Despite Excalibur’s fascinating visual approach (specifically the crazy representations of magic and sex), the film remains a bloated cinematic whale, wooden when it should be action-packed and tedious during supposedly emotional climaxes. It raises the question: What is Boorman after with such a hallucinatory and ultimately sluggish revision of King Arthur’s life and legend? My best guess is that Excalibur reveals the faulty human layers between classical characterizations (Arthur’s heroism, Merlin’s wisdom, Lancelot’s loyalty). Each of these characters is consistently conflicted over their duty to competing interests, none more so that to history’s memory of their impact. The tension between past time periods grows tighter as the film becomes more disjointed and aesthetically obtuse. In the end, Merlin’s fated words—“The future has taken root in the present”—echo across the moors as Arthur continues to dream about his complex place in the history books.

Presented for the first time in HD, Excalibur’s 1080p transfer illuminates the artificial color schemes and intricate costume design that dominates the frame. The prominence of green fluorescent lights, especially in the forest and lake sequences, is indicative of John Boorman’s outlandish, even hilariously overdone vision of history. The biggest differences between the film on DVD and Blu-ray can be seen during the exterior night sequences. When Arthur rides up a fiery hill to meet the Knights of the Roundtable, the entire mountainside is aglow in bright orange layers, and the level of detail is astounding. The DTS-HD MA sound design is rightfully clear, more affirmable for the booming musical score than the sometimes quiet and mutable dialogue.

The only supplement (aside from a measly theatrical trailer) is a leisurely paced but highly enjoyable audio commentary by John Boorman. He talks about the many production disasters that befell Excalibur, including the devastating opening week that saw the film’s initial battle sequence underexposed two straight times, leading the cameraman to have a nervous breakdown and quit. Boorman’s soft-spoken voice lovingly remembers Excalibur from a distance, as if it represented a long-forgotten dream he’s just now remembering.

On Blu-ray for the first time, John Boorman’s Excalibur is a staggering achievement of bloated artifice, dismantling the Arthur Legend one invigorating aesthetic swipe at a time.

Memory Review: Liam Neeson Gets a VOD-Grade Memento to Call His Own