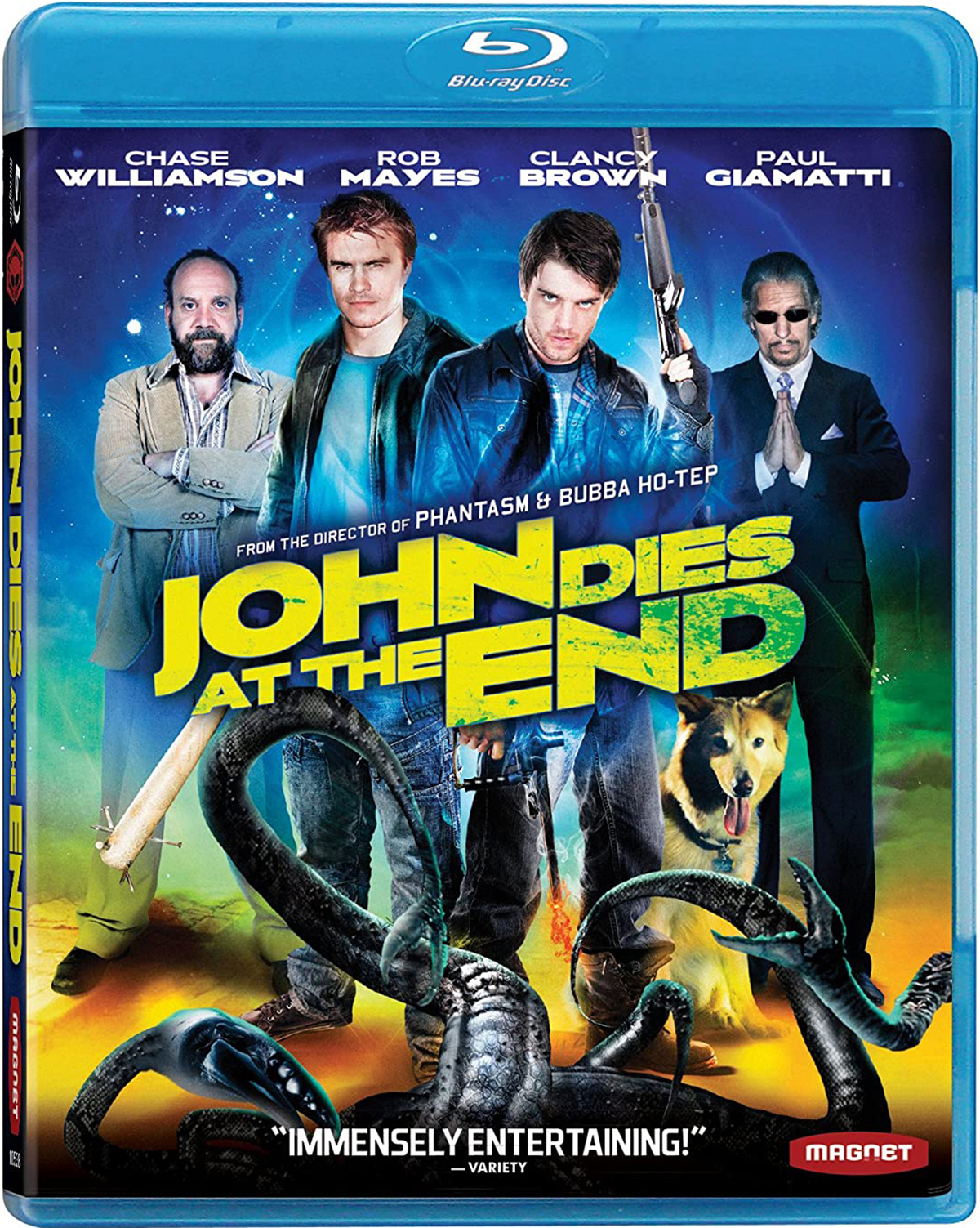 If nothing else, John Dies at the End certainly offers a buffet of grotesqueries for the horror-movie consumer. In the opening 10 minutes alone, we encounter a murderous thing composed of butchered meats, a reanimated head-swapping skinhead, and a fetching siren who collapses into a bundle of hissing, writhing snakes. Later on, there are zombies, giant slugs (possibly even giant zombie slugs), and, most memorably, scores of bugs that owe a great debt to the design of the metaphorical beasties that haunted Peter Weller in Naked Lunch. Presiding over the various creepy-crawlies, I think, is a huge computer-generated inter-dimensional monster overlord that would be unthinkable without H.P. Lovecraft’s Cthulhu mythology and the great many films and books it subsequently inspired. And, most importantly, there’s a super drug called Soy Sauce that affords two slackers the ability to interact with all of this derivative nonsense.

To be fair, writer-director Don Coscarelli’s film is primarily a comedy in which the humor is intended to spring, with a knowing wink, from the clichéd nature of the horrors that David (Chase Williamson) and the potentially doomed John (Rob Mayes) encounter. Like Ghostbusters, Shaun of the Dead, and many others, John Dies at the End features heroes who appear to have been thrust into the deepest trash heap of their nightmares, most of which are derived from movies they watched in the middle of the night, probably over several pizzas and a bag of weed.

The film is watchable in an amiably pointless sort of way, but Coscarelli’s never able to work up a compelling momentum. John Dies at the End itself appears to be stranded between two dimensions. Portions of the film are clearly meant to replicate the frazzled, disorienting highs associated with heavy recreational drug use (Soy Sauce would appear to induce states that simultaneously resemble the effects of heroin and acid), which logically justifies the film’s many hallucinatory flights of fancy. At other times, though, particularly in the dour and labored third act, Coscarelli weighs the imagery down with a conventional story of two boneheads saving the day.

Despite his reputation in the horror community, Coscarelli has never been much of a filmmaker. His movies, which most famously include Phantasm and Bubba Ho-Tep, have a becoming modesty as well as odd moments of irrational poetry, but it’s hard to watch them without spotting the squandered promise. John Dies at the End is a similar case of wasted potential that most disappointingly neglects a potentially resonant subtext of a friendship splintered by addiction. It also takes a special kind of perversity to devote so much time to the quickly grating leads while an excellent and game supporting cast, which includes Paul Giamatti, Clancy Brown, Doug Jones, and Daniel Roebuck, mostly rests at the sidelines. The film is ultimately an irritatingly self-conscious wannabe cult object that clearly wants to elicit delighted “What the fuck?” reactions, though “Why the fuck?” is a better fit.

John Dies at the End is clearly a low-budget production, but this transfer is impressively detailed, to the point of occasionally inadvertently highlighting the artificiality of certain effects. Whites are sometimes glaring, and there’s some clarity issues with certain background shots, but the foreground is often quite lush, particularly in the sequences set in the Chinese restaurant with Paul Giamatti. The 5.1 mix is pretty spotless, balancing subtle details with the score and more bombastic effects with pleasing grace.

The supplemental materials have been produced with an obvious eye toward pleasing the Fangoria crowd, and they mostly succeed. The audio commentary with writer-director Don Coscarelli, producer Brad Baruh, and actors Chase Williamson and Rob Mayes is the most pleasing extra, particularly for Coscarelli’s participation. The writer-director is charismatic and congenial, and guides the other participants through various production anecdotes with a quiet, humble authority. Paul Giamatti’s interview with Fangoria allows the actor to appealingly get his horror geek on, while “Creature Corps: The Effects of Soy Sauce” provides a succinct and informative tour of where the film’s various monsters were created. The other extras are forgettable EPK fodder.

Fans of filmmaker Don Coscarelli should be reasonably pleased with John Dies at the End, but your time would be better spent with virtually any Stuart Gordon film.