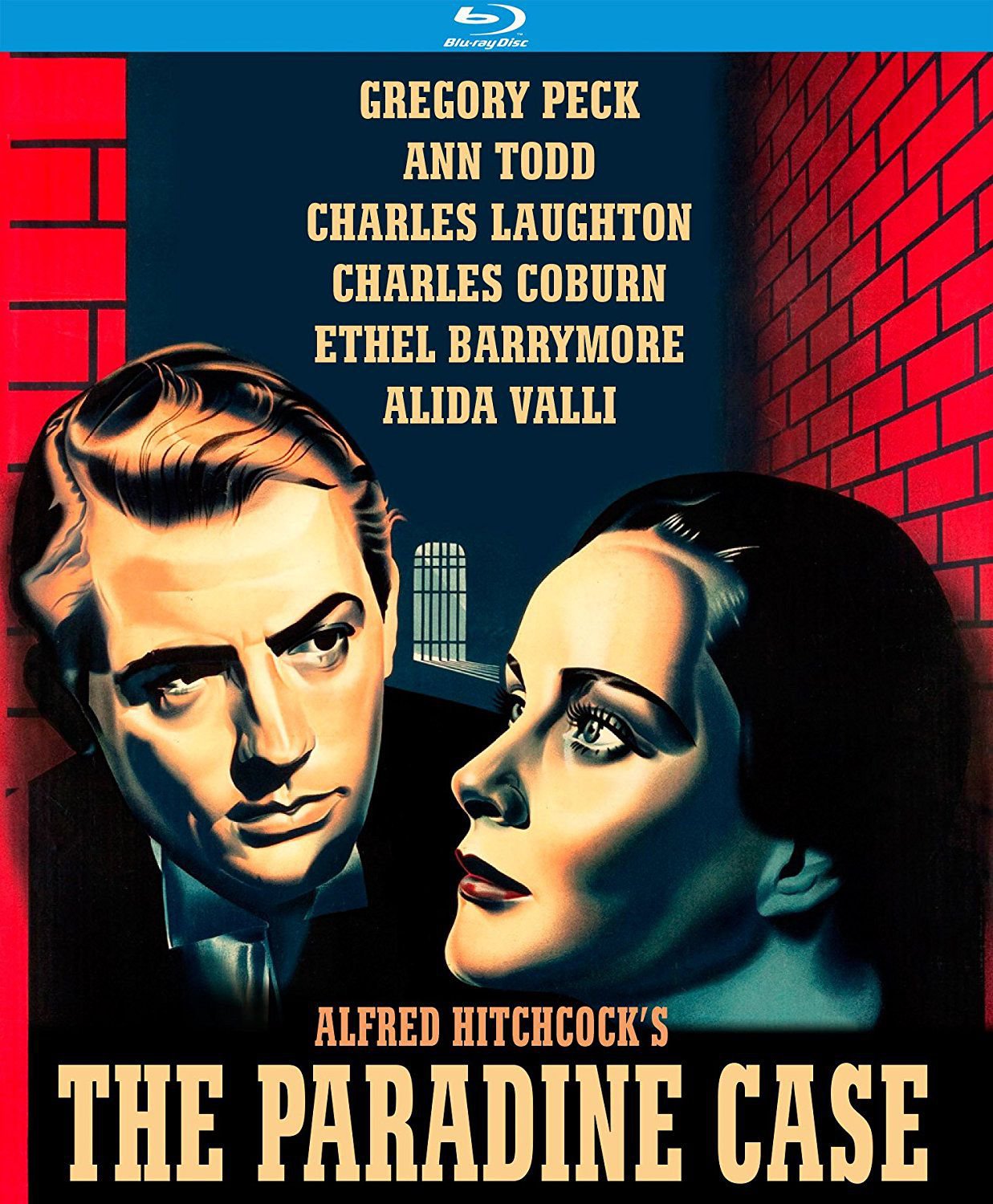 Alfred Hitchcock’s The Paradine Case is an eccentric courtroom procedural that’s infused with the director’s perversity and enlivened by his profound imagination. These qualities are on display in the film’s opening, in which we see people navigating the streets of London, walking across the screen from right to left. Hitchcock then fades into an interior shot of a mansion, matching the movement of the pedestrians outside with the stride of a butler who’s also walking from right to left, so as to notify Mrs. Maddalena Anna Paradine (Alida Valli) that dinner will be ready soon. In a drawing room, a sophisticated series of pans and dollies switches the audience’s source of identification, untethering us from the butler and attaching us to Paradine.

When the butler enters the room, the camera swoops around him into a close-up of Paradine’s face as she plays the piano. The butler leaves, and Hitchcock lingers on this gorgeous woman with an erotic reverie that’s familiar to his work. When the butler re-enters the room to tell Paradine that investigators have arrived to speak with her, the camera pivots on her face, changing the orienting axis of the setting. The entrance to the drawing room is now on our left, rather than right, and the function of the setting has changed. We were outsiders when we entered this realm with the butler. Now we’re insiders as the butler ushers forth interlopers, and we’re primed to regard them suspiciously from Paradine’s point of view.

It’s easy for a cinephile or film critic to recognize the accomplished audacity of, say, the shower scene from Psycho. But The Paradine Case revels in the quiet brilliance that defines Hitchcock’s cinema: its geometrically fluid rendering of power. The film’s first act might’ve been regarded as exposition by a conventional director and tossed off in a series of over-the-shoulder shots that would live or die by the actors’ performances. For Hitchcock, such scenes are at the core of his very subject, as The Paradine Case is a study of neurosis, in which a murder trial comes to stand as a pretense for influential men and women to argue their statuses vis-à-vis each other.

Hitchcock utilizes faces as pivot points throughout The Paradine Case, most famously when a witness’s entrance into a courtroom is staged entirely from behind a close-up of Paradine’s head. This witness will prove to have a great deal of meaning to Paradine, which is clouded in a fog of class, sexual instinct, and romantic longing. The film is concerned with how class dwarfs our sexuality, conditioning men to resent an inability to procure women to whom they feel their station entitles them. This stifled hunger runs throughout Hitchcock’s filmography as his master theme: In his comedies and light thrillers, sex and its corresponding acceptance are freely experienced by good-looking and charismatic people; in his existential thrillers, these are forbidden fruits to the emasculated male protagonists. In The Paradine Case, men and women talk almost entirely of sex via legal euphemisms—conversations which Hitchcock frames in tableaux that evoke the ebb and flow of one-upmanship, dramatizing a series of checks and checkmates as women grapple for the agency that men cruelly deny them.

A key moment in The Paradine Case plumbs Hitchcock’s infatuation with sexual resentment. Judge Lord Thomas Horfield (Charles Laughton), who clearly abuses his wife, Lady Sophie (Ethel Barrymore), has the noted defense counselor, Anthony Keane (Gregory Peck), and the latter’s wife, Gay (Ann Todd), over for dinner to discuss the Paradine murder case, in which Keane is defending Mrs. Paradine. Horfield notices Gay’s bare shoulder, which Hitchcock pushes in on with a zoom that’s as intrusive as Horfield’s gaze. Horfield sits next to Gay while the other partygoers are distracted and directs her hand toward his inner knee, while talking of how Keane must be preoccupied with his legal career. Laughton and Hitchcock play the scene for debauched and stingingly humiliating comedy, anticipating the parallel obsession that Keane will develop for Paradine, who may be in love with her valet, LaTour (Louis Jourdan). This insults the successful Keane, influencing his defense of Paradine, which becomes an embarrassing surrogate persecution of LaTour.

Given the accounts of Hitchcock’s harassment of several of his actresses, it’s impossible not to regard these nesting resentments as autobiographical. This is particularly true when one listens to the filmmaker’s interviews with François Truffaut and Peter Bogdanovich (portions of which are included on this disc), in which he elaborates on the degradation of Keane, who, in Hitchcock’s mind, falls for a nymphomaniac who’d go to bed with someone as lowly in station as LaTour. One of Hitchcock’s great regrets about The Paradine Case was Jourdan’s attractiveness, as the filmmaker envisioned LaTour as a manure-smelling stable-hand who embodied Paradine’s true lack of discernment, which magnified the unjustness of her rejection of Keane. In these interviews, Hitchcock manages to be commandingly condescending as a human being and absolutely correct as an artist; image-sensitive casting would’ve almost certainly heightened the sexual masochism driving the narrative. The fascination of these interviews resides in how much Hitchcock seems to inadvertently reveal of himself, such as the classism that celebrities now make a pretense of obscuring. For instance, Hitchcock never fails to say “manure” without the deepest inflection of contempt.

Hitchcock defined the iconography of many female stars, heightening their fascination to the populace through the voyeuristic scrim of his poetry. Yet, no matter what his own power, Hitchcock probably never felt among these women, as he could never be their male equivalent in physical fabulousness, like Grant or Jourdan. And unlike most conventionally unattractive men, Hitchcock was close enough to this rarefied paradise to know precisely what he was missing. It’s this sense of a gifted man feeling robbed of a key element of life (which other men can take for granted) that drives Hitchcock’s art, even a collaboration with David O. Selznick such as The Paradine Case.

It’s this bitterness, coupled with technical virtuosity, that yielded one of the most ironically and ambiguously transcendent of artistic sensibilities. Hitchcock’s appearance of profound self-hatred, weaponized into droll elitism for public appearances, flowers in his films into an agonized and empathetic portrait of sexuality that’s painted from the vantage point of an outsider’s bench. For all the objectification of women that abounds in Hitchcock’s films, his female characters have a life force that shames the work of more obviously humanist filmmakers. Hitchcock’s films aren’t about sex. They are sex, a paradoxically democratized and exclusive sex that can be consumed by any viewer—from a distance. At its best, The Paradine Case plumbs this sickness with playful and beautiful self-awareness, as it’s the work of a master who infuses even formula with the mark of his will, soul and genius.

A short featurette on this restoration calls attention to the lightening of the image, which was murky in past editions. But this is still a significantly flawed image, with soft, glaring whites and distracting clusters of grain, particularly in the backgrounds. The good news is that foregrounds are clear and detailed, the facial close-ups are mostly sharp and attractive, and the blacks are rich and stable, though this is far from a definitive presentation. The soundtrack brings a newfound clarity to the overlapping dialogue, energizing this variable war of words, and Franz Waxman’s score has pep and depth. Which is to say that we have a mixed bag then: Fans of The Paradine Case with generous wallets are advised to buy this Blu-ray for the film and the terrific audio commentary, but keep expectations in check.

The excerpts of Alfred Hitchcock’s respective interviews with François Truffaut and Peter Bogdanovich are superb, as fans of these directors will already know. Hitchcock distinguishes objective and subjectively motivated edits and riffs on the performances of his actors and on perceived miscasting he attributes to producer David O. Selznick. There’s also a personal obsessiveness on display in Hitchcock’s answers, as he willingly flirts with revealing the dark sides of his persona and art. The only flaw of these supplements is that they aren’t collectively longer, running a teasingly short 25 minutes. Picking up that slack is an excellent audio commentary by film historians Stephen Rebello and Bill Krohn, which parses cuts, mandated by Selznick, that were at odds with the intricate in-camera editing of Hitchcock’s own compositions (an approach to staging that limited Selznick’s control over the film in post-production). The unnecessarily ample screen presence of Ann Todd is attributed to a lack of confidence in Alida Valli and to the resemblance the plight of Todd’s character may have born to that of Selznick’s own wife, as he was in the process of leaving her for Jennifer Jones. The commentary elegantly covers a variety of other topics as well, parsing this underrated film’s meanings and rendering it ripe for reevaluation. Rounding out this sturdy package is a note on the film’s restoration, a short interview with Gregory Peck’s children, Cecilia and Carey, a 1949 radio play of The Paradine Case with Joseph Cotton and Valli, the original theatrical trailer, and an isolated music and effects track.

This all-star courtroom thriller is also an underrated study of a master artist’s social demons, embodying the very essence of the auteur theory.