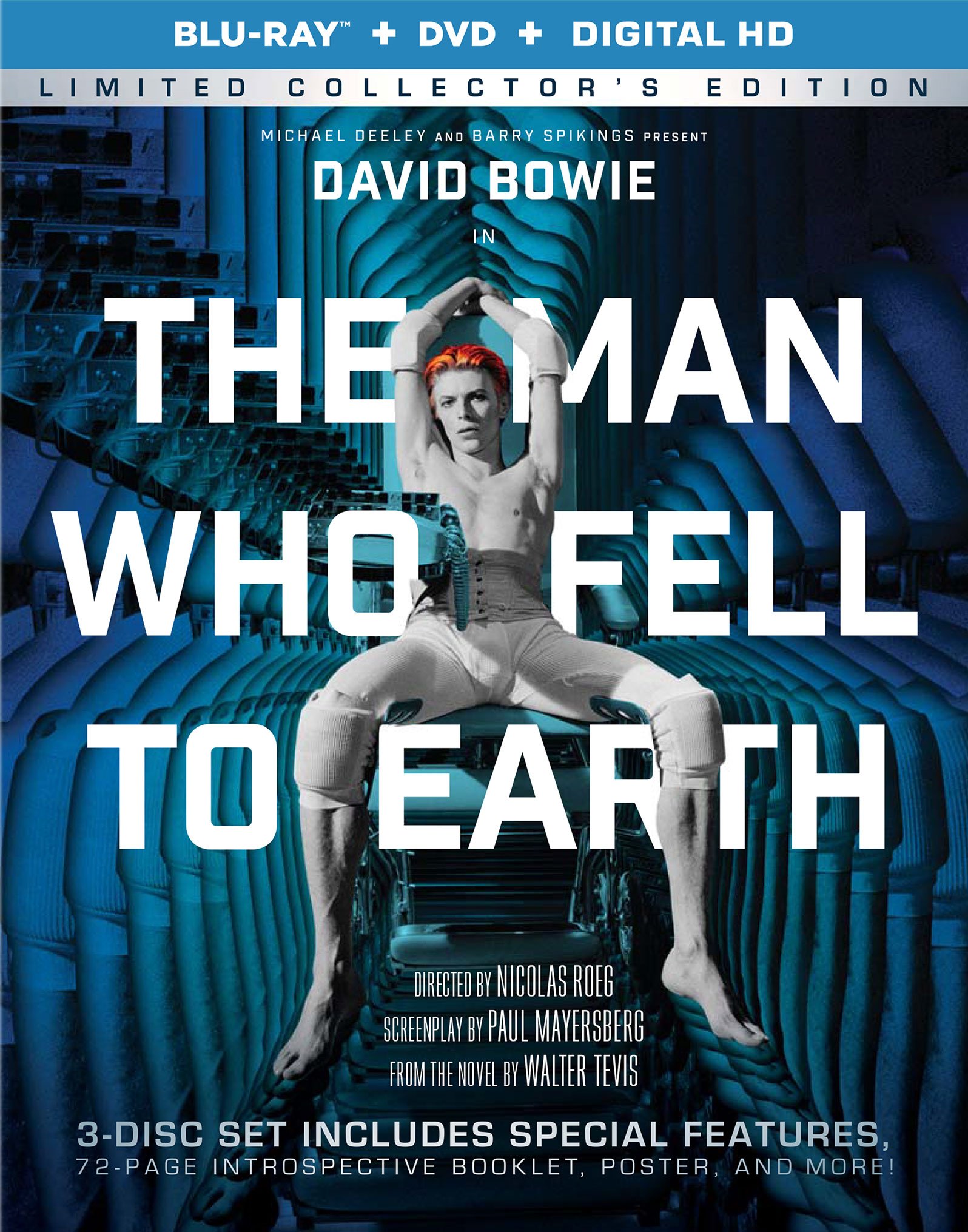 Adapted from the novel by Walter Tevis (who also wrote The Hustler), Nicolas Roeg’s The Man Who Fell to Earth finds the alien in alienation. The novel and film are melancholy studies in social estrangement and the depredations of alcoholism, loosely attired in the trappings of science fiction, that recount the disastrous attempts at earthly assimilation by an ambitious visitor from another planet. If anything, Roeg and screenwriter Paul Mayersberg enlarge upon the tragedy of ersatz human and eventual billionaire Thomas Jerome Newton (David Bowie, perfectly cast as the ungainly space oddity), playing up the desperate plight of his extraterrestrial family, slowly dying on a planet devoid of water.

The Man Who Fell to Earth is exceptionally allusive, replete with references to painting, literature, and cinema. Like its source material, the film invokes the myth of Icarus in ways subtle and overt—from its very title to a prominently displayed coffee-table book that pairs W.H. Auden’s poem “Museé des Beaux Art” and Breughel’s Landscape with the Fall of Icarus. Roeg weaves snippets of imagery and dialogue (first glimpsed on Newton’s proliferating bank of TV sets) taken from Billy Wilder’s Love in the Afternoon and Carol Reed’s The Third Man into scenes where they provide thematic, albeit ironic, counterpoint, knowingly foreshadowing acts of infidelity and betrayal. The hymn Newton fumblingly attempts to sing along with Mary-Lou (Candy Clark) is the anthem “Jerusalem,” set to William Blake’s short poem of the same name, a prophetic vision of Christ’s paradisiacal return contrasted with the “dark Satanic mills” of the Industrial Revolution—another sardonic juxtaposition of the sort Roeg seems to savor throughout the film.

More than mere affectation, this dense intertextuality stands as a deliberate strategy on the part of Roeg and editor Graeme Clifford to implement Eisenstein’s theory of intellectual montage. Roeg had the opportunity to observe techniques of nonlinear editing early in his career while working as cinematographer on Richard Lester’s Petulia. In his own films, Roeg employs a similar sort of jagged, elliptical style of editing both to tinker with straight-arrow notions of narrative time—witness the scene where Newton has a vision of a pioneer family travelling westward, and the pioneers also notice him passing in his limo—as well as to foment the dialectical collision of ideas.

Eisenstein likened his concept of montage to the Kabuki theater and its emphasis on expressively isolated body parts. Not only is Roeg’s film adorned with various Japanese decorative motifs, but it also embodies what Paul Mayersberg refers to, in one of the disc’s supplements, as “the distinctly Japanese tension between serenity and violence.” That tension is nowhere more evident than in a scene that crosscuts between a very Kabuki-style performance, complete with parrying samurai swords, and Nathan Bryce (Rip Torn) cavorting with one of his students. In previous films, Roeg had a habit of dealing unabashedly with body parts; fragmented moments of flagrant eroticism are a common denominator from Performance to Don’t Look Now.

The Man Who Fell to Earth ultimately takes a rather jaded view of sexuality as just another unit of exchange, tantamount to the financial transactions Newton conducts with the assistance of patent attorney Oliver Farnsworth (Buck Henry). As the film progresses, the bottom falls out of this common coinage and the sex acts grow more animalistic and aggressive, culminating in a late exchange between Newton and Mary-Lou, his erstwhile lover. Initially, they only connect over booze and firearms, the revolver Newton uses to stir his drink eventually stimulating more heated discussion. Newton confesses that he has visions of bodies when Mary-Lou asks him, “What happens to you when you drink?” Newton’s double entendre fuses sex and death, since it just as easily applies to a naked body as a corpse. His remark refers back both to the spectacle of his perishing family and the scene in which he revealed his naked alien body to Mary-Lou, only to be reviled and rejected.

Condemned ultimately to be no more than human by the caprice of bureaucratic neglect, Newton squanders his time and money in alcoholic dissipation, which is where Bryce finds him in the film’s haunting final scene. Bryce holds out hope for one last chance, for contact of some kind, for relief from the stranglehold of growing old and resigned. Newton’s halfhearted reassurance is something less than convincing. And so The Man Who Fell to Earth ends on an elegiac note with Newton’s rueful admission: “We’d have probably treated you the same if you’d come over to our place.”

On Lionsgate’s 4K transfer, The Man Who Fell to Earth’s brightness levels appear boosted, and the color timing now skews to the yellow. Certain peculiarities in the disc’s encoding leave bitrates fluctuating wildly, yielding considerable variability in sharpness and fidelity to fine details. The Master Audio stereo mix does well by the film’s dense sound design and an unconventional score (credited to “musical director” John Phillips, former leader of The Mamas & the Papas) that mingles vintage pop standards, original rock tunes, avant-garde pieces by Stomu Yamashta, and the ethereal keening of whale song. Although this Blu-ray provides a serviceable enough A/V presentation, it’s probably not enough of an uptick in quality to necessitate owners of the now OOP Criterion disc to double-dip—unless, of course, they’re coveting this release’s entirely different roster of bonus materials and other goodies.

The distributor includes nearly three hours of cast and crew interviews, many of which have been newly commissioned, with the rest carried over from Optimum’s 2011 Region B Blu-ray release. (Oddly enough, they’re all presented in SD.) Highlights include screenwriter Paul Mayersberg delving into the nuts and bolts of the adaptation process, and divulging some interesting early casting choices; Candy Clark disclosing her other uncredited appearances in the film; and DP Tony Raymond relating a bizarre anecdote about donating his own blood to the scene where Newton undergoes medical experimentation, because David Bowie refused to do it using pig’s blood. Bowie’s 1977 appearance on French TV suffers from the interviewer’s bilingual juggling act, which constantly steps all over Bowie’s responses.

“The Lost Soundtracks” offers a fascinating glimpse into the film’s multifaceted soundscape. Arranger Paul Buckmaster discusses working with Bowie on some early demos for a soundtrack that was eventually scrapped (though one piece found its way onto Bowie’s 1977 album Low). Biographer Chris Campion walks us through John Phillips’s contributions to the soundtrack used in the film. Lastly, producer Michael Deeley reveals the reason a soundtrack album wasn’t released at the time. One eventually did come out last year to coincide with the film’s 40th anniversary; in fact, Lionsgate’s UK Blu-ray release included a soundtrack CD, but that’s nowhere to be found in this set. On the plus side, there’s a generous selection of other swag tucked into the slipcase: a lavishly illustrated 70-page booklet with essays from David Jenkins and Chris Campion, four art cards, a reproduction of the original press book, and a foldout A4 film poster.

The Man Who Fell to Earth receives a serviceable 4K transfer and a bounty of bonus materials from Lionsgate Home Entertainment.

Review: Derek Cianfrance’s The Light Between Oceans on Touchstone Blu-ray