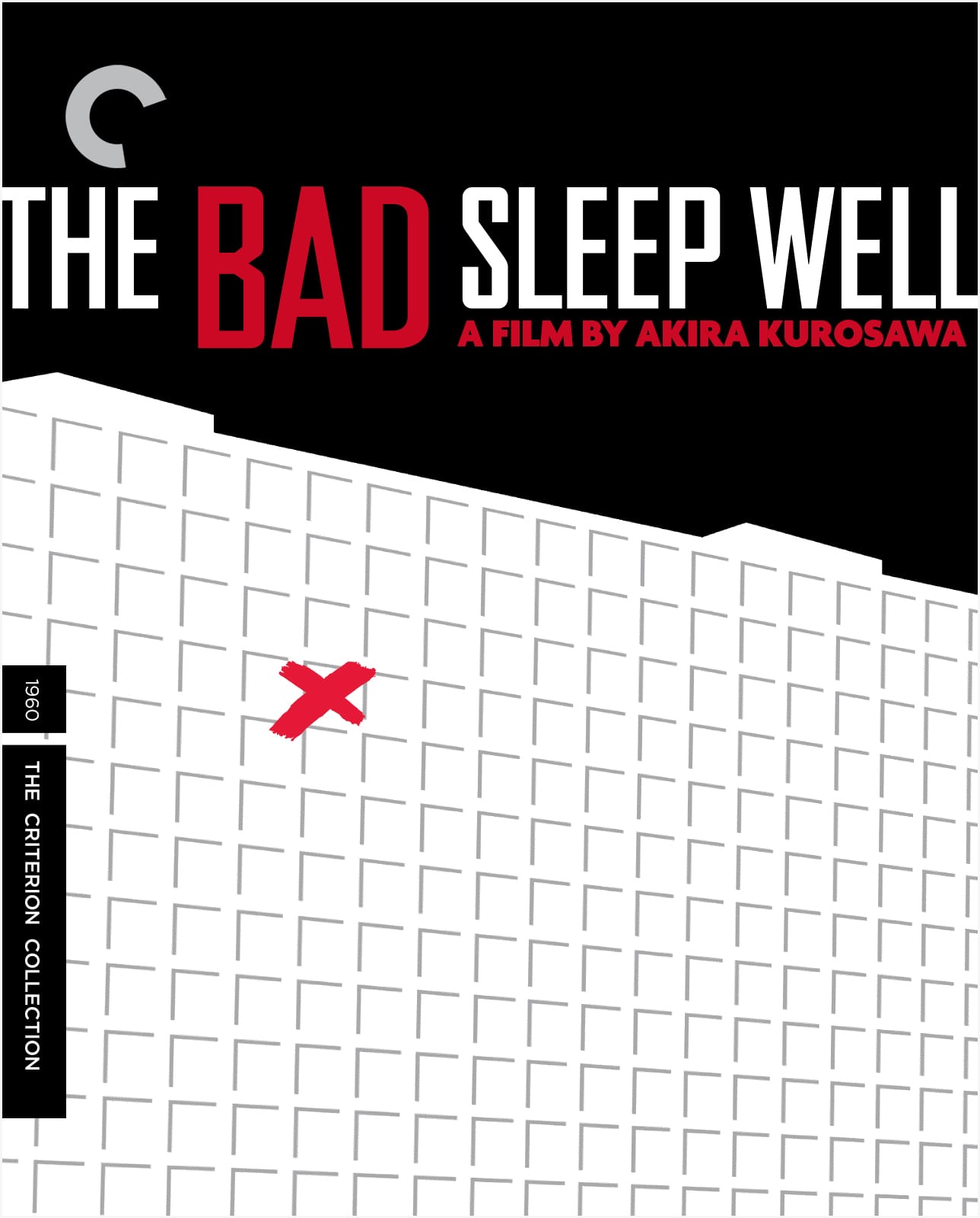 If 1952’s Ikiru projects a propitious belief in the individual’s ability to affect societal change—and to achieve a measure of emotional and spiritual regeneration in the process—then 1960’s The Bad Sleep Well slices such fanciful notions to ribbons with a swiftness and brutality that would make Yojimbo gasp. Grim and astringent, Akira Kurosawa’s searing condemnation of post-WWII corporate corruption takes direct aim at his prior work’s humanistic hopefulness, burying any trace of optimism under a landslide of gutless cravenness, soul-crushing vengeance, and fatal futility. A suit-and-tie noir defined by its disgust for those who line their own pockets at the expense of the greater good, and convinced of the ineffectuality of modern man’s struggle against the powers-that-be, The Bad Sleep Well—as with the subsequent, similar High and Low—is an anxious beast, a sweaty, jittery, stressed-out serving of social commentary with few uplifting bones in its body. And yet even more than the funereal pall of desolation hovering over its boardroom and back-alley action, the director’s touches of mordant wit are what turn his 1960 drama into a gloriously black-hearted nightmare of dashed dreams and scarred psyches, shading his expressive Tohoscope frame with a smirking cynicism that seems to mock even the thought of altruistic intentions and happy endings.

A freestyle homage to Hamlet that does away with the costumed faithfulness of Kurosawa’s other Shakespeare adaptations (Throne of Blood, Ran), instead simply picking and choosing its Bard references whenever it sees fit, The Bad Sleep Well begins with the lavish wedding banquet of Nishi (Toshirô Mifune), an executive at Public Corporation for Land Development, and Yoshiko (Kyōko Kagawa), the crippled daughter of Public Corp.’s vice president Iwabuchi (Masatyuki Mori). As a chorus of on-looking reporters deliver expository background on the ceremony’s key figures—and, specifically, the death (murder?) of a Public Corp. employee named Furuya five years earlier that seems to have been designed to cover up a scandal involving Iwabuchi and his henchmen Moriyama (Takashi Shimura) and Shirai (Kō Nishimura)—Kurosawa mixes together fretful close-ups, sharp, unsettling cuts (oh, those popping champagne bottles!), and bifurcated compositions that speak to the sharp divisions and oppressive tension of the supposedly celebratory event. In the midst of the feast, the police arrive to arrest an accountant named Wada (Kamatari Fujiwara), a sketchy construction outfit’s president gives a toast that sounds like defiant court testimony, and a mysterious wedding cake in the shape of Public Corp. headquarters arrives with a red rose in the window from which Furuya leapt. Clearly, something’s rotten in the capitalist mecca of Tokyo.

As rumored, Nishi’s betrothal is driven by ulterior motives, yet rather than an attempted grasp for power, his purpose is really revenge against Iwabuchi and company. The secret illegitimate son of Furuya, Nishi is an undercover agent of destruction in Iwabuchi’s inner sanctum, sleeping under the old man’s roof (but not in the same bed as Yoshiko) and working as his right-hand man. Lacking the introspection of the Prince of Denmark but nonetheless defined by his hate and guilt, Nishi stages Wada’s death in order to use him as a haunting specter against his enemies, and later frames Shirai as a means of spreading doubt among the powerful elite, and it’s during this middle section of the film that Kurosawa barrels full-throttle into noir territory, drenching his film in cobalt shadows and bleak irony. Images of Wada’s distraught eyes peering over a car dashboard at his own funeral (the sound of cold, treacherous conversation playing on a tape recorder), and later of Shirai lying prostrate under a gunman’s weapon on a barely lit street, contribute to Kurosawa’s aggressive mood of frantic desperation, and the mocking whistling of Nishi—as well as his occasional delight in the torment of the campily hysterical Shirai—exacerbates a gallows humor-inflected outlook on the world as a place where wrongs can only be combated with further wrongs.

A stoic force of retribution who comes to learn the true price of payback, Nishi is embodied by the magisterial Mifune with a granite sternness only softened by the character’s eventual unintended affection for Yoshiko and his realization that endemic corruption is a Goliath not easily felled by one clever man. Finally relegated to using a bombed-out munitions factory as a prison and torture chamber, Nishi seems trapped not in post-war Japan but a post-apocalyptic wasteland where moral disorientation and injustice reign, and the director’s expressionistic utilization of steel girders and rubble-strewn rooms lit only by small holes of sunlight strikingly reflects his protagonist’s corrosively tormented soul. Nishi, incapable of fully lowering himself to the level of his adversaries and, thus, unable to fulfill his quest, is eventually felled by a rampaging locomotive (a canny appropriation of western symbolism of unstoppable “progress”), his death unceremoniously kept off-screen in a gesture that not only conveys the shadowy invincibility of corporate and political might but also the wholesale negation of nobility, honor, and heroism in an executive business environment typified less by Bushido, gunslinger, or even criminal codes of ethics than simply by an insatiable, selfish greed. As The Bad Sleep Well’s unceremonious denouement heartbreakingly conveys, Nishi’s despondence regarding big business’ indomitable, malevolent potency is, ultimately, Kurosawa’s as well.

Disappointingly, no commentary track is provided for this, Kurosawa’s most underappreciated gem (perhaps Criterion’s regular Japanese cinema commentator Donald Ritchie was on vacation?). Partially making up for this absence is a very good 33-minute documentary on the making of The Bad Sleep Well culled from Toho Masterworks’s Akira Kurosawa: It Is Wonderful To Create series, featuring anecdote-heavy interviews with many of the film’s principal cast and crew as well as a decent amount of archival photos and production footage. For more critical insight, the disc’s accompanying booklet offers great essays by critic Chuck Stephens and director Michael Almereyda. A theatrical trailer is also included.

A sterling Shakespearean noir, Kurosawa’s critique of unchecked corporate power functions as an uncharacteristically despondent counterpoint to his trademark humanism.

Nick Schager is the entertainment critic for The Daily Beast. His work has also appeared in Variety, Esquire, The Village Voice, and other publications.

DVD Review: Daniel Gordon’s A State of Mind on Kino on Video