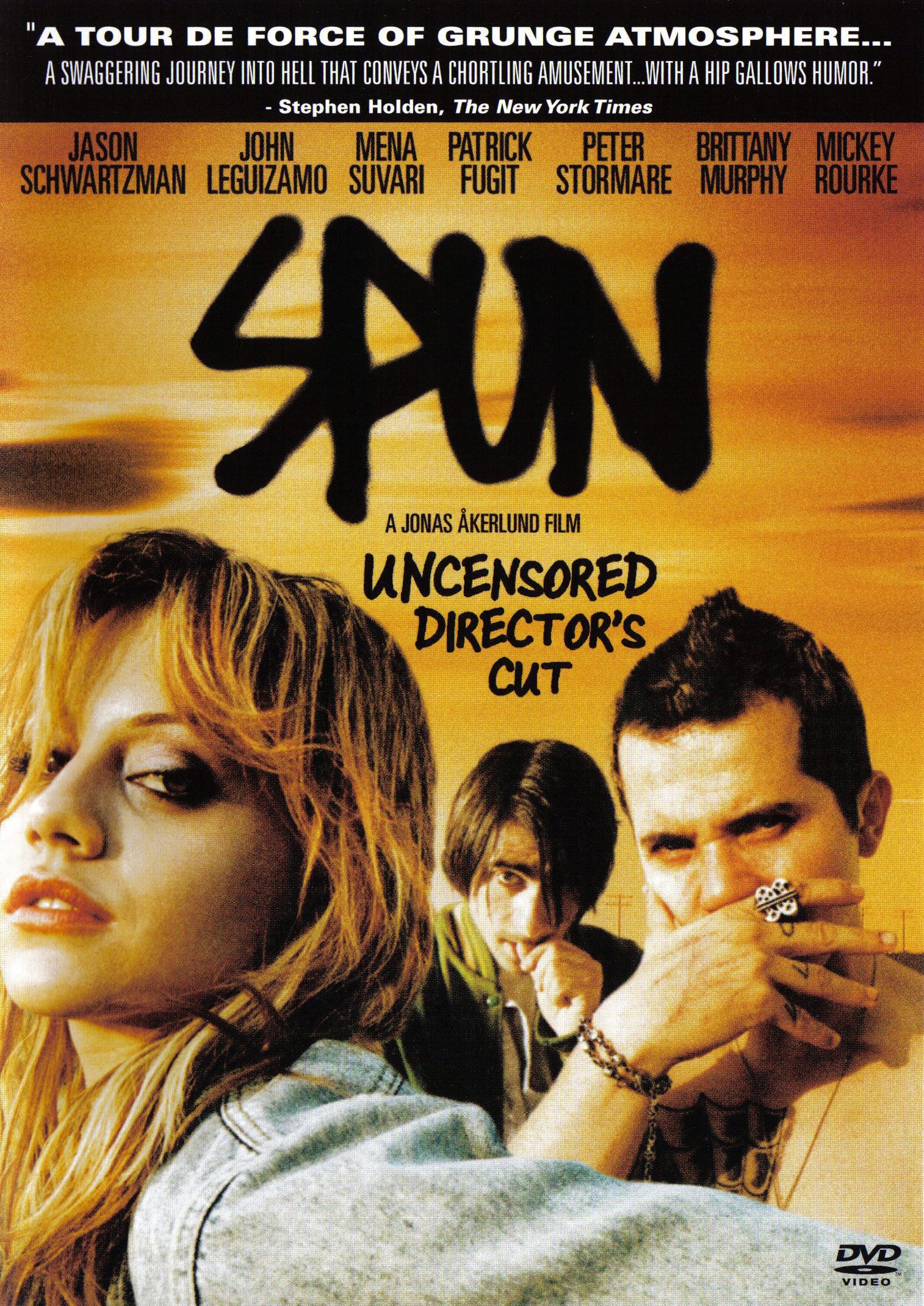 The debut feature from music video director Jonas Åkerlund, Spun focuses on the three-day odyssey of Ross (Jason Schwartzman), a crystal meth user who, after leaving his naked stripper girlfriend handcuffed to his bed, embarks on a series of adventures with drug dealers sporting cartoonish names like Spider Mike (John Leguizamo) and The Cook (Mickey Rourke), a couple of trashy drugged-out bimbos (Mena Suvari, Brittany Murphy), and lots of rock stars making intrusive cameos as regular Joes (Rob Halford, Debbie Harry, Billy Corgan). Åkerlund overstuffs the film with scenes played at hyper speed, hectic editing and some semi-pornographic animated sequences in an attempt to show how fashionably cool it is to wallow in degradation. The lack of narrative sobriety and the director’s shallow stylistic copycatting (the result is a crude mixture of Requiem for a Dream, Fight Club and The Salton Sea) is the film’s ultimate undoing. Spun begins with the disclaimer “Based on the truth…and lies” yet the only truth about this wretched exercise in drug culture glorification is that—after being beaten to a pulp by the film’s abundant use of abrasive camera tricks designed to simulate the experience of an intoxicating high—no one is going to care about the story’s authenticity.

Don’t be fooled by the film’s blurry vaginas and black boxes over John Leguizamo’s penis. Columbia TriStar Home Video is making Jonas Åkerlund’s Spun available in a rated version and a separate unrated version for the especially perverted. Since we’re reviewing the rated version, we can’t tell you how much of this DVD edition’s blurring and bleeping of expletives was done to secure an R rating and how much of it was done for artistic purposes. Regardless, if you can stand to watch the film, the transfer is incredible. Considering how many cheap and derivative tricks Åkerlund employs throughout the film, there’s nary an edge halo or a piece of dirt to be found anywhere. As for the Dolby Digital 5.1 surround track, it’s been calibrated to ensure that you’ll feel like you’ve been awake on crystal meth for 40 days and 40 nights.

Considering just how obvious and puerile Spun really is, it’s actually a good thing that there’s no Jonas Åkerlund commentary track to suffer through. Sit back and enjoy a series of deleted scenes, a music video, a TV spot, the film’s theatrical trailer and the special Spun Cook promo trailer.

A day or two in the lives of some of the most annoying people in the world, filmed with equally devil-may-care obnoxiousness.

There There Review: Andrew Bujalski’s Melancholy Patchwork of Soul-Searching Lives