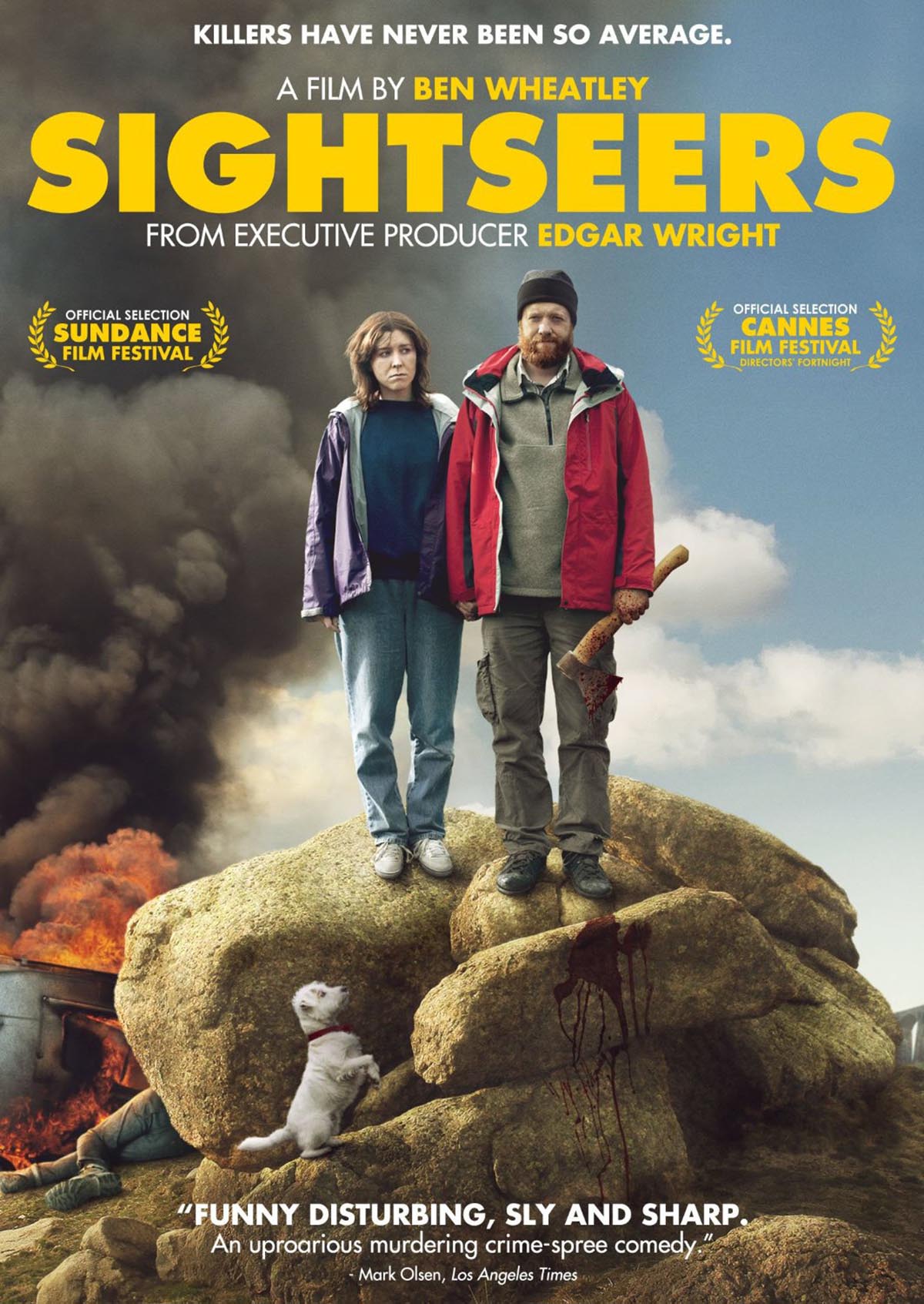 Though the script for Ben Wheatley’s third film didn’t originate with the filmmaker, Sightseers seems the natural choice to conclude a series that, with apologies to Pier Paolo Pasolini’s trio of earthy literary adaptations, could be called the Trilogy of Death. Where Quentin Tarantino goes about constructing a referent-heavy film like Django Unchained by plundering a single genre for its booty of visual and musical cues, Wheatley has grounded his filmmaking ethos in surreal juxtapositions between seemingly disparate genres: Down Terrace suggests The Krays as written by the comedy troupe the League of Gentlemen, while Kill List swerves unexpectedly from unflinching torture porn to nightmarish folk horror a la The Wicker Man. Sightseers is certainly no exception in this regard; if anything, it pushes even further Wheatley’s furor for fusion, yoking together a heady blend of tropes lifted from road movies, British comedies of social embarrassment, and spree-killers-on-the-lam films like Badlands.

Conceived and written by actors Alice Lowe and Steve Oram (with an assist from Wheatley’s frequent co-writer, Amy Jump), the film follows its star-crossed young lovers, ginger kid Chris (Oram) and mousy mother-fixated Tina (Lowe), on a weeklong caravan expedition across the bucolic English countryside. Chris initially seems like the breath of fresh air Tina desperately craves, whisking her away from the suffocating doggy-decorated home she shares with a hypochondriac mother who makes no secret of her immediate dislike for Chris. But Wheatley tips his hand about the couple’s true dynamic by scoring the film’s first music-minded montage sequence, a dizzying whirl of overpasses and off-ramps as the twosome leave the urban blight of Birmingham behind, to the dolorous synth-pop strains of “Tainted Love.”

Preoccupied with the finer points of appropriate behavior while on holiday, Chris soon runs afoul of a litterbug on a tram tour, before running him over with the caravan, the first in a series of killings that he considers justified because of his victims’ breaches of tourist etiquette. When Tina eventually catches on to Chris’s m.o., she mounts the hilariously Swiftian argument that “murder is green.” Unfortunately for Chris, his homicidal urges, kept canalized through obsessive adherence to decorum, unlock something wayward and unpredictable in Tina, who develops a taste for slaughter of her own. Though Lowe and Oran do little to flesh out their characters’ backstories, presenting them as a pair of blank slates whose formative traumas are barely hinted at (hers more so than his), Chris and Tina’s relationship feels acutely observed. So it comes as little surprise to learn in the extras that the writers did plenty of research on killer couples.

This broadly episodic roadmap allows the filmmakers to take satirical potshots at a representative sampling of the British public: pretentious new-age types (“shamans from Portsmouth”), fussy yuppies with a low threshold for clutter, and posh Daily Mail readers all get it in the neck. The freewheeling material also gives Wheatley ample opportunity to apply a surreal cut-and-paste aesthetic to certain scenes, including a psychologically suggestive dream sequence. One particularly gruesome killing brazenly welds an absurd spot-on parody of 2001: A Space Odyssey to John Hurt’s stentorian recitation of William Blake’s Jerusalem (“And did those feet…”). Music and sound design are of course integral to the cumulative impact of Sightseers. Echoing the progressively divergent viewpoints of Chris and Tina, Wheatley scores two murder set pieces to his-and-her renditions of “Season of the Witch.” The psychedelic sludge of Vanilla Fudge’s hallucinatory cover wafts across Chris’s cliff-top clobbering of one bothersome camper, while Julie Driscoll’s less portentous pop delivery accompanies Tina’s dispatching of an irksome bride-to-be.

Considering Ben Wheatley’s penchant for shooting in a naturalistic semi-documentary style, Sightseers clearly wasn’t crafted with an emphasis on opulent visuals. Wheatley and DP Laurie Rose do exhibit something of a painterly eye when it comes to the marvelously mutable English countryside, from the rolling, verdant Lake District to the harsh, craggy promontories of the Peak District, enlisting the variegated topography as an objective correlative to the lead characters’ evolving relationship. The DVD transfer does well by these pastoral widescreen compositions, with vibrant enough color saturation for the occasional flourish (like a key scene shot through a red filter), and solid, uncrushed black levels in the nighttime scenes. The surround mix makes minimum use of peripheral channels, save for some ambient sound effects, and satisfactorily conveys the adroitly deployed musical cues. Dialogue is largely discernible. There are optional subtitles for those who find thick Brummie accents indecipherable.

Nearly an hour’s worth of interviews with stars Alice Lowe and Steve Oram, director Ben Wheatley, producers Nira Park and Claire Jones, and cinematographer Laurie Rose have to make do in lieu of a commentary track. Discussion covers the evolution of the material from standup routine to abortive TV pilot and eventual feature film, creating space for improvisation, and crafting the film’s visual style. What’s here is informative enough. The downside is the presentation: interviews have been hacked up into easily digestible sound bites, complete with gratuitous explanatory intertitles, and haphazard editing sometimes cuts speakers off in midsentence. There’s also a theatrical trailer that (as is often the case) gives away too many of the film’s funniest and oddest bits.

Interview: Ben Wheatley on the Pandemic-Era Resonance of In the Earth

Review: In the Earth Luridly, Creepily Evokes the Totality of Nature’s Wrath