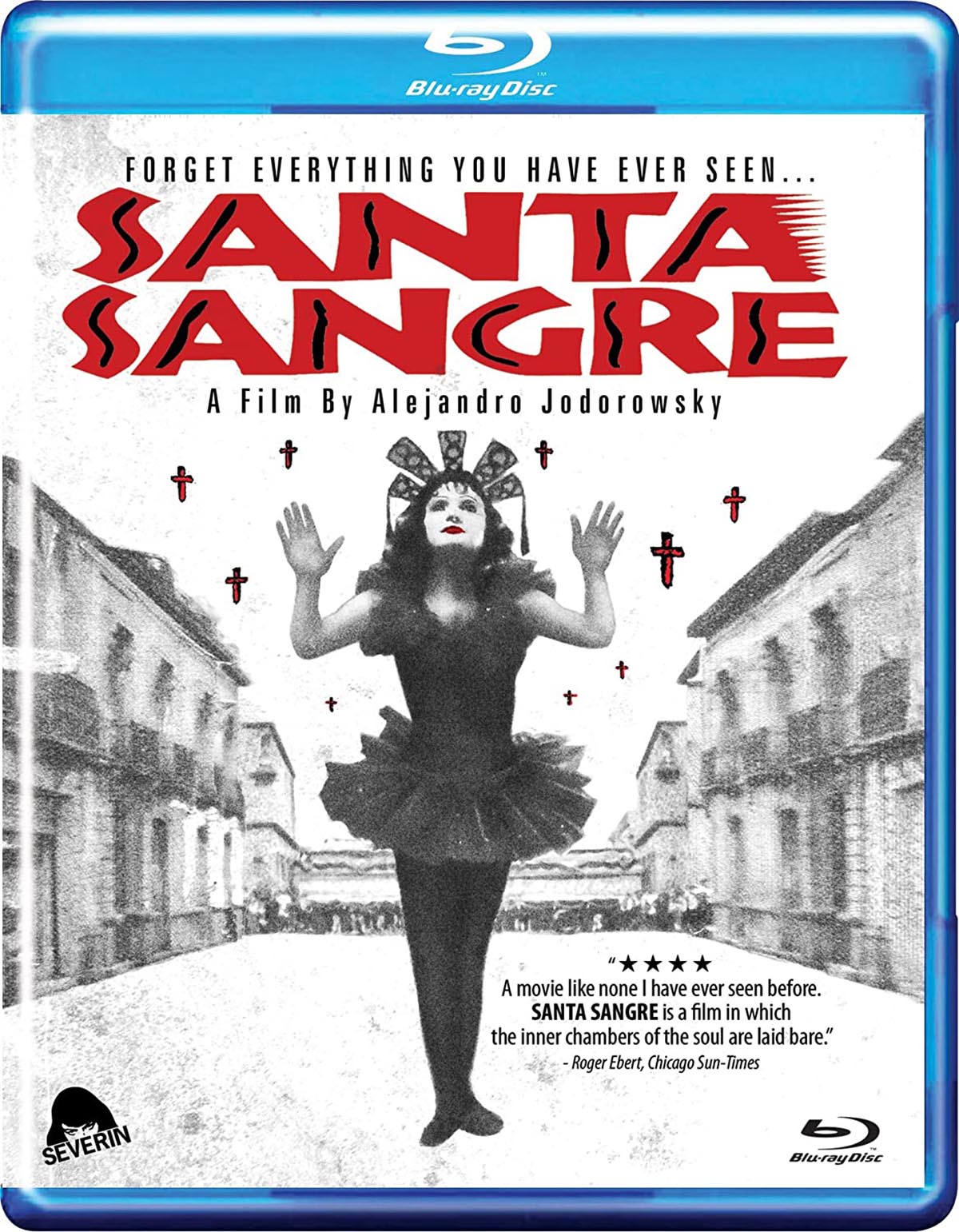 According to Alejandro Jodorowsky, the world is a comedy and the universe is God’s laughter. Such are bold statements coming from an artist whose filmography is marked by ultra-stylized violence within deliberately provocative cultural and religious frameworks. Yet anyone who would doubt the validity of such personal claims (Luis Buñuel criticized Jodorowsky as a “commercial surrealist”) need only bear witness to his 1989 carnivalesque masterwork Santa Sangre to see that the filmmaker’s appreciation of the absurd is true, deep, and entirely free of the cynicism that often marks countercultural pop works. Arguably the director’s most personal film, it’s also his most accessible and certainly his most linear, its expectedly gonzo visual extravagance largely contextualized by the circus culture at its axis, a background culled from the director’s own childhood. For Jodorowsky’s sake, let’s hope the literal similarities stop there.

The lingering effects of trauma is Santa Sangre’s spotlight theme, as the young Fenix (Adan Jodorowsky)—son to an embittered circus couple whose fraught marriage ends in limb-hacking, genital-mutilating tragedy—must overcome the psychotic demands of his mother, Concha (Blanca Guerra), in his adulthood quest of sexual enlightenment. The film begins with Fenix, now age 20 (Axel Jodorowsky), perched naked atop a tree stump in a mental institution. Like Gollum, the only food that interests him is raw fish, and it’s from this most tenuous moment of his existence that we enter his rattled psyche, his tragic story elucidated via flashbacks and flash forwards before his perception of reality ultimately begins to peel away. His carnie childhood plants the Oedipal seeds of unrest via the cult-leading Concha; adulterous father, Orgo (Guy Stockwell); and the mute young mime, Alma (Faviola Elenka Tapia), whom he loves. Returning to him in his adulthood, his now-armless mother takes him from the hospital, willing his arms to do her bidding, from the mundane to the grisly. Horrifically, any girl who catches Fenix’s fancy is promptly executed by the cruel Concha.

Santa Sangre bears similarities to the works of Buñuel, Alfred Hitchcock, and, perhaps incidentally, Tod Browning’s Freaks, but Jodorowsky’s kaleidoscopic aesthetic is distinctly his own. For as random and free-associative as his images strike one as being at any given moment, the consistency with which Santa Sangre doles out madness suggests a most assured and carefully plotted creative process. Jodorowsky’s belief in the humor of all things never translates to exploitation; rather, his shock-treatment approach skewers the accepted normality of the world, revealing the perverse in the quotidian and everyday truths that lie dormant in the strange and bizarre. Santa Sangre dares you to laugh yet never betrays its poker face, a high-wire act that the director refined from his earlier, messier works.

Phallic imagery abounds throughout Santa Sangre, from knives to the bloody trunk of a dying elephant to the anaconda that at one point emerges from an aroused Fenix’s pants, making this a particularly masculine trip down the rabbit hole. But the psycho-sexual angst shared by Fenix and Alma also grounds the film in a universality that transcends gender; in their love they find solace from their past abuses (she was physically tormented and even used for prostitution). From the ever-present Greek chorus of clowns and circus musicians to Fenix’s oddly poetic obsession with James Whale’s The Invisible Man, Santa Sangre is at once disturbingly perverse and devoted to emotional logic; more than a handful of visceral images are likely to burn themselves into your memory banks for good. Like El Topo and The Holy Mountain, it’s an essential work of phantasmagorical cinema.

Having never experienced Alejandro Jodorowsky’s batshit crazy vision until now, I can’t compare this transfer of Santa Sangre to that of previous releases. Still, it’s hard to imagine anyone complaining about an image this gorgeous: Skin tones are remarkably balanced, colors remain clear, separate, and vivid throughout, and I failed to notice even a single instance of combing or edge enhancement throughout (the print used is astonishingly well preserved for a film made off the beaten path). The sound design is less ambitious but equally well preserved here in a modest 2.0 mix (mono only for Spanish listeners); Fenix’s hilarious Christ/chicken hallucination sequence will put your speakers to work, for sure.

There’s no shortage of goodies here, the heftiest being the feature-length making-of doc “Forget Everything You Have Ever Seen,” which traces the film from the conceptual stage through the production and ultimate reception. Less exhausting is a trio of interview sessions from the early aughts, none more entertaining than an on-stage Q&A session during which Jodorowsky speaks virtually uninterrupted on life, art, sex, normality, his love of violence, and everything in between (among the many highlights is his profession that Evil Dead 2’s superiority to Evil Dead is an “absolute truth,” and even this Tarantino diehard was rolling with laughter at Jodorowsky’s articulation of Quentin’s exuberant camerawork). Enthusiasts may be surprised at how toned-down the director sounds on the film’s commentary with journalist Alan Jones, but the track remains engaging and entertaining, even if the material overlaps a bit with the other special features. The “Goyo Cárdenas Spree Killer” featurette takes a peek at the real-life serial killer (who would later recover and return to a perfectly well-adjusted family life) who inspired Jodorowsky’s screenplay, and the 1990 U.K. doc “For One Week Only” tastefully promotes the then-new Santa Sangre without the usual puff-piece flippantry. Rounding out the set: a pair of short films by Jodorowsky’s collaborators, trailers, a music video, and deleted scenes with commentary.

Gorgeous, nightmarish, ethereal, and utterly insane. If your love affair with Jodorowsky hasn’t started yet, now is the perfect time.