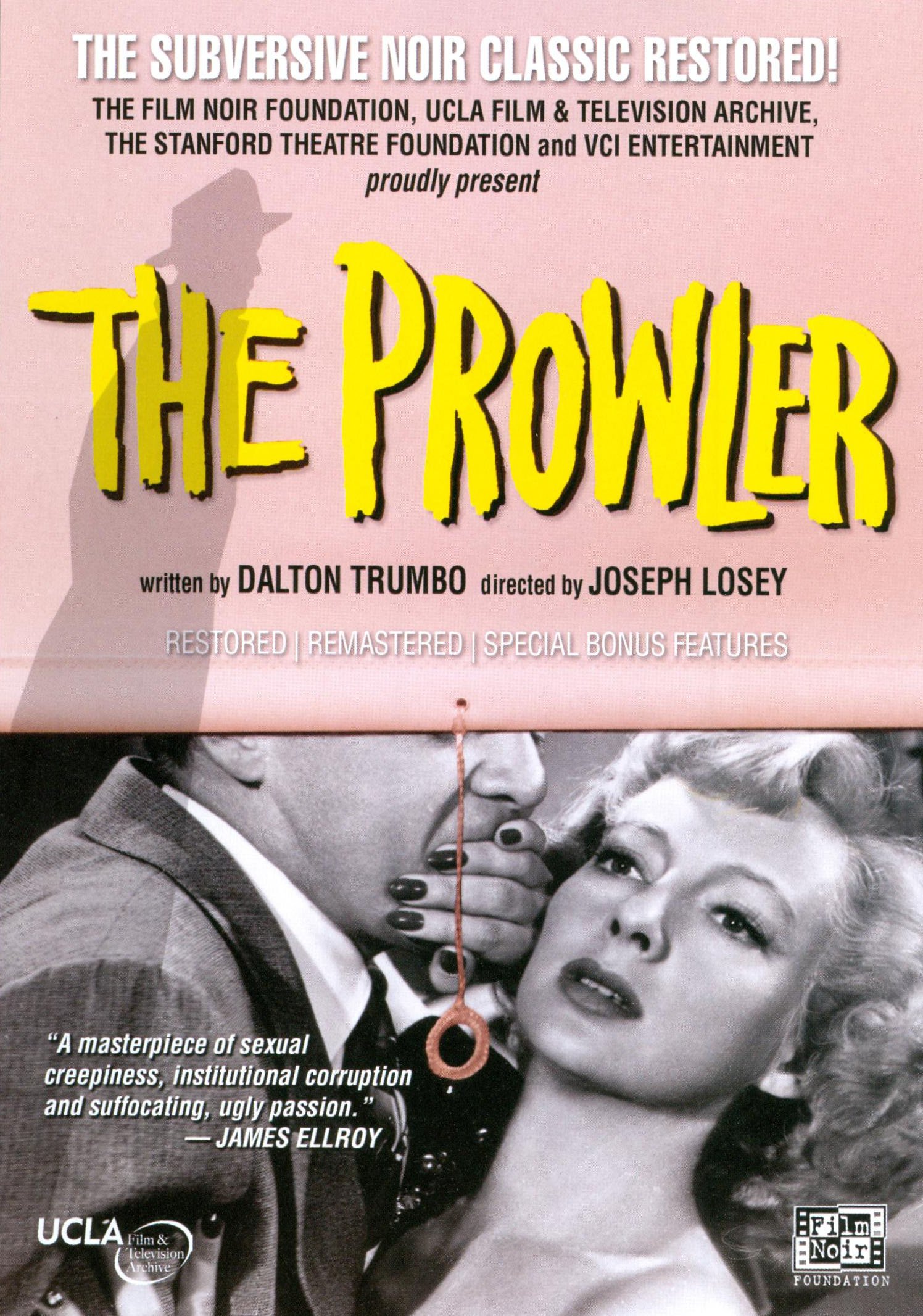 A violent playpen of unconscious and unspeakable desires, Joseph Losey’s The Prowler is not only one of the most well-constructed American noirs, it’s also one of the darkest. It doesn’t just foreground certain verboten sexual anxieties, it shows them as inextricably linked to class resentment, an American unmentionable.

Structurally and conceptually, the film’s closest cinematic siblings are probably Fritz Lang’s The Woman in the Window and Scarlet Street. These films take classic realist scenarios and slowly derange them, collecting broad psychosexual implications while quietly and systematically and radically expanding what we take to be reasonably proportioned moral depravity until we are stuck in what feels like a nightmare or hallucination. The profoundly unsettling effect of all three films derives from our inability to locate the point at which things got out of control. And all three films remind us that violating the codes and conventions of classic realism is often much creepier if you’re able to do so while making the audience nod along and say, “Yes, this could happen. It would happen just like that.”

The film begins when Susan Gilvray (Evelyn Keyes) spots a man staring at her through the window of her house. The camera is roughly in the position of the man doing the staring; so she spots us. This technique of implicating the viewer in a transgression is most strongly associated with Hitchcock, though clearly its use isn’t limited to his films. And it’s not at all an accidental formal device in The Prowler; like most really subversive films, The Prowler isn’t just interested in showing you bad things, it’s interested in making you participate in them.

Susan becomes involved with police officer Webb Garwood (Van Heflin), who, after accusing her of making up the whole lurking dude thing to get attention, returns to her house without invitation and plops down on her couch. It’s here that we begin to read on Susan’s face a struggle between conscious and unconscious knowledge. Despite everything, she refuses to believe that Webb is the creep he is. A pattern of repressed knowledge grows along with its counterpart, cognitive dissonance, and eventually basically drives Susan insane. At first, though, all of this just seems kind of alluring and dangerous and disarming and exciting, which is to say actually really kind of frightening.

As it turns out, Webb really hates being a police officer. Life hasn’t been kind to him. He has had a string of bad luck and, for vague reasons that are neither obviously fair nor unfair, lost his scholarship to a good college. It slowly dawns on us that Webb believes he deserves to be living in a house like Susan’s, in a neighborhood like Susan’s, with a wife like Susan. And who are we to argue?

It turns out that Susan’s husband is a big radio personality who has an evening show and Webb totally listens to this show like every night. He knows who her husband is. Her husband is the kind guy to whom life has been kind. At this point, Webb’s sexual desire for Susan kicks into high gear, fueled by a complex matrix of raw sexual aggression, class resentment, and, we suspect, a more undiluted enterprising spirit: Webb spots the last will and testament of Susan’s husband, though we don’t know exactly what it says.

So Susan and Webb begin an affair, and they rendezvous whenever Susan’s husband is gone, which is to say every night when he’s on the radio. And Susan and Webb listen to him on the radio while they have sex. We don’t see it, but then again we do; they dance to the music he plays on the radio, literally. He’s the absent third term driving their relationship; his disembodied voice fuels Susan’s resentment and loneliness, her will to cheat—and it fuels Webb’s jealousy and aggression, his will to possess.

Riding a tide of noirish inevitably, Webb kills Susan’s husband. The murder lands Webb in court and Susan is called to testify and she totally pretends she’s never seen Webb before. In a way, this act results in far more moral chaos than the actual murder itself. Webb is able to get Susan to marry him by mobilizing her mind’s systematic knowledge-repression to assert his innocence. Basically, he presents her with a set of propositions: (a) she lied for him in court, and (b) if she thought he was a murderer, she wouldn’t have lied for him, because (c) if she did that then she would be a really bad person, so (d) she must be sure he’s innocent, because (e) she isn’t a really bad person. The forces at work in this scene constitute a complex elaboration of the basic structure of “The Fox and the Grapes” from Aesop’s Fables, which reads, in part:

Driven by hunger, a fox tried to reach some grapes hanging high on the vine but was unable to, although he leaped with all his strength. As he went away, the fox remarked, ‘Oh, you aren’t even ripe yet! I don’t need any sour grapes.’

I want the grapes. I can’t have the grapes. I don’t want the grapes. Of course, Susan totally follows this line of reasoning and becomes completely convinced of Webb’s innocence, at least or only on a conscious level. Webb has also managed to convince basically everybody, including, somehow, the dead husband’s relatives, that he’s a really stand-up guy, so no one is at all suspicious when Webb and Susan get married. At this point, we have to admit that Webb is incredibly people-smart and incredibly amoral. These qualities, when combined, challenge some general assumptions therapeutic culture inculcates regarding people who are people-smart; namely that they are caring, loving, kind. In a word: moral. That sensitivity in the literal sense doesn’t necessarily imply sensitivity in the empathic sense is deeply troubling.

But general sociopathy aside, the question of why exactly Webb killed Susan’s husband remains. Testifying to the film’s ingeniously overdetermined structure, many possible motives for the murder seem intensely and equally compelling. There’s the materialist angle, which says he did it as a result of what he saw in the will. There’s the more ideological angle, which says the murder was fueled by class envy, but not blatant self-interest. There’s the purely psychosexual angle, which says husband was the father and Susan the mother—the least satisfying reading in some ways, but one we’re given ample evidence for. Most compelling would be some kind of mutt-like materialist-ideological-psychosexual angle, which would say that Webb’s desire for Susan is an repository for his feelings of class resentment; that he both wants to assert his dominance over a woman with higher class standing through sex and humiliate her husband through the same; when such humiliation turns out not to be enough, guns get involved; murder, in this scenario, is the continuation of sex by other means. There’s a final confession by Webb that supposedly resolves the issue of his motivation, but by that point the film has generated too much interpretable muck to simply rid itself of other valences.

The blacks look inky and the whites shine. Sometimes one notices the grain of the film stock; while this runs somewhat counter to the no-surface-left-unsmoothed digital aesthetic, it’ll hardly anger nerd-core film buffs. This is a very high quality transfer of a film that was, until recently, very hard to find. The sound is good; Evelyn Keyes’s screams carry at the right volume, Van Heflin’s grunts are muted just so, and the husband’s voice carries over the radio with the just the period distortion.

As much an academic production as a commercial one, this DVD comes packed with supplementary material. There’s a documentary about the history of the movie that prominently features James Ellroy, author of the novel L.A. Confidential and a recognized master of para-brow sleaze. There’s also a lengthy interview with Bertrand Tavernier, the French director and general cine-renaissance man. There’s a brief documentary about how the Film Noir Foundation and the UCLA Film & Television Archive teamed up to restore the film. And as has become de rigueur with restorations of this type, you get the original trailer. In addition, there are stills from the original promotional material (spoiler alert: there was a lot of sexual innuendo involved).

Murder, in The Prowler, is the continuation of sex by other means.