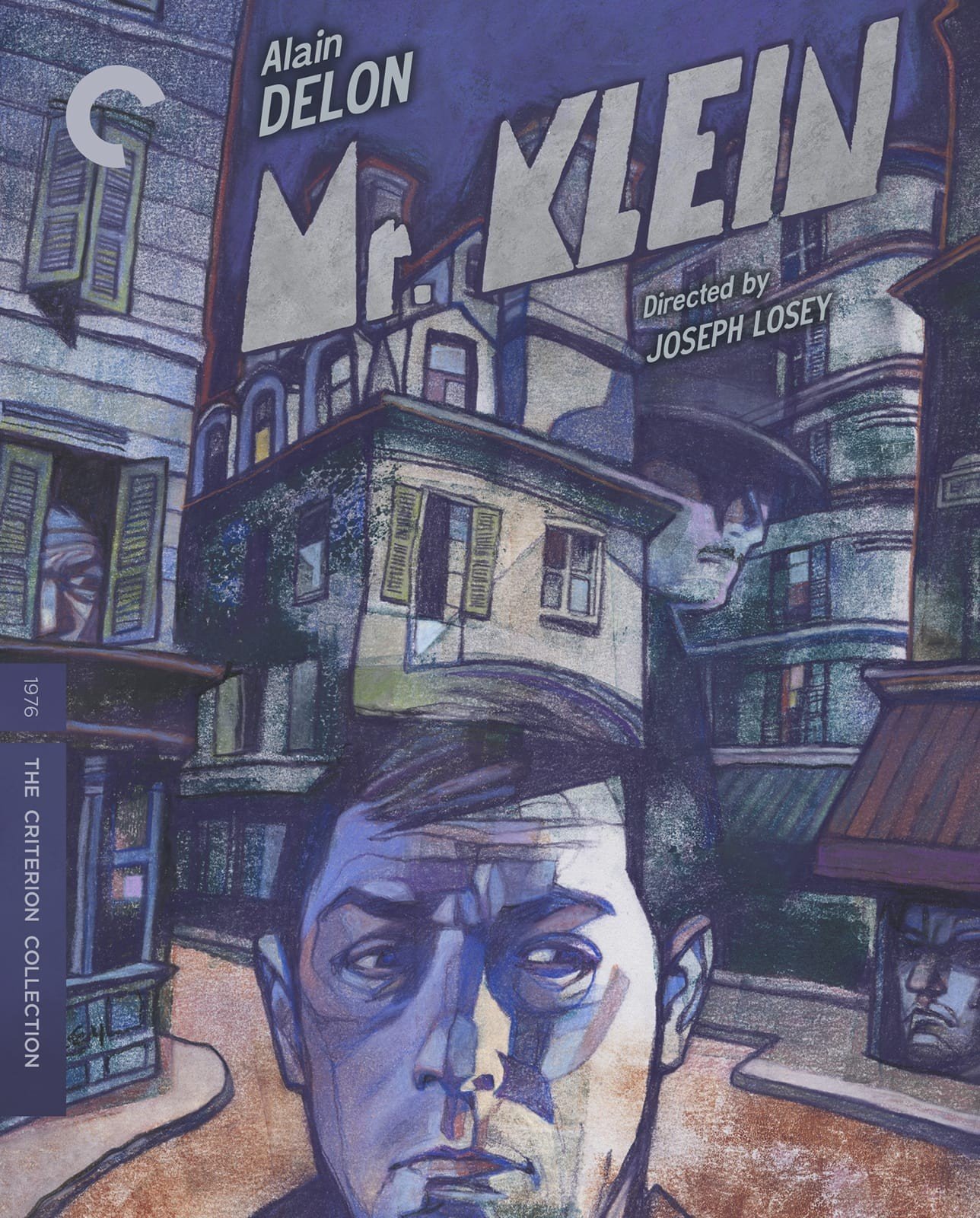 Sometimes it takes an outsider to present an unvarnished view of a society, to isolate and indicate trends or events that insiders would prefer to leave hidden in the shadows. That’s certainly the case with Mr. Klein. The film combines the sensibilities of Franco Solinas, an Italian screenwriter responsible for unabashedly political films like Salvatore Giuliano and The Battle of Algiers, and Joseph Losey, an American expatriate director whose work thrives on ambiguity and often focuses on issues of identity. Their unique vision of war-torn France under the Occupation mixes political thriller and surreal fable in a heady brew, until the story intersects with actual historical events for its harrowing denouement.

Mr. Klein opens with a wince-inducing medical examination as an impassive doctor pokes and prods a middle-aged woman to ascertain whether or not she exhibits Semitic traits. (Tellingly, the woman ultimately has to pay for this privilege herself.) While not narratively connected to the rest of Losey’s film, this scene firmly establishes a mood of clinical detachment that carries over into the demeanor of art dealer Robert Klein (Alain Delon), who we first see getting the better of a seller (Jean Bouise) in a ruthless transaction. The audience then learns that the man is Jewish and that he will use the proceeds to flee Nazi-occupied France.

Events are set in motion when Klein receives a Jewish newspaper intended for another Robert Klein, presumably Jewish, who resides in a far less fashionable part of Paris. Incensed that he should be mistaken for such a person, Klein goes to police headquarters to report the situation, thus initiating a process that will inevitably lead to his own downfall. It’s precisely Klein’s belief in the unassailability of French institutions, as well as his own identity, that comes undone over the course of the film. More specifically, the closer that Klein comes to tracking down the other Klein, the more he assumes the man’s identity.

Mr. Klein effectively leaps across aesthetic registers throughout. Scenes where Klein interviews people who know or have seen the other Klein are shot in a naturalistic, almost documentary style. Other scenes are more dreamlike, like Klein’s nighttime visit to a remote chateau where the other Klein’s mistress, Florence (Jeanne Moreau), lives with her aristocratic family, until they all disappear in the morning light, having fled to Mexico. Another shift in style is marked by the almost abstract framing of scenes that deal with French institutions: a clandestine meeting where the attendees are seen only in shadow, and a vast, Kafkaesque bureaucratic space filled with filing cabinets that bring to mind Orson Welles’s The Trial.

Losey cannily makes use of a baroque sort of symbolism that unabashedly leans into the obvious. A tapestry depicting a vulture pierced by an arrow through the heart appears under the film’s title card, thus twinning it with Klein himself, then is seen again at an auction later in the film, where the auctioneer claims that it represents “indifference, cruelty, and greed.” Florence explicitly refers to Klein as a vulture. Elsewhere, we learn that both Kleins own copies of Moby-Dick, Herman Melville’s morality tale about an obsessive quest that leads only to destruction. After dipping into the tome, Klein’s girlfriend, Jeanine (Juliet Berto), declares, “I’m Ishmael,” which must mean that Klein is Ahab.

Throughout the film, Losey uses mirrors and other reflective surfaces to visually double Klein in the frame. The notion of the double is timeless, archetypal, but it was Dostoevsky who endowed that notion with its modern existential connotations of psychic rupture under sociopolitical strain. The opposite of this process would be reunion with the other, the shadow, in a kind of Jungian individuation. There are hints that this process is at work in the film. On several occasions, when mention is made of the other Klein, Delon’s Klein catches himself looking in a nearby mirror. This slyly suggests that there may be only the one Klein.

In the end, Klein is caught in the midst of the historical Vél d’Hiv roundup of 1942, when French police methodically apprehended around 13,000 Jewish inhabitants of Paris, imprisoned them for a time in the Vélodrome d’Hiver stadium, before loading them in boxcars bound for Auschwitz. Even at this eleventh hour, Klein is offered an out when his lawyer, Pierre (Michael Lonsdale), waves his proper identification papers at him. Klein summarily refuses them, thus cinching his own fate. To bring home the notion that Klein, by his actions, may be expiating an original sin, Losey reprises dialogue from Klein’s initial hard-driven bargain, while the seller can be seen briefly standing behind him in the boxcar. At this moment, as the film fades to black, Klein is both victim and victimizer.

Gerry Fisher’s cinematography appears wintry and washed out, with pale primary colors amid a palette that leans heavily on grays and blues, though Criterion’s color timing leans toward the green in certain scenes. The new 4K restoration definitely improves on the sharpness and clarity of fine details in costume and décor over the 2004 DVD release. Flesh tones look lifelike, blacks deep, and grain levels never get too thick. The French LPCM mono sturdily conveys dialogue, period-specific chansons, and bursts of Egisto Macchi’s ominous, discordant score.

Criterion includes a handful of archival and new interviews. From 2021, critic Michel Ciment goes over Joseph Losey’s career in America and England at some length before zeroing in on Mr. Klein, for which he provides a very cogent and informative reading. There’s an audio-only interview with Losey conducted by Ciment from 1976, in which the filmmaker discusses his political leanings, his attraction to the material, and his approach to making the film. A short archival piece, also from 1976, intercuts between interview snippets with Losey and star Alain Delon and protracted, unrelated scenes from the film. Filmed in 2021, editor Henri Lanoë talks about growing up during the Occupation, getting the job on Mr. Klein directly from Alain Delon, the differences between American and French editing techniques, and his overall assessment of the film. Also included on this disc is Story of a Day, a feature-length documentary from 1986 about the historical Vél d’Hiv roundup. Finally, there’s a booklet with a perspicacious essay from film scholar Ginette Vincendeau.

Blu-ray Review: Frank Tashlin’s The Girl Can’t Help It on the Criterion Collection