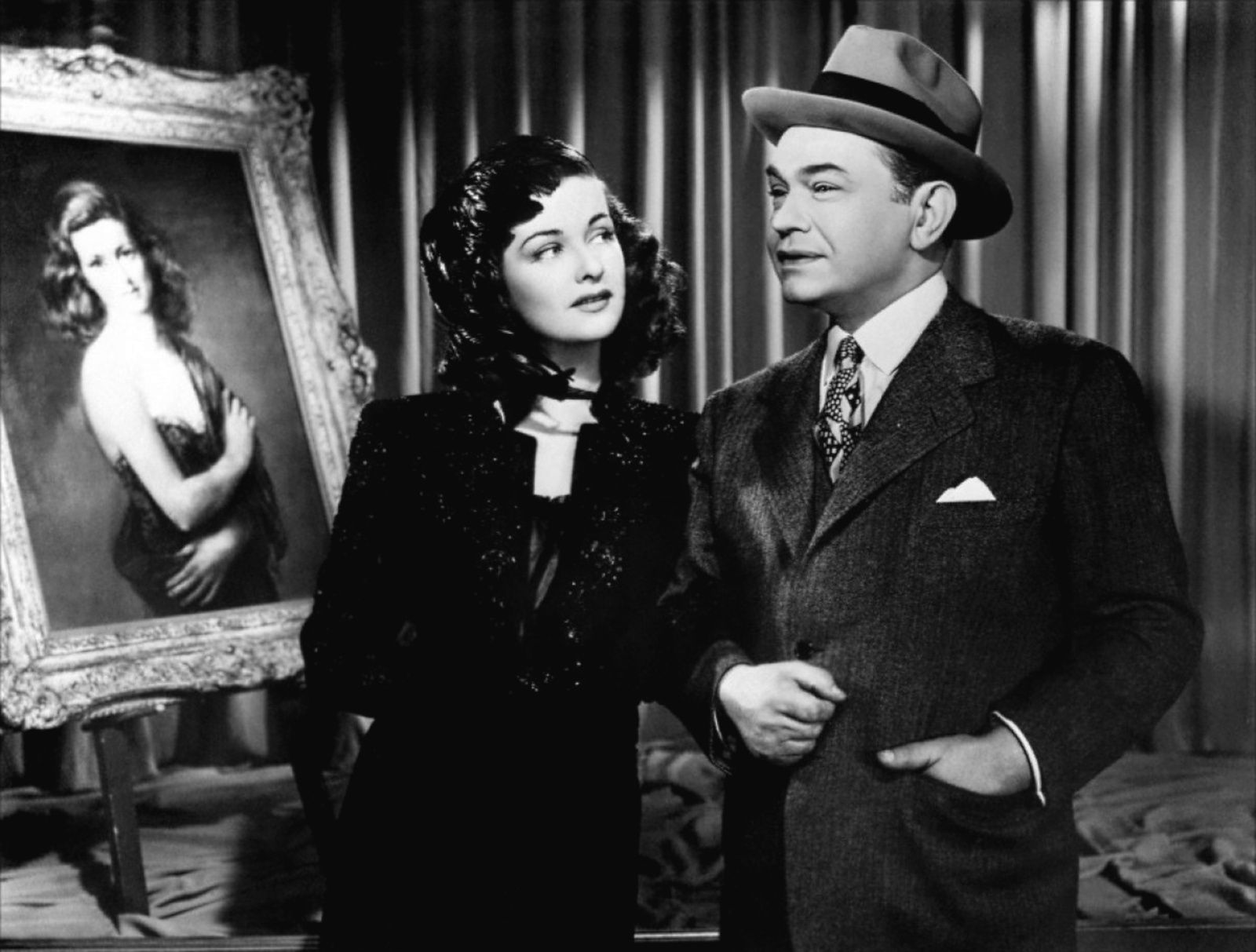 As part of the original group of film noirs identified by Cahiers du Cinéma (along with The Maltese Falcon, Double Indemnity, Laura, and Murder, My Sweet), Fritz Lang’s The Woman in the Window has enjoyed a reputation as a genre cornerstone. It boasts many of the key noir ingredients: a man meets a mysterious woman and soon finds himself pursued by tough hoods, the law, and a never-ending supply of Venetian blinds. But from the opening scene, in which Freud’s name looms on a chalkboard behind the unfortunately named criminology professor Richard Wanley (Edward G. Robinson), it’s clear that Lang is more interested in psych studies than any sort of existential howl. After Robinson sees off his vacationing family (in an astonishingly quick dispensing of family ties) and admires a gallery-window portrait of a fetching Joan Bennett, he and his private-club friends lament their middle-aged stodginess before he drifts off to sleep in one of the club’s armchairs. Strong stuff! On the walk home, Wanley meets the woman whose portrait he’s been admiring, they share a drink, and the two swing by her place to celebrate 15 plot-free minutes with some wine and innocuous conversation. It’s the sudden entrance of a jealous beau, and a conveniently nearby pair of scissors, that finally jumpstarts the narrative engine. After quickly disposing of the body, Wanley nervously partakes in a privileged view of the investigation (the D.A. is one of his club friends). The late-second-act arrival of Dan Duryea, as the erstwhile bodyguard of the deceased, casts the boilerplate aside. But his weaselly menace isn’t enough to push The Woman in the Window, with its unconflicted protagonist and a femme that’s far from fatal, out of melodrama to the realm of potent noir. In the same year that Hitchcock employed Salvador Dalí to act out psychology tropes in Spellbound, Lang’s familiar, ripe-for-interpretation trademarks—mirrors, clocks, and shop windows—dovetail nicely with the dime-store psychoanalysis. Although the much-maligned ending (a Code-satisfying change from the film’s source novel) makes more sense after repeat viewings, The Woman in the Window is mostly notable as a dry run for the following year’s Scarlet Street, a reunion of Lang, Robinson, Bennett, and Duryea that would boast tighter plotting, richer characters—and a pitch-black ending.