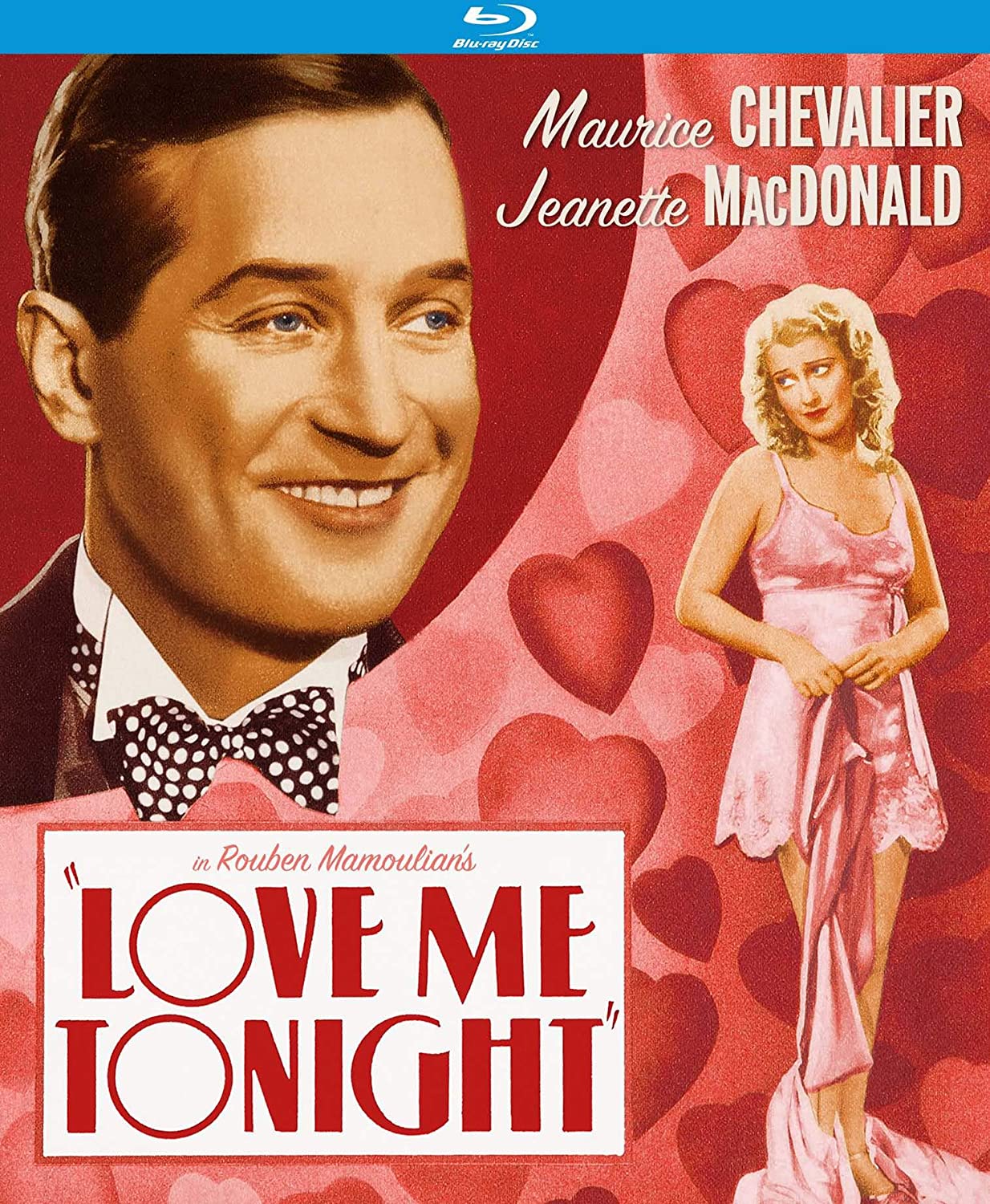 For all the ink spilt extolling the innovations of Rouben Mamoulian’s Love Me Tonight—the remarkably quicksilver visuals, the classy theatrical leaps of faith, the devil-may-care optimism—the film’s most astonishing feat is the vulnerable and charming performances that the director finesses from Maurice Chevalier and Jeannette MacDonald. The former, who had become a star largely on the strength of his willingness to pimp out a ludicrously guttural patois Françoise in Ernst Lubitsch’s The Love Parade (one of many pairings with MacDonald), plays the role of a sweet-natured Parisian tailor, Maurice Courtelin, with far fewer garish expostulations than usual. Courtelin’s consistently dire financial situation also puts him on an even keel with the then-contemporary Depression-era audiences; no longer was Chevalier the mysterious-if-gregarious “other,” but a member of the proletariat just like everyone else. And MacDonald, who probably died wishing she could’ve widened her already ample tremolo a bit more, doesn’t so much change her approach to singing but is for once blessed with a character whose unfeasible romantic ideals are met with a touch of scorn (contrast this with her portrayal of the holier-than-thou Mary in San Francisco).

Love Me Tonight opens early one morning in Paris. A few workers step out into the street and begin pounding away at the concrete. This is the foundational beat. Eventually, shopkeepers emerge to sweep away dust from the sidewalk, supplying a counterpoint to the construction worker’s pulse. Housewives open their windows to shake out rugs, adding to the rising symphony of musique concrete. By the time Chevalier looks out his window to exclaim “this city is too noisy for me,” Mamoulian’s daring orchestration of “The Song of Paree” has taken the world of sound films light years beyond what was largely considered acceptable in the “talk into the plant” era of early talkies. (It has also predicted the funky fresh street rhythms of the percussive physical theatre troupe Stomp by roughly 65 years.) And it’s only the first sublime moment in a film that tiptoes lighter than air for its entire running time.

Mamoulian, who had been a fantastically successful theater director in New York, was wooed by Hollywood to make his first film, Applause, in 1929. This pre-Code film won rave reviews from urban critics for its audacious angles and then-unparalleled sleazy atmosphere (sadly, the film was only in theaters for a few weeks before the stock market crash turned audiences off downers for nearly a decade). But half of the credit for the success of the film needs to go to Helen Morgan’s ferociously unbridled, Greek-like tragic performance as the long-past-her-prime performer. Plot-wise, Applause is little more than an early incarnation of the sinful maternal-sacrifice films that would flourish during the Depression; Morgan’s full-tilt blitzkrieg of self-pity while left forgotten and alone in her apartment brings to mind Ellen Burstyn’s Oscar-nominated tour de force in Darren Aronofsky’s Requiem for a Dream (both got to wear fright-wigs). Practically as flamboyant was Mamoulian’s camera, which prowled every which way to mirror the brassy mise-en-scène. By the time he had established himself as a flashy purveyor of urban horror—Applause, City Streets, and Dr. Jekyll & Mr. Hyde—Mamoulian’s next move could scarcely have been less predictable.

Love Me Tonight’s Maurice Courtelin, who like everyone else in Paris owes everybody a little bit of money, has his best employees working overtime on a full suit of clothes for the wealthy Gilbert (a daft Charlie Ruggles), nephew of the wealthy Duke D’Artelines (C. Aubrey Smith). When Courtelin finds out that Gilbert’s allowance from the duke has been put on permanent suspension, he sets out to the family’s manor to collect his due. Along they way, he meets MacDonald’s beautiful and lovesick Princess Jeanette (the two had previously connected indirectly in a showstopping montage wherein the song “Isn’t It Romantic?” travels from Maurice’s shop through cabs, trains, military regiments, and gypsy bands to the countryside manor). Amid a gaggle of rich eccentrics—Myrna Loy’s nymphomaniac Countess Valentine; a trio of aunts who, though introduced as an oddball parody of MacBeth’s witches, turn out to be an innocuous flock of hysteria-prone biddies—Maurice pretends to be of royal blood so as to make himself welcome at the mansion and thereby initiate the game of love.

Though set pieces in Love Me Tonight are as abundant as they were in Mamoulian’s earlier films, their frothiness (and the acknowledgement of the diversion-based nature of the plot) allows them to snuggle into the fabric of the film in a much less stilted manor than Applause. The spirit of experimentalism didn’t escape the famed Broadway composer-lyricist team of Richard Rodgers and Lorenz Hart either. They supply the festivities with a full slate of witty, cheeky tunes that are as willfully facetious (“Mimi”) as they are heavily meta (on the artifice of the musical comedy, much in the same way as the more renowned Singin’ in the Rain).

Clever double entendres add to the fun, as when the princess sings “Lover” as she drives a coach and at the end of each verse yells an otherwise randy lyric as an aside to her horse: “You and I will roll in the…Hey!” Later in the film, she and Courtelin hear the titular duet in their sleep, and Mamoulian uses a split-screen effect to give the appearance that the two are lying side by side, post-coitus (predating a similar sequence in Jean Vigo’s L’Atalante). Love Me Tonight still stands as a definitive musical because, aside from the filmmaking wonders Mamoulian conjured, it conveys one universal truth to the musical genre: that there’s no better motivation for breaking out into song than to express sexual satisfaction.

Sourced from a new 4K master, Kino Lorber’s Blu-ray is an improvement over their spiffy 2003 DVD edition. The images are stable throughout, maximizing the textures of the medium-contrast cinematography; details are quite visible even across exceptionally bright scenes, and the black levels are deep and artifact-free. Only a few instances of print debris and scratches can be seen in an otherwise immaculate transfer. The soundtrack cleanly balances the boisterous score with the dialogue and singing. Only the tinny quality inherent to early sound films dates the audio, but the film’s busy soundtrack has never sounded as full as it does here.

On his commentary track, film historian Miles Kreuger is prone to pauses and dry summarizing, but he provides interesting information about the film’s productions and the careers of the cast and crew. Clips of Maurice Chevalier and Jeanette MacDonald singing songs from the film are included, as are screenplay excerpts of scenes that were deleted prior to shooting. There’s also a gallery of various production stills and documents, along with fascinating notes submitted to Paramount from the then-new Hays Office that show just how much of the film’s blatant innuendo is the product of incessant revisions and censorship that masked even more explicit content as was originally written.

Rouben Mamoulian’s antic musical is one of the first great comedies of the talkie era, and an exceptional new transfer highlights its aesthetic charms.