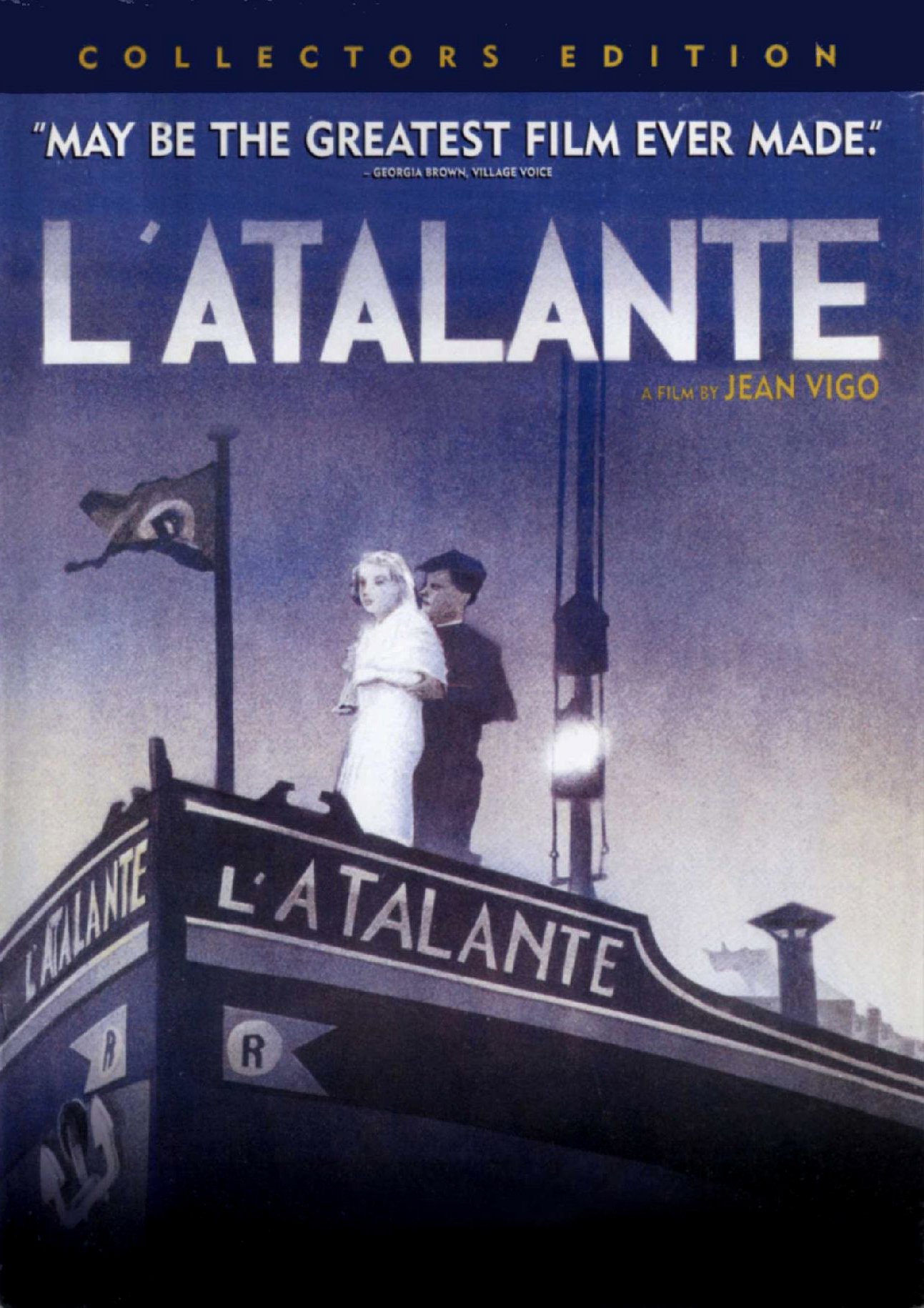 Like Charles Laughton with his pastoral nightmare The Night of the Hunter, Jean Vigo directed but one feature-length film. But such are the reputations of their respective films that the two stand shoulder-to-shoulder with the most critically acclaimed auteurs in film history. Vigo’s L’Atalante is, like Hunter, a lightly trancelike and magical river tale. Vigo was the son of a famous anarchist and died of lung failure almost immediately following the film’s difficult postproduction hassles with Gaumont-Franco studio. His 1933 short Zero for Conduct was raising hell with censors for what was seen as a glorification of rebellion just as Vigo and his producer partner Jacques Louis-Nounez were preparing to go the next step and craft a full-blown feature. Even though Louis-Nounez offered his cohort a simple love scenario (perhaps to avoid more problems with the censors), Vigo would eventually fill the spare structure with a muted anarchist sensibility (via an almost casually carefree approach to mise-en-scène and suggestive erotic imagery) that, unlike Zero, truly counts as subversive.

Jonathan Rosenbaum once noted that L’Atalante was a model representation of a “bisexual film,” or, rather, a film in which the divisions of sexual orientation are practically irrelevant (many biographies label Vigo as bisexual). Sure enough, one of the very first shots of the film shows two men holding hands as they run through a deserted street. They are late for a post-wedding processional that gives way to an image of amorphous sexuality: the wedding party is being instructed to form a line behind the newlyweds in pairs and, since not everyone in the party came as a couple, some pairings are same-sex. The new bride Juliette (Dita Parlo) is a French country girl who, at the start of the film, has never been outside of her close-knit and humble community. Her husband Jean (Jean Dasté, who also appeared in Zero for Conduct) is the captain of the Atalante shipping barge and the two men holding hands are his first mate and the cabin boy. The barge is Juliette’s new home—her previous existence as a sedentary being is diametrically shifted and she is now expected to be without roots. She is swung on a strut from the shore to the ship by the fleshy first mate, Jules (Michel Simon), whose swaggering brusqueness in berating the cabin boy is magnificently undercut by Vigo’s simultaneous establishment of his love for his pet cats.

The first stunning sequence of the film sets up Juliette as a both fragile and fearlessly curious young woman: Parlo leans against and over the jutting iron protuberances of her new home as dusk falls around her. Her virginal white gown is offset by the shadows of industrial phalluses, foreshadowing her impending emergence as a powerful sexual creature. The representation of a newfound feminine dominance aboard the Atalante is conveyed with Juliette’s dreamlike saunter across the length of the ship, undoubtedly the most memorable image from the film and one Guy Maddin echoed in his 1995 avant-garde short Odilon Redon. At the same time, Vigo prefigures the softening effect this sexual awakening will have on Jean. As Jules runs along the deck to embrace Jean, he trips to his knees and three of his cats attack him, leaving a scratch along his cheekbone. Juliette finally warms up to her situation, and it’s left provocatively nebulous as to whether her thaw can be attributed to simple pity for Jean or because the slit in his cheek triggers heretofore untapped sadomasochistic desires (note how she delicately caresses the wound as she kisses him). An Erotica-era Madonna, who insisted that the initials “D.P.” be etched into her faux gold tooth in a reference to Dita Parlo, clearly understood and respected the monumental feminine power of this sequence.

For the next few days, Jean attempts to navigate the waxing and waning influence of his assertiveness over Juliette. When they discover that another of Jules’s cats has given birth to kittens in their bed (there are more cats in L’Atalante’s scant 89 minutes than there are perhaps in Chris Marker’s entire body of work), Jean is the one who castigates Jules, but it is Juliette who proclaims that “things are going to change” as Jean gently lifts a tabby into his arms. Almost immediately afterward, Jean is shown helping Juliette with the laundry. While folding the sheets back in their room, she’s seduced by the voice of a radio announcer from Paris, a big city she’s never been to. Jean, who goes back and forth between big cities as a matter of course, discovers that even this small pinch of casual urbanity gives him a leg up in their relationship and so he dangles the promise of a good time in Paris when they arrive.

En route, Juliette gets to know the enigmatic Jules, whose cluttered room suggests a past life with myriad chapters (the cinematography by Boris Kaufman finds ever ingenious methods of traversing L’Atalante’s disorder). Michel Simon’s crustily genial portrayal of Jules embodies the pansexual lawlessness of Vigo’s cosmos. The icebreaker between Juliette and Jules is when he surprisingly proves to be a master of the sewing machine. She answers by having him put on a dress for her to pin. Later when she visits his room she discovers a picture of a handsome, shirtless man, who Jules hesitatingly calls an old friend (though it could have easily been a lover). Then she discovers the pickled hands of the man in a jar. Jules claims it’s all he has left of the old friend. When Jean bursts in on the two and blows his top, you don’t exactly know if it’s because he suspects something sensual is being shared between them (which is actually the case) or because Jules beats Jean at his own game of appealing to Juliette with a multi-sexual approach (which he actually does, hands-down).

Along with the dissolve of sexual signifiers, Vigo also conveys a certain motif that even within the anarchy of life there is a sense of inevitability. At the very moment that Jules visits a fortune-teller in Paris, Jean tells Juliette that he dreamed she would soon leave him. Just as the fortune-teller’s prediction that Jules’s cards are good (later on he narrowly avoids losing his job, as well as Jean’s), the dream foretells of the couple’s impending separation. When Juliette finds herself enamored with Paris to the extent that the city is no longer Jean’s gift to her, he pulls anchor and leaves her there. The underlying theme of cosmic unity and predestination reaches its apotheosis in the stunningly frank eroticism of Jean and Juliette’s fantasy sex tryst. Vigo presents both of them stroking and embracing themselves alone in their separate beds with a fantastic sensuality (Juliette traces her collarbone with her fingers, Jean kisses his own bicep). The crosscutting becomes more forthright and the actions begin to appear parallel (Jean’s head swoops downward and Juliette buries hers in the pillow, suggesting oral sex). As the characters achieve catharsis, so does Vigo’s use of thematic repetition, and the result combines to form an absolute cinematic orgasm. Vigo’s L’Atalante, in its mature illustration of sexual freedom and psychosexual intuition, stands as one of the most beautiful and rich celebrations of human connection in the history of cinema.

New Yorker used a 2001 revision of the restored elements that were used in 1990 to reconstruct Vigo’s vision of L’Atalante, and not the mutilated version that was put out after his death under the title of Le Chaland Qui Passe (after the ditty Gaumont wanted to tie-in with the film). This restored work, and the transfer by New Yorker, is as gorgeous and vibrant as one could possibly hope for from a film originally released in 1934 (the only transfer I’ve seen that tops it is Criterion’s Passion of Joan of Arc). The frame shifts and jitters every now and then, and my DVD player revealed occasional jagged lines from bright white edges (reportedly due to PAL-to-NTSC conversion), but overall, this is perhaps the best L’Atalante has looked since its original release. Sound restoration hasn’t caught up with film restoration at this point (most of the sound effects for the high-profile restorations of Vertigo and Rear Window had to simply be re-recorded), so the sound aspect of the DVD is well behind the image quality. Still, though often hollow sounding and obviously dated, it’s not completely a wash. And Maurice Jaubert’s music score comes through with clarity.

Though by no means the mother lode of offerings on the French two-disc set of Jean Vigo’s entire body of work, New Yorker has provided an extensive gallery of production stills and behind-the-scenes photographs, as well as a separate gallery of theatrical posters for the film’s various incarnations. There’s a Jean Vigo filmography which takes, naturally, a single page to explore. The meatiest supplement is a short 20-minute featurette titled “The Making of Jean Vigo’s L’Atalante,” although it’s less a peek at the film’s production history (which is covered in the liner notes) and more an appreciation from film professor Annette Insdorf and film historian Bernard Eisenschitz.

The naturalistic sexuality of Jean Vigo’s only feature film is even still ahead of its time.