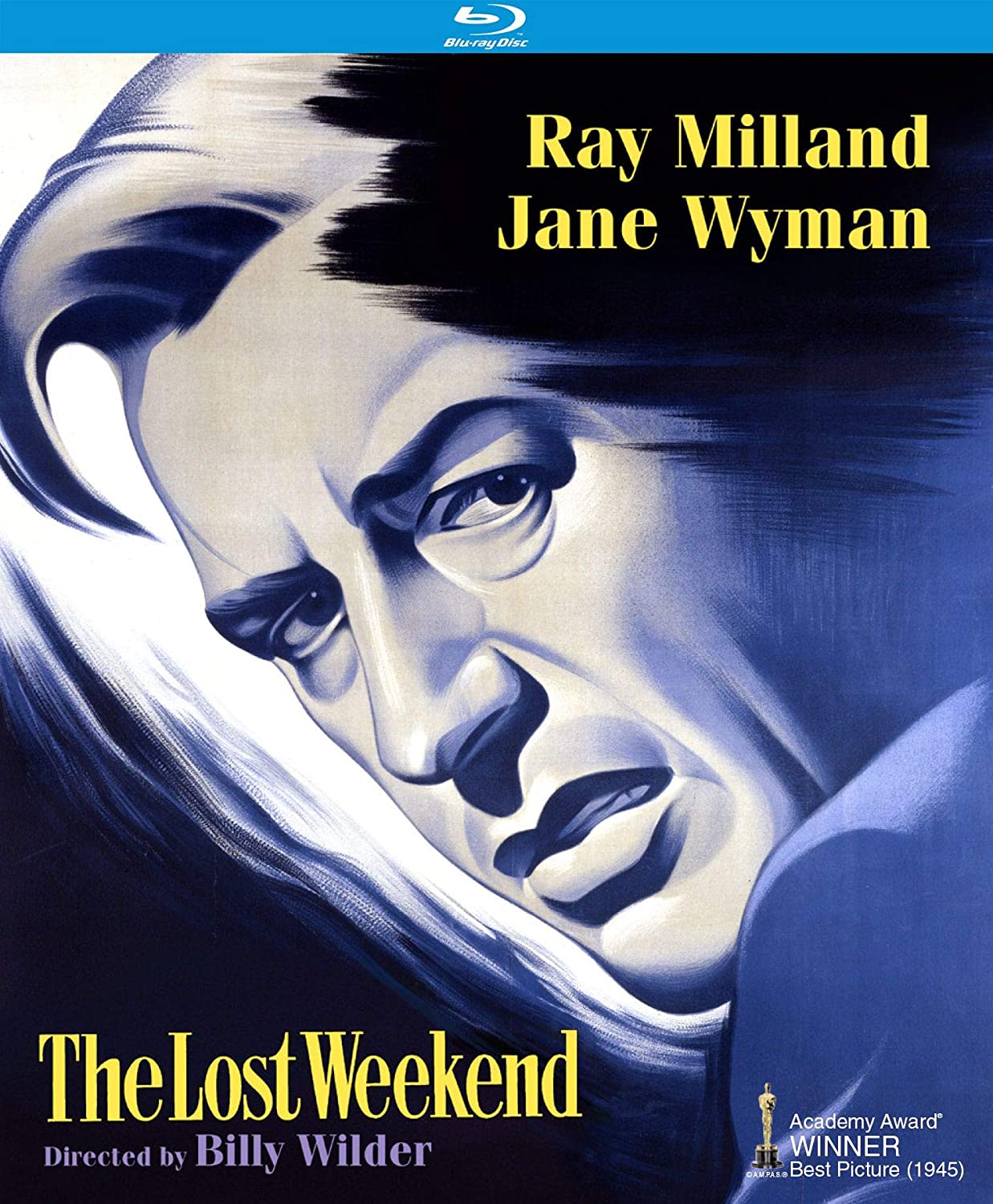 Famous as one of Hollywood’s earliest explorations of the realities of alcoholism, Billy Wilder’s The Lost Weekend has attained a reputation as a trailblazer that’s grown stodgy over time. The Oscar-winning film does feel self-consciously presentational at times, such as in the way that Don Birnam (Ray Milland) loudly describes the contours of his lusts and fears, though alcoholics are prone to doing exactly that. Part of the insidious pull of addiction—especially alcoholism, which is enabled by society on a scale that’s unparalleled by most other vices—is the way it allows addicts to sustain their personal mythologies. Don may voice subtexts that are already evident in Wilder and Charles Brackett’s screenplay, but when he talks obviously and theatrically about his struggles with the bottle, he’s understood by the filmmakers to be performing. And this performance props up Don’s drinking and vice versa, allowing him to glamorize himself as a grand struggling writer and boozer, rather than just a boozer.

The film opens with an aerial shot of Manhattan that would almost certainly inform the first image of Alfred Hitchcock’s Psycho, similarly suggesting that we’re randomly homing in on merely one of countless stories playing out in the city. Don’s been dry for 10 days and is set to travel into the country with his brother, Wick (Phillip Terry), so that he may rest and recover. It’s clear from the outset, given Don’s brittle, angry demeanor, that he isn’t yet interested in recovery—a suspicion that’s boldly confirmed when he pulls a string dangling out of the apartment window to reveal a quart of rye, which he attempts to drink behind his brother’s back. Don’s caught, though he’s granted a reprieve when his girlfriend, Helen (Jane Wyman), drops by. Astonishingly, even after the rye has been discovered, Don convinces Wick to go to the opera with Helen and leave him alone in the apartment until they’re to reconvene and depart for the country in a few hours. Meanwhile, Don falls off the wagon and stays drunk for several days, while Wick, disgusted with Don’s relapses, leaves the city anyway.

The notion of Wick and Helen irrationally leaving Don this golden opportunity to drink is brutally believable. Such indulgence springs from a certain naïveté—that this time Don will master himself—as well as from simple exhaustion with fighting a seemingly unwinnable fight. It’s easier to let the drinker drink, especially in a society that sees teetotaling as a little unnatural. Wilder and Brackett are wickedly aware of society as a kind of contemptuous enabler, and this awareness imbues The Lost Weekend with an untarnished power. Besides Wick and Helen, there’s Don’s regular bartender, Nat (Howard Da Silva), who castigates him for his drinking yet continues to serve him, sometimes criticizing him while in the very act of pouring a shot. Of course, only Don can stop Don from drinking, and such sequences capture the weird comfort for those with lives out of balance of entombing oneself in a bar, with everyone implicitly understanding that you are enslaving yourself to a potentially fatal yet reassuringly predictable routine, which is glossed over with in-jokes, gossip, and shtick.

Wilder doesn’t entirely go for the preaching of many “issues” productions in The Lost Weekend, informing it instead with the lurid style and tone of his prior Double Indemnity. The dialogue here is hard, terse, and occasionally floridly comic, and noir-esque images vividly embody the pain and double life of Don’s sickness, such as the growing water rings on the bar from his endless shots, or the row of upturned stools and chairs that resembles the fence of a prison while establishing that Don’s getting a drink as early as possible, or a hallucination scene, symbolizing a case of the “DTs,” that suggests a moment from a gothic horror film.

Most unforgettable, and famous, is Don’s neorealistic trudge throughout the streets of lower Manhattan to pawn his typewriter for drinking money. Every pawn shop is closed, and his hungover roasting under the sunlight suggests the ultimate physicalizing of the anguish of thirst. Wilder even generates a perverse kind of suspense from empathetically linking us with Don’s enablers. As Don scurries from one embarrassment to the next, desperate for booze, we come to root for him to have it so as to grant us reprieve from the film’s modulated tension. Such manipulation is especially notable when Don remembers where he hid a bottle: within a ceiling light, its silhouette inadvertently outlined from above like an ironic gift from heaven.

The Lost Weekend is nevertheless inhibited by certain concessions. Lost amid Wilder’s baroque touches—most regrettably the theremin sound that often accompanies shots of tempting alcohol—is the casualness of Charles Jackson’s autobiographical novel, which dramatizes a bender with a matter-of-factness that’s truly terrifying. Wilder and Brackett also elide Jackson’s implications that Don is gay, as well as the author’s uncompromising “no exit” finale, though the film’s ending is less conclusive than is generally acknowledged. While these failures of nerve signify the constraints of American filmmaking during the reign of the Hays Code, The Lost Weekend remains a haunting tour of a very real kind of hell.

This new 4K restoration of The Lost Weekend boasts an image with exceptional depth and clarity, emphasizing the gritty details of the film’s New York City locations, and the vastness of deep focus imagery that conveys the protagonist’s addled state of mind. Blacks are rich, whites are sharp, and the film’s intricate use of light and shadow is vividly preserved. The sound mix is clean and sturdy, particularly underscoring the diegetic sounds of booze as it’s poured and consumed, as well as the dimensions of Miklós Rózsa’s rather insistent score.

The audio commentary by Joseph McBride is unusually personal, given that the film historian is a recovering alcoholic. An expert on Billy Wilder, McBride is somewhat leery of The Lost Weekend, given its reverberations for him and some of the fashions in which it feels “distanced from” its subject. Riffing on a review written by the great novelist and critic James Agee (who was also an alcoholic), McBride says that he believes the film doesn’t capture the “euphoria” of alcoholism, concentrating instead on its humiliating, hungover lows. McBride also contextualizes the film within Wilder’s career and discusses the director’s somewhat tempestuous relationship with Charles Brackett, whose wife was an alcoholic. Perhaps most profoundly, McBride eventually suggests that The Lost Weekend was partially Wilder’s act of working through his feelings on the Holocaust, from which he fled and to which he lost his mother. This supplements set is otherwise slim, including a radio adaptation of the film as well as several trailers, though this commentary elevates this package considerably.

Kino outfits the despairing, pioneering The Lost Weekend with a beautiful transfer and one of the best audio commentaries of the year.