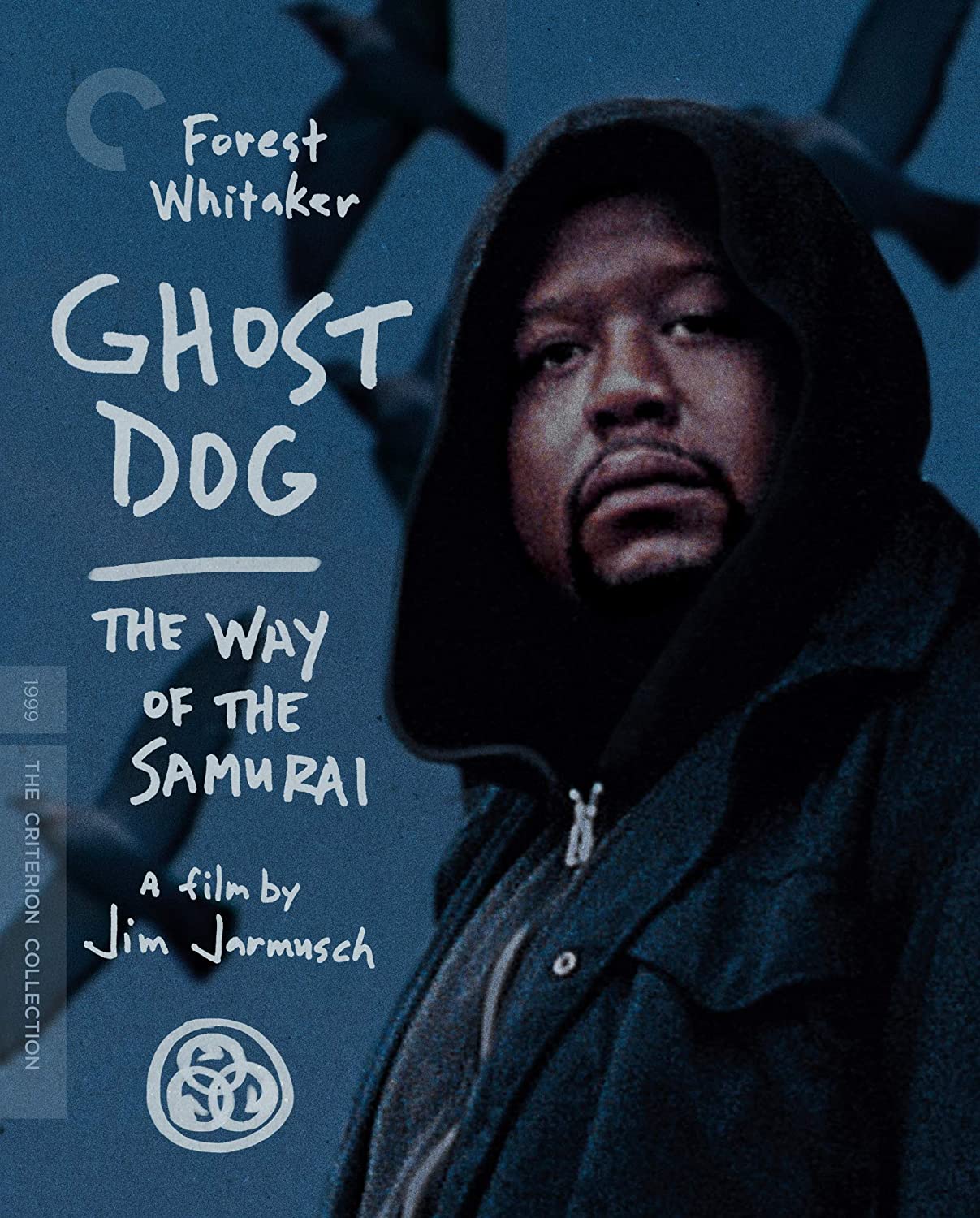 Jim Jarmusch’s Ghost Dog: The Way of the Samurai is informed by an eccentric mélange of cultural touchstones and film genres, blending together allusions to everything from samurai and mafia codes to ’90s hip-hop culture and mid-century TV cartoons. Its transporting of the traditional samurai mythology and way of life into a 20th-century urban landscape recalls Jean-Pierre Melville’s 1967 neo-noir crime drama Le Samouraï, but Forest Whitaker’s Ghost Dog is of an entirely different breed of modern samurai hitman than Jef Costello, Alain Delon’s steely-eyed, trench coat- and fedora-donning throwback.

Not that Ghost Dog is any less implacable when carrying out his own hits, but he’s almost singularly defined by his myriad idiosyncrasies and paradoxical qualities. Like Jarmusch’s film itself, Ghost Dog is an uncanny fusion, sporting corn rows and blasting the hypnotic beats of RZA’s score through the speakers of each of the many cars he steals, all the while adhering to the strict codes of the samurai to feed his soul and shape his behavior.

The first time we see Ghost Dog, he’s reading from Yamamoto Tsunetomo’s Hagakure, a spiritual guide for samurai warriors. Quotes from this text appear on screen throughout the film—each time, except the last, narrated by Whitaker, and every line a minimalist slice of slyly perceptive poetry, not unlike that of the working-class poet from Jarmusch’s Paterson. Serving as both chapter breaks and philosophical ruminations on the filmic action, these interludes also offer a window into the way Ghost Dog views the world. We learn the reasons behind his dangerously blind allegiance to an Italian mafioso, Louie (John Tormey), who once saved his life, as well as the mindset that allows him to carry himself in a cool, collected manner in even the most dangerous situations, since he accepts his own death as imminent.

Some lines from Hagakure even seem to speak to Jarmusch’s own approach to filmmaking, most notably: “Matters of great concern should be treated lightly. Matters of small concern should be treated seriously.” Jarmusch’s typically heightened attention to the beauty in quotidian life is very much on display throughout Ghost Dog. A small gesture that Ghost Dog makes toward a cemetery as he walks by speaks volumes about his reverence for the dead, while other moments, as when he moves his scope off a target to zoom in on a woodpecker, evince Jarmusch’s singular fusion of utter sincerity and deadpan humor. In conversations with a young, neighborhood kid, Pearline (Camille Winbush), Ghost Dog shares his affinity for the novels she’s carrying with her, and in handing her a copy of Ryūnosuke Akutagawa’s Rashomon and Other Stories, he eventually enlists his spiritual successor.

Other scenes are completely digressive, such as a poignant moment where Ghost Dog’s only friend, a French-speaking ice cream truck owner named Raymond (Isaach De Bankolé), takes him to the roof of his apartment building to admire a man on a nearby roof constructing a boat that he seemingly will never be able to get down. Despite the fact that neither Ghost Dog nor Raymond speaks the other’s language, Jarmusch highlights how life’s beautiful mysteries can be shared without the need for words—something crucial to Ghost Dog, who carries himself with a quiet, contemplative demeanor as he moves about the world like a Zen phantom.

The film’s perfunctory plot involves a hit that Ghost Dog must perform on a made man for his retainer, Louie, and the fallout that unfolds when the hitman is marked as a sacrificial lamb through which mob boss Ray Vargo (Henry Silva) covers his own tracks. Jarmusch uses this narrative not as a means to revise or comment on the mafia crime drama, but rather to bring yet another urban culture into the film’s playful assortment of pop-culture references.

The mobsters depicted in the film, with their loose morality and ineffectual management, are a stark contrast to the highly principled Ghost Dog, even if their old-school brand of criminality is understood to be as retrograde as his samurai mores. There’s a hint of melancholy to the mafia’s uncouthness as it tries to stay afloat, suggesting great athletes past their prime. But Jarmusch mainly uses the group as comic relief, infusing deadpan humor into their interactions, be it when one mobster kowtows to the landlord of the Chinese restaurant their shacked up in because they’re three months late on rent or when another mafioso confesses to his own love of hip-hop, and later dances vigorously along to Flavor Flav’s “Cold Lampin’ with Flavor.” These respites of comedy add a much-needed levity and balance to a film that’s occasionally too self-serious by half as it utilizes stillness, silence, and shot duration to emphasize the serene and restrained manner in which Ghost Dog exists in the world.

Robby Müller’s densely atmospheric and highly textured cinematography gives the film an appropriately dreamlike feel that, with its eerie blue and green hues, beautifully evokes the liminal space between life and death that Ghost Dog navigates throughout. Appropriately enough, Ghost Dog’s journey ends in a way that adds another distinct trope into the film’s mix—an old-fashioned shoot-out straight out of a western, only here between a samurai and a mobster. It’s a fitting ending, not only in its cultural mash-up and the way it foregrounds Ghost Dog’s willingness to hold true to the most burdensome of samurai codes—of being willing to die by the hands of one’s master—but in encapsulating one of the hitman’s most essential maxims: “Sometimes you got to stick to the ancient ways, the old school ways.” Even in death, Ghost Dog ensures that those ways are passed down to a younger generation, looking on and seeing their value in a world that’s mostly left them behind.

Criterion’s Blu-ray sources a new 4K digital restoration that was supervised and approved by director Jim Jarmusch. The transfer is lush, boasting a significantly sharper and more detailed image than the ones found on prior home-video releases of the film. The cool blues, greens, and grays of Robbie Muller’s deliriously moody cinematography are beautifully preserved here, as are the dilapidated textures of a late-’90s Jersey City that harkens back to the half-abandoned, early-’80s Manhattan in which Jarmusch began his career. The numerous night-time scenes benefit largely from superior black levels and a strong contrast ratio that allows for the minutest of details and a wide range of colors to remain visible in even the darkest scenes. The 5.1 surround DTS-HD master audio soundtrack is also quite impressive, with clean dialogue and a particularly robust, well-balanced mix of RZA’s music.

Criterion typically go all out on their releases of Jarmusch’s films, and this one is no exception. Jarmusch doesn’t “do” commentary tracks, and in lieu of one here, he spends nearly 90 minutes, in an audio-only Q&A, answering questions sent in by fans. Unsurprisingly, the questions vary largely in quality, but Jarmusch is quite open and direct in his responses, detailing his late-night meet-ups with RZA, strange stories from life in ’80s New York that made their way into the film, and his fondness for old cartoons. The next beefiest extra is a Zoom conversation between Forest Whitaker, Isaach De Bankolé, and film scholar Michael B. Gillespie, which focuses primarily on how the film confronts cultural clashes and develops the oddly moving friendship between Whitaker and De Bankolé’s characters.

Daniel Raim’s video essay “Flying Birds: The Music of Ghost Dog” gives RZA ample time to muse on his approach to composing his first film score and compiling a diverse range of musicians for the soundtrack. The two archival videos—one a 20-minute promo for BET, and the other an interview with Jarmusch, RZA, and Whitaker—primarily touch on things more comprehensively covered in other features. An interview with casting director Ellen Lewis is more successful in shedding light on an aspect of the film not touched upon in other supplements on the disc. Her outlining of her primarily instinctual method to casting helps to demonstrate the importance of this oft-overlooked aspect of pre-production.

The disc also comes with a brief interview with Shifu Shi Yan Ming, founder of the USA Shaolin Temple, five minutes of deleted scenes, and, most notably, the alternate isolated stereo music track, which allows viewers to listen to RZA’s still-unreleased score to the film. The package is nicely rounded out by a small booklet of quotes from Yamamoto Tsunetomo’s Hagakure and a handsome 40-page bound booklet with essays by Jonathan Rosenbaum and Greg Tate, an interview with Jarmusch, and an abundance of black-and-white stills from the film.

Criterion’s stacked release helps make the case that Ghost Dog: The Way of the Samurai is more than just an interesting curio in the career of Jim Jarmusch.