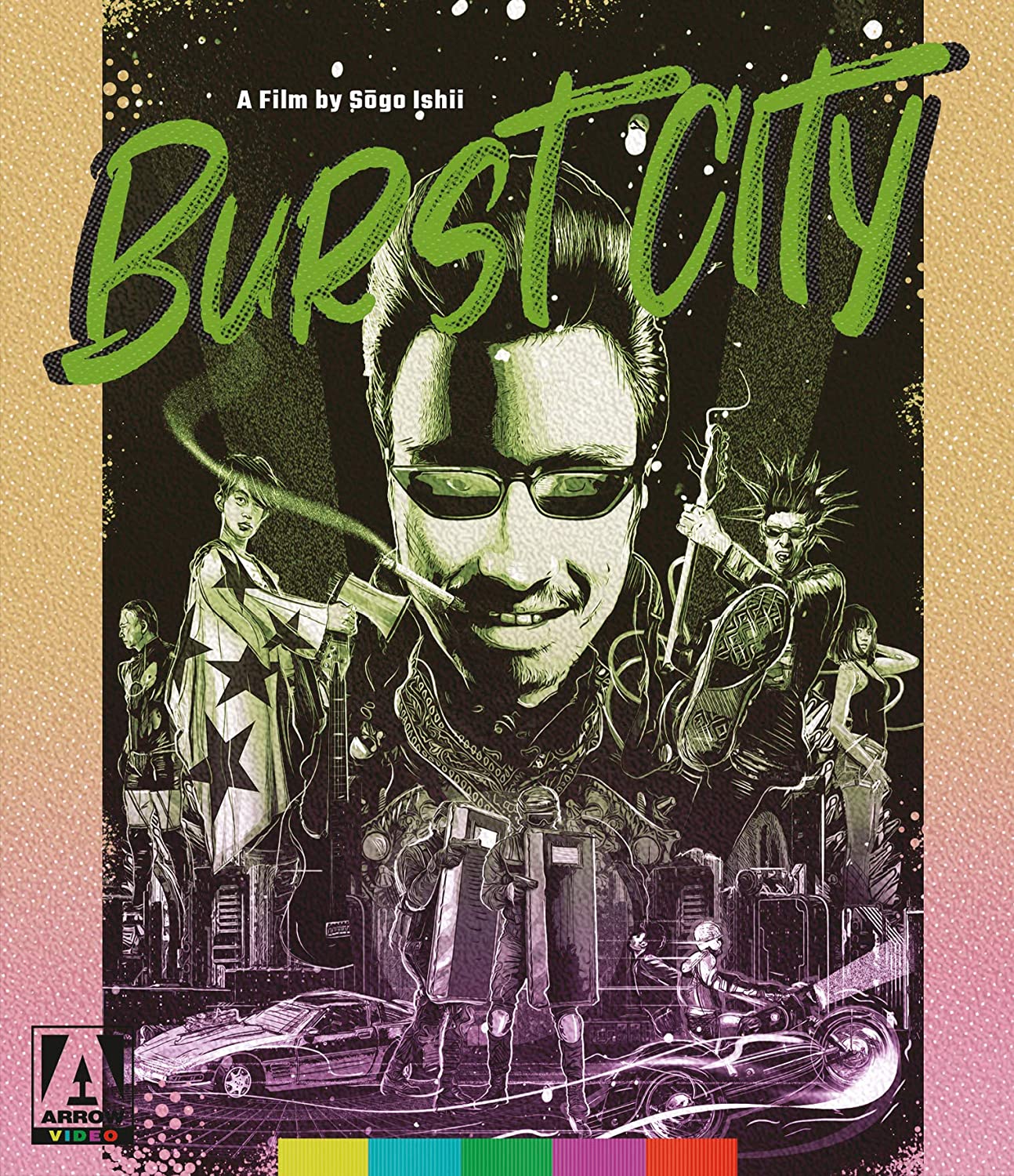 Sogo Ishii’s Burst City resolutely puts the punk into the Japanese cyberpunk movement that emerged in the early 1980s. Where the American version of cyberpunk dwells at the intersection of “high tech and low lives,” Burst City (and the movement that emerged out of it) focuses more obsessively on repurposed and recycled elements set against the backdrop of a post-industrial wasteland, and thus comes closer to Mad Max than, say, Blade Runner. This aesthetic clearly paved the way for subsequent films like Shinya Tsukamoto’s Tetsuo: The Iron Man and its sequels.

The storyline isn’t complicated, but it’s told in a such a crazy-quilt manner, with much of the connective tissue left out, that it often takes some doing to properly situate yourself. Further adding to the confusion is Ishii’s frenetic visual style, all fast cuts and disorienting angles, sometimes bordering on pure abstraction. What slowly emerges is the depiction of a fractured and fractious society dwelling on the fringes of near-future Tokyo in a shantytown slum. Various bands of punk rockers, chief among them the Battle Rockers, spend their time offstage drag racing, partying, and thumbing their noses at conventional society. A horde of mutants and quasi-cyborgs work as day laborers for a yakuza clan whose plan to construct a nuclear power plant nearby kicks in what little plot there is in Burst City.

Entangled in all this is the plight of a young prostitute whose pimp allows yakuza higher-ups to use her however they please, initiating a downward spiral of abuse and ultimately violence. The pimp’s desire to get ahead (not to mention get out) overrides his true feelings for the woman, which we only sense in a late scene where he lovingly tends to her wounds. The visual payoff to this narrative thread, a high-angle overhead shot that gazes impassively down on the emotionally wrought aftermath, is likely to linger in viewers’ minds.

In a narrative conceit that has its counterpart in postwar Japanese history, the yakuza and the police force actually conspire to implement the desires of the authorities in power: the government and fat-cat capitalists whom we never actually see represented within Burst City. In various ways, the denizens of the slum work against their own best interests. The “mutants” and cyborgs work for the yakuza. The punk rockers don’t work at all, because, in the end, work is exploitation. But opting out of the system isn’t always so easy, especially when it results in a bulldozer plowing under your favorite local music venue.

Burst City culminates with the various factions coming together in a protracted battle royale. This is easily the hardest-to-follow stretch of the film, as the most basic tenets of continuity editing go right out the window. But what it lacks in clarity, it more than makes up for in sheer bravado. At one point, the fracas literally morphs into a battle of the bands, when the Stalin (all duded up in shades of red) invade the proceedings, their lead singer lobbing pigs’ heads at the “battle police” in the audience. The resultant amalgamation of punk music, performance art, and agit-prop theatrical production is a heady mix. Burst City provides its own altogether apt full-stop punctuation: a defiantly raised fist and the rallying cry “Don’t fuck with me!”

Arrow presents Burst City in a new HD transfer prepared by Toei Studios that’s largely impressive. The film betrays its shot-on-16mm origins when it comes to managing grain levels, which can get pretty blocky in some of the nighttime and low-light settings, and there’s some intermittent speckling as well. Delineation of fine details is typically fair to middling. On the other hand, the vibrant colors and hot neon lighting in other scenes really stand out. The Japanese LPCM mono track is surprisingly effective, booming out the bass tones and ambient effects, and shoving the raucous punk-rock soundtrack right under your nose.

Japanese film expert Tom Mes delivers another laidback yet information-packed commentary. He has a lot to say about Burst City’s inception and influences (including, surprisingly enough, Bruce Springsteen), the careers of the cast and crew, and the film’s place in Sogo Ishii’s body of work. There’s also a fascinating excursus on the differences between Japanese and American varieties of cyberpunk. The half-hour interview with Yoshiharu Tezuka, who worked as lighting director on Burst City and is now a film scholar, lays out the distinction in the Japanese film industry between independent cinema (still affiliated with the studio system) and jishu eiga or “amateur films” of the late ‘70s/early ‘80s that wholeheartedly embraced the DIY aesthetic of punk rock, which sometimes entailed certain risks to life and limb. The hourlong interview with director Ishii delves into his days as a film student, how he landed a studio connection by effectively remaking his earlier film Panic High School, the financing and production history of Burst City, and his thoughts on the film today.

Sogo Ishii’s Burst City is a defiantly raised fist in the face of conventional society.