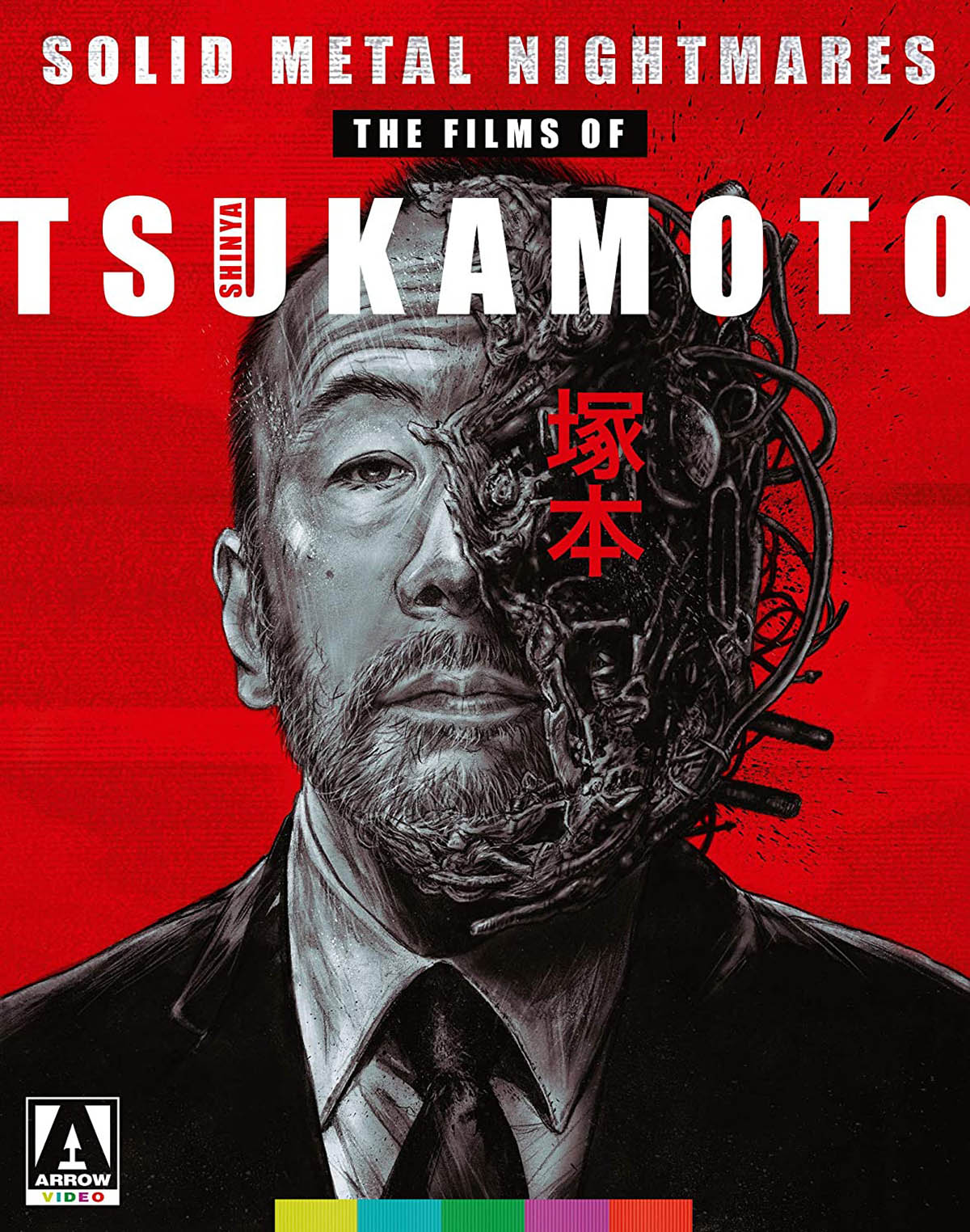 Since he first emerged on the international film scene with 1989’s Tetsuo: The Iron Man, Tsukamoto Shinya has evolved one of the most distinctive bodies of work within contemporary Japanese cinema. What’s more, he’s something of a one-man band—acting in, writing, directing, editing, and production designing his films. Arrow Video’s impressively compiled Solid Metal Nightmares: The Films of Shinya Tsukamoto contains eight feature films and two shorts, roughly half of Tsukamoto’s output over the last 30-plus years. The set provides an ideal opportunity to trace the emergence and development of the filmmaker’s key themes and visual motifs.

Though the individual surface textures of the films included in this box set may vary from, to take just one example, the harsh alienating cityscapes of his early films to some of the more bucolically inclined latter-day works, there are a few thematic constants that run like a scarlet thread throughout Tsukamoto’s filmography. There’s the ubiquitous emotional triangle (love, per se, not necessarily factoring into events), often with the focus on a strong, catalyzing woman caught between two very different men; an abiding interest in perverse, or at any rate extremely fetishistic, forms of eroticism; and a fixation on the human body, prone as it is to endless varieties of usually disturbing metamorphosis, in fraught relationship with its immediate environment.

Tetsuo: The Iron Man suggests the love child of a David Lynch and David Cronenberg film, combined with a little of Jan Švankmajer’s scrapheap stop-motion animation. The emphasis on the beauty of decay, not to mention the backdrop of a post-industrial heavy metal wasteland, could’ve been lifted straight from Lynch’s Eraserhead, while the progressive fusion of flesh and metal that Tetsuo’s nameless salaryman (Taguchi Tomorô) undergoes can be traced back to the biomechanical gun that James Woods pulls out of his gut in Cronenberg’s Videodrome. But the ultra-stylish deployment of these tropes is Tsukamoto’s own, epitomized by his razor-stropped editing techniques, set to the propulsive post-punk soundtrack of Chu Ishikawa, who went on to score most of Tsukamoto’s subsequent films.

The film’s eroticism is pronounced, starting with a round of sweaty sex between the protagonist and his girlfriend (Fujiwara Kei), followed by a surreal dream sequence where she sodomizes him with an immense serpentine strap-on, much to his chagrin. Things get even weirder in the final scenes when the wholly transformed salaryman is wooed by the “metal fetishist” (Tsukamoto) into complete bodily fusion. What emerges from their mating is a hybrid man-machine, resembling nothing so much as a giant cock rolling along abandoned Tokyo thoroughfares, as the duo promise to reduce the universe to dust and decay.

Tetsuo II: Body Hammer, from 1992, expands on the original in a number of ways. Gone is the high-contrast monochrome, traded in for full-color film stock that brings out the blues and grays of the modern and more prominently featured Tokyo cityscape. The cast has also been expanded from the central trio—here configured as two brothers (Taguchi and Tsukamoto) and one of their wives (Kanaoka Nobu)—to include a mad scientist (Utazawa Torauemon) and a pair of thyroidal weightlifting skinheads (Tezuka Hideaki and Asada Tomoo). And this time around the male leads are given something of a backstory involving childhood trauma and amnesia. When the repressed memory is finally recovered, it yields Body Hammer’s one real fetishistic flourish: an act of simulated fellatio, playing on that old gun-equals-penis metaphorical chestnut, that turns suddenly and gruesomely mind-blowing. Where the first film concluded with homo-eroticized destructiveness, the sequel proffers the reinstitution of the nuclear family, albeit against a backdrop of utter devastation.

Tokyo Fist, from 1995, begins by opposing Tsuda (Tsukamoto), another stereotypical salaryman, and his former schoolfriend, Kojima (Tsukamoto Kôji), who’s now a professional boxer. At first, the juxtaposition between the two types is clear-cut, but as the film progresses, and Tsuda takes up amateur boxing, Tsukamoto effectively blurs the boundaries between the two. At the same time, Tsuda’s fiancé, Hizuru (Fujii Kahori), explores radical body modification through tattooing and inserting metal rods into her flesh—in an obvious callback to the Tetsuo films. Tokyo Fist is Tsukamoto’s Raging Bull, where the body (especially the human face) does penance through its transformation into raw meat.

With its tale of a bereft loner out to score a gun and then some payback, 1998’s Bullet Ballet openly invokes another Martin Scorsese film: Taxi Driver. But Tsukamoto ultimately takes the film in a completely unexpected direction, teaming up his version of “God’s Lonely Man” (Tsukamoto) with a youth gang whose members, at first, seems to spend most of their free time kicking the shit out of him. What slowly emerges in an idiosyncratic spin on Taxi Driver’s notion of the generation gap, with the older man trying to save misguided youth from themselves. But, for Tsukamoto, age and experience only count for so much. Mostly it means you’re more proficient at coldly blowing away your competition.

A Snake of June, from 2002, is one of Tsukamoto’s most radical productions. It’s also his most flagrantly fetishistic. The setup is more or less straightforward, in keeping with your average Japanese pink film: Shutterbug and voyeur Iguchi (Tsukamoto) blackmails a neglected housewife, Rinko (Kurosawa Asuka), into some very public displays of exhibitionism. But about halfway through the script flips, and the timeframe alters, going back over events from the POV of Rinko’s husband, Shigehiko (Kôtari Yûji). Then, in its final act, the film shifts gears again into a surreal conflation of all three viewpoints, where time and place seem to come unmoored. Whatever exactly transpires, the film ends with Tsukamoto’s most unambiguous embrace of the married couple as a desiring machine geared for mutual gratification.

Where most of Tsukamoto’s earlier films had been concerned with acquiring self-knowledge through the process of transformation, 2004’s Vital explores techniques of stripping away as a means to wisdom and existential acceptance. Suffering amnesia as the result of a car crash that killed his girlfriend, medical student Hiroshi (Asano Tadanobu) discovers that the body currently on his dissecting table belongs to her. The film suggests that Hiroshi’s recollection of his relationship with Ryôko (Tsukamoto Nami) increases the deeper he delves into her innards. Of course, this being a Tsukamoto film, Hiroshi is at the same time engaged in a sadomasochistic relationship with straight-A student Ikumi (Kiki) that involves erotic asphyxiation. The film’s final images are a memory of nature’s verdant glory. But trying to decode precisely whose memory it is gives the ending the perfect note of ambiguity.

Suggesting a distaff spin on Fight Club, 2011’s Kotoko uses Tsukamoto’s disorienting editing techniques to put us squarely inside the headspace of the title character (Cocco), who suffers from schizoid visions of aggressive doppelgangers. Despite this description, the film plays for long stretches as a demented romantic comedy, after Kotoko meets famed novelist Seitaro Tanaka (Tsukamoto). Not surprisingly, their relationship consists of her plunging forks into Seitaro’s hands and beating him to a bloody pulp, for which he seems genuinely grateful. But when this regimen has her feeling whole again, Seitaro picks up and leaves (it’s implied that he’s only interested in her so long as she’s sick). Both Kotoko and the film soon spiral downward into one of Tsukamoto’s most heartbreaking final scenes.

Killing, from 2018, is a gory exercise in turning the conventions of the samurai film against themselves. There’s no glory or honor to be found anywhere in this tale of an older samurai, Sawamura (Tsukamoto), recruiting a younger man, Mokunoshin (Ikematsu Sosuke), to go off and fight for their kind in the imperial city of Edo. Rather than Akira Kurosawa, Killing is closer to Harold Pinter in its free-floating air of menace, and Samuel Beckett in its sense of utter stasis, since Sawamura and Mokunoshin never quite manage to leave the small farming village where the film is set. In Vital, the wonders of the natural world imparted a sense of pastoral calm and forbearance. But in Killing, nature is impassive, indifferent—a green world that only serves all the better to set off those prodigious gouts of arterial spray.

There’s little information about source materials in the set’s accompanying book, other than the bald disclaimer: “HD transfers provided by the Nikkatsu Corporation.” Luckily, the films collected here look excellent overall, certainly several noticeable steps above previous DVD releases. There are only two relatively minor caveats: A Snake of June displays some persistent distortion at the top and/or bottom of the frame, and the SD video origins of Haze (not to mention its murky lighting schemes) leave the transfer looking noisier than usual. The films are all provided with Master Audio tracks that range from mono to 5.1 surround, all of which do fine by the films’ percussive sound design and evocative scores from Chu Ishikawa, which run the musical gamut in style from hardcore industrial to synth-heavy prog rock.

Packed inside the slipcase for Solid Metal Nightmares: The Films of Shinya Tsukamoto alongside the four individual jewel cases is a double-sided, foldout poster with newly commissioned cover art on one side and fresh artwork for Tetsuo: The Iron Man on the other. There’s also a nicely illustrated hardcover book with typically incisive essays from Kat Ellinger and Jasper Sharp on certain overarching aspects of Tsukamoto’s filmography.

All 10 films come with commentary tracks from Tom Mes, who literally wrote the book on Tsukamoto’s films: 2005’s Iron Man: The Cinema of Shinya Tsukamoto. The tracks were recorded chronologically, as Mes often points out, making it all the easier to track the development of (as well as variations on) some of the filmmaker’s predominant visual motifs and thematic preoccupations. Not surprisingly, Mes is deeply versed in all things Tsukamoto, and delivers his comments in a low-key, occasionally humorous style.

Jasper Sharp’s visual essay “An Assault on the Senses” lays the groundwork for an appreciation of Tsukamoto’s themes and techniques. Extensive archival interviews with Tsukamoto cover all the films, including one from earlier this year that spans his entire career. He remains a perceptive explicator of his own work, touching on aspects of his life and filmmaking from early childhood fears to his unabashed love of celluloid as a medium. Finally, there are archival behind-the-scenes featurettes for A Snake of June, Vital, and Haze, as well as the requisite trailers, image galleries, and even some music videos.

Arrow Video’s impeccable box set allows you to follow the development of one of contemporary Japanese cinema’s true visionaries.