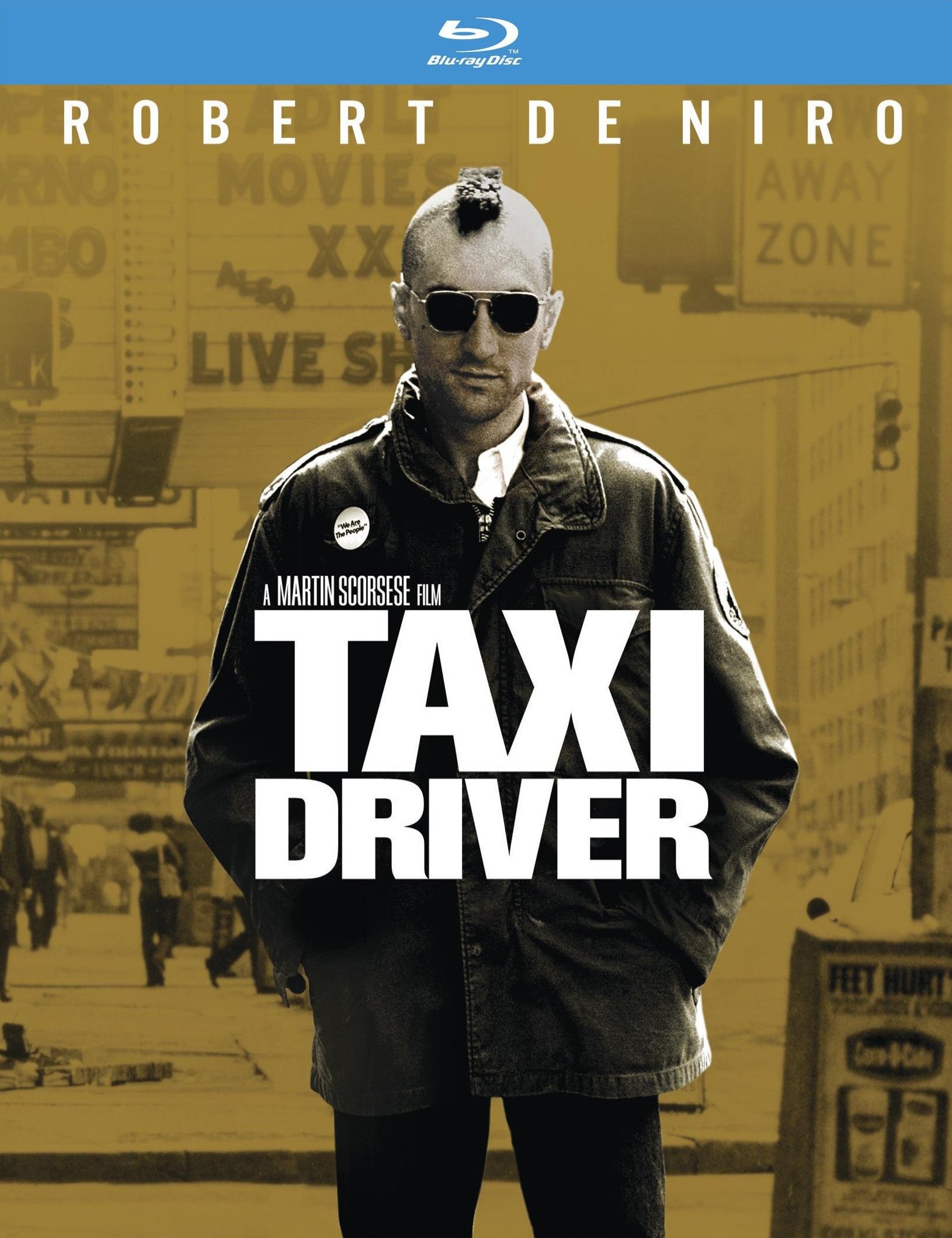 “He’s a prophet and a pusher, partly truth, partly fiction, a walking contradiction.” The quoted lyrics of a Kris Kristofferson song might be the most spot-on observation in all of Taxi Driver, and it’s telling that it’s also one of the few moments during which the film manages, however slightly, to wrestle the perspective away from Robert De Niro’s titular character, Travis Bickle. From the fog-soaked, fire-and-brimstone opening credits on, Martin Scorsese’s landmark film is an exercise in immersive subjectivity, creating a rotten underbelly of a world as seen through the eyes of an angry, uneducated, and sexually disturbed man with a violent and mysterious past (the scar on his face and military service, from which he was honorably discharged, are acknowledged but never explained) and an even more violent future.

Travis drives a cab nights because he can’t sleep anyway; mostly, the occupation allows him to fuel his anger at society, the drug and sex obsessed street culture he abhors but can’t bring himself to look away from. He hates sex but spends his free time at porno theaters; he despises druggies but uses speed. Almost hermetically sealed off from the outside world, his angst builds to an apex of horror long since divorced from whatever injustices first rattled his cage. Bickle doesn’t talk much to the outside world (it so rarely cares what he has to say), but he talks a lot to himself, and the film acts much like a living diary. His stream-of-consciousness voiceover is vital in making the character credible, even relatable, but Taxi Driver doesn’t ask that we embrace or approve of his disturbed worldview, only that we see through his eyes enough to experience this particular circle of hell.

With Travis’s streaks of implied racism, less hateful than incidental, and attempted chivalry, the film is indebted to John Ford’s The Searchers, but Travis’s misanthropic anger is a decidedly modern beast born of neon lights and the demons of a post-Vietnam culture. His rebellion is without a cause, but his fury is nothing if not bibilical. Scorsese’s arsenal of cinematic devices—slow-motion shots, jarring editing choices, oversatured lighting schemes, and self-conscious tracking shots, to name a few—serve as both an intoxicating portal into Travis’s mindset as well as a fully absorbed utilization of Scorsese’s cinematic influences (it’s no wonder Quentin Tarantino, whose performance in Pulp Fiction pays homage to Scorsese’s own expletive-filled cameo here, has often named the film his favorite).

Hitchcockian unease permeates the film, but so too does a Godardian use of space and a Bressonian focus on obsession heighten the mounting sense of dread. These elements are groovy for film buffs but are mere icing on the proverbial cake; you don’t need to be in the know to relish Scorsese’s mastery of the form, and what may astonish even more than the creative prowess is how compulsively entertaining the results are. It may yet be his finest film, while the character of Travis is quite arguably the most enduring creation to be found in the collective works of Scorsese, De Niro, and screenwriter Paul Schrader, with whom Scorsese would eventually collaborate on a handful of additional masterpieces.

Bernard Herrmann’s swan song—a jazzy score equal parts quixotic and apocalyptic, completed a day before the composer’s death—is at least as vital to Taxi Driver as De Niro’s haunted, haunting eyes and Scorsese’s roving kino eye. A God’s-eye-view motif builds to a crescendo in the film’s blood-soaked finale (a sequence that initially earned the film an X rating; these sequences were color-adjusted so as to make the red look brown, thus securing the marketable R), in which Travis’s failed death wish instead sees him become a local hero of sorts.

Scorsese contrasts Bickle’s feverish perspective with the normalcy of well-adjusted office life and cab driver camaraderie, but he doesn’t let society entirely off the hook either; the politics of the day that see Travis’s ultimate glorification could just have easily seen his demonization—as in his botched assassination attempt of a presidential candidate. One needn’t look far to see the film’s extensive influence on a dystopian-obsessed culture (Tyler Durden and Rorschach both echo the blueprint established here when they aren’t quoting it outright), and Taxi Driver is at least as much a passively incendiary commentary on American media as it is a tortured character study. If anything, the film is even more relevant today; the names and places may change, but the fuel of Travis’s anger remains. As suggested by the enigmatic final shot, these cycles of violence are self-perpetuating and doomed to repeat themselves if left unchecked, something that seems an unfortunate given now more than ever. Travis Bickle is God’s lonely man, but at the end of the day, aren’t we all?

For those of us who grew up watching Taxi Driver on VHS and DVD, heretofore unrecognizable details make this disc the next best thing to seeing an actual print of the film. The filth of New York’s underbelly practically leaps off the screen, and though the transfer maintains the grainy rawness of Michael Chapman’s cinematography with agonizing precision, the near-perfect quality of the image suggests nothing less than a freshly minted reel. Sound is similarly pristine; you may feel as if you’re listening to Bernard Herrmann’s swan song for the first time all over again.

Exhaustive. Carried over from the previous DVD release are two feature commentaries: One by screenwriter Paul Schrader, and one by film professor Robert Kolker (Schrader’s is the more satisfying of the two, if only because it’s more personal than Kolker’s academic approach), but the crown jewel of the set is easily the Scorsese/Schrader commentary recorded for the Criterion Collection in 1986. (Spanish and Portuguese subtitles are also available for the commentary tracks.) Two features allow interactive movie watching: An interactive “Script to Screen” feature, in which the film is seen with the screenplay in sync, and, if your player is online, MovieIQ, which allows you to access information about the film, cast, and crew during playback of the movie. A plethora of featurettes follow (“Martin Scorsese on Taxi Driver,” “Producing Taxi Driver,” “God’s Lonely Man,” “Influence and Appreciation: A Martin Scorsese Tribute,” “Travis’ New York”), and though they largely avoid the talking-head filler that takes up a lot of special features, they’re mostly redundant after the commentaries. Meatier is the 70-minute “Making Taxi Driver,” also a rollover from earlier DVD releases. More interesting is “Taxi Driver Stories,” a collection of interviews with cabbies from 1970s New York (most interesting fact: a 1970s taxi-driver license test consisted of 10 questions, whereas current drivers must first pass an 80-hour course). “Travis’ New York Locations” juxtaposes nine locations from the film with their 2006 counterparts. Rounding out the disc is a comparison of the film and Scorsese’s original storyboards, a series of galleries set to music and dialogue from the film, and the preview for the 2007 DVD release of the film, which plays like some kind of atrocious fan attempt at a Daft Punk music video. Finally, inside the packaging is a set of 12 cards featuring movie artwork and production photos.

A high-water mark of American cinema gets its due treatment on this luxurious disc. No respectable collection should go without it.