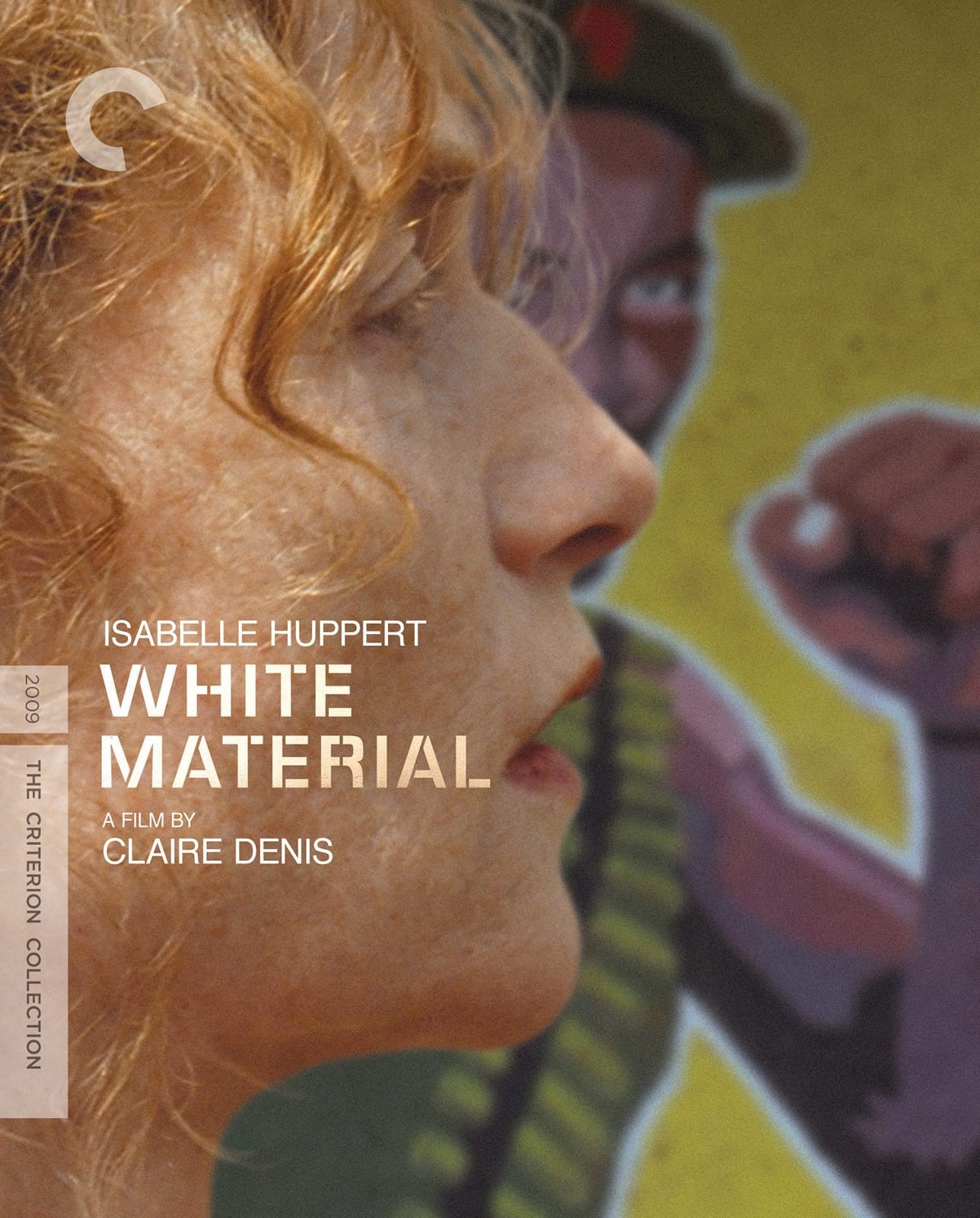 Claire Denis’s White Material captures the precise moment before a colonialist Band-Aid is completely ripped from the festering wound of an unnamed African country stricken by decades of inequality. No character, white or black, escapes the stinging aftershocks of this violent transition. Through the subjective gaze of white coffee-plantation owner Maria Vial (Isabelle Huppert), a delusional woman desperately clinging to her place in the social spectrum despite the growing unrest, Denis methodically spins a slow-motion carousel of fragmentation and disorientation.

Every frame resonates with uncertainty, puncturing the film’s diverging narrative template with striking ellipses and gaps. The disjointed structure drives White Material further into the realm of visceral nightmare, where pristine moments of silence complement the stunning original music by Tindersticks, a series of aching requiems drifting through the wind in the trees like ghosts of yore. Most importantly, time slows down at an increasing rate in White Material, until a once dominant way of life is completely frozen in time, an artifact rather than an institution.

As a result, White Material is a museum of expiring breaths. Denis obsesses over the way framing and camera movement combat each other, and this extreme stylization contextualizes her thematic mission statement about violent transition. Even if the landscape of White Material is visually cohesive and sublime, it’s always perforated, an examination of a moment in time when white and black overlap into an increasingly dangerous grey mosaic.

A primitive tonal angst sweeps through the film, injecting similar reactions of desperation into all three main white characters. Maria tries to retain her family’s status quo, gathering workers from a nearby village to help bring in the latest coffee crop. Her ex-husband, Andre (Christophe Lambert), unsuccessfully tries to convince Maria to evacuate, while their teenage son Manuel (Nicolas Duvauchelle) shaves his head and literally gets consumed by the collective madness. This triangle figuratively splinters in three distinct directions, each failing to reclaim some part of a personal fantasy that no longer exists.

While the ornate objects of the coffee plantation define the Vial’s fledgling existence (and in some ways their sense of salvation), the black characters destroy this façade by breaching the space’s hallowed borders. Whether it’s curiosity (like the two child soldiers) or necessity (Isaach De Bankolé’s mortally wounded rebel leader, Boxer), these invasions brilliantly subvert the Vial’s privileged way of life, not to mention the collective idea of white safety and protection. As White Material grows more intense, this complex overlap of identities becomes more apparent to the Vial’s. Maria sees one of her necklaces around a gun-toting woman right before the female soldier shoots someone at point-blank range. A machete-wielding child calls Manuel “Yellow Dog,” comparing him to a small trinket stolen from the plantation earlier in the film while caressing his neck with the blade.

Visually, characters are often shot from behind in White Material, the camera lingering on incomplete pictures of their profiles. Skin, both black and white, becomes so essential to the narrative disintegration, but it’s also Denis’s core way of tracking characters through densely layered spaces. Manuel is shirtless for most of the film, his elaborate tattoos representing individuality he can never find. Later, his foot is sliced by a sharp rock, the blood merging with the dirt on his skin. Later, a young black girl is seen sitting in the doorstep, a Café Vial covering her back. Later, Maria’s pale skin and popping freckles define a momentary sense of freedom, most notably when she drives a motorbike down a dusty road, cinematographer Yves Cape’s camera finding the perfect moment when her hands raise into the air. It’s the only time Maria seems to take a breath.

But this is a faux freedom, a make-believe gesture that represents Maria’s connection with her own, specified vision of Africa out of touch with the angry point of view looking back at her. The black experience, something always on the periphery, fumes with increasing resentment and rage, and Denis cuts away from the Vial’s to the squadron of child soldiers wreaking havoc around the country, and to the supporting black characters dealing with the revolution in various ways. A multitude of signs, banners, and transistor radios are also vital to the way Denis constructs her fracturing mise-en-scène. The Boxer comes across a church with a sign that says “God Doesn’t Give Up” only to find the priest inside riddled with bullet holes. The constant commentary communicated via the radio solidifies the Vial’s collapse. “As for the white material, the party’s over,” the disc jockey happily says, right before he’s killed by government soldiers. Denis is smart enough to make these haunting moments socio-political statements instead of simply racial in nature.

Finally, deep-seated alienation drifts under the physical violence and visual poetry of White Material, a sudden disruption of identity that transcends nation-building and violent aggression. Denis asks a pertinent question of her characters and themes: How do we react when the infrastructure of our defining ideologies is no longer relevant or sustainable? Maria’s final descent into physical violence, an act of scathing anger set within the smoldering confines of the hollowed out plantation, feels like an exclamation point to this question. But chopping off the head of colonialism doesn’t necessarily solve anything in White Material. It just leaves Maria adrift in her own madness. Denis’s brilliantly lyrical final shot ponders whether or not such a response inspires change, or simply creates more snakes in the grass. Denis wants this thematic ambiguity to rise up for all to see, like the thick smoke from Café Vial billowing into the cloudy blue sky.

More so than any other modern cinematic canon, the films of Claire Denis must be seen on the big screen. Her mastery of the visual frame, sound design, and elliptical pacing make the theatrical experience almost religious in nature. While Criterion’s 1080p Blu-ray transfer of White Material is gorgeous, the film’s powerful impact doesn’t translate well on the small screen. Denis puts an unmatched level of detail into every moment, but the nuances become harder to consume on Blu-ray than on the all-encompassing theatrical format. The ghostly quality of the Tindersticks score melds into the background as opposed to being front-and-center, while the booming bursts of diagetic sound often lack the necessary dimension. White Material is a must-own for those that have seen the film, but I still recommend seeing it projected theatrically (if possible) to experience the full sensory assault Denis intended.

“The light in Africa is not very forgiving on white skin.” Denis might be talking about her time in Cameroon shooting White Material, but this statement has many layers of meaning. The fantastic interview with Denis on the White Material Blu-ray disc is especially revealing, as Denis talks about working with Isabelle Huppert, co-writer Marie N’Diaye, and DP Yves Cape for the first time and how all these master artists equally contributed. Denis admits the crew had equipment held up at customs, forcing Cape to depend on natural light and little to no make up for Huppert. After watching this interview, I could listen to Denis talk shop for hours. The other two interviews, with Huppert and Isaach De Bankolé, are equally enjoyable, if not nearly as in depth. Also, the disc includes an unnecessary deleted scene that gives the film’s ending too much closure, a short film Denis made during the disastrous White Material premiere at the Ecrans Noir Film Festival in Cameroon, and a theatrical trailer. Noticeably absent is any audio commentary by Denis, which would have been amazing I’m sure. Finally, critic Amy Taubin contributes a must-read essay to the supplemental booklet.