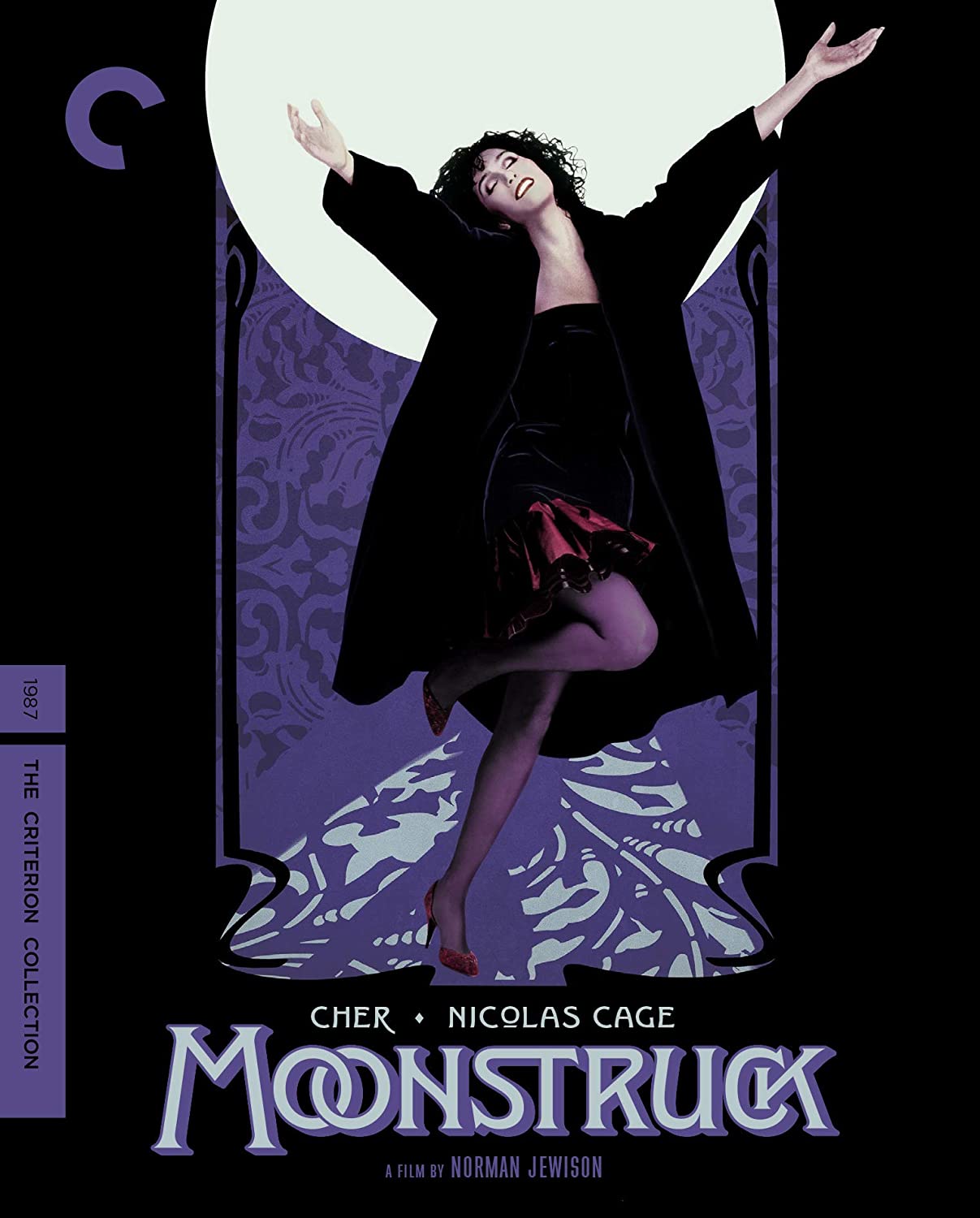 Norman Jewison’s Moonstruck takes place in a dreamy, hyperreal version of New York City where everyone is at once bizarre and utterly relatable. It could perhaps best be described as a screwball comedy in which the characters have to confront the emotional fallout of their amorous antics. Imagine if Leo McCarey, instead of making the tonally opposite Make Way for Tomorrow and The Awful Truth in the same year, somehow managed to create one film that combined their unique sensibilities into a busy farce grounded by a poignant, almost unbearable earnestness.

Moonstruck tracks several romantic entanglements centered around Loretta (Cher), a 37-year-old widow living in Brooklyn Heights who blames her husband’s untimely death on the bad luck brought on by her decision to defy the customs of marriage. Her particular kind of anxiety is established early when her boyfriend, Johnny (Danny Aiello), proposes to her in a restaurant. Attempting passionately to talk him out of it due to her perceived ill fortune, Loretta nonetheless makes him get down on one knee, and both she and the other patrons look put out that he didn’t think ahead to get a ring.

Playwright John Patrick Shanley, then a rising star in the theater world, wrote the film on spec, and his script rings with a curiosity for his characters that goes beyond merely establishing and resolving their conflicts. He plays up Loretta’s self-defeating neuroticism, but both he and Cher make abundantly clear that the woman is no one’s fool; Cher immediately communicates how Loretta is the controlling force in her relationship with Johnny, and in general the character exudes a competence and self-sufficiency that clarifies her crippling superstition as amusingly incongruous rather than a sign of emotional weakness. When Johnny leaves for Sicily soon after proposing to be with his terminally ill mother, we see how little the relationship matters to Loretta when he calls and announces, “I’m calling from the deathbed of my mother,” and all that she can say to him is: “Well, how was your plane ride?”

Surrounding Loretta are figures facing their own romantic pangs and troubles. Her father, Cosmo (Vincent Gardenia), also believes in his daughter’s bad luck and warns her against marriage, which probably explains why he’s having an affair. His animated flippancy contrasts sharply with the sullen, withdrawn nature of Loretta’s mother, Rose (Olympia Dukakis), who knows of her husband’s infidelity and is nearly catatonic from sorrow over it. She approves of her child’s marriage to a man she likes but doesn’t love precisely because it lowers Loretta’s chances of having her heart broken. Even peripheral figures in the film, like an old Italian woman who curses the plane Johnny takes to Sicily because it’s carrying the woman who stole her lover 50 years ago, come to feel like reflections of Loretta’s anxieties and desires.

Things take a turn when Loretta decides to invite Johnny’s estranged brother, Ronny (Nicolas Cage), to her wedding. Arguably, no role has ever benefited more from Cage’s full-throated commitment to his work than Ronny. On paper, the character, a one-handed baker who blames his brother for his affliction and who harbors a love for opera that contrasts with his almost Dickensian working-class image, is so wild that he practically demands to be played with quirky self-awareness. But Cage meets the character on his emotional wavelength, rendering the man’s pain with such melodramatic anguish that the walls between tragedy and comedy break down, and it’s a small wonder that the man’s passion so rattles Loretta’s carefully maintained sense of order that she very quickly ends up in bed with him.

The remainder of the film traces the various trysts of the major characters, leading to a bravura sequence in which Loretta, after accompanying Ronny to a performance of La Bohème at the Met, is moved to tears by the performance, only to run into her father on a date with his mistress (Anita Gillette), while far away, Rose contemplates an affair of her own with a professor (John Mahoney). Characters conducting their illicit activities keep running into people they know, as if even a city as vast as New York were too small to hide secrets. Though shot on location throughout the city, the film sometimes resembles the fake, soundstage vision of New York that Stanley Kubrick crafted for Eyes Wide Shut, albeit one defined not by erotic paranoia but a more relatable sense of longing and apprehension.

Ultimately, Moonstruck is a comedy of remarriage, for some parties more literally than others. Rooted in a fear of mortality and growing apart, it finds affirmation in the relationships that seem most strained. The film is perhaps most succinctly summarized in an early scene where Loretta witnesses an argument between an old couple who run a liquor store. The woman, accusing her husband of ogling other ladies, calls him a wolf, badgering him at length for his wandering eye. Just when it seems she might lunge for the man’s throat, he calmly replies, “You know what I see in you? The woman I married,” which causes her to melt, and the energy of the moment is so contagious that Loretta leaves the store with a wide smile on her face.

Criterion’s Blu-ray boasts a transfer from a 4K restoration that highlights the film’s subtle beauty. Nighttime shots show no visible crushing artifacts, while the neon lights of shops and restaurants glow intensely. Grain is visible and balanced throughout, and skin tones are natural and textured. The soundtrack deftly separates the bustle of New York from the dialogue, preserving the clarity of the latter while adding to the film’s sense of intensity.

Contemporary interviews with the cast and crew hammer home what a sensation Moonstruck was upon its release, while retrospective interviews with John Patrick Shanley and Danny Aiello attest to its enduring relevance. Two documentaries from 2006, the making-of program “At the Heart of an Italian Family” and the more focused “The Music of Moonstruck,” delve further into the production and how the film’s grounded yet melodramatic atmosphere was achieved. Scholar Stefano Albertini talks more about the use of opera as a thematic and stylistic backdrop, while the most significant extra is a 1998 commentary with Cher, Norman Jewison, and Shanley that covers a range of topics, from how the opening montage was originally set to La Bohème instead of “That’s Amore” and gave the film a too-“artsy” feel, to amusing anecdotes about Cher getting legitimately drunk in one scene because they used real champagne. Critic Emily VanDerWerff also contributes a wide-ranging essay that touches upon the careers of Moonstruck’s principal cast and crew as well as the many overt and subtle flourishes that make the film so unique.

Norman Jewison’s sublime romantic comedy gets a handsome home-video package from Criterion, boasting an excellent transfer and a meaty collection of new and old extras.