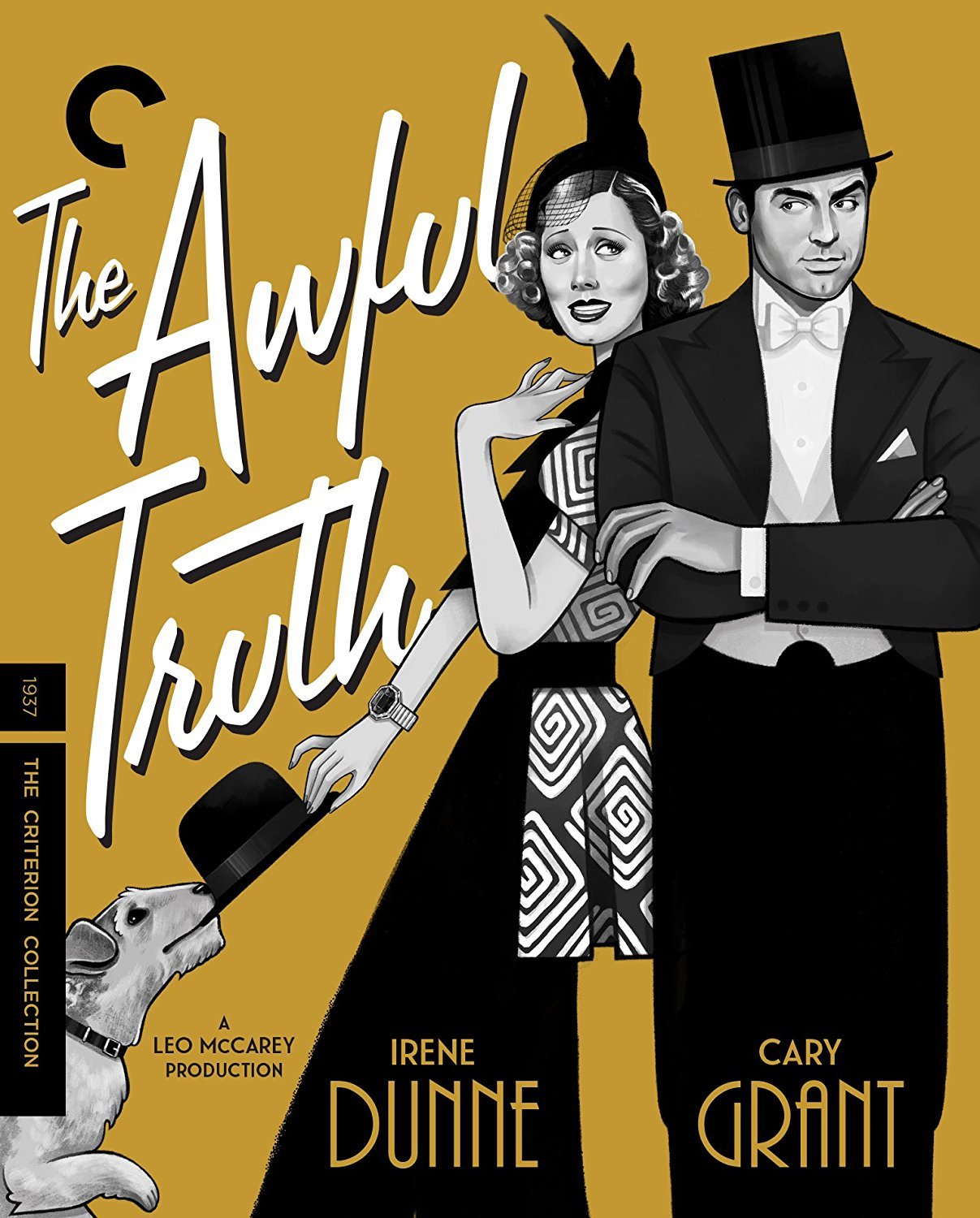 At its broadest, Leo McCarey’s classic American screwball comedy The Awful Truth concerns a single fight between a couple that reaches elegantly epic proportions. Lucy (Irene Dunne) and Jerry (Cary Grant) suspect one another of infidelity, agree to divorce, and proceed to wrap friends and lovers up in a series of nesting roleplays that allow them to work through their resentments. Like many comedies of remarriage, The Awful Truth never suggests that its central couple won’t reconcile—because if suspense were to truly enter the equation, the film’s delicate emotional soufflé might collapse, ruining the high sense of suggestion with the explicitness of consequences.

“Screwball” has evolved into a misleading term for this genre of film. For modern audiences, such a word might suggest the oafishness or obviousness that’s now common of American comedy. In reality, classic screwball comedies of the 1930s and ‘40s are unapologetic models of refinement and code—but not just any sort of refinement. Growing too pretentious, or being born into old money, relegates one to villain status in a screwball comedy, even if the heroes appear to have lifestyles nearly as privileged. The difference is that the protagonists of such films wear their wealth and style lightly, possessing a spunk and insecurity that renders them relatable and allows them to hover almost outside of the class strictures that govern supporting characters. (There’s a hypocrisy to this empathetic sleight of hand about which the screwball comedy is decidedly unresolved.)

The romantic fantasy of The Awful Truth hinges on Lucy and Jerry’s realization that their relationship might be indestructible. Their impending divorce coaxes out the similarities that initially brought them together—namely their advanced capacity for acting and joking. A significant element of this genre’s stylishness resides in how it reduces heartbreak to insignificant fodder for playtime. Imagine being suave and continental enough to play-act with the lover who might’ve cheated on you; this is a pleasure of invincibility, of implicit rebirth and sexual openness, of which precious few of us know. Screwball comedies turn their characters into players within plays within the larger framework of the films, blurring lines between actors and characters. The Awful Truth is a perfect farce, devoid of any fat, in which Lucy and Jerry’s fantasies and schemes topple after one another like figurative dominoes.

The film’s second act is a particular marvel, in which the misunderstanding that’s imperiled Lucy and Jerry’s marriage—he suspects that she’s sleeping with her music teacher, Armand Duvalle (Alexander D’Arcy), though no one in a film such as this would ever come out and say that—is revisited over and over until reaching a breaking point. This act is composed of four major linking sequences, with evolving and overlapping motifs, and each functions as a self-contained set piece while leading cumulatively to the dismissal of Lucy’s new fiancée, a wealthy oil rancher named Dan (Ralph Bellamy), and to the misleading physicalizing of Jerry’s nightmare of catching Lucy with Armand.

Many of the film’s punchlines merge social and emotional innuendo, physical comedy, and often neurotic sexual symbolism. The Awful Truth is but a tonal tweak away from sliding into the obsessively curdled territory of later Grant thrillers. A bit in which Jerry tries on Armand’s hat and finds it too big for him, for instance, is implicitly obscene and humiliating. The film is a fleet and svelte romantic daydream, driven by McCarey’s remarkable pacing and visual lucidity, and by Grant and Dunne’s performances.

The Awful Truth is also remembered for being the film in which Grant, under McCarey’s tutelage, perfected his iconic idealization of male style and vulnerability. No other actor has managed to be so intoxicatingly attractive while looking so poignant and foolish. When Jerry tumbles in a chair while spying on Lucy’s recital, Grant turns a moment of sublime physical comedy into a sly testament to Jerry’s ease and flexibility, weathering embarrassment like a gentleman with a sense of the absurd. Jerry’s an archetypal Grant creation: a beguiling mixture of fuddy-duddy and player, with a wild streak of bitterness that would be more explicitly mined by Alfred Hitchcock. (Grant is a master of the backhanded compliment, and Jerry’s ironic praise of Lucy retrospectively anticipates the actor’s most disturbing scenes in Notorious.)

Until the third act, when Lucy turns the tables on Jerry and enacts an uproarious revenge, Dunne has a trickier role than Grant, often playing defense. Dunne communicates Lucy’s inventiveness—and sense of being under a perpetual siege of male judgment and pursuit—via a series of subtle physical cues and inflections. Dunne’s delivery of a line in which she implores Jerry to defend her honor to Dan is hauntingly tossed off in a faux-cow-poke manner that expresses resentment for both men in a matter of microseconds. Lucy’s erotic smile when Jerry collapses at the recital, followed by the laugh she mixes into the song she’s singing, suggest gloriously ineffable in-jokes.

Grant and Dunne forge a subliminal language, performing a series of riffs that indicate the many private things that we will never learn about this or any other couple. The Awful Truth is one of the great American comedies, but it’s also a mighty and mysterious film about relationships, which are composed of nesting negotiations—performances—that leave scars.

This new digital restoration boasts healthy and attractive grain, with stunning foreground and background clarity as well as lush blacks and sturdy whites. Image textures are also notably more vivid than in prior editions of the film, with Cary Grant and Irene Dunne’s clothing particularly popping off the screen. Facial details are also extraordinary, especially in close-ups. The new monaural soundtrack has been clearly scrubbed of the blemishes that are typical to older soundtracks, informing the film with a newfound sense of immersion and liveliness. This is a beautifully robust presentation.

A new video essay by filmmaker and critic David Cairns uses footage from Cary Grant’s early performances to illustrate how the actor painstakingly assembled his classic persona. Cairns refutes the myth of stars as merging fully formed out of nowhere, and poignantly highlights Grant’s eagerness to mold greatness out of his humble beginnings as Archibald Leach. McCarey was key in the formation of Grant’s acting style, and Cairns illustrates how the director encouraged the actor to rely on his physicality and verbal invention, often with improvisation that freed Grant of his self-consciousness. A new interview with jazz and film critic Gary Giddins focuses more exclusively on Leo McCarey’s working methods. Astonishingly, much of The Awful Truth, a model of narrative construction, was made up by McCarey and the actors on the spot, which particularly angered Grant and Bellamy. There’s also a short archival interview from 1978 with Irene Dunne, who enjoyed McCarey’s free-associative techniques, and a Lux Radio Theatre adaptation of the film from 1939 starring Grant and Claudette Colbert. Rounding out the somewhat slim package is a sharp essay by film critic Molly Haskell.