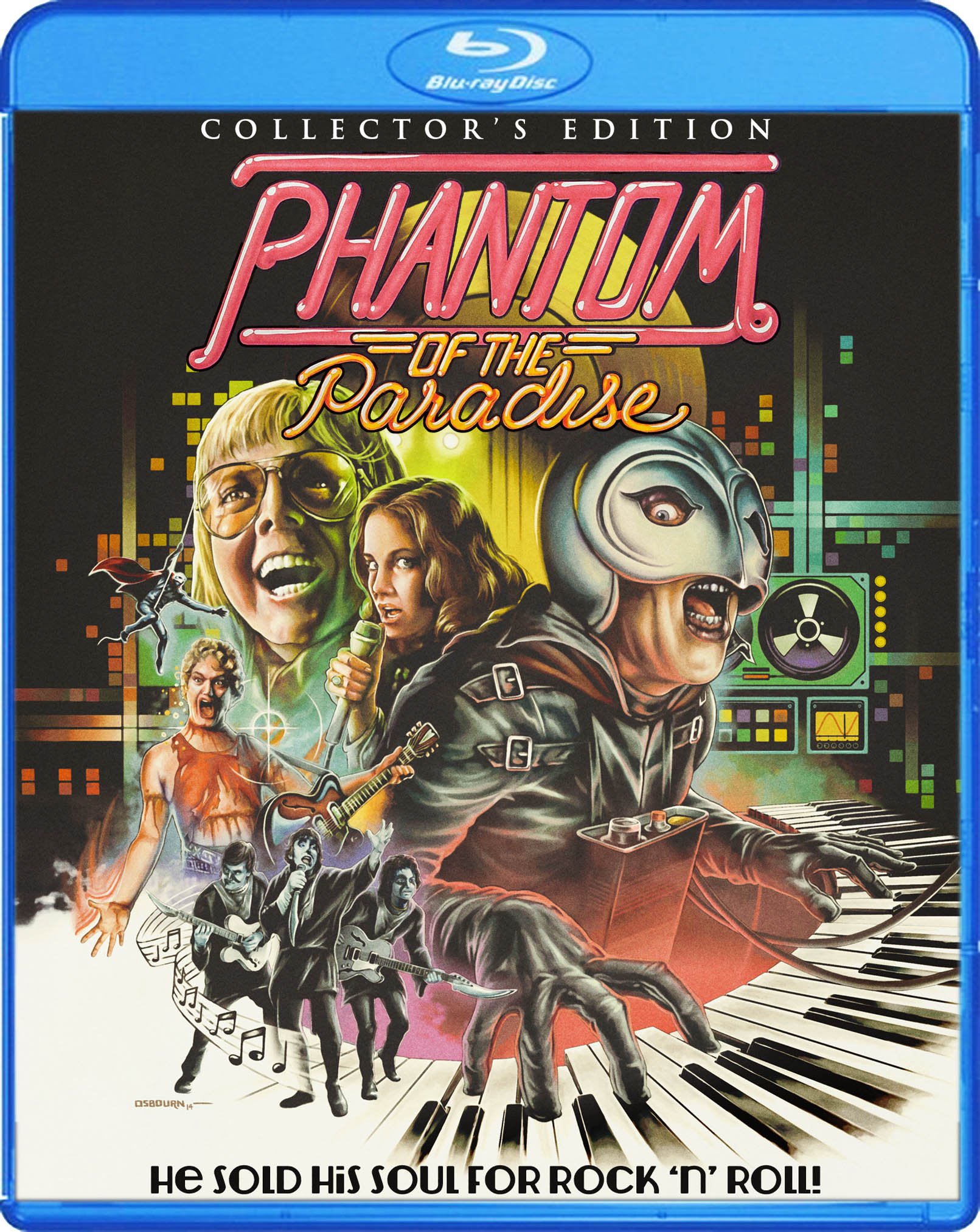 Brian De Palma’s Faustian fulmination against the soulless corporatization of art and artist, Phantom of the Paradise stands as the fullest expression of the filmmaker’s penchant for anti-establishment satire along the lines of Greetings and Hi, Mom! Excepting the occasional work-for-hire sop (Wise Guys) and studio-hamstrung misfire (The Bonfire of the Vanities), comedy would essentially take a back seat to voyeuristic thrills in De Palma’s subsequent body of work. Certainly, De Palma would never again mine this satirical vein with such incendiary results. That Phantom of the Paradise is also a full-on musical, complete with song-and-dance routines, only compounds the film’s inimical strangeness—and such wilful eccentricity is exacerbated by tonal fluctuations that manage to cohere finally into an unexpectedly poignant tragicomedy.

The story will doubtless sound familiar for anyone possessing a working knowledge of Marlowe, Goethe, or Mann: Aspiring songwriter Winslow Leach (De Palma mainstay William Finley) signs on the line which is dotted (in blood, natch) for satanic impresario and all-around Phil Spector stand-in Swan (Paul Williams), so that not even the love of talented songstress Phoenix (Jessica Harper) can save Winslow from giving the devil his due. For the uninitiated, the film helpfully spells out the situation by entitling Winslow’s purloined “rock cantata” Faust. After an unfortunate run-in with a record press, he dons an owlish steel helmet and runs amok at the Paradise. The Phantom’s ire is most expressly drawn by a preening glam rocker with a penchant for snakeskin suits and antler belts called Beef (the phenomenal Gerrit Graham), who really does a number on Winslow’s songs.

In addition to playing Swan, Paul Williams also composed the film’s musical numbers, and his songs are absolutely integral to the film’s ethical progression, by tracking the devolution of Winslow’s heartfelt anthems into vacuum-sealed pop pabulum. Williams does an admirable job conjuring up melodies at both ends of the spectrum. The ballad “Old Souls” is affective and ethereal, while the tunes “Goodbye, Eddie, Goodbye” and “Upholstery” respectively mimic (yet still make mockery of) the nostalgia porn of acts like Sha Na Na and the infectious auto-eroticism of the Beach Boys. The choreography of these numbers, credited to Harold Oblong (one of the trio of band members who recur throughout), stays loose and improvisatory, with plenty of room for comedic flourishes; a personal favorite occurs when the lead singer of the Juicy Fruits feigns tying off and shooting up with the mike.

Phantom of the Paradise doubles down on the winking intertextuality that has always characterized De Palma’s cheekiest work. The film’s broad-strokes indebtedness to its thematic forebears (Faust, The Phantom of the Opera, The Picture of Dorian Gray) is noticeable enough to be spotted through the blinkered monocular gaze of the Phantom’s helmet. And with its riotous Psycho “shower scene” riff, De Palma crams a plunger over the puss of detractors who dismissed him as little more than a discount-Hitchcock rehash slinger. But the finer-grained citations are there for the delectation of eagle-eyed cinephiles: The bomb in the trunk of the Beach Bums’ jalopy carries more than a Touch of Evil, and Swan’s attempted assassination of Phoenix on live TV sets its sights on John Frankenheimer’s scarily prescient The Manchurian Candidate.

That’s not to discount the finale’s profound resonance with other De Palma films. The orgiastic revelry of the wedding distinctly recalls Dionysus in ‘69; in fact, De Palma had members of that film’s cast planted among the extras to whip up their frenzy. And there’s more than a whiff of “Be Black, Baby” from Hi, Mom! in the scene’s avant-garde theatrical staging. Then again, the conflation of political assassination and public spectacle points to Blow Out, the one film that stands shoulder-to-shoulder with Phantom of the Paraside for the disconsolation of its final moments. This is De Palma pouring the new wine of his formal inventiveness and anti-authoritarian irreverence into the old bottles of archetypal myths, and it remains a supremely entertaining anomaly within his filmography, yet entirely emblematic of his filmmaking sensibilities.

Shout! Factory’s 1080p/AVC-encoded Blu-ray transfer looks and sounds smashing, effectively superseding Fox’s 2005 DVD release in every department. The ubiquitous reds, pinks, and blacks—a decidedly off-kilter color scheme that resulted from the tag-team efforts of DP Larry Pizer and production designer Jack Fisk—register with tantalizingly deep and rich color saturation, and there’s not an iota of crush discernible among those inky hues. Details are finely rendered, and grain levels look properly cinematic. Heightened resolution tends to draw undue attention to the wobbly travelling mattes that had to be inserted at the last minute to cover up the “Swan Song” logos and related signage, owing to a lawsuit from Led Zeppelin’s manager over usage rights. The Blu-ray disc offers two Master Audio tracks: 2.0 stereo and 5.1 surround. Clearly, the surround mix is the way to go here: Dialogue is presented cleanly and clearly throughout, and Paul Williams’s terrific songs will rock n’ roll your home theater setup like never before.

Phantom of the Paradise fanatics will rejoice in the sheer plenitude of supplements accumulated by Shout! Factory for their dual-format release, a few of which have been carried over from earlier international home-video editions, while many are new to this package. To kick things off, there are two audio commentary tracks. The cast commentary is composited from separate recordings, complete with a few seconds of inadvertent overlap at around the 71-minute mark. This production history-heavy track makes for an amiable listen, and among the highlights are the trio of musicians goofing around, Jessica Harper talking about singing on film versus performing live, and Gerrit Graham pointing out some intriguing tidbits about Larry Pizer’s cinematography. The other commentary track has production designer Jack Fisk going into a lot of technical detail about his contributions to the film. His comments tend to be doled out a bit more intermittently; with the film’s sound levels coming in full blast between anecdotes, it can make for a bit of a disorienting listen. The Blu-ray disc also contains on-camera interviews with Brian De Palma and Paul Williams. Always insightful (and equally blunt in his assessments), the director outlines the changes made in the script on its torturous journey from Phantom of the Fillmore to Phantom of the Paradise, and laments the disastrous lawsuits leveled against the film prior to its release.

The DVD contains “Paradise Regained,” an hour-long documentary rife with anecdotal recollections from cast and crew; thankfully there’s only slight overlap with the other extras in this regard. Guillermo del Toro conducts a terrific interview with Williams that covers the man’s entire career as actor and songwriter. Williams gets very personal and quite candid along the way. Elsewhere, drummer Gary Malaber talks about touring with Williams and how the band wound up in the film, Edward R. Pressman discusses collaborating with De Palma on Sisters and Phantom of the Paradise, and costume designer Rosanna Norton recollects with special vividness working with Graham on Beef’s wild outfits. Also included are a well-deserved featurette about the original poster designed by John Alvin with comments from his widow, Graham portentously reading his humorous “biographical” review of the soundtrack from the original press kit, and a priceless 30-second spot with William Finley hocking a really expensive Phantom action figure from Japan.

Fortunately for Phantom of the Paradise fanatics, they won’t need to sell their souls for Shout! Factory’s fantastic dual-format release, not even for “The Hell of It.”