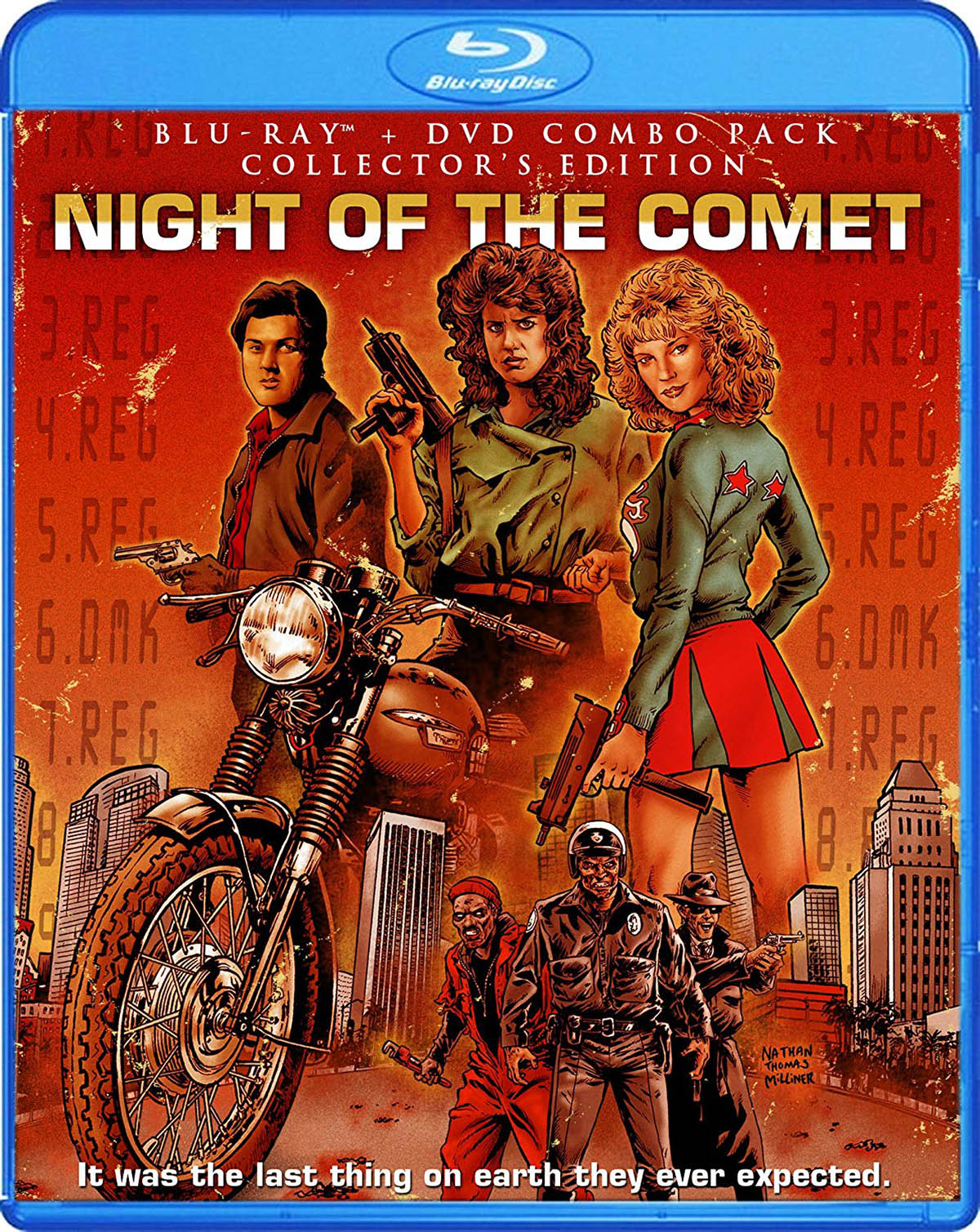 To what can we attribute the continued cult-film cachet that surrounds writer-director Thom Eberhardt’s unapologetically scrappy and endearingly enjoyable Night of the Comet? Certainly the answer’s not to be found in a scenario that reads like the bastard child of countless drive-in movies, in which most of humanity is instantly reduced to colored piles of dust when the Earth passes through the tail of a comet that last came around—you guessed it—right about the time the dinosaurs went belly-up. Then again, just so you know he’s not adhering too closely to generic procedures, Eberhardt irreverently elects a couple of pretty vacant valley girls—tomboyish arcade addict Reggie (Catherine Mary Stewart) and her blond cheerleader sister, Sam (Kelli Maroney)—and a Mexican truck driver, Hector (Robert Beltran), to stand in for the last remnants of humanity.

With regard to its bubbly protagonists, the film vacillates between poking not-so-gentle fun at their vapid mindset, as in the Dawn of the Dead-indebted shopping spree (obligingly scored to Cindi Lauper’s anthemic “Girls Just Want to Have Fun”), and taking them seriously as agents of their own destiny. Lucky for them, as it happens, that their hard-ass old man taught them how to shoot the shit out of an Uzi—and look adorable doing it. Even the ending splits the difference between reproach and respect. All duded up pretty as a postcard, Reggie and Hector and their prefab family unit (two tots they rescued from the nefarious scientists) appear to be destined for domestic bliss, while Sam seems set to head out on the highway alongside her dues-ex-machina love interest, who simply tools up out of the blue with a bitching ride and attitude to spare.

It also doesn’t hurt that Eberhardt filigrees his absurd premise with grace notes like the cheeky cinephilia informing early scenes set in an all-night movie theater. (The cleverest of them involves a poster for the Clark Gable-Jean Harlow vehicle Red Dust.) And since no self-respecting sci-fi/horror hybrid would be complete without its resident mad scientist, Eberhardt supplies an entire underground-dwelling cabal (led by veteran character actors Mary Woronov and Geoffrey Lewis) who are more concerned with finding a cure for comet exposure than they are in the fine points of human-rights debates.

While it would be unduly dismissive to write off Night of the Comet as a cult film merely by association, a good bit of its ancillary charm is obviously owing to its resonant casting choices: Reuniting Beltran and Woronov in the wake of Paul Bartel’s blistering black comedy Eating Raoul adds extra spice to the one longish scene they share. Dick Rude, memorably clueless as criminal wannabe Duke in Alex Cox’s punk noir Repo Man, turns up briefly as one of the renegade zombie stock boys. And look for Michael Bowen, Breaking Bad’s very own nepotistic neo-Nazi, Uncle Jack, as the doomed projectionist who beds down with Reggie while the world comes tumbling down around them.

Shout! Factory’s 1080p HD upgrade toNight of the Comet mostly marks a night-and-day improvement over the earlier (and extremely murky) MGM DVD. Colors are vibrant and deeply saturated, black levels solid, the image sharp and finely detailed throughout. The only cavil, however slight, is that there are more speckling and other artifacts on display than usual for a film of this period, even though their presence is only mildly distracting. There are two Master Audio tracks: a stereo upgrade of the original mono soundtrack, and a repurposed surround track that sticks mostly to the front channels, especially when it comes to the ‘80s pop-heavy soundtrack, with only a sporadic sense of immersion in some of the ambient effects work.

On-camera interviews with Catherine Mary Stewart, Kelli Maroney, and Robert Beltran focus largely on the casting process. Highlights include Maroney relating how she patterned Sam after Carole Lombard’s spoiled little sister in My Man Godfrey at writer-director Thom Eberhardt’s suggestion, and Robert Beltran talking about how playing Hector as just another stereotyped cholo would’ve been too similar to his title role in Eating Raoul. Makeup effects creator David B. Miller discusses working on the film hard on the heels of A Nightmare on Elm Street and how that shaped his creative process. Three separate commentary tracks exhaustively cover every aspect of the film from soup to nuts with surprisingly little overlap: Stewart and Maroney dig deeper into their memories of the film shoot, talk about how their characters are role models for young women, discuss the film’s long afterlife on cable TV, and describe interactions with their fandom. Eberhardt takes us through the film’s development from original script, through dealings with producers, and how the story’s final act significantly altered as a result. Production designer John Muto’s track is the most technically oriented and provides a fascinating glimpse into one aspect of film production that doesn’t necessarily get the sort of attention it warrants.

Night of the Comet blazes a trail onto Blu-ray with a stellar-looking 1080p transfer and a cornucopia of special features from Shout! Factory.