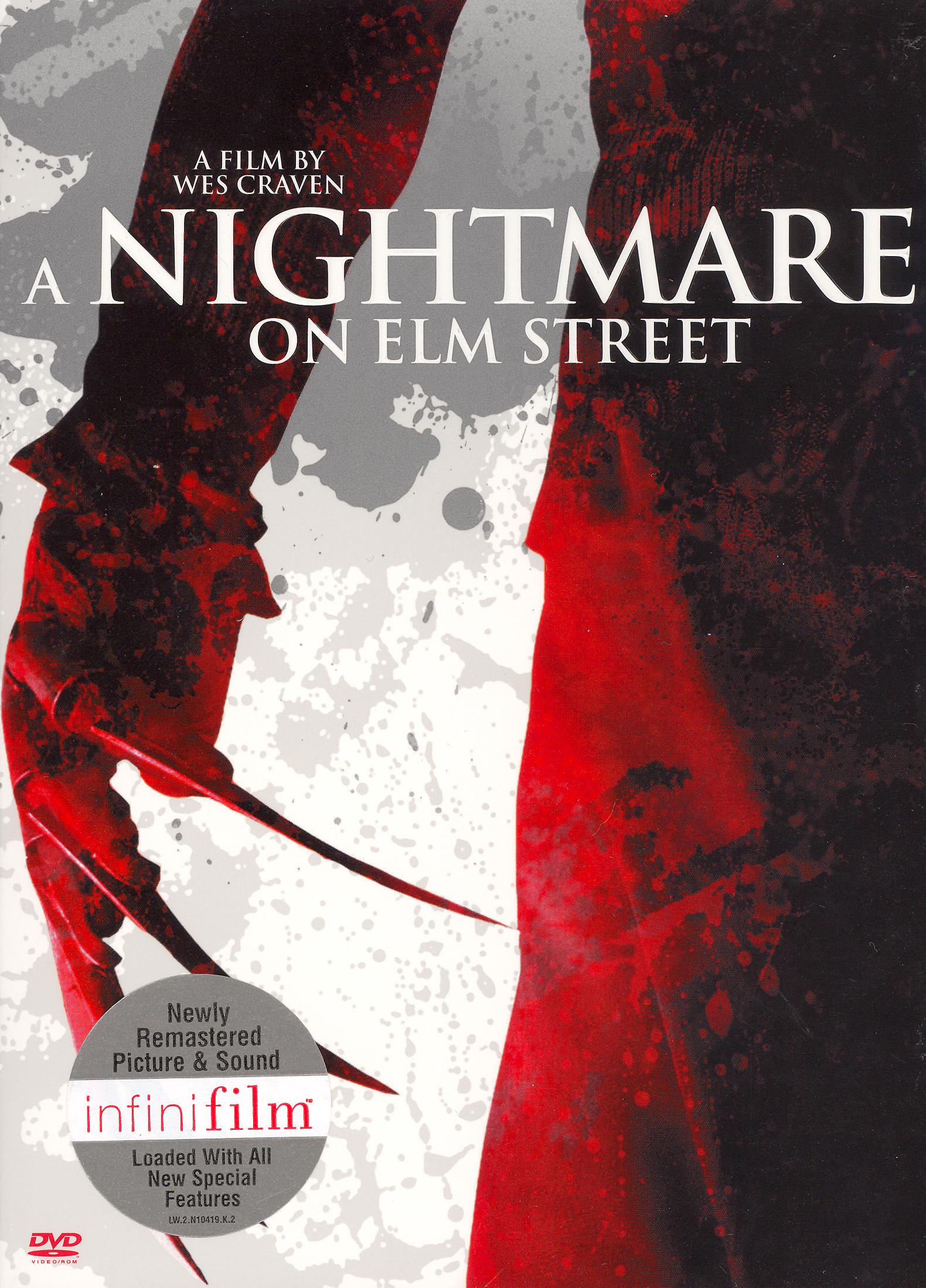 As perhaps the most influential horror film of the ‘80s (as well as one of the formative films of my youth), and yet consequently also the slasher flick most responsible for the genre’s decade-long degradation into self-conscious camp, A Nightmare on Elm Street is a movie defined by its dual legacies. Wes Craven’s gory tale of undead kiddie-killer Freddy Krueger and the teens he terrorizes via dreams was a slickly produced variation on Halloween’s return-of-the-repressed conceit that boasted empathetic lambs for the slaughter, an iconic villain, and an overabundance of twisted, horrifyingly surreal sights that effectively tapped into the link between carnality and death. “This…is God,” says Freddy (Robert Englund) while holding up his phallic finger razors during his first meeting with slutty Tina (Amanda Wyss), only to then perform faux-castration on his finger in order to let his internal yellow goo spurt—an instance of frighteningly sexualized imagery in tune with the slithering, cock-shaped sheet that strangles Lane (Jsu Garcia), the condom-like body bag that encases Tina during virgin Nancy’s (Heather Langenkamp) classroom dream, and the geyser of blood that erupts from the dark, hungry (vaginal) hole in Glen’s (Johnny Depp) bed.

Nightmare’s skill wasn’t that it invented such associations—which had already been thoroughly mined by its ‘70s predecessors—but that it refined them in uniquely disturbing ways, drenching itself in an atmosphere of unreality positioned somewhere between waking and slumbering states. It’s an ambiance aided by Craven’s deft editing, Charles Bernstein’s hauntingly jarring score and musical cues, and the film’s unforgettable children’s rhyme (“One, two, Freddy’s coming for you…”), and most convincingly realized during Nancy’s unconscious trip through her high school hallways (replete with a chilling hall monitor Freddy) and into the type of fiery basement where, it’s later revealed, Freddy the man was eradicated and Freddy the supernatural specter was born. Toss in the ultimate revelation that Freddy is really the byproduct of parental vigilantism—and thus akin to a demon scorned, determined to exact revenge against those who offed him—and the sense that Freddy’s intrusions into his victim’s nightmares are acts of subconsciously perpetrated rape, and Craven’s classic has enough anti-sex, anti-parent, mass-psychosis undercurrents to keep it relevant for decades, even as time and scores of subsequent, inferior Freddy outings slowly chip away at its once shocking scares.

While Craven is only partially to blame for allowing the Nightmare franchise to fall into junky sequel disrepute—after disliking the studio-mandated request for a twist ending, he reportedly cut ties with its follow-up—Freddy’s eventual transformation from malevolent monster to quip-spouting joke nonetheless irrevocably sullied the original’s impact, its central fiend sapped of his terrifying deviance (epitomized by his perverted wagging tongue) by awareness of his forthcoming penchant for corny one-liners. In and of itself, this series devolution into goofiness was dispiriting. Worse, however, is that the success of Freddy’s maiden voyage (which more or less single-handedly put neophyte New Line Cinema on the map) led to an unfortunate era of tongue-in-cheek mainstream horror films in which bad puns and wink-wink kills became the norm. And thus despite Nightmare’s enduring portrait of believable teendom (from Langenkamp’s feisty heroine to the debuting Depp’s bland cuteness), its bizarre vision of adulthood (with John Saxon’s standard-issue daddy cop overshadowed by Ronee Blakley’s creepily spaced-out mom), and its resonant argument in favor of parent-child truthfulness, it also, regrettably, must be held responsible for amusing but distinctly un-horrifying trash like Child’s Play and Dr. Giggles.

The 1.85:1 anamorphic widescreen transfer is a significant step up from the one found on New Line’s (now out-of-print) 1999 disc, boasting less print blemishes and edge enhancement (the latter of which has now been almost completely eradicated from the image), impressive black levels, and just enough grain to give the picture a polished, film-like quality. Only some blocky artifacting during night scenes prevents it from being truly great. While neither the new Dolby Digital 5.1 EX nor the DTS 6.1 ES tracks are mind-blowing, both do about as much as possible with the original audio, with the synth-heavy soundtrack boasting enveloping surround effects and great clarity. If push comes to shove, go with the DTS option, mostly because of its richer, more powerful bass. And for purists, the original mono soundtrack is also included.

New Line’s two-disc Infinifilm set is overflowing with goodies, even though it rehashes quite a bit of its content over both discs. On disc one, director Wes Craven, stars Heather Langenkamp and John Saxon, and cinematographer Jacques Haitkin have their separately recorded remarks edited together for a new commentary track that, when compared with the commentary originally recorded for the 1999 DVD release (which featured Craven, Langenkamp, and Saxon, and is included here for good measure), offers less rambling anecdotes and more focused, insightful, chronologically ordered observations about the film’s production and themes. Also included on the first disc are the Infinifilm features, which involve watching the film with a text-based trivia track and/or visual prompts that direct viewers, at key moments, to various featurettes. Much of the content from those featurettes can be accessed separately on the second disc, which houses a host of new mini-docs that cover the film’s role in establishing New Line Cinema (“The House That Freddy Built: The Legacy of New Line Horror”), the production (“Never Sleep Again: The Making of A Nightmare on Elm Street”), and the history of dream analysis (“Night Terrors: The Origins of Wes Craven’s Nightmares”). At close to two hours, they do an excellent job complementing the two commentary tracks. Three alternate endings prove to be only slightly “alternate” in nature, exhibiting only minor differences from the film’s actual conclusion. The Freddy’s Coming For You Trivia Challenge, the original theatrical trailer, and four other New Line trailers round out this stuffed package, though for those who still bother with DVD-ROM stuff, there are even more extras to savor, including another trivia game and a feature that allows one to read the script while watching the film.