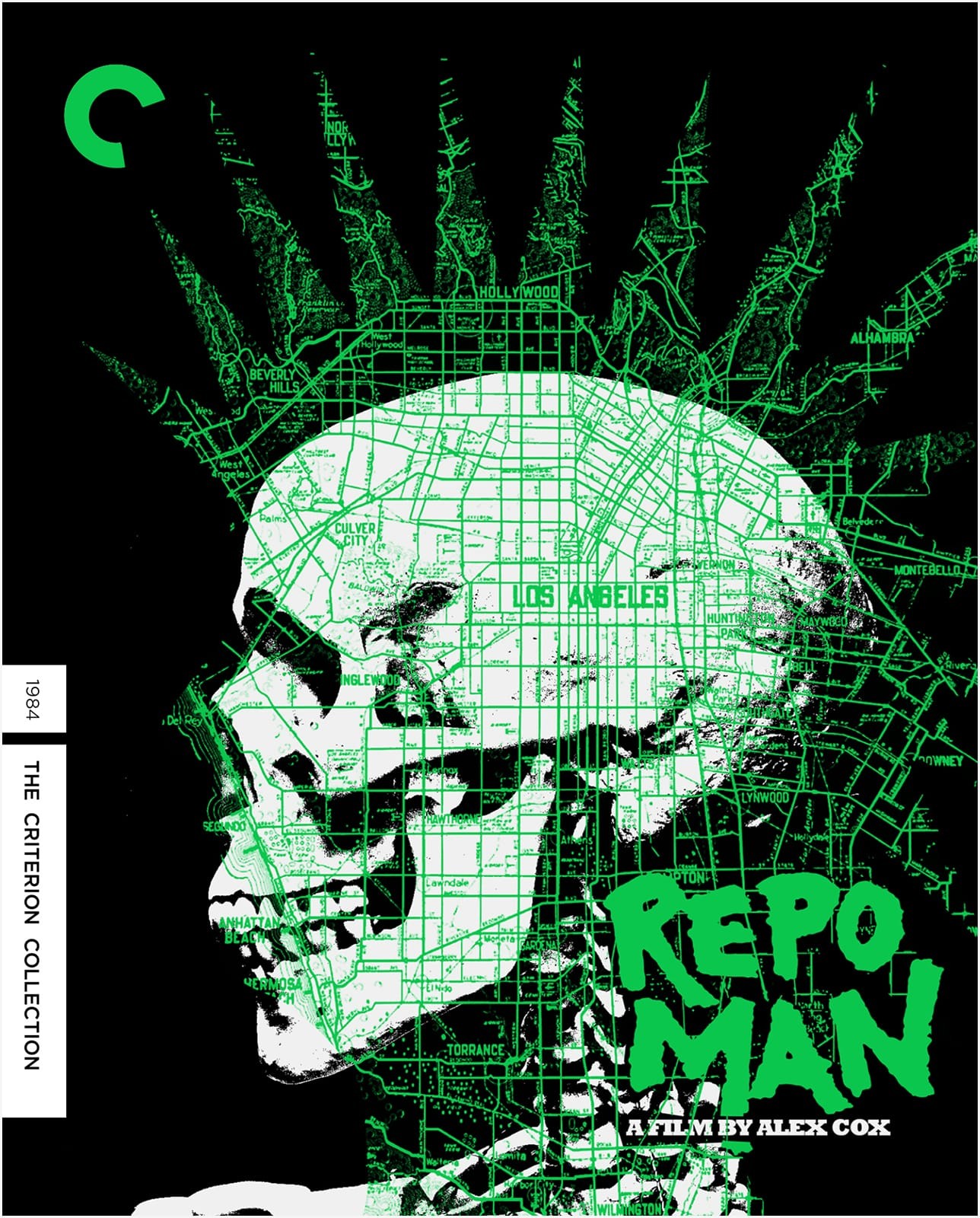 Pressed, it’s hard to think of five American studio pictures as original as Repo Man. The utter weirdness of Alex Cox’s remarkable debut—a document of L.A.’s hardcore punk scene that’s also an ode to its car culture, a critique of the American middle class, and a kind-of sci-fi comedy about a radioactive Chevy Malibu—would seem to preclude its existence. And yet here it is. Nearly 30 years later, Repo Man is no worse for the wear. Not so much ahead of its time as outside of it, the film’s L.A. punk particularities have broadened over the years. Its ennui has endured not just as a portrait of a certain generation of angry adolescents, but as one of angry adolescence writ large. In a way, the film’s timelessness has always been assured by Cox’s restless protagonist, Emilio Estevez’s suburban punk-cum-repossession agent Otto, who’s always seemed like a bit of a nonentity.

As much as Repo Man’s cult cache may be indebted to its perceived closeness to the SoCal hardcore scene of the early ‘80s (the film was originally resurrected theatrically six months after its original run when its soundtrack album topped 50,000 in sales), Cox treats the film’s punks with an odd mix of tenderness and derision. The mohawked goons sound like jocks and look like they wandered off the set of Class of 1984; now-legendary L.A. punks the Circle Jerks appear as a sedate lounge act (“I can’t believe I used to like these guys,” Otto sneers); kids slamdance in an deserted lot where there’s no visible band, like a hardcore Club Silencio.

Against the dullness of mid-‘80s American suburbia, Otto’s self-interested vacuity and directionless rage scan as legitimate, inversely purposeful reactions. The sight of Otto squatted by an overpass, angrily chugging a beer by himself, yelling the lyrics to Black Flag’s “TV Party” (themselves mostly just names of primetime shows of the time) while the Plugz’s soundtrack twangs in the background offers an inspired connection between brooding of-the-era teenage malaise to the grandest tradition of American aimlessness: capitalist expansion bumping up against the nation’s natural borders, manifest destiny running on fumes.

Otto seems to float outside all of this. He’s too pissed-off and empty to compellingly embrace the scene beyond its facility to get him laid, bucking any convincing punk ethos when presented the opportunity of dressing “straight” and beginning a new career recouping cars from anyone who’s fallen behind on their payments. Yet his nihilism—even his dickheadedness—feel earned, beset as he is on one side by “ordinary fuckin’ people” like his pothead Christian parents and on the other by the delinquent dummies he awkwardly pals around with early in the film. In Repo Man, only the affectless (as embodied by Otto) and the faithfully world-weary (as embodied by Harry Dean Stanton’s bedraggled mentor) register as valid. Everyone else around them appears curiously alien—quite literally, as the film progresses.

Repo Man’s critique of its era’s swirling dynamic of excesses and emptiness, and its tendency to engender this alienation, may seem a bit reactionary and adolescent. Yet it remains potent when apprehended in this very energetic, adolescent naïveté. As in John Carpenter’s They Live, another great L.A. film shouldered by a cipher hero (Roddy Piper’s “Nada” drifter), Repo Man’s boneheaded ideological obviousness only endears it further to the susceptible viewer. Bland white-and-blue cans labeled “lite beer” and “yellow cling sliced peaches” may seem like blunderingly flagrant critiques of capital, but their blatancy is only commensurate with the brazenness of capital itself. Like the sunglasses in Carpenter’s film that magically demystify the existent authoritarian infrastructure by stripping it to its scaffolding, peeling the flesh from the well-dressed power bloc and paring down mock-complex billboards to marching order edicts like “CONSUME” and “OBEY,” Repo Man’s extra-barefaced signposts are in place to productively hail a generation that’s been beaten down under the boot heel of obviousness.

It’s fitting, then, that after Otto has seamlessly transitioned from agent of the rebellious punk-rock counterculture to cowboy-creditor freelancing for the Man, he’s left with no real endgame alternative but to drop out of society altogether, ditching his friends, co-workers, and his girl (Olivia Barash) and taking off into the night in the extraterrestrial Malibu with Tracey Walter’s screwy mechanic. It’s the film’s most cathartically surreal gesture, evoking the stupidly goofball flying-car finale of Grease, but its improbability feels coherent with a film that makes a consistent virtue of its leftfield eccentricity. Having traipsed L.A.’s parking lots, cul-de-sacs, and craggy underpasses on foot, then raced along its serpentine highways in hotwired cars, Otto deserves his god’s-eye-view flyby. Taking it all in from the passenger seat of the glowing, airborne Chevy, Otto seems to intuitively comprehend this perfected top-down grasp of urban and suburban experience, responding the only way he knows how: “Intense.”

It’s always a bit odd to see a cult film like this, originally distributed in the tape-trading underground via bootleg VHS copies, so pristinely cleaned up. Criterion brings their usual finicky attentiveness to Repo Man’s high-def release, scrubbing the image of much of the scratches and noise that marked previous home-video releases. The colors are so sharp that, were it not for the dated hairstyles and the fresh-faced mug of young Emilio Estevez, you’d be forgiven for confusing it for a new release. The soundtrack, though presented in 1.0 mono, is nonetheless comparably superb, offering crisp dialogue and clearly capturing the music so essential to the film’s appeal. When Iggy Pop’s theme music kicks in over Repo Man’s opening credits, it’s loud enough to make you physically excited to watch it.

Again, as per the Criterion standard, it’s loaded. Some features are resurrected from earlier video releases (the commentary, featuring Alex Cox, producer Michael Nesmith, and a handful of the cast, is the same as the one packaged with Anchor Bay’s 1999 DVD release). Other pieces, like interviews with Keith Morris of the Circle Jerks work to further the cement the film’s ties to L.A.’s mid-‘80s hardcore scene. In one interview, titled “Harry Zen Stanton,” the venerable actor is grilled by producer Peter McCarthy on his career, only to offer up a suitably nihilistic (or, sure, “zen”) worldview based on fatalism and predetermination. One feature, “Repossessed,” and a comic illustrated by Cox in the accompanying booklet, explore the film’s production history in detail. The real gem here is the inclusion of the film’s “TV version,” Cox’s own drastically edited version of the film, designed to make it suitable for broadcast viewing. For anyone who ever caught the film in this context, this cut is its own differently memorable cult artifact, especially noteworthy for all the creatively cleaned-up swearing, where “Fuck you, you goddamn motherfucker” becomes “Flip you, you good down melon farmer.”

With their immaculate rerelease of Alex Cox’s astoundingly original debut, Criterion not only further verifies their dedication to streams of both classic and cult films, but effectively (and correctly) resuscitates a cult object as a certifiable classic.