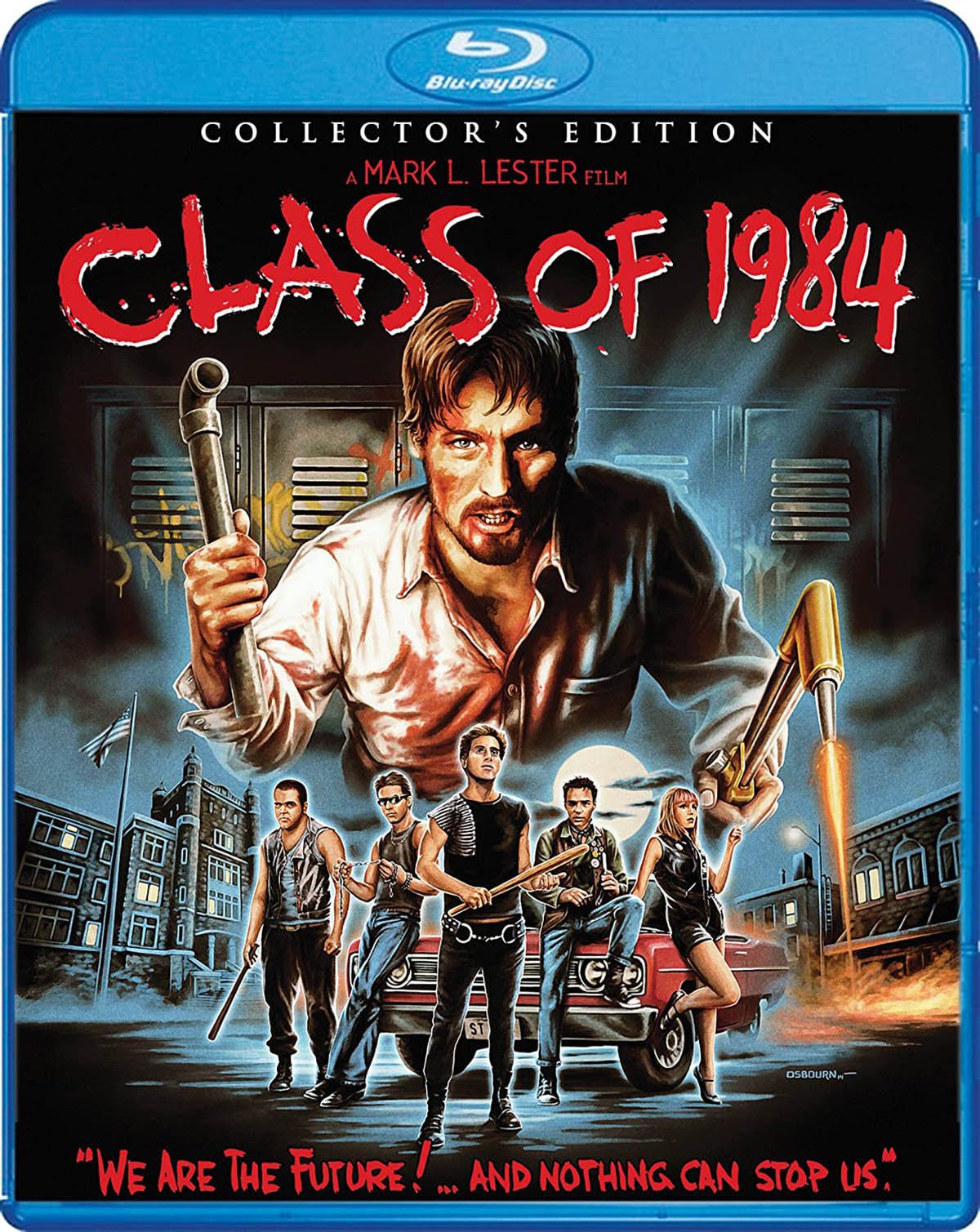 The poster for Class of 1984 memorably features a group of presumable hoodlums (one can tell by their leather pants and, in one person’s case, their mohawk) confrontationally posing for the viewer, accompanied by the tagline “We are the future! And nothing can stop us.” But the film itself is rooted firmly in the past of genre movies. The story, which would be reiterated by many subsequent movies concerned with besieged high schools, follows naïve music teacher Andrew Norris (Perry King) as he gradually comes to realize what the audience will immediately accept as a given: that he’s been recruited to work in an inner-city wasteland that’s ruled by the kids, who are, of course, untouchable because bureaucrats would rather prosecute the victims than the aggressors. It’s a classic revenge-movie scenario that, in this case, blends The Blackboard Jungle and Death Wish together with some faint suggestions of Rock ‘n’ Roll High School tossed into the mix in a gesture of topicality.

It’s the Rock ‘n’ High School element that sticks out in this oddly retrograde attempt at fashioning something outré. Like that film, Class of 1984 is partially occupied with the aesthetic of the then-blossoming punk movement, featuring a performance by the Canadian band Teenage Head, as well as villains who’re into chains and theatrical makeup in addition to the aforementioned leather. But there’s something squarely presentational about these ’84 delinquents, who commit evil acts with all the sense of verisimilitude of a greaser from a 1950s cruiser film or a stoner from Reefer Madness. There’s no chaos. The gang is organized, holding auditions for their prostitution ring in the back office of an underground club in a manner that’s not all the dissimilar from a producer holding a casting call for a staging of Fame, and their drug use is fake-blunt, particularly in the case of one henchman who shoots up as casually as one might light a stogie.

There are signs that Class of 1984 is aware of its ludicrousness and has a sense of humor about it. The teachers’ blasé resignation to the carnage around them is writ as cartoonish as the gang’s initial hijinks, especially as it’s embodied by the biology instructor who’s peerlessly played by Roddy McDowell in the role of Roddy McDowell, the classy gentleman who’s anachronistically stranded in a low-rent lot with a bunch of chowder-heads. And the leader of the gang, Peter Stegman (future TV director Timothy Van Patten), nearly scans as harmlessly white-bread as Norris, boasting classical piano chops and a comical lack of menace that’s probably intentional, especially considering the (clever) revelation that he’s a yuppie playing at this gang thing out of boredom and class contempt. (Why punks would ever follow Stegman is but one of the narrative’s many obvious incongruities.)

The film eventually turns violent though, after an ugly rape scene that’s seemingly required of any vigilante film made in the 1970s or early 1980s, signaling a tonal shift that never really gels with the comedic faux nihilism that’s preceded it. The jarring change of moods, characteristic of exploitation films, gives Class of 1984 a needed shot of energy, but director Mark Lester doesn’t stage the conventional thriller scenes with the visceral snap that he’d later bring to the carnage of Commando and Showdown in Little Tokyo. There’s a good buzz-saw gag, but even this bit is marked by a problem that’s symbolic of the issue that hangs over the entire movie: It isn’t messy enough. The film doesn’t quite have the verve of a great midnight movie.

The image boasts strong clarity, particularly in the background of the frame, though an attractive somewhat grainy softness remains. Color intensity is memorably superb: Check those reds in the school-hall scenes near the end of the film, and the grays that are prominent throughout. The two soundtracks are clear and nuanced, not just in the big set pieces, but also in the quieter scenes that subtly establish the high school’s geography aurally, with diegetic sounds that track students moving within various planes of the frame. An attractive transfer that doesn’t interfere too much with the film’s rough-hewn charms.

In his interviews and audio commentary, director Mark Lester repeatedly asserts that Class of 1984 is a shocking and prescient study of the American educational system, and certain reviews at the time shared this viewpoint. Lester’s aware that his film is tame nowadays in comparison to the news and to considerably more violent thrillers, and holds this desensitization as further proof of his work’s social legitimacy. It’s dangerous, and potentially smug and unfair, to judge art retrospectively divorced of its time, but it’s hard for this critic to entertain the notion that Class of 1984 was ever anything other than trash that shrewdly utilized a topical pressure point. Lester, by his own admission, is more informed by prior films than by political awareness, and his misplaced homages often make for forced, ham-handed cinema (particularly a shout-out to The Godfather, in which the gang’s leader entertains offers and auditions hookers in the manner of a pip-squeak don). Old movie references and punk, in this case, do not mix gracefully. Still, Lester’s conviction is admirable, and he makes for an interesting listen. A long interview with Perry King offers a fascinating portrait of a below-the-radar career actor who’s worked with a long list of legends, and a variety of other interviews with assorted actors supply engaging production vignettes. TV spots, the theatrical trailer, and a stills gallery round out a solid supplemental package.

Class of 1984 reminds us once again that outrage often leads with the passage of time to nostalgia. The film is overrated by its cult, but has its charms, which are well represented by this attractive and reverent package.