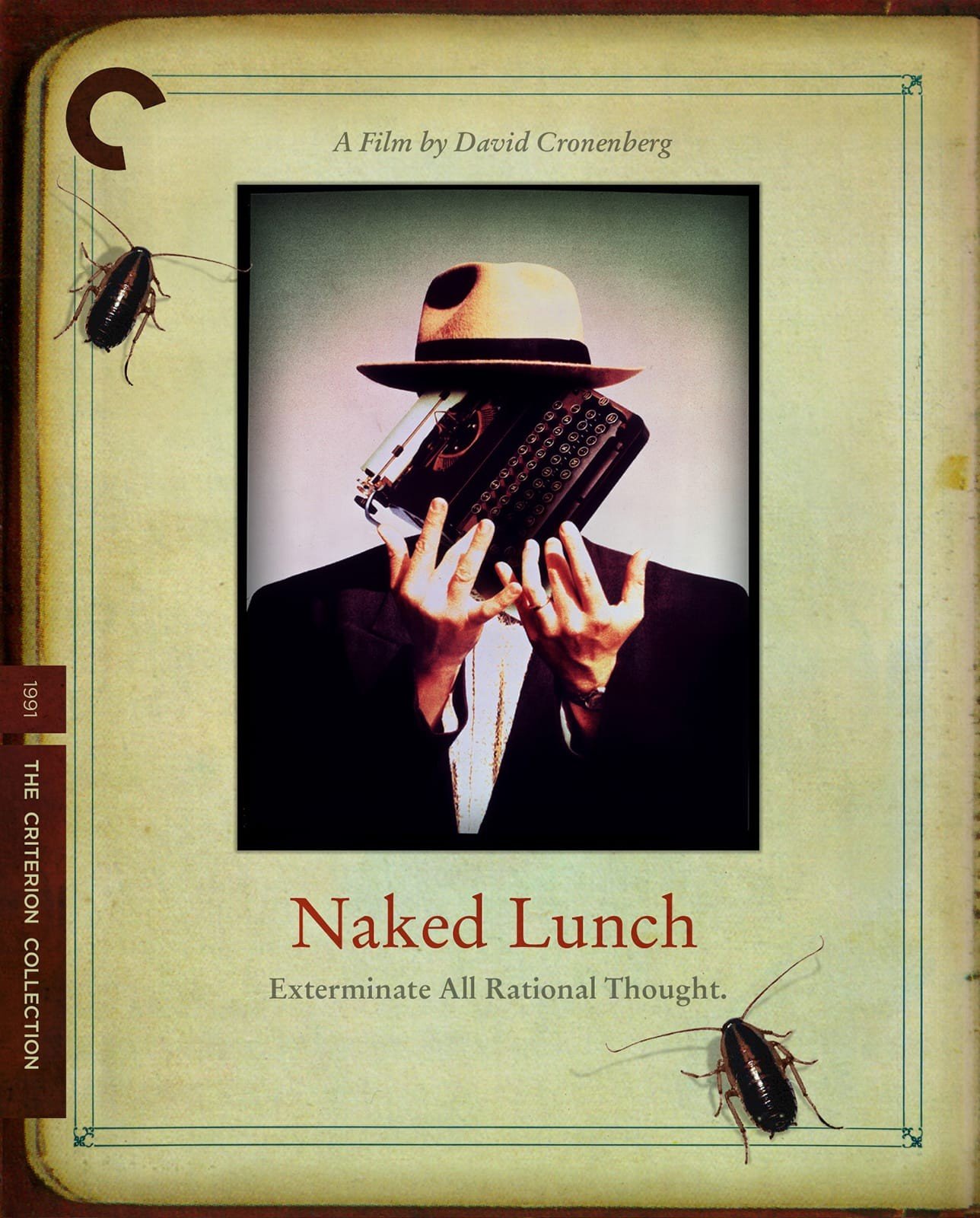 David Cronenberg’s Naked Lunch is a surreal experience that’s heightened further by disguising itself within a veneer of classical stateliness (“an agent hiding in a larval state,” Roy Scheider’s insidious Dr. Benway might say), a prodigious tonal achievement that blurs reality and the hallucinatory from the moment Peter Weller’s William Lee follows his junkie wife’s lead and shoots up his professional-grade cockroach-killing bug powder. An early diner conversation between the film’s trio of literary figures might represent Cronenberg’s own commentary on the film’s creative process. Hank (Nicholas Campbell) and Martin (Michael Zelniker), stand-ins for Jack Kerouac and Allen Ginsberg, respectively, debate the merits of writing spontaneously versus editing and rewriting, to which William, one of William S. Burrough’s pseudonyms, offers his own conclusion: “Exterminate all rational thought.” The film marries Cronenberg’s renowned on-set improvisation with what amounts to a miraculous balancing act between the cinematic and the literary, fiction and nonfiction, creative and destructive urges, and even Cronenberg and Burroughs’s dueling sexualities. Here, the director’s trademark obsessions aid in maximizing the spirit of Burroughs’s eponymous, “unfilmable” novel. Which brings us to the talking assholes.

Naked Lunch drips with metaphors both obvious and layered, from the toxicity of drug addiction to Judy Davis’s dual roles as Burroughs’s late wife, Joan Lee, and subsequent love interest, Joan Frost (a character based off writer Jane Bowles), and the pervasiveness of alternate representations and coded meanings aids in creating the sensation that nothing is as it seems. The film’s aggressive rejection of logic achieves a self-contained rhyme and reason as Lee slips in and out of hallucinations in which he thinks of himself as a secret agent working for the loosely defined organization Interzone. Lee’s bisexuality goes almost uncommented on (in keeping with Burroughs’s own thoughts, gender proves almost incidental amid the film’s many carnal relations), and the abundance of disturbing imagery (orifice-laden typewriters that pulsate like the television in Videodrome, horny humanoid centipedes, and a flowery, gyrating “sex blob” capable of non-masturbatory sex with itself) bypasses anything like eroticism to reveal a deeper investigation of personal hell, one hinged on sin, guilt, and an obsessiveness that leads to a cyclical destruction. You don’t need experience with hard drugs to relate, only an appreciation for the personal conflict and self-destruction that often accompanies the creative urge. As Jonathan Rosenbaum put it, it might be the film about writing.

Criterion’s 2003 DVD set offered a then top-of-the-line presentation of this beautiful film, and this 1080p transfer delivers an equally prodigious experience. The 1950s period browns and reds are stunning, image flaws are nonexistent, and the expert puppetry at work in the film’s many Interzone agents holds up beautifully. The jazzy audio track is equally impressive, despite only being available in 2.0; note the marketplace sequences, in which Howard Shore’s music dances in the background like a swarm of insects while multiple conversations overlap with stunning distinction.

Supplements have been ported over from the DVD set, which is no cause for concern given their fairly comprehensive nature. David Cronenberg and Peter Weller’s informative and entertaining audio commentary is a must-listen; the two were recorded separately, but the whole piece is so well edited that it’s unlikely you’ll mind. “Naked Making Lunch” is a 1991 documentary produced for The South Banks Show, and runs a healthy 48 minutes. Three image galleries provide some highlights from the film’s conceptual stages and production (Burroughs “meeting” a Mugwump is tops), the design of the film’s buggy creations, and archival photographs taken by Allen Ginsberg of William S. Burroughs. A handful of marketing relics include a six-minute featurette, TV spots, a montage of production footage, and a trailer that’s unusual in that it respects an intelligent audience and that Cronenberg himself found to be “audacious and intelligent.” The crown jewel may well be “William Burroughs Reads Naked Lunch,” a book-on-tape excerpt that runs for more than an hour and includes musical accompaniment. Rounding out the package is a beautiful 40-page booklet that includes original reviews and hindsight essays on the film.